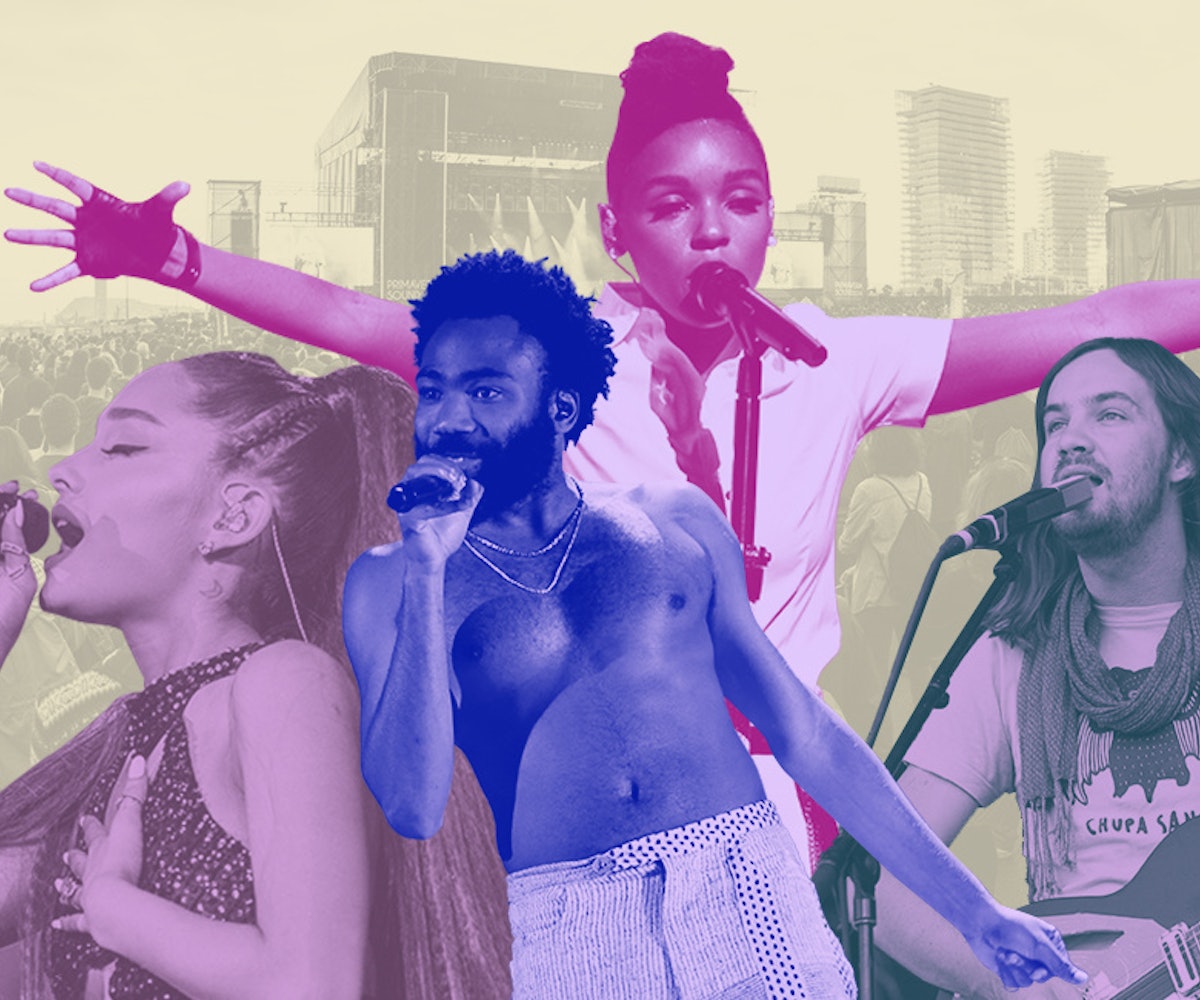 I think we can all agree that some of the lineups for last year's festivals were, erm, rough. If it wasn't bad enough that so many of them featured the same main acts, many were seriously lacking diversity and featured very few women, especially in the top slated spots. (Beyoncé at Coachella being a notable exception.)

If you're having a hard time visualizing just how bad the situation was, Lily Allen made it clear when she posted an edited version of the Wireless Festival lineup last year, with every male artist's name erased, leaving only three names left.

Soon after, music lovers across the internet shared similar images using other festival lineups to reveal just how few women actually were playing the festival circuit, and it was hard to deny that there needed to be a big change. As Pitchfork reported last February, 45 large festivals across the globe then agreed to achieve quantifiable gender equity in lineups by 2022—with only two festivals located in the U.S. agreeing to those terms, unfortunately. But, Barcelona's Primavera Sound didn't wait for 2022, applying the equity rule starting in 2019 with an absolutely killer lineup.

We're still a while away from knowing exactly who will be playing at every single festival, but there are already clear standouts across the globe that have curated unique lineups and/or placed many women amongst the highest ranks. Check out some of the most impressive lineups below.

I haven't looked at this lineup once without wheezing from excitement, and it's not just because more than 50 percent of the artists are women. There are quite a few stan-worthy artists on here on literally every horizontal line, with Solange, Cupcakke, Cardi B, Carly Rae Jepsen, Janelle Monáe, and more—if I listed everyone worth listing there'd be no point, I'd just be restating the majority of the poster above.

While Coachella usually opts to put a legacy act in a headlining spot, this year it's all about the who's who of 2019. And then too, Blackpink is making history as the first K-pop girl group to perform at the festival, and many big names in Latin music including J Balvin, Rosalía, and Bad Bunny are spread out across both weekends.

Run by my lesbian country queen Brandi Carlile (who is also nominated for six Grammy Awards this year!!!), Girls Just Wanna Weekend is a festival slash all-inclusive stay at a resort, so forget the nasty exhaustion and sweat and bug bites of basically every other festival. Carlile noticed the tendency for festivals to be male-dominated, so she made sure her big event was the exact opposite, featuring only musicians who also happened to be women. Sign me up PLEASE.

Treefort's lineup poster may feel like an eye exam, but it's with good reason! Peek down past the bigger names (Liz Phair, Tigers Jaw, and Rituals of Mine, hell yeah), and you'll notice an unparalleled assortment of buzzy names like Japanese "Neo-Kawaii" act Chai and proto-prog trio Pinky Pinky.

Some of the best festivals are short but sweet. Camp Cope, Jorja Smith, Mitski, and Florence + The Machine all on the same bill? It seems too good to be true, especially packing them all into a single day.

Did you ever think you'd see a day where Robyn and The Cure co-headlined?

If you needed the perfect excuse to escape to Iceland for a weekend, it's seeing Rita Ora and Pussy Riot headline (and, you know, see the rest of the gorgeous destination).

The headliners are not the most gender-balanced, but if you told eighth-grade me that I'd be able to see Panic! At The Disco play such a big show all these years later, I would have called you a liar. Acts billed a little lower like King Princess, Snail Mail, and Jessie Reyez almost make up for the lack of women up top, but hopefully in the future Firefly will do better for even the names they type in the largest font.

The lineup for Reading and Leeds is pretty bare-bones (there are more acts waiting to be announced), but it's still pretty impressive. 20GayTeen has come and passed, but 20BiTeen is here, and Hayley Kiyoko will still have my heart even after.

Lolla is headed to Sweden for the first time ever, and the inaugural lineup sure doesn't disappoint. Lana Del Rey and Bring Me The Horizon would really play well on my 2012 Tumblr blog, and I'm absolutely living for this strange genre juxtaposition in 2019.