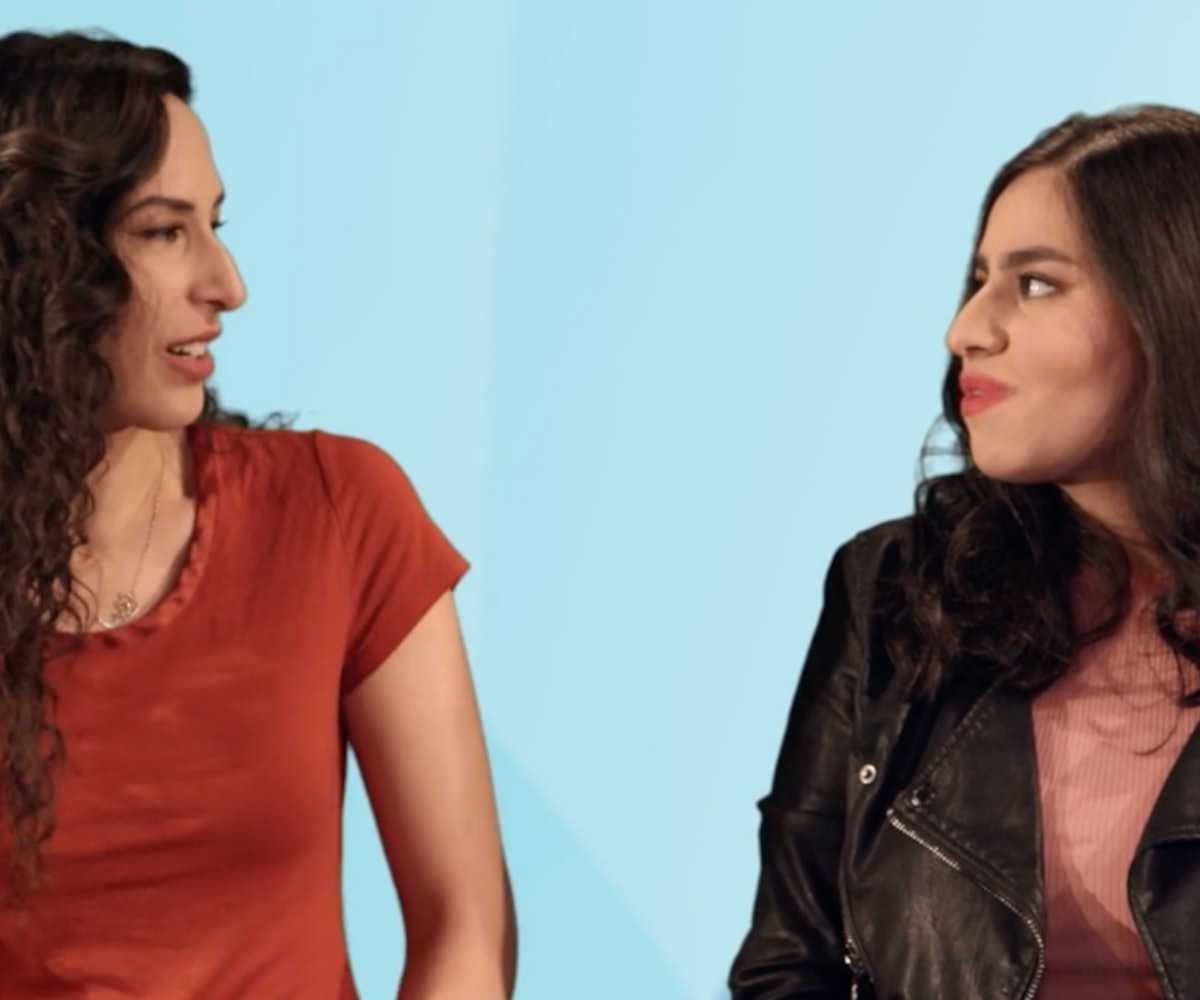 The idea for the new web series "Muslim Girls DTF" started from a tweet sent out by actress Aizzah Fatima. It went something like this: "Hey, writers and others—you know who you are—stop writing female characters named Fatima in a hijab." Not long after, comedians and comedy writers and tons more people started liking and tagging one another under the post. It racked up so many replies that Fatima took the conversation offline with some of the respondents. "We decided to meet up and just talk about stuff," Fatima told us, explaining that she and the women she met up with decided to create a series of videos, the idea being: "If people know we exist, then people will know there's a pool of Muslim women out there who write and who they can hire to write stories, so that characters can be named not Fatima." A year later, "Muslim Girls DTF" was born.

Fatima has experienced the frustration regarding the singularity of Muslim characters firsthand. She told us she's auditioned for and read scripts for at least 10 roles that traffic in Muslim stereotypes in the past year: "She wears a hijab, she takes it off… I feel like the image of the Muslim woman is always battered, abused. It's the same story." She tells us about a recent audition, which requested an actress who could speak fluent Arabic. Fatima's agent sent it to her, but Fatima realized immediately it was problematic, because, she explained, the role called for someone from Sudan, and she says: "Sudanese people are black. I am not black. I'm brown, very much not black."

However, Fatima went on the audition anyway (she says it was conducted by a room full of white men), and she booked the job. She had her doubts about doing it, though, and talked to her agent and other people on the crew with whom she'd worked before. The people in wardrobe told her that they brought up the issue to the producers, but that the producers didn't see it as a problem. And her agent told Fatima: "Don't worry about it. Just go in and do it. We can't be so precious, because you've got to build your resume right now. That's just where you are."

It was a lesson learned, she says and one she hopes she doesn't have to go through anymore. "Honestly, since filming that, I've just had this big mental shift where I'm like, Okay, I will never go out for a role like that again." These instances are also exactly why Muslim Girls DTF is so necessary, she says. "The only way things will change is if we start creating our own content to show people that there's more than just one kind of Muslim woman in the world."

For the web series, there are at least eight Muslim women represented, including Negin Farsad, Maysoon Zayid, Nina Kharoufeh, Nadia P. Manzoor, and more, all with different upbringings and perspectives. The topics they cover range from fasting and not eating pork to body hair and dating—for the most part, "things everybody can relate to," Fatima says. "But also we're going to just show people all the gamut of diversity that exists within the Muslim-American female population." The conversations are mostly approached with humor (think, like, MTV's Girl Code), but Fatima says there are times when they turn more serious. "People talk about various forms of racism that are out there, within our community and outside of our community," she says. "And how the representation of Muslims in the media is shit. And there's only so much you can joke about that, because it's a very serious problem right now."

As for the name of the series, Fatima tells us that it came from a brainstorm between her and the group of ladies that appear in the clips. "We were like, 'Well, should we call it Muslim Women's Voices? Muslim Women Talk Back?'" Fatima recalls. "A bunch of bad ideas came out." Then, her co-creator Atheer Yacoub yelled out her suggestion: "Muslim Women Fuck!" As you can see, they ended up going with a variation of that, except their version of "DTF" stands for "Discuss Their Faith" rather than the typical "Down To Fuck." Though it can be interpreted as that, too. That's kind of the point.

"Muslim women who like to fuck, where's that story?" Fatima asks. "Because they exist, I'm definitely one of them. Why aren't more of us talking about this?" So, she and her crew are here to talk about it (sex) and a lot more. "We wanted to show a different side of Muslim women that isn't reflected in the media," Yacoub says. "There aren't really shows starring Muslim women or anyone telling our stories... So we wanted to create something for ourselves."

In doing so, maybe people will stop thinking of Muslim women as anything other than regular women, adds Fatima. "I hope that they start to see these people that are always portrayed as the 'other' and 'foreign' as something that's also a part of them. You know, that Muslim women are a part of the American fabric."