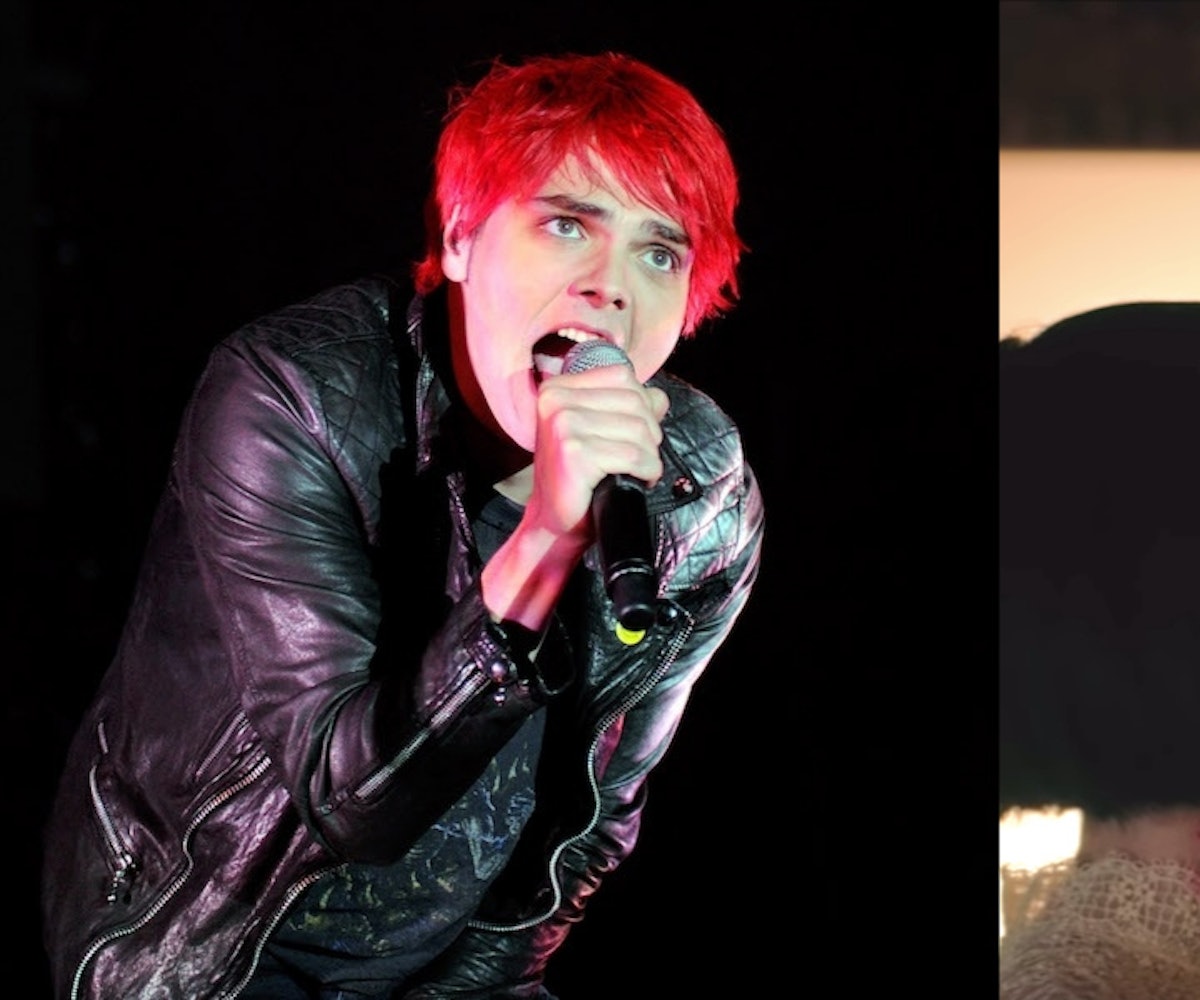 There's about to be plenty of happy emos thanks to the My Chemical Romance 2020 U.S. tour. The band announced their return to stages across America on Wednesday with a cryptic 13 minute and 20 second video, all leading up to a slideshow of fall 2020 concert details. If you're a self-identified Killjoy, you surely noticed the band's keen attention to detail in putting together the short film, with Easter eggs littering each and every scene.

The short film follows a young man wearing a leather cloak, who begins by attempting to summon the band using a Ouija board. From there, he's chased by creepy masked figures through doors marked with the band's new symbols, stumbling upon characters familiar from music videos and albums past.

There's deep-cut lyrics from 2002 debut album I Brought You My Bullets, You Brought Me Your Love, recreated scenes from iconic music videos like "Helena" and "Teenagers", and touching nods to loved ones of MCR band members who have passed away. Gerard Way has definitely seen all of the stan-made memes that came during the band's hiatus — he actually confirmed one inspired part of the short film in a new Instagram post — so it wouldn't be surprising if he was waiting to watch the most dedicated followers pick up on every last detail.

Below, NYLON rounded up all the best Easter eggs featured in MCR's tour announcement video. How many did you catch?

The denim jacket hanging in the closet features the Danger Days spider iconography overlaid on an American flag.

It seems that teenagers scare the living sh*t out of the video's main character, as he has a gas mask from the cheerleaders of the "Teenagers" music video hanging on his wall.

The shrine of photos displayed at the beginning of the video are a touching nod to those lost by the members of My Chemical Romance. Familiar faces include Lauren Valencia, MCR's longtime manager, who died of cancer in July 2019, and Craig Aaronson, the A&R executive responsible for signing MCR to Warner Music, who passed in 2014. According to fans on Twitter, other photos show the Way's grandmother, Frank Iero's grandfather and dogs, and Ray Toro's father.

Yes, those arethe lyrics to "The Jetset Life Is Gonna Kill You" on the keychain.

The lyrics from the "Interlude" on Three Cheers For Sweet Revenge, "Saints protect her now," are graffitied on the wall.

As the main character enters the church, he picks up a funeral program that bears the words "In Memory of Helena" on the front, a not-so-subtle nod to "Helena".

The blood-spattered man and wife at the altar are recreating the cover of 2006 live album Life at the Murder Scene, which is just a non-illustrated version of the Three Cheers album art.

In case you missed the first "Helena" reference, the music video ballerina is back from the dead in the same goth tulle dress to reprise her funeral choreography.

Don't blink, or you'll miss the "Thank You For The Venom" lyrics adorning a matchbox.

True Killjoys probably didn't miss the Danger Days intro phrase written boldly across the back of the car that sped off into the desert.

Each door in the announcement video bears one of the symbols introduced with MCR's first cryptic reunion teasers, which fans have theorized to represent each of the band's four albums.

But, there's a fifth logo — perhaps a hint at a fifth album, one to come after Danger Days, both in the video and in real life? We can only hope.