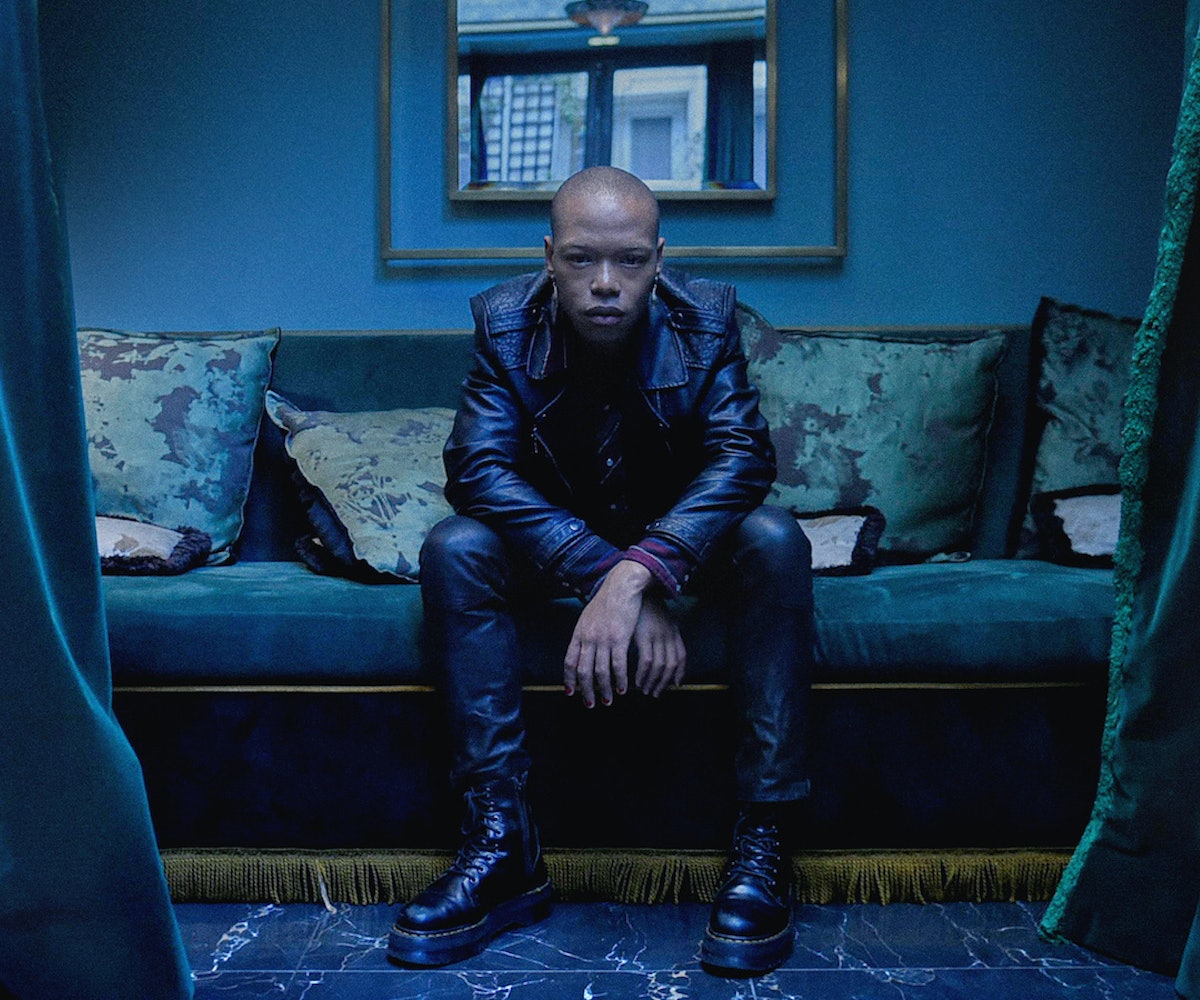 Nakhane's album You Will Not Die might be making its U.S. debut today, but it's already been released elsewhere in the world, making this a sort of reintroduction, a new beginning. As he told me over the phone about his songs, "You've lived with them for quite a while, but now they've grown up, so you send them out into the world and they can start learning things."

Nakhane has had to reintroduce himself to the world in his personal life as well. His background includes a difficult relationship with his family, because of his departure from a deeply religious community and lifestyle in order to fully embrace his queer identity.

To create You Will Not Die, as he always does during his writing process, Nakhane intentionally set up limitations to work within in order to keep things fresh: "With this album, I had my laptop, a media controller, and I had a microphone." It was a big departure from his first album, released only in his home country of South Africa, in which he relied mainly on his acoustic guitar. With You Will Not Die, though, he simply leaned into the unfamiliar territory of electronic sounds and things worked themselves out in time.

"But before the songs were dressed in any electronic clothes," he clarified, "the words had to be as good as I could make them, and the melodies. Because I was writing about my family, and the churches that I grew up in and my childhood, that meant the melodies had to be operatic." The emotional effectiveness of these operatic melodies was something he found himself deeply focused on, asking a series of questions of himself, "Could I walk around in my neighborhood and really enjoy the music? Could I be moved by it? Could my friend be moved by it?" When his mom cried in reaction to hearing a particular song about his grandmother, he knew he'd successfully homed in on the emotional impact he craved.

"A friend of mine once told me, 'There's important work, and there's good work.' It's not that those two types of work are mutually exclusive, but sometimes people can confuse the two. And important work can be good, but good work can also not be important. I wanted to try and find a place where those two places meet," he told me. With this album, he achieves this with every breath. His voice carries a subtle dominance; he sails over every lyric effortlessly, yet simultaneously slices through to your core, his songwriting and vocal abilities matched with deadly precision. Nakhane doesn't need aggression or formulaic build to climax to force you to feel something. He'll ease you into it, even if he's working within an electronic mode.

For the album's title track, Nakhane said the melody came to him as he took a bath, and when he got out, he walked to his piano and drew it out of himself throughout the day. "The subject matter was so difficult to write about—abandonment, and dealing with the idea of being given up and, I suppose, trying to make peace with it." He lived with his biological mother for a single year of his life, when he was six, and has only met his father twice; he lovingly refers to his aunt as his mom, who adopted him with her husband and raised him from the age of six onwards.

"There's that [lyric]," he told me, "'I heard there's a light/ That's invisible/ For the ones who do stray/ When I'm alone I know that we're indivisible.' And it's this whole idea that the people who spawned you, who brought you to this earth, you may try as hard as you can to forget them, but you can never be completely divided from them because their blood runs through you whether you like it or not." With the help of a bottle and a half of wine (the "only song I've ever written drunk," he assured me), he laid it all out at once. His producer used the drunken demo backup vocals for the final cut, Nakhane said, "because they're so nice and wobbly, I sound like I'm wasted." After he played it for a friend, Nakhane was told, "I know this is going to sound very cruel, but I love when you're devastated."

Nakhane knows it's not just devastation and grappling with potentially traumatic memories that makes for good art, though. "Whether you're joyous or devastated, it doesn't matter," he told me, "You just need to be vulnerable and allow yourself to get out of the way."

Nakhane ends his album with a queering of his Christian roots. A gospel song, a prayer, but "add some anal sex in it," he laughed. He told me he considers Christianity to still be his mother tongue, and that, even though he no longer believes, "the fact still stands that it's a part of your culture that you were born into, and that will follow you around your life until you die. Its language will always be a part of who I am, and I'll always use it." He continued, "I use it to empower myself as who I am right now without feeling guilty, without feeling somehow compromised by it, oppressed by it, suppressed by it. I use the language to empower myself because I think it can be beautiful."

He sees the album's final song, "Teen Prayer," as a proper epilogue. To get there, he needed to return to the places where he grew up, and he needed "to let them go." His tarot card reader in Johannesburg, South Africa, told him so. He recalled responding, "Oh, I don't know. I really don't want to trigger myself. A lot of those places have a lot of pain, I left them for a reason." But he trusted in the reader. He felt the sadness and pain associated with the places as he revisited them, and returned home, drew his curtains closed, and rested. He recalled, "I remember waking up and the first thing that came out of me was [the lyric]: 'When I woke up the room was dark.' And I got up and grabbed an acoustic guitar, and I was like, No, no. You're not working with an acoustic guitar. What's wrong with you? And I went to my piano, and I wrote the song in one go like that."

And that was it, the album was complete. He told me that after it was complete, he said to his team, "There's nothing else inside of me. I'm finished now. Let's record."

You Will Not Die is out now.

NEXT UP
Entertainment
Paramore Finally Has A Release Date For New Music
Entertainment
‘Euphoria’ Star Dominic Fike Is Going On Tour
Entertainment
Megan Thee Stallion To Host & Perform On 'Saturday Night Live'
Entertainment
The Meaning Behind Paramore's Disillusioned Anthem, "This Is Why"