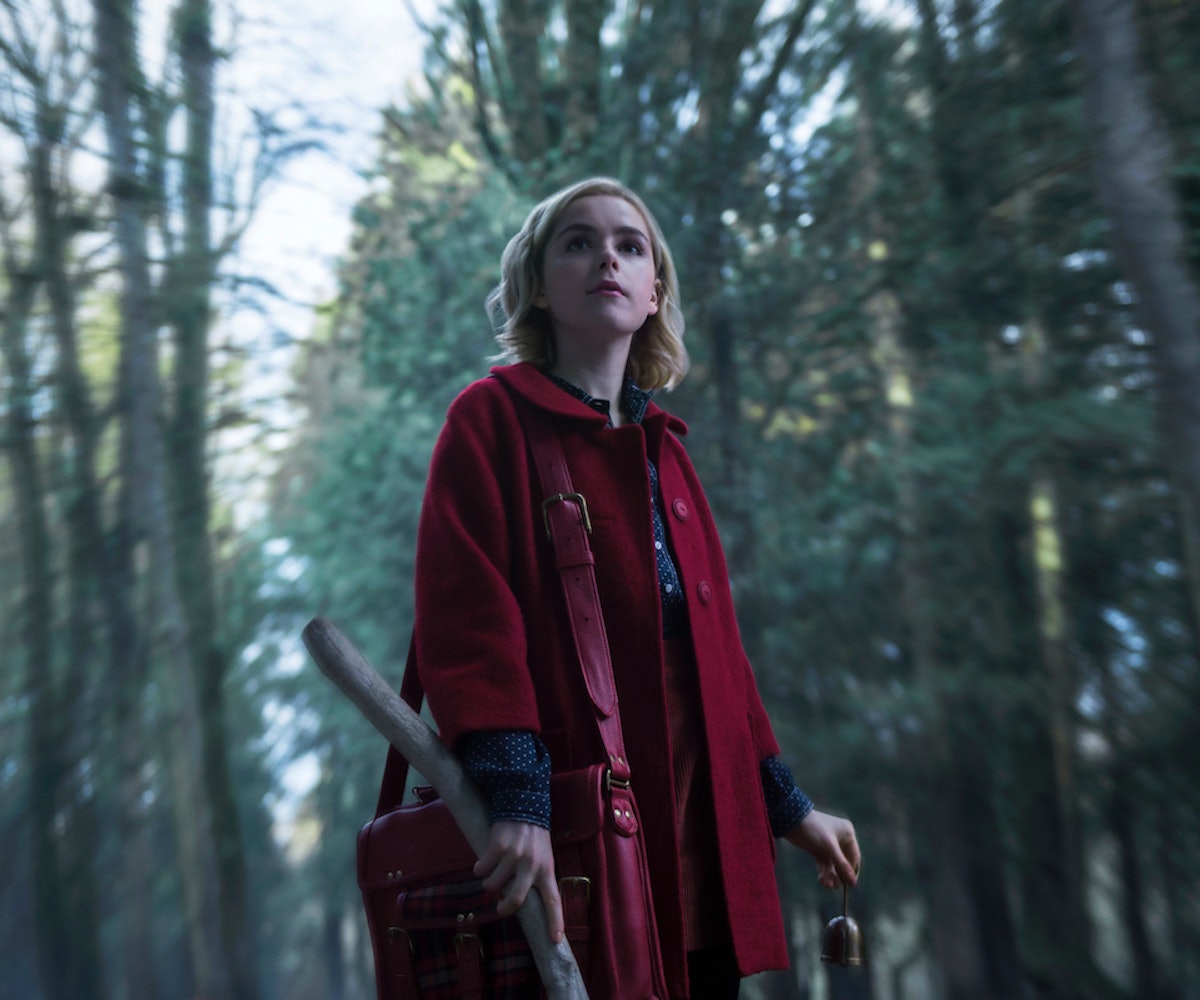 Before the second season of Netflix's Chilling Adventures of Sabrina starts, we wanted to give you a little refresher on all that happened the first season. If you're new to the show, the first thing to know is that it is not a reboot of 1996's Sabrina the Teenage Witch. This version of Sabrina Spellman's life is really dark. So much so that I'm worried it could give me nightmares if I try to rewatch Part I in one sitting.

If you're in the same boat as me, you'll really appreciate this roundup of all the important details from the first season ahead of Part 2's premiere.

Sabrina's parents died when she was young, and she was raised by her two aunts, Zelda and Hilda. Sabrina's father was a witch, and her mother was a mortal; her aunts are her father's sisters and are both witches. However, Sabrina grew up going to a regular mortal school, with the plan being to give up all ties to her mortal life after her dark baptism on her 16th birthday.

Predictably, Sabrina is conflicted about leaving all her friends and her boyfriend behind. When it's time to sign her soul over to the Dark Lord, aka Satan, she doesn't know if it's the right decision and runs out of the baptism ceremony, much to the chagrin of her aunts.

Though she does eventually sign the Book of the Beast and steps fully into her power as a witch, it's important to keep in mind that her mortal half makes her more empathetic, caring, and interested in doing good than her witch peers. We also learn that she was baptized in a Christian church in her infancy, which grants her some protections from the Satanic Church of Night and allows her to continue to live a double life, attending both the Academy of Unseen Arts and the mortal Baxter High.

Balancing these two parts of her identity is the main tension of Sabrina's character, but when we left her, she seemed ready to step into her destiny as a powerful witch.

Harry Potter and Sabrina both need to be in the same support group for magical children who were lied to about how their parents died. Sabrina has been told all her life that her mom and dad died in a plane crash. But there have been several suggestions from other members of the witch community, including the Weird Sisters (more on them soon), that this isn't true.

What we do know is that the Dark Lord only allowed her father to marry her mortal mother if the couple promised Sabrina's soul over to him.

Dorcas, Agatha, and Prudence (the HBIC of the clique) make up the Weird Sisters. They are a trio of teenage witches who shun Sabrina because she's half-mortal. But as is the case with high schoolers, the Weird Sisters and Sabrina are more frienemies than outright enemies. In Part 1, they cursed her when she refused to attend the Academy of Unseen Arts; but then they helped her teach some bullies at her mortal school a lesson. When Sabrina got to the Academy, they ruthlessly hazed her, and she outsmarted them with the help of some ghosts. Then she begged them for peace.

But a truce is going to be hard to come by because while Dorcas and Agatha mainly go along with everything their leader says, Prudence has a personal grudge against Sabrina. She's clearly promised Father Blackwood to make Sabrina's time at the Academy miserable.

There is drama in the Church of Night

Father Blackwood is the current leader of the Church of Night, governing both the religious organization and the Academy of Unseen Arts. He clearly has an unknown beef with Sabrina and is manipulating members of her family to keep her under his control. He also wants to start a hierarchy with warlocks (men) on top and is thirsty to have a male heir. He thought he got his wish when his wife, Lady Blackwood, gave birth to a baby boy.

But there are two threats to Father Blackwood's legacy plans. First, his wife actually had fraternal twins before dying during childbirth, and the firstborn was a baby girl. But Father Blackwood doesn't know any of this (more on that later) and thinks he only had a son. The second threat is Prudence. She is Father Blackwood's illegitimate daughter and so can't take over... unless she gets rid of her dad's real heirs.

Harvey was Sabrina's longtime mortal boyfriend. She hid the fact that she was a witch from him until she was 16, and revealing the truth to him didn't go well at all. How badly did it go? Well, after Harvey's brother Tommy died in a mine shaft (thanks to the Weird Sisters being mean, per usual), Sabrina literally traveled into the afterlife to bring him back, despite Harvey telling her not to interfere. So when Tommy came back like a zombie and Sabrina confessed that it was her fault, Harvey had to shoot his own beloved brother. He then vowed that it was over between him and Sabrina. I can't say I blame him.

Nick, who used to date the Weird Sisters (like, all of them, because witches are very sexually liberated), befriends Sabrina as soon as she arrives at the Academy of Unseen Arts. There are definitely sparks between them, and it's likely that he'll be around to help Sabrina lick her Harvey-induced wounds. He also helped her discover a magical Rubik's Cube-like puzzle that her father created before she was born. For what it's worth, I don't trust Nick one bit.

Ambrose's freedom is still on the line

Sabrina's cousin Ambrose has been confined to their property for over 75 years. He received the indefinite house arrest sentence when he didn't snitch on his co-conspirators in their plot to blow up the Vatican, and he still won't. Father Blackwood heard the story and admired Ambrose's loyalty. He agreed to help lessen the sentence if Ambrose works for him at the Academy. Ambrose is thrilled to be going anywhere other than the Spellman house and jumped at the opportunity. But as I mentioned before, Father Blackwood is shady, so I don't know if this is the happy ending Ambrose wants.

Both of Sabrina's aunts are in sticky situations

When the Church of Night found out that Sabrina's Aunt Hilda was the witness to her baby baptism at the Christian church, they ex-communicated her. She is taking advantage of her newfound freedom from the church (and her domineering sister Zelda) with a new boyfriend, Dr. Cerbeus. But there are some red flags. Namely, the fact that Dr. Cerbeus says he's human but is definitely not. We're still not sure what he is, but mortals don't have eyes that flash red like his did after their last date.

Salem the cat hasn’t said anything yet

Sabrina finally got her familiar—a goblin who inhabits the body of an animal in order to serve its witch master—in the form of her pet black cat. But unlike in the '90s version of Sabrina's story, this Salem doesn't talk.

'Chilling Adventures of Sabrina' Is A 'Riverdale' Companion

This is just a reminder that there may be some recognizable character cameos from the CW show in Part 2.