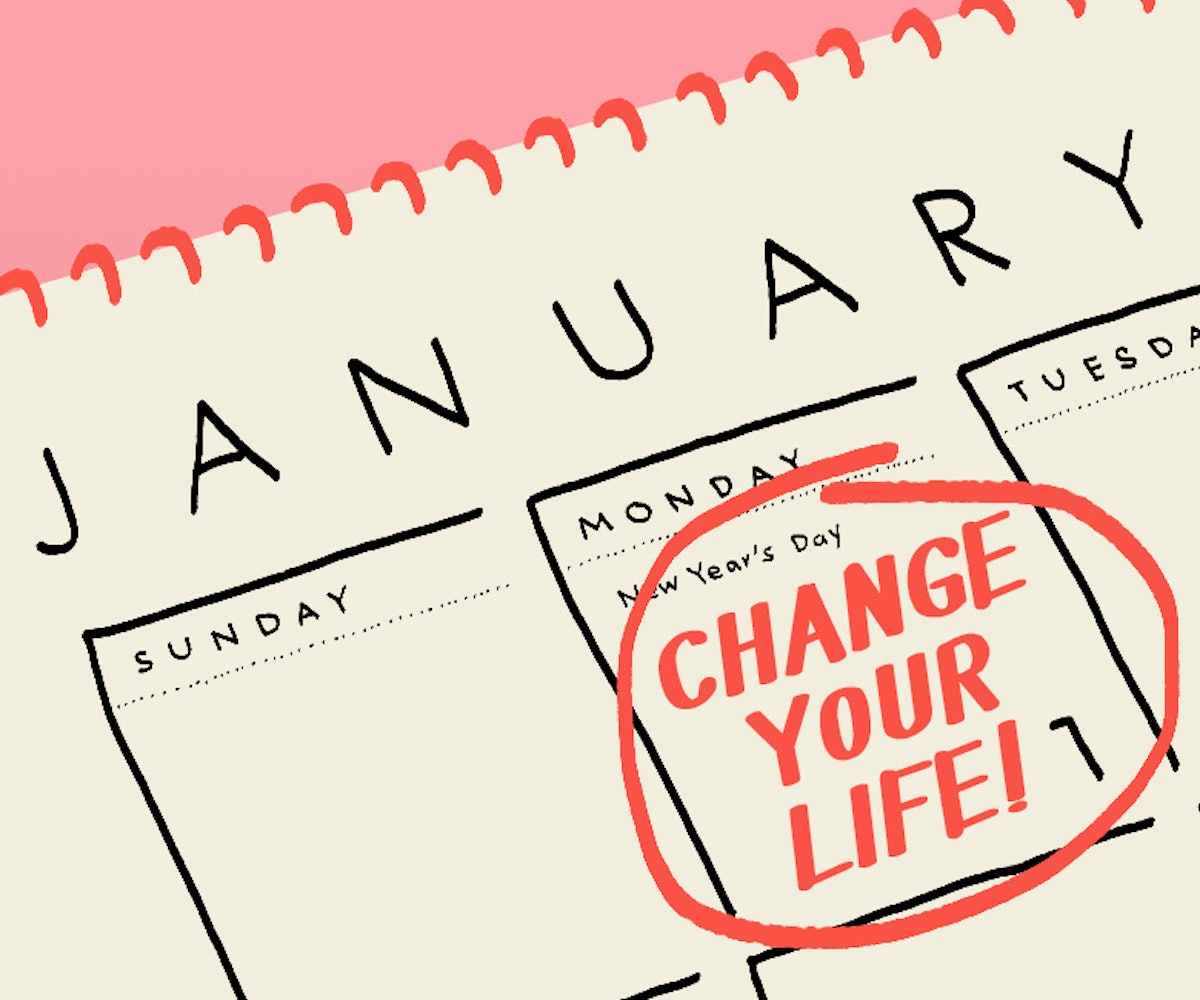 Every January, after a couple weeks of doing absolutely nothing (because the holidays bring out our inner couch potato), it seems that the entire world is brought to our collective senses and sets a resolution for the year to come. These resolutions are never small or simple but, instead, involve a complete life overhaul. Everyone starts off the year telling themselves that they'll eat healthier and work out more, or do any other combination of things for their own betterment—promises that often seem to fall flat after a few weeks, tops. And as someone who never seems to live up to the (maybe too lofty) goals I set for myself, I always find myself at an impasse, wondering if I should make a resolution to stay on par with everyone else, even if I know that I may not succeed, or risk judgment and start out the new year without a year-long goal in mind.

Even before making a resolution, I become anxious about failing to achieve it. And when I think I'm going to fail at something, my anxiety usually tells me that I shouldn't even start. So, basically, it's a classic damned if I do, damned if I don't kind of thing. While I'm sure that not everyone is as anxious as I am about not reaching (even minuscule) goals they've set for themselves, I do notice a lot of people struggling at this time of year. Speaking with Dr. Rob Holaway, a licensed psychologist and the director of Pacific Anxiety Group, I came to realize that while setting New Year's resolutions may be great for some people, they could cause more harm than good for others.

Holaway notes that, more often than not, people who set New Year's resolutions will end up falling short of their intended goal. "The benefit of the new year is the focus it often brings to the changes or accomplishments one wants or hopes to make in the year ahead," he acknowledges. "However, for most people, New Year's resolutions will not be successful, often because of the same challenges, difficulties, or obstacles that made them difficult to accomplish during the previous year." The start of a new year doesn't make us any less of the person that we were the year before, and challenges don't suddenly disappear when the clock strikes midnight.

But it's become normalized for us to set goals for ourselves as if everything in our lives changes from year to year—and while that could be motivational for some, it can freak others out. For me, the fear of falling short of goals I've set for myself is incredibly stress-inducing, and often gives my anxiety an excuse to act up as well. Add to that FOMO flareup that accompanies the fact that it seems like everyone is doing something productive while I drag my feet, and the culture around the New Year's resolution takes its toll on my mental health. I feel like I've failed at the year before it's even begun, which is probably the worst way to start it out. Needless to say, my mental health takes a nosedive.

Holaway points out that New Year's resolution stress is tied to my outlook on goal-setting as a whole. In general, he says, the act of goal-setting is "essential to making any type of change in our lives or to accomplish something that is important to us." Though there are "very few negatives to setting goals," those who always seem to find themselves falling short of their self-made resolutions may lose confidence in themselves over time. "If someone has a history of setting goals and not following through, they will gradually erode their confidence in their ability to make changes and to accomplish what is important to them," he says. "This will become very discouraging over time and eventually result in someone feeling trapped by their circumstances without any belief that things could be better or that they are capable of making changes."

Though it sounds grim, his words seemed to perfectly encapsulate my outlook on goal-setting, especially when it came to New Year's resolutions. I lose motivation to make large, year-long challenges for myself because I'm afraid that they won't pan out, like many other intentions that I have set before. But, simply opting out of making a resolution may bring in even more bad thoughts: "For some, opting out might reinforce a history of not pushing oneself very hard or not believing in oneself to successfully make changes, thus resulting in further self-judgment," he says. Even though that may be the case, he says, choosing not to make a life goal that you know you probably won't achieve "will likely be more positive than trying half-heartedly and failing to reach the stated goals."

The problem with big New Year's resolutions that feel like lifestyle overhauls, and the reason why it's so common to end up failing, is that we don't fully understand the work that it takes to make our resolutions actually happen. We get so caught up in reaching our goals that we forget to think about how much goes in to actually making them happen, and we end up getting discouraged when it's not a walk in the park. "When setting goals, it is necessary to map out all of the steps required for success, anticipate all of the obstacles that may arise, and commit to staying the course as challenges occur and motivation wanes," he says.

Instead of taking an all-or-nothing outlook when it comes to setting a New Year's resolution, Holaway says, those who are easily spooked like me may take better to setting a series of goals that culminate into the thing you want to achieve, instead of having just one goal looming. That way, you can feel the excitement of achieving one small part of your goal at a time, instead of feeling discouraged when, after months, your lofty goal is still out of reach.

Holaway urges those who may struggle from this sort of anxiety and stress to, instead of taking the backseat, go full-force if they're going to make a resolution at all. In addition to breaking down your goals to make them more easily digestible, he encourages us to take advantage of our support systems. He sees an upshot to posting about your journey on social media, which he says provides a level of accountability and a feeling of community. Tracking your progress, he says, "may actually increase motivation to accomplish to completion, as one may feel they are accountable to their friends and followers." And, too, "they may also derive support by posting their progress and difficulties along the way, commiserating with others in the same boat, and sharing motivation with one another to keep them going."

What's most important, though, is that you make sure that setting an intention for the year ahead doesn't come at the cost of your mental health. If the thought of making a resolution activates your fight-or-flight response, the best idea isn't to just skip out on it altogether, but to try to make smaller goals that you know you can achieve.