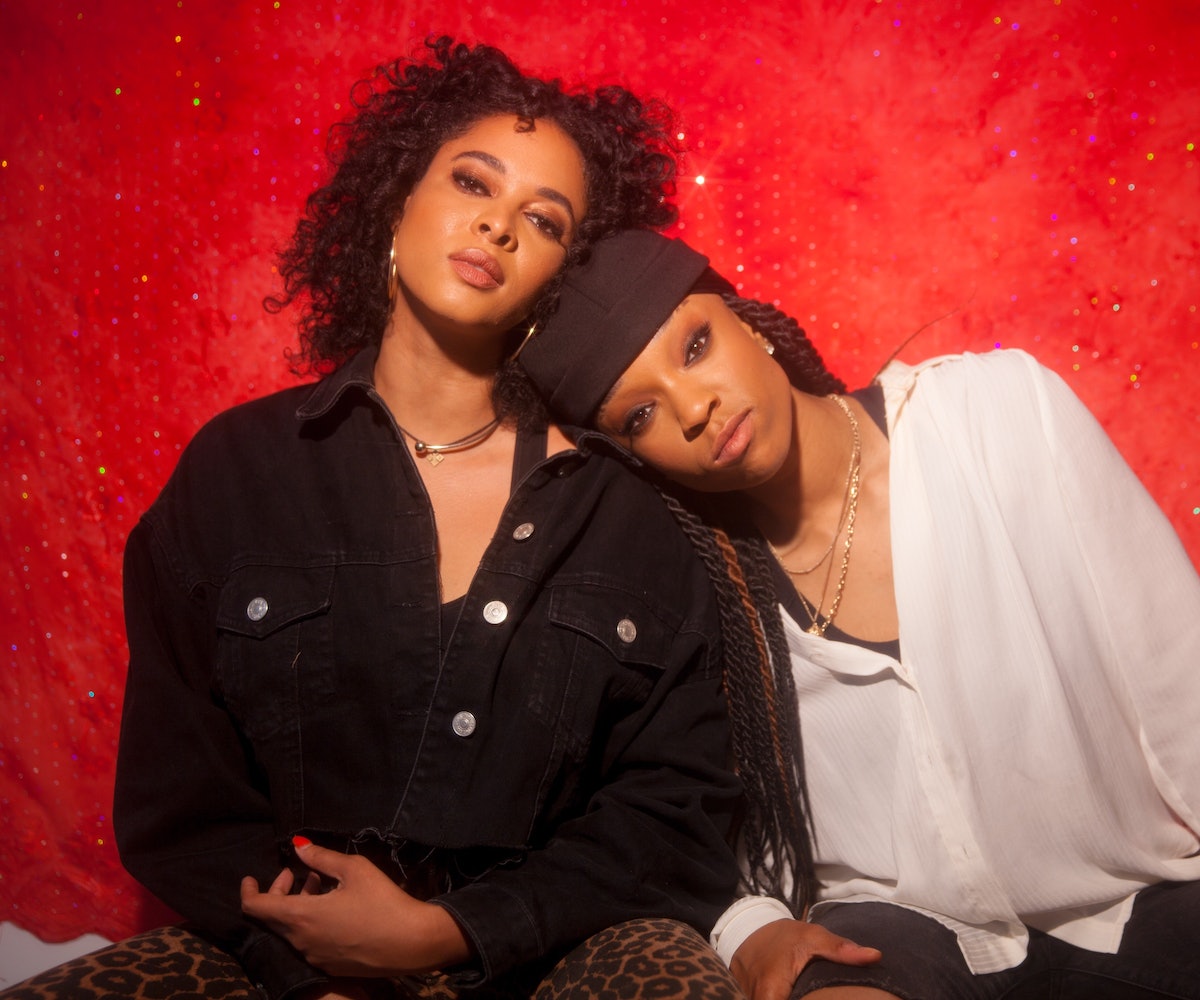 Blackness is diasporic. There's hardly any part of the world that Black folks haven't touched. The same is true for queer-identified people, and those identities often intersect. Whether tucked in underground parties just out of view from everyone else or showing up the president's house with ballroom voguers in tow, Black LGBTQ communities are community-building and creating all over the world. And Giselle Bailey and Nneka Onuorah are documenting those stories.

The two New York-based filmmakers met as adults, but their respective experiences made them kindred, creative spirits, ready to go out in the world together, cameras in hand, to tell the stories of people who look like them.

Check out our conversation below to see exactly why they do what they do.

Why are telling stories of queer people across the Black diaspora so important?

Nneka Onuorah: To me what's so important about sharing queer stories right now is the idea of freedom, and normalizing the idea that we're part of the world and our stories need to be told over and over again. I feel like there's this idea that with queer stories, you're supposed to tell one specific story or niche film about some struggle—being kicked out, being ostracized—as if we're not lit; as if we're not beautiful, and powerful, and multidimensional. The stories that Giselle and I like to tell highlight people as their best selves: self-actualized, bold, confident. We tell stories about people who are spreading that energy and that message. That's part of our people. That's part of our culture and heritage as African people, as Caribbean people, as Black people in the United States. We like to highlight those stories more than the stories of being a victim or being pushed down and kicked aside. The world just needs more light, more "how to," and more moving forward as opposed to just looking back and sitting in what we're in now.

Giselle Bailey: We've been talking about how the boldest form of activism is just celebrating ourselves.

GB: We're working on a project right now between Nigeria and the U.S. It's about people who have left Nigeria and sought asylum abroad because of recent LGBTQ laws that have been put in place. One of those people who lives in New York now goes back to Nigeria. When he gets there, he meets a ton of bold, non-conforming, fluid artist-activists, and it really changes the way he sees himself and his identity. There's a lot there, and a lot that has to do with [Nneka and my] personal stories. For example, I'm an immigrant, and I understand how it feels: the isolation and having to construct your own culture and space. I think as queer people it can seem like a plight. Coming together and building that experience is how you get to that queer joy.

Always as a filmmaker, you want to make sure that you're setting up measures for protecting people. At the same time, there's no way to make it without any sort of disruption. The beautiful marriage of that was just a big obstacle to push past. Plus, just being two women filming in Nigeria, you're dealing with men, security, [and] people in the neighborhood that don't want to talk to you. They want to talk to the man next to you. Navigating that deep patriarchal environment.

It was also the first time I had been back to Nigeria since I was six years old. My dad's Nigerian and my mom's from Harlem. It was a very intense experience for me emotionally just to go back to my roots, but into a space where they say I should be jailed for 14 years for my spirit, for who I love, for who I am. Going back there, that was deeply opening up some wounds there. I was able to be in the story with the people we filmed.

What's so beautiful about this story is that it's bold. It's bright. It's funny. It sounds like something so intense because, What if they go to jail? But the people in Nigeria are fearless. They're relentless. They're bold. They're funny. They can dance. They can rap. They can sing. I think what people will get from this film is a surprise. People in the U.S. are going to enjoy it, and people in Nigeria are going to enjoy it. It's so interesting because people here in New York [are] playing all the Afrobeats. In Nigeria, they're playing Nicki Minaj, Cardi B, and Ariana Grande. All our expectations turned out to be the opposite. That brightness and boldness was there in that space, where that raw movement is being created right now in real time. Here, the U.S. is in an interesting place, to say the least. So it's interesting to see how those two energies differ. What was so powerful was to just be back in Africa together as a crew.

GB: With a Black crew

NO: Yes, we went all as a Black crew, which is also different. We had a Black DP. Our B-cam, she was a Black woman as well. All from different parts of the world. We had a Nigerian associate producer. She was in London. We had a Caribbean sound man. I think people really love that we came as a Black crew, because they're used to all-white crews coming in and telling African stories, so it was great. It was like family. It felt like family. It felt like going back home. It felt like unity. There were some tough moments that we had to overcome as women directors, but I think it was a great training ground. If you can shoot in Nigeria, you can shoot anywhere.

Did you get any pushback while you were there?

GB: That's definitely by design, and that's exactly the experience of those we were following, except they live there every day.

NO: It just really brings everything out of you; and the feeling of being able to protect yourself but still push the movement forward. You are almost a part of the film as you're making it, because you're in this situation while you're there. You're with them as well, so you're experiencing the nuances of their everyday life. [Viewers] will be able to feel their energy.

How did both of you get into filmmaking in the first place?

GB: I got into filmmaking through art and trying to find some middle ground between art and activism, which I think are definitely twin flames. I started working with an artist doing a lot of installation work. I taught myself how to edit and shoot because I wanted to be a one-man band. I'm a loner, and I love being able to do different aspects on my own: write it, compose it, shoot it, make it come to life.

In the art world, I felt like I wasn't speaking to my own community in the way that I wanted to. So I started moving into things that felt a little more tangible to me, my stories, and the stories of the people around me. That's how I moved more into documentary filmmaking. I worked on Gaycation, States of Undress, lots of films about queer spaces, and a lot about traveling to different places trying to find home or similarities between us.

NO: I was actually a television producer first. I started in television when it wasn't poppin'. There was no Netflix or any of that. I was in school for psychology and just [wanted] a fun internship. I worked in television for about seven years. I did Black Girls Rock Awards, and different documentaries, different artists [like] Chris Brown and Aaliyah.

[But, eventually] I was like, I'm not telling stories of people who look like me. If I can't see myself on television, I'm not living in my full purpose. I took all the money I'd saved up and started shooting every day after work for a film I made called Same Difference. It's a film about the internalized discrimination within the Black lesbian community, based on heteronormative gender roles. That was my stepping stone into film. It was like my first baby—wanting to tell my own stories—and it started it a whole big career of storytelling about people who want to be free, who yearn to be free. I feel purpose and destiny.

I did a show called My House on Viceland, and Giselle was the producer on the show. We met, and we would spend 24 hours of the day, sometimes overnight, just creating and thinking about ways to make this story different and authentic and make everyone connect to it. We realized that our creativity was like destiny. It was like yin and yang. We have the perfect balance of ideas, creativity, power, spirituality, and activism. Now, we've been creating a lot of amazing projects. We just did one about the African community in Paris that comes out July 4 [in France]. It's about this moment at the Presidential Palace in Paris where President Macron invited this artist named Kiddy Smile to DJ, and Kiddy brought voguers, and he wore a shirt that [translated in English] said, "Immigrants son, Black and faggot." It caused a stir and really brought attention to the ballroom scene in Paris. We're so excited to be able to tell stories globally. We're not even just speaking one language. We're all one world. It's like you can't fix one thing without understanding all of us. So it feels like a collaboration, a global movement that we're part of. To have two Black women to be able to do that is lit.

GB: Yeah, it's really liberating to choose exactly what stories we want to tell and make that happen for ourselves through [executive producing] our own stuff and directing our own stuff. And we both have so many different connections to the African diaspora. I'm Jamaican. My family helped pioneer the Rasta movement and helped settle Shashamane in Ethiopia, which is a place for displaced Africans. I've always been kind of all over the globe. All of these things are so dear to our hearts.

NO: It's so rare that Black women get to run the creativity and the money. It's usually one or the other, and we get to do both as we create our own projects and work with these amazing companies—Netflix, HBO, Lionsgate. It's a dream come true, honestly.