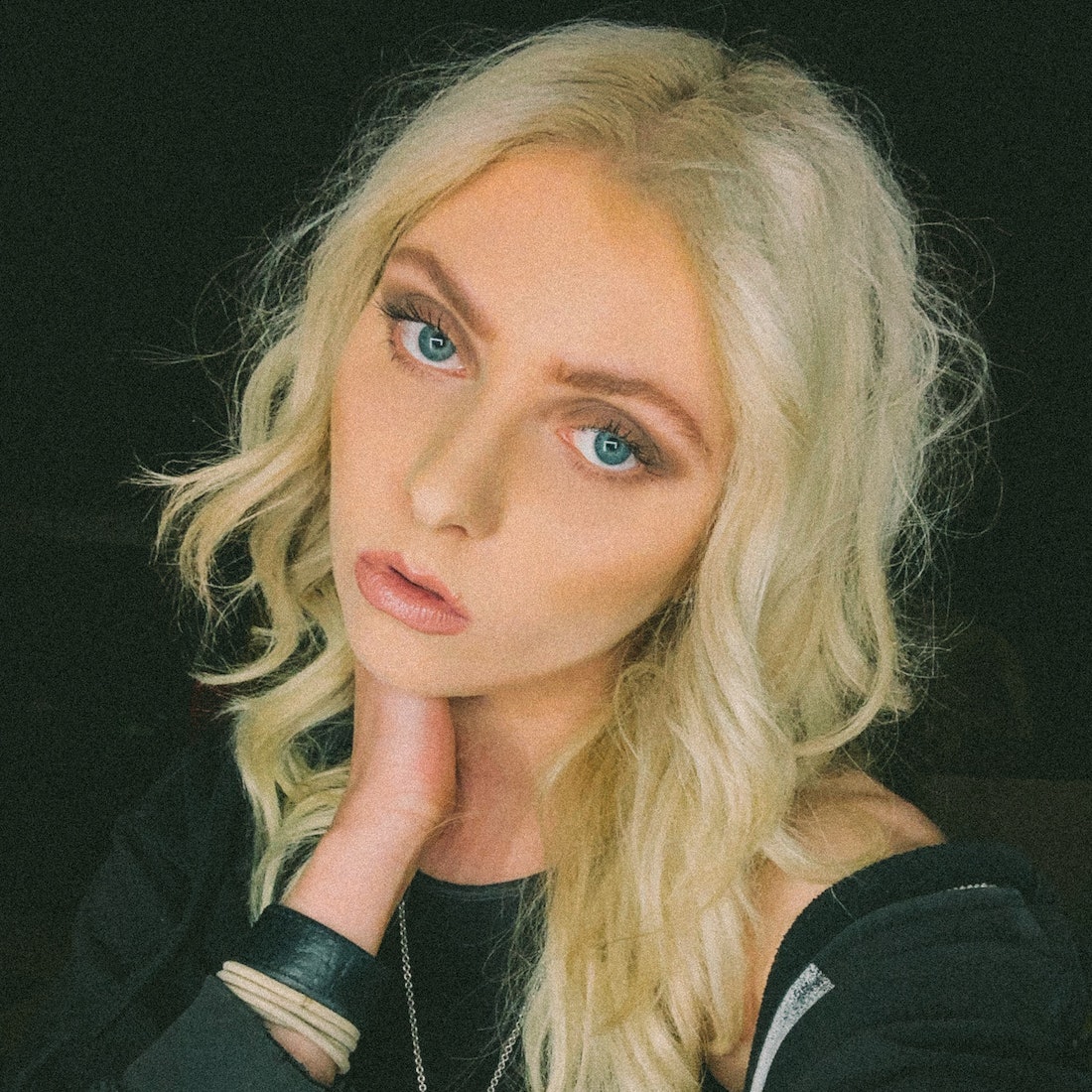 Taylor Momsen On The Pretty Reckless And Living Outside the Spotlight

Prior to 2020, Taylor Momsen hadn’t opened a laptop in eight years. “I'm so technologically challenged that I'm impressed I did this,” she says, referring to our Zoom correspondence, which has gone off without a hitch — a feat for anyone trying to have a conversation in 2021, let alone someone who didn’t touch a computer for nearly a decade. She even has a ring light over her screen, sitting on a makeshift desk that’s actually a piece of plywood balanced on two filing cabinets “with a couple Stephen King books shoved in between.” The invention predates quarantine. “I normally paint and sculpt here,” Momsen explains. “Now it's transformed into a makeup and computer station.”

It’s a Tuesday night in January when Momsen calls from her home in Maine. Though it’s been a full decade since she left Gossip Girl, the show that catapulted her to superstardom thanks to her role as the rebellious Jenny "Little J" Humphrey, Momsen still looks the same as she did when she was last on screen: her hair is shiny blonde, her eyes cased in liner, albeit slightly less heavy-handed than in those final episodes. (“I still will never get used to putting on makeup to just sit in front of my computer,” she notes offhandedly.) Momsen first started acting at the age of 7, starring as Cindy Lou Who in 2000’s How the Grinch Stole Christmas; Gossip Girl was her last gig as an actor. Now 27, Momsen can say she’s been doing what she’s always wanted to do: making music.

In 2009, mid-Gossip Girl mania, Momsen announced that she was fronting a hard rock band called The Pretty Reckless. She was 16 at the time; many saw it as a young starlet’s vanity project or a fleeting act of teenage angst. “I get it,” she says now. “I wouldn't have taken me seriously. I understand, especially coming from an acting background and being on a very popular television show at the time that was very tabloid-based, that it seemed ridiculous. Their thought was, ‘She's young and she's going through a phase.’ But in my core, I knew it wasn't a phase.”

In the years since, The Pretty Reckless has put out three records and toured the world, opening for the likes of Marilyn Manson and Guns N’ Roses, as well as playing their own sold-out headlining shows. Their 2014 record Going To Hell had three No. 1 hits, a feat that had not been accomplished by a female-fronted group since The Pretenders in 1984. “The fact that we have a career at all is always mind-blowing,” she says. “And the fact that I can wake up every day and I get to play in a rock band and write songs for a living and call that my job is mind-blowing.” But Momsen also knows what it took to get her to this point: “Do the work. Tour the world. Write songs. Play shows. Make the next record. Write a better song. Write a better record. Just keep doing it,” she says. “Eventually, it's 10 years later and people can't go, ‘This is a phase.’”

This month, The Pretty Reckless will release their fourth studio album. It’s called Death By Rock And Roll, but by all accounts, this is the album that gave Momsen the will to live again. “I don't want to immediately start the interview off on a heavy note,” she says early on. It's something of a self-aware disclaimer, but there’s simply no way for Momsen to talk about this record without getting intense. Back in 2017, the band had been on tour with Soundgarden when its lead singer Chris Cornell unexpectedly died by suicide. Momsen was, understandably, distraught. “I was not prepared for that,” she says. “Opening for them on that tour was the highest of highs for me. Having that end so tragically, I was not emotionally prepared for that.” She ended the tour early, retreating to her home to regroup and come to terms with what had happened. Eventually, she wrote some songs to cope with the grief and called the band’s longtime producer Kato Khandwala, saying that she wanted to get back into the studio. Just as those plans were put into motion, she received a call in May 2018 that Khandwala had died in a motorcycle accident — almost exactly a year after Cornell’s death.

“That was the nail in the coffin for me,” Momsen reveals. She fell into a deep depression that involved “substance abuse and just not treating myself well.” “I gave up on life,” she says. “I gave up on music. I quit life. I just gave up.” But it was at this darkest point when music saved her, she continues, “as cliché as it may sound.” At her loneliest, she turned to her earliest memories of music: The Beatles, then Jimi Hendrix, Bob Dylan, and Led Zeppelin — eventually, all the way back to Soundgarden. In a way, she thinks, she was "rebuilding herself through music.” She mustered up the ability to pick up a guitar again herself. From there, it flowed: all the pain and heartbreak and anger and sadness that had been bottled up became Death By Rock And Roll.

“As dramatic as it may sound, I really do credit the writing and the making of this album as the reason that I'm still around,” she says. “It's the thing that really saved my life and allowed me to find my center again and keep going.” The name of the album is a phrase the Khandwala often said in the early days of the band; now it serves as something of a thesis statement for what they are trying to convey with this album. “A lot of people might think that's a really morbid title, but that's not what that means to me at all,” Momsen says. “Death by rock and roll is a battle cry for life; it's living to the fullest. Live life your own way. It's this ultimate freedom. I think that this record is probably the first album that I had titled before I had all the songs done.”

The record was first announced in February 2020, with COVID-19 slowly pushing its eventual release to a full year later. For fans, this meant a longer wait for new music, but for Momsen, it was delaying the inevitable: rehashing all the painful memories that went into making the album. “I didn't necessarily think about the long game of, ‘I'm going to have six hours a day of talking about these losses and reopening those wounds constantly,’” she admits. “Some days, it's fine. Some days, it's like picking at a scab. Someone will say something or a thought will pop into my brain, and it's like I'm scratching a scab and it cuts wide open and starts bleeding all over the place again. It's different every day, because you're never healed. I'm still very much in the process of healing, and I think that I'm certainly in a much better head space than I was at the beginning of the making of this record. I'm all right to talk about it.”

One good thing about having spent your formative years in the spotlight is that by the time you’re 27, you know how to handle how it affects you. Not opening that laptop for eight years was fully by design — Momsen stopped reading what the internet had to say about her a long time ago. “I just think it's unhealthy, especially when you do so many interviews back to back and you inevitably start to repeat yourself,” she says. “I don't necessarily want to read everyone's take on my personal story all the time.”

Living between Maine and New York — far, far from Los Angeles — also helps. “I keep myself out of that side of things as much as possible,” she says. “To me, fame and success are two very different things. I think that people confuse them a lot. Fame, to me, is something that you have to always kick over your shoulder. It's a necessary evil, but fame does not equal success. Success is creating something that you are genuinely proud of, and whether it's commercially successful or not does not equal success either. Success, to me, is simply when I make something that I love, and I'm proud of. I can sit at home by myself and go, ‘I'm proud of that. I feel good about myself.’”

In Maine, where she’s in the "middle of f*cking nowhere,” she can be a rock star and still indulge her introverted side. She mostly spends time with the guys in her band, playing music or watching South Park — just generally being a “bro.” It’s something that she’s always wanted. “I wanted to be in a band, because I wanted to be The Beatles. I didn't want to be Elvis Presley. Who wants to be Elvis Presley? That's so lonely. Who wants to do this by themselves? I wanted to have the camaraderie.”

Momsen is content with where she’s at, namely with acting in the rearview mirror and hopefully many years of music ahead of her. But she doesn’t regret her past, either. “There are little things where I’ll go, ‘That was a mistake,’” she reveals. “But leaving everything else behind and solely focusing on music was the best decision I ever made, so in the grand scheme of things, no regrets. I certainly look back and there's some questionable outfit choices. Everyone's got that; I just happened to be all over the internet all the time. But even then, I don't regret them, because I look back on them now and I go, ‘That's who I was.’ Now, I'm 27, and I've grown up.”