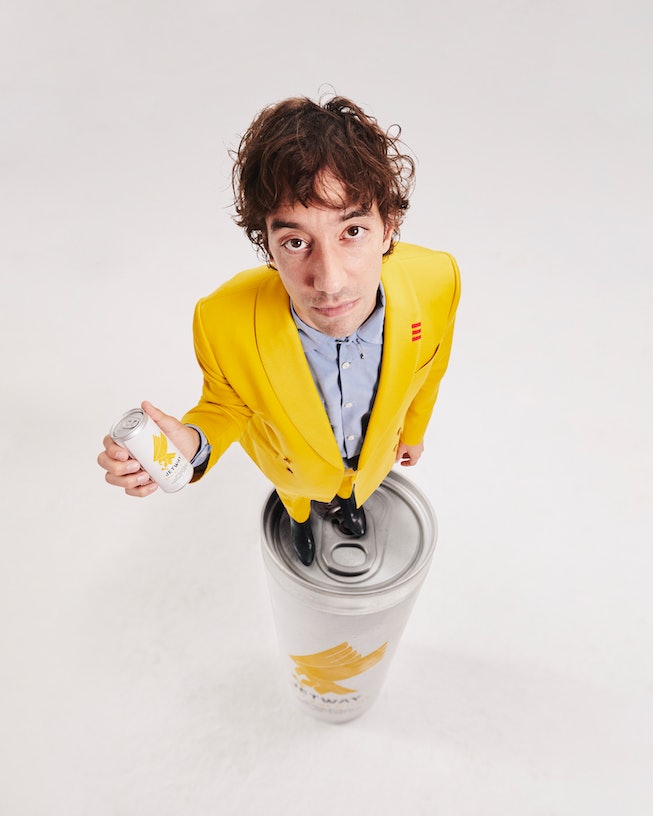 Five years ago, Albert Hammond Jr. had an unforgettable night in Italy. He was visiting friends, when he was introduced to something unknown to him at the time: the Aperol Spritz, which the crew drank all night, lingering in a local bar. Months later, at Monaco Formula, he thought back on that evening, and the feeling of it all. The idea to create his own beverage that could invoke the same emotions, all in one can, came to him. “I guess maybe I just daydream, and if an idea excites me enough, you just keep going at it,” he says over Zoom, calling from Brazil, where his band, The Strokes, has just played a headlining show.

Enter JETWAY, the culmination of Hammond Jr.’s passion, a partnership with now-COO and winemaker Ben Parsons, and many years of trial and error. Launched earlier this year, the brand offers two ultra-premium canned wine seltzers: a rosé infused with white peach, fijian ginger, yerba mate, and orange peel; and a white infused with yuzu, fijian ginger, yerba mate, and elderflower. Sold in stores in Southern California (and soon to be available direct to consumer in 48 states), the beverage is making its festival debut this weekend, with its offerings available on tap at Coachella.

Here, Hammond Jr. details the road to seltzer success, his pre-show rituals, and finding a way to sneak into Coachella

How has the product, as it is now and on the shelves, different from your initial idea? How has it evolved from the first thought to what it is currently?

At its core, it's the same. I just don't think I realized all the things that that nugget [of an idea] had. It was that idea of having a good night with something and then wanting to have that again, because it gave you something. So in that, it stayed similar. The flavors were pretty spot on. I grew up with these flavors. My parents had Japanese friends, and I grew up with Japanese foods from a very young age, so they were always there. And mom's from Argentina, hence the maté.

What we didn't realize, though, is that these flavors brought out the flavors you can taste in the wine if you were just to drink it straight. It almost made a unique version of it, which is better than if you just canned the wine. So that was special, because you don't know that you're going to do that, you're just trying.

What makes this a seltzer versus a spritz?

A spritz is just a name. When you mix something with soda water in Italy, it's a spritz. Personally, I would've just called it JETWAY, a premium beverage, a modern drink, and not told anyone anything about it, because I think it looks exciting and new. But everyone's like, "You’ve got to know what's inside of it." I hate the word spritzer, so I couldn't do that. I really just dislike that word.

A category has been trying to open up to compete with beer since I was a kid, and spritzer just sounds like something that didn't work. Everyone here was calling it seltzer when we sent it out to people, just because it was sparkling. To them, anything sparkling now is just a seltzer. And I was like, "Well, maybe we can elevate it." [Seltzers with] fermented sugar cane [are] designed for a cheap drink to drink fast and get drunk, which is great. I just thought we could elevate that with real ingredients and just an aesthetic that had nostalgia and romance and a sense of adventure in life and lifestyle, really.

When the White Claw boom happened while you were in the process of making JETWAY, did you have reservations about moving forward as a seltzer, which then held all these, for lack of a better term, frat boy connotations?

All that sugar just burns the palate, and it makes me feel like, “Oh, you don't know what something good is, so just take this.” JETWAY was always going to be marketed differently. We're a different brand. I feel like we came to fruition being more than a drink, and so the idea was what you pair [food] with it and becomes a part of your adventure, part of your memory. And I think the drink evokes that, and it's something you can have all day.

A friend of ours, Lizzy, who did all the artwork, is friends of this guy named Scotty who does amazing stuff, and then we did all these funny [marketing] videos. So I think we created a unique space for it. I like ads that are humorous. I'd like the brand to grow past me, it becomes its own thing.

That's another thing that happened — there became a lot of celebrity brands, and I wasn't trying to do that. I didn't think about that. It's such a bummer. I got sucked into wanting to make a drink because I wanted it myself. I just wanted to drink it, I wanted to have it.

It’s clear that the brand doesn’t take itself too seriously. In the nutrition info on the site, it notes that it’s “Instagram Friendly,” alongside facts like ABV and calories.

I personally just always think it's silly when they sell you booze as having something healthy in it, because if you want to be healthy, just drink water. But there's a fine line. You want it to sit in a place that feels modern and friendly. Like hard kombucha, it's got probiotics but that's probably being murdered by the alcohol. But I bet you natural probiotics would be better to regulate your intestines over booze.

Totally. In terms of viewing JETWAY as a lifestyle brand versus a product, what is the lifestyle that you're trying to convey, or the mood of JETWAY?

In the art itself, it has this golden age of travel romance nostalgia. There's an excitement when something's new that I wanted to capture. It was a lifestyle of hotels, gyms, clothes — it can go anywhere, because it's all about pairing; it rides with your experience. All the experiences you're having can pair with JETWAY.

In terms of expansion, what is the ultimate goal?

I have ideas I want to do, that I just don't say because I don't want someone else to do them. But I'm super excited. You know, it's weird, they run a fine line where they feel like they're new and exciting and you also don't know which way they're going to go.

I don't want to make it just a variety pack of the same thing with different flavors. I feel like these two flavors are really special and strong, and why I think we can be funny with stuff and be humorous, is that the actual product is great. It is of the utmost quality, and it really is what convinces people who don't want to try a seltzer, or don't want to even sell one, to try it. That's what got us as far as we are. We have friends who are like, "I keep forgetting this is really good." And our biggest uphill battle is that. But I think about where it can go, for sure. Even when I started it, I imagined the logo on a Formula One car one day. What's the point of dreaming, if you don't dream big?

What is your preferred way to drink it?

I think it needs to be very cold. I actually down them quite quickly. The first one, if I'm thirsty and want to quench, I'll just drink it quite fast. I like the fizz, the way it burns in the back. I do enjoy it in glass, as well.

When you pour it from a tap, it gets a head, like a beer, which is really unique and cool to me since it's a wine, and it confuses the brain. And, to be honest, the high from it is really nice. All alcohols have different highs. And I feel the mixture of ingredients and the high from it is a very pleasant one.

Has it made it to the backstage rider yet?

Is it a pre-show or a post-show drink?

I don't do anything pre-show. I feel like I've figured out some balance in my life, and that's one of them, where the show is the show. It's about playing and just connecting with the audience and your band, and I love that. Sometimes I won't even do post-show that much. It depends. But I had my daughter's first birthday a few weeks ago and we had a big tub of it, and it was a hit with everyone. It was really cool to see it during the day, and everyone with kids, it created a really cool vibe. It felt like baby Coachella. Babychella.

To that point, having it at Coachella is insane and very cool.

Yes. And it's going to be on tap a this seltzer garden.

Will you be there?

I'd like to. I don't know if I can get in. I've got to call someone and ask for a favor or something.

I think they'll be able to let you in.

I hope so. I don't know. Sometimes if you're not playing, it's hard to get in. I have played though. I will bring out that card, "I have played here."

Maybe just bring an old artist pass, if you have one floating around.

I'm too old to do that. I don't need to be thrown out by anyone. I don't want to argue with security.

That’s fair. Plus you have more festivals and shows to get to later this summer.

Yes, we'll take it with us. Our first show with Chili Peppers is in Seattle, and Washington State is where the wine comes from and where it's canned, so we'll take whatever we need for the rest of America from there, and have it in the back. Now that I'm thinking of it we should just take a keg of it. That seems better.

That seems very appropriate for a tour with the Red Hot Chili Peppers. You're going to do JETWAY keg stands in the back.

I always thought it'd be a great drink to pregame, whether it's pregame a football game, or pregame a show, because I feel like there's something naturally uplifting about it, the buzz is good, and I feel like it just gets your juices going. It just gets you excited to go.

NEXT UP
Culture
On The List (With Melissa Rich): How To Throw The Ultimate Apartment Party
Nylon Nights
Backstage with UNI and the Urchin’s Charlotte Kemp Muhl and Jack James Busa
Culture
Caroline Polachek In KNWLS & More Party Photos You Missed
Nylon Nights
How Renzo Rosso Turned The Pelican Hotel Into A Miami Must-Stay
Style + Culture, delivered straight to your inbox.