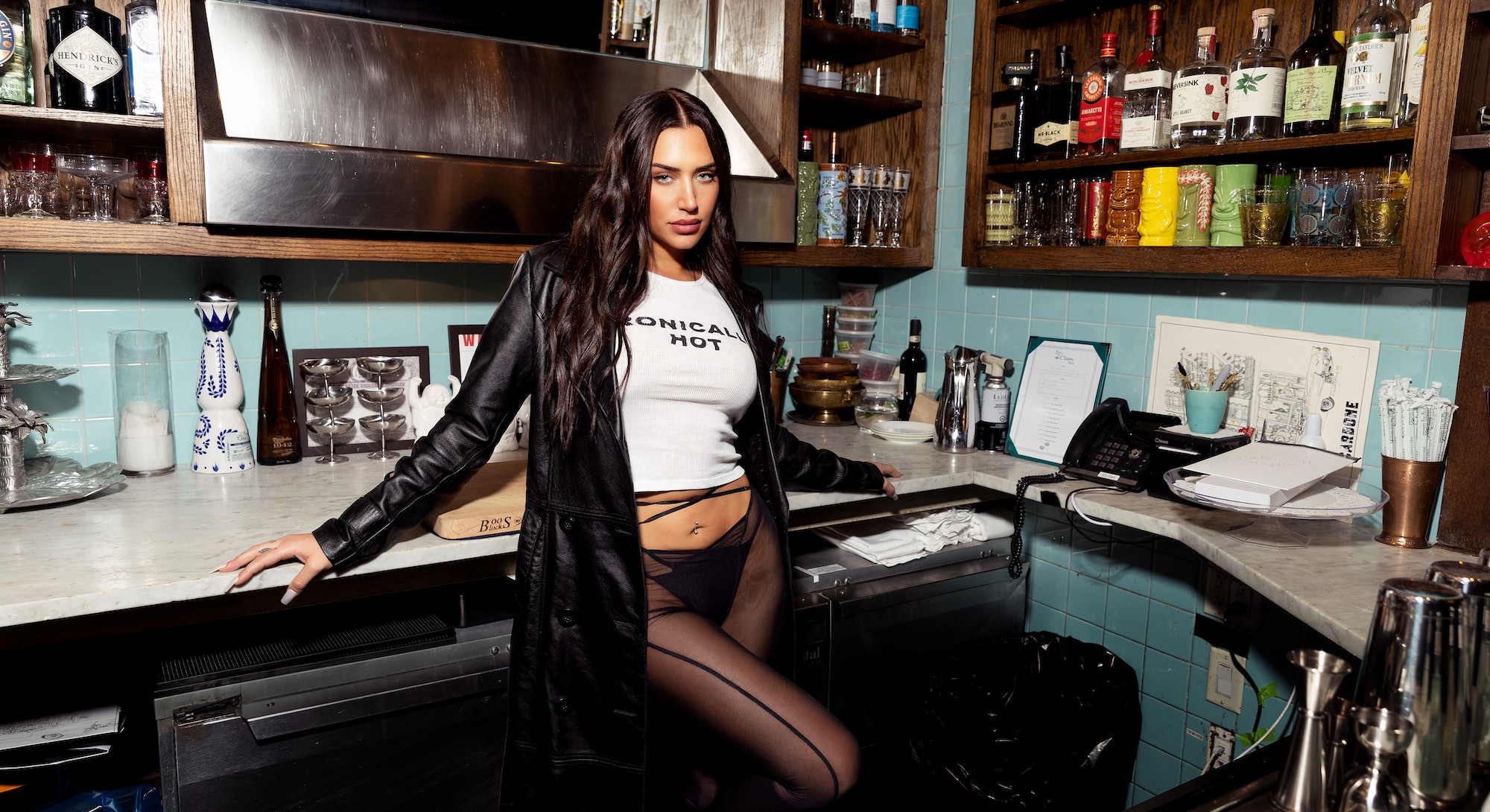 Ask just about anyone in Young Hollywood and they’ll tell you the same thing: The key to any good night out is Stas Karanikolaou. For the perfect evening, you need the planner, the life of the party, and the mom of the group. Karanikolaou is all three.

When we meet for dinner on a recent Thursday in New York, it’s pouring rain and only 6 p.m., but Karanikolaou arrives ready to get the night started. When we get to our booth in the back of notorious celebrity hangout Carbone, she quickly orders a vodka soda with extra lemons, and when it comes time to place our order, she takes full control. This isn’t her first rodeo.

Do we like oysters? Should we get half a dozen? And maybe we can try to find the smallest ones? And let’s do the beef carpaccio. Caesar salad, spicy rigatoni — There’s a brief debate about how many orders of the establishment’s famous pasta to get; Alex Cooper is joining us shortly and has already requested that we get it, but two orders seems like overkill. Our waiter kindly suggests one and a half servings. — Great. A side of meatballs. Oh, every time I come I ask for a buttered pasta, but it’s not, like, buttered pasta. It’s creamy and fancy and yummy. So let’s do that?

Somehow we also land on the Dover sole. “That’s a lot of food,” Karanikolaou concludes, but her main goal here, as it is with every night on the town, is to make sure the whole crew is content. “Everyone thinks I’m a stuck-up b*tch,” she tells me later. “But I just wanna f*cking love and have a good time and for everyone to be happy.”

If the name Stas Karanikolaou isn’t ringing any bells, then the name Stassie Baby might — for over a decade, it was her Instagram handle and the name she was widely, affectionately known by. Earlier this year, she changed it to @staskaranikolaou. The update made headlines, and even prompted an episode of Call Her Daddy titled “RIP STASSIE BABY.” “I just felt like it was time to end the era,” she revealed on the podcast. “I’m not a baby. I want to be taken seriously.” When you Google “Stas Karanikolaou,” the second thing that comes up is: “What is Stassie Baby’s real name?” The first is “What is Stassie Baby famous for?”

Karanikolaou will be the first person to admit that those kinds of questions are valid — and that the mystery is part of the appeal. “We are around everyone. We are always around,” she says of herself and Zack Bia, her close friend and fellow subject of many “Who is [insert celebrity name]?” SEO articles, who hang out with A-listers like Drake, Hailey Bieber, and various Kardashians on a nightly basis. “People are confused how we are always everywhere. If I were an outsider, I’d be like, ‘How are they with all these people at all times? Who are they?’ And then there’s the unknown. People don’t actually know us.”

After years in the limelight with Instagram as the public’s only insight into her life — Karanikolaou hates interviews, which give her intense anxiety — she’s aware that some common misconceptions about her have become larger than life. “Everyone thinks I’m this rich girl from Calabasas who grew up with Kylie [Jenner],” she admits. “In reality, I grew up outside of Calabasas, my mom is a recovering drug addict, and I did not grow up with money. I just capitalized on Instagram when it started, and started getting brand deals.”

Yes, she’s still immensely popular on Instagram, where her 10.9 million followers can stay up-to-date on her latest outfits and outings. But 10 years in, there’s way more to her than just social media. “Instagram is not even a fraction of someone’s life,” she says. “You’re seeing just the best photo. I could be having the worst day and depressed as f*ck, but it doesn’t look like it because I can make a face for five seconds. So in a sense, yes, [Instagram is a persona], but I don’t like to think about that. I don’t read my comments, I don’t look at my DMs. Half of them are spam, and half of them are guys saying they want to f*ck me. And most of them are mean.”

While Karanikolaou is still every bit the bombshell she seems online IRL (tonight’s ensemble includes sheer tights with a black thong underneath and a T-shirt that says “Ironically Hot,” cropped to show off her crystal belly button ring), she’s more petite than you’d expect; she’s slightly shy at first, but incredibly warm, welcoming me with a hug and apologies for running a little bit late. Within the first 15 minutes, we’re talking about the woes of dating in 2022, which, yes, even Karanikolaou has. “It’s hard for me to find someone attractive unless I get to know their personality,” she says. “That’s why I can’t do dating apps. All my friends send me guys on Raya, and I used to have it, but I would just never ‘heart’ anyone. The only time I almost hearted one guy — and he wasn’t even that cute — was because his bio was like, ‘Do we all just have this app to see who is on it and never heart someone, and when you do heart someone, no one starts a conversation.’ I almost said, ‘I like your bio’... but then I just didn’t.”

We talk fashion, namely her recent trips to both Milan and Paris Fashion Week, where she attended major shows like Balenciaga and Valentino. “I feel like this fashion week, I really tapped in,” she says. “I’m getting a lot of shows that I was so excited to do.” (And regarding Kanye West’s claim that he’s the one who got her into the Balenciaga show? “He didn’t.”) Over the years, Karanikolaou has done collaborations with various brands, including Dime eyewear, Ego shoes, and Kylie Cosmetics. If she were to debut her own line, she considers herself “definitely an accessories girl,” and currently has a home decor line available at HomeGoods, Marshalls, T.J. Maxx, and Ross.

Part of the transition from “Stassie Baby” to Stas came from her desire to be taken seriously as an entrepreneur. “In 10 years when people Google me, I want it to say entrepreneur,” she says. “Sexy entrepreneur. And mom.” (Of the latter, she notes an “intense feeling of baby fever. I desperately need a child in my stomach, yesterday. I feel like I was made to be a mom. I have my group of guy friends and they literally call me Momma.”) In 2020, she launched her first company, Sunny Vodka, alongside Bia. “We’ve been drinking it for so long, but then, when COVID happened, we had to stop working on the launch,” she recalls. “Me and Zack, we go out together. We run the family of our friends to go out. We facilitate the night and plan everything. It’s like a family thing. It just makes sense we would do this together.”

Over the years, there have been multiple offers for her to do a reality show. It’s something she might consider at one point, but for now, she’s trying to keep some parts of her life to herself. “I have the worst anxiety, and I don’t know if I’m ready to have people that much into my life,” she says. “I do feel that to do something like that, you need to be so OK with everyone knowing everything about your life for it to actually be successful and for people to be intrigued. I’d rather get into acting than do a reality show. At least then I can play a character.”

It’s been something of a time of transformation for Karanikolaou, too — higher fashion, bigger deals, next steps — and it’s something she is still navigating. Sometimes even the life of the party eventually needs a night off. She orders a double vodka soda as we get ready to head out, decidedly too sober to go to Madison Square Garden, where she’ll cheer on Bia as he opens for Post Malone with a DJ set. The plan is to go to another club later for Bia’s after-show gig, but she’s not sure if she’ll make it. “I don’t know what it is, I haven’t been in my drinking, going out phase since I got to New York. I feel like I’m growing up. I went to Marquee for two seconds last night, and I had to leave. Everyone was shocked,” she reveals.

Even in Paris, she marvels, she only had two wild nights out — and even then, only drank a few glasses of champagne. “Something switched in me… we’ll see how long that lasts. Next time you see me in L.A., I’ll be out, and you’ll be like, ‘B*tch! I thought you were growing up.’”