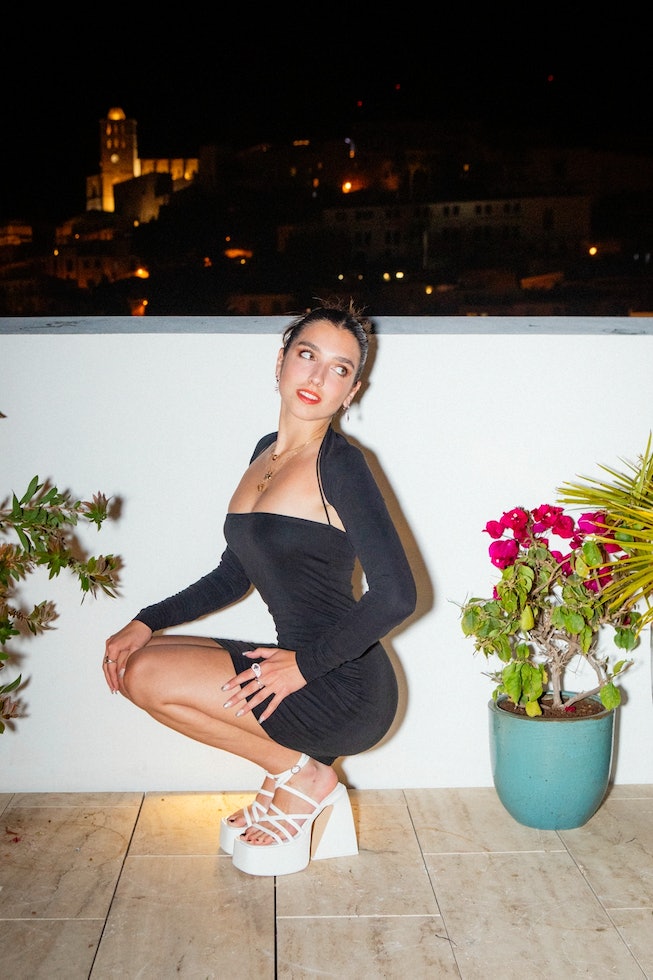 Rina Lipa’s look for the evening is “easy, breezy” — her hair pulled up in a high bun, a black mini With Jean dress punctuated by piles of jewelry — and for good reason: she lost track of time. “I went shopping, just a tiny bit. So I was also just a tiny bit late.”

It’s 10 p.m. in Ibiza and by all accounts Lipa is right on time — we’re sitting on the rooftop of The Standard Ibiza as its opening night party is just getting underway. “I love it here. The second we got off the plane and were hit with that wind of the heat…” she says, settling back into the couch with a sigh of contentment. “We've really just been running around, grabbed a little bit of brunch, chilled by the pool. Had a little kiki with everyone else who's staying here. I'm very excited to be here tonight.”

The 21-year-old model and aspiring actress (and sister to singer Dua Lipa) is among the hundreds of guests milling about the new hotspot located in the heart of Ibiza’s Old Town. She stands out from the crowd, thanks to her striking Kosovian looks and staggering platform heels, but mingles with ease, weaving through the crowd to snag a drink before heading to the dance floor for the majority of the night. Lipa is here to have fun — consider it the unofficial kickoff to her summer.

“I'm such a night owl. I love a good night out in London, but I also love a good night in, too, with a film and a tea and a book. I'm so happy with both,” she says. Her favorite place to go out in London is SoHo, she notes, because “I just know it so well, it’s like the back of my hand.” “The Box is so fun,” she continues. “It’s so f*cked up that it's fun. The stamina is crazy. People are there ‘til like seven in the morning, and then people turn to me, they're like, ‘You're 21 though. You can do it!’ I'm done at 5:30. I'm like, ‘I'm going to head to bed before the sun comes up.’"

The key to a perfect night out, according to Lipa, is simple: “You need to be surrounded by your bestest of friends. If you're surrounded by the best people, you're just having the best time even at the shittiest bar, shittiest club. And then also a tequila soda lime doesn't hurt, does it?” Shots are approved, she continues, but only tequila — never vodka — and sometimes Grappa, but only when in Kosovo. “Grappa's very common in Kosovo and Albania. You go to the seaside and you have dinner, and then you have a little bit of Grappa,” she says. “Only to sip on, though. You can only sip on it because it might burn you. It'll burn your insides.”

Lipa, who was born in and now resides in London, spent the summers on the shores of Albania. “All the kids that were my age, we would all go out to the beach together and play together and come back home together,” she recalls. “I’d say, ‘Oh, Mom, I'm going to go play with this girl’ and I went. You know? It was a very safe environment to be in. And the beaches are so lovely.” She’ll head back there this summer before returning to drama school, where she is going into her third year.

“I wasn't really supposed to go to uni,” she explains. “When COVID hit, I was in my gap year, and I kind of cut it short. No productions were on. No auditions were on. Things aren't really happening in the creative industry. It took such a toll. So I was like, ‘F*ck it. I'm going to go and study my craft.’ Now two years down the line, I'm able to study, as well as doing my job and working and doing my thing, which I'm very lucky for.” More importantly, she notes, she’s met her best friends, as well as her boyfriend, who is currently downstairs in the room getting ready. “I've never actually been on a dating app,” she adds when I ask how they met. “I have been very lucky in my life.”

She’s no stranger to the perils of screen-based interactions, though. Lately, all acting auditions have been self-taped, a formality widely despised by all thespians. “There's something about walking into the room and saying, ‘Hi, nice to meet you,’ and having that energy and that aura and that little repertoire between people,” she says. “You can leave feeling like you had a connection if you walk in and you're a bit bubbly and you are happy to be there. I'm really happy to do really fun auditions. Even if I don't get the job, that's absolutely fine.”

Come fall, hopefully things will be in-person again, but for the time being she has a short-term goal in mind for the remainder of her time in Ibiza: getting a proper tan. “I want to be like a rotisserie chicken, just turning around and around, oil on,” she says. “That’s perfect.”

NEXT UP
A Night Out
A Night Out With Rachel Bilson
Culture
Caroline Polachek In KNWLS & More Party Photos You Missed
Nylon Nights
Latto Gets Ready for Spotify’s Best New Artist Grammys Party
Nylon Nights
How Renzo Rosso Turned The Pelican Hotel Into A Miami Must-Stay
Style + Culture, delivered straight to your inbox.