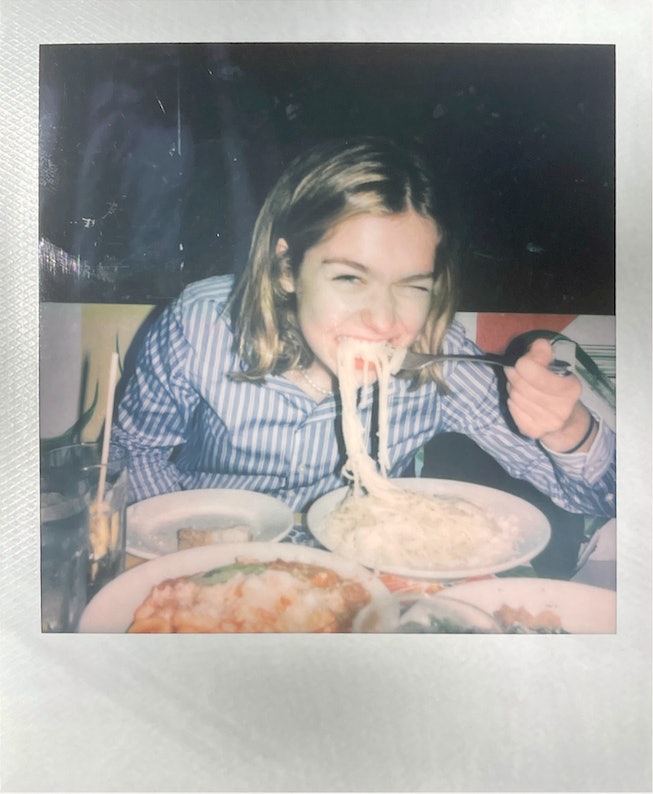 Lately, Lindsey Jordan has been trying new things. Tonight, it’s Lil Frankie’s famed spaghetti limone. “I’ve heard about it but never been” the Snail Mail singer texted me earlier of the East Village staple when determining where to get dinner (Italian was her suggestion). The cash-only and perpetually busy restaurant’s signature dish arrives at the table covered in parmesan and garnished with a full half lemon. Jordan takes the first bite. Her verdict: “so good.”

After digging into our full spread (the order: spaghetti limone, a tuscan kale salad, gnocchi pomodoro, and Diet Cokes), she pulls out her phone to show me something new from her end: the music video for “Benjamin Franklin,” the latest single off her forthcoming sophomore album Valentine, due out November 5th on Matador Records. She’s just gotten the final cut, having spent the afternoon at the director's Brooklyn apartment, and is eager to see how it turned out. “I took dance lessons for this,” she says as we both peer over her iPhone. “Three of them. There was some serious choreography.” In the video, out now, she twirls around a suburban home, at one point adorned with a yellow python that could be sisters, or at least distant cousins, with the one from Britney Spears’ iconic “I’m A Slave 4 U” VMAs performance. In it, she wears a cable knit sweater, pearls, and a striped Ralph Lauren button down (the latter two of which she also happens to be wearing tonight). The preppy look comes courtesy of a new stylist she’s collaborating with, Alexa Lanza. Lanza has only worked with one musician prior to Snail Mail, Jordan notes: Rihanna.

All of this: the pearls, the snakes, the dancing, is part of the new Snail Mail. On Valentine, she proves that she’s more than just the teen savant who broke out 18 with her debut album Lush: at 22, she’s one of music’s great soothsayer’s, a poet laureate for the indie set who can turn intimate confessions into universal hits, without losing the grit and honesty that first made her a star. On the record, she tackles new territory head-on — primarily, a 2020 rehab stint (“Post-rehab, I've been feeling so small/ I miss your attention, I wish I could call”). But with the experience comes growth; her voice and singular POV has never been stronger. Here, over bowls of pasta, Jordan breaks down the making of the new album and what it took to get to Snail Mail 2.0.

First things first, how are you? How are you feeling? It’s been three years since Lush and you’re just now starting album promo again which must be jarring, especially after this first year.

Good, and hectic, and complicated. I don't even know how open you're supposed to be about this, but I've been working with a media trainer, because the content of the record is very heavy and intense, and so it is such a different thing. I feel like last time I was in interviews and stuff, I was just like, "I'm a teenager, this is me." And now I feel a little more like a politician. There’s preparation before hopping into an interview.

Do you think that feeling comes from the inevitable pressure and anticipation of a second album, or just from getting older?

I am older now and I have a way that I do want to present myself. With content of the record being as intense as it is, I do feel like there has to be strict limits and boundaries as to how far I'll go [in interviews]. I’m very vulnerable in the music, and that's as far as I want to go, and I was very conscious of the line that I was towing in the music itself. On the first record, I didn't even use female pronouns in the songs because I wasn't even out when I was writing those songs — I was at high school, but not publicly.

The album art and visuals so far have been super high-concept compared to Lush, and you’re working with a stylist for the first time — is that part of this idea of keeping parts of yourself to yourself? Dressing up as armor, in a sense?

Alexa and I have done so much collaborating that I do feel like what you're seeing is me, and it's very personal. I'm very picky. In a way, presenting really clean and proper, is helpful for me, because I don't necessarily want to be a loose cannon. I don’t want to present all of my personal self out there, which is why I'm not on Instagram.

Have you felt pressure to get back to posting regularly on social media because you have the new album to promote?

It's like a never-ending conversation, whether I should be posting it today. And I think I'm pushed towards only posting when it's necessary, or like if I'm really feeling myself in a picture or something. Having nothing but social media to be out and about during the last year I felt a little over-exposed and over-saturated with Snail Mail content, even though there was none.

I was so about it, and then I just took a step back and realized that there is an unconscious need to be all over the internet and stuff. It's almost a marketing [tactic], Instagram and stuff like that. I started to realize that forming connections that way with fans and stuff, it's just a performance connection. And I just said, "F*ck that, it's weird." If I'm going to connect with people on any level, I would rather feel like it's genuine. Not to be like, "We live in a society" but we are in a weirder position, societally, than I think anybody even realizes. Like, when you take a step back, it's like all faking showing our real selves on the internet, to get people to feel close to us. It's kind of manipulative.

You finished the album way back in February, but it’s just now coming out. What was that waiting period like for you?

I heard whispers of there only being one vinyl plant in the entire world left, and so like, it's like a line that you have to wait in to get your stuff pressed. That’s the real reason. But It's been nice to have time to get my sh*t together. Sometimes you turn something in, and then you have to churn it out. Having that time was ultimately a good thing, because I really do feel like in order to do a record cycle, your sh*t just has to be unbelievably together. I don't think you can be struggling with anything, really.

How does that mindset apply to tour? Are you looking forward to it?

I'm really excited. we're really tight as a unit right now. We've been practicing for months, and months, and months for sessions and stuff that we've got to do. We have a bus now, which is really cool. It’s just a bigger production. there's more band members, there's a big crew. I haven't felt like myself in that way in such a long time, and I'm really excited to see how different it'll be from the last tour. I’m a lot more responsible.

Do you think all this want for bigger production and the like come from the want to show people you’re no longer that teenager they first were introduced to?

There is something so fun about being a teenagerr. I had this attitude that I was like, "Look at all these label people, look at all these business people. Who cares, I'm going to get super drunk at the company party." And now, to not look at a hot mess, to not be drunk at the company party…. I definitely am not jumping at any opportunities that make me look immature, to not look messy. It's so weird how it shifts.

It’s a stranger lane than a traditional career, obviously, but at the end of the day this is your job.

Totally. Making boundaries with friends about Snail Mail makes me always realize how much of a job it is. I don't ever let my friends, or anybody, watch band practice or anything like that. The show itself feels less than ever, to me, like a party, and more like something I really need to rise to an occasion for. Lots of hard work has gone into the live show, so I definitely feel like I have to bring that. I'm going to try to sleep a lot, and just drink a lot of water.