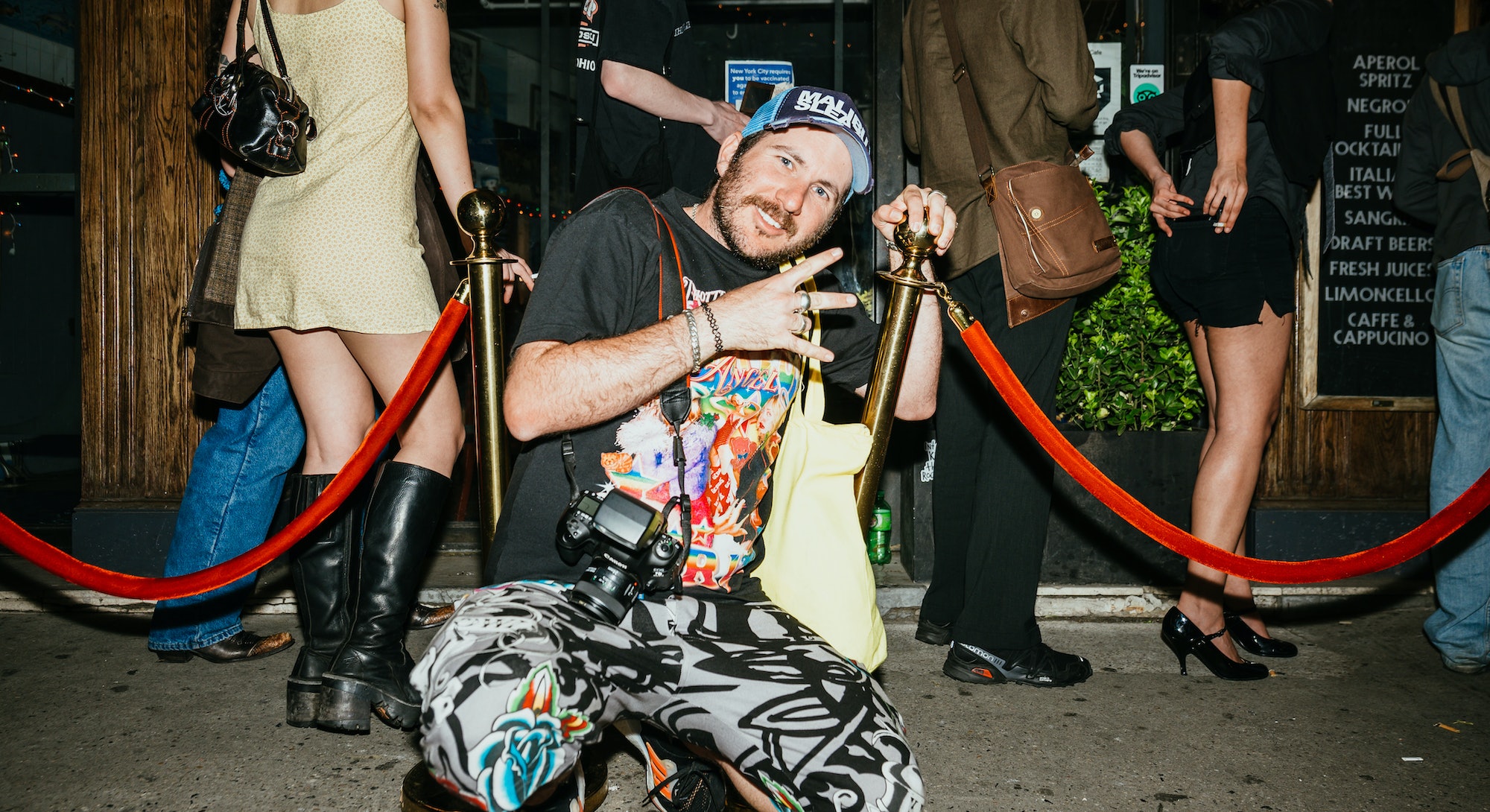 It’s possible that Mark Hunter, better known as the Cobrasnake, is one of the most prescient figures in recent pop culture. Years before the dawn of Instagram, Hunter capitalized on our collective FOMO by uploading candid, colorful photos he took at parties to his website the following morning, offering the online masses a rare glimpse inside what was still an exclusive young Hollywood scene. When fashion week events and music festivals weren’t yet engineered to create a stream of viral social media moments through smartphones, Hunter was in the front row and backstage, capturing the fleeting magic firsthand.

Through these images, a new class of It girls was introduced; before they appeared in magazines and ad campaigns, they modeled for Hunter’s own secondhand clothing enterprise, called the Cobrashop, which he shot, sourced, and styled on the side — a clear predecessor to sustainable, Gen Z-beloved shopping platforms that would later emerge, like Depop and Poshmark. Now, just as a whole new generation’s fascination with the early aughts “indie sleaze” phenomenon is hitting fever pitch, Hunter’s photography book, The Cobrasnake: Y2Ks Archive, is gearing up for release next week.

“They call it being ahead of the curve or ahead of the trend, and sometimes I feel like, unfortunately, I was too ahead of the trend,” Hunter says on a recent Thursday night in downtown Manhattan, a couple of hours before he’s set to shoot and host an after-party for emerging designer shopping platform Retail Pharmacy. He partly credits the good timing of the book release to divine intervention, as pandemic-related delays eventually aligned with the growing interest in all things Y2K — and, of course, a return to all-night, IRL partying. “The funny part is that I feel like I'm in my second coming, almost in syndication. I’m a staple within the fabric of the ‘indie sleaze’ wave, so you can’t resist me if you want to be accurate in all this. I’m also having a lot of people that said, ‘Oh, I met you. I was 16, and I’m turning 30, and I need you to shoot my Y2K-themed birthday party.’ It’s coming full circle. I shot so many people over the years that have gone on to do amazing things, and then they have a fond memory of meeting me and the photos that I captured at a younger time in their life.” Now 36, Hunter is still something of the poster child for aughts fashion, like Ed Hardy T-shirts, trucker hats, and clashing prints — pieces from a decades-old collection that suddenly feel fresh again. “I’m re-educating a new generation, which is exciting for me, and it’s also a challenge,” he says.

His book, out via Rizzoli on June 7, required Hunter and his team to comb through almost 15 years’ worth of images. They ultimately decided to focus on the period between 2004 — when Hunter started his first site, The Polaroid Scene — and 2010, when Instagram was founded, three years following the debut of the first iteration of the iPhone. “We felt like social media really took over [then], and there was a true change in the imagery and style,” he explains. “In the early years, you're seeing people with BlackBerrys and Sidekicks. The fashion is just a bit different. I tried to include and paint the most diverse picture of things that I shot.” The book is heavy on celebrities (think Katy Perry, Paris Hilton, Chloë Sevigny, and Mary-Kate Olsen) and on Hunter himself, as he saw this as an opportunity to celebrate and document his own youth as well. While everyone depicted in Y2Ks Archive looks positively ecstatic — a Cobrasnake signature — the process for getting the photos approved for print was no picnic. “One of the things that was really tedious was doing all the releases, going back and contacting everybody, getting permissions,” Hunter recalls. “This also happened in the era of everyone being canceled and consent and all this stuff. There were a lot of people who were less than excited to be reliving this, because they’re like, ‘Oh, I don’t want anything to do with my past.’”

Evolving the Cobrasnake brand for a post-social media and post-COVID world was easy for a marketing mastermind like Hunter, even though he admittedly didn’t jump on the Instagram bandwagon as quickly as others, and spent a few years away from nightlife due to some professional burnout. He now hands out bubblegum-pink business cards to guests at the events he shoots, printed with both his website address and Instagram handle, encouraging people to find, repost, and tag the photos they’re in, spreading them far and wide. “I’m coming back refreshed and renewed and feeling a very warm welcome — I feel like I’m being welcomed back into a stadium full of people,” Hunter says of his return to the party scene. “It’s being celebrated in a really great way in terms of the reactions I get from people I meet. I realize that this is a new generation that didn’t have digital SLR content. They're all on their iPhones, and they don’t take good nightlife photos. So the fact that you can have somebody else doing it is elevating it in a way.”

Watching him navigate a party is to witness a master at work. After getting the lay of the land, he quickly moves through the room, introducing himself with a smile and encouraging revelers to pose with their friends, or snapping pictures when no one seems to be paying attention. He’s able to capture the dynamic moments that make any party memorable by innately knowing where the action is: by the front door, where guests squeal and embrace as new people walk in; on the dance floor, where spirits are high and inhibitions are low; and outside, where groups gather for some fresh air and a chance to chat without screaming over the DJ.

Hunter likens himself to Pokémon collector, an expert at capturing all of the unique characters in attendance at any event he shoots. “I’d say everyone always credits me for my photos looking more fun than the party was; even today, I’ll shoot a party and then I’ll see the person tomorrow and they’ll be like, ‘Dude, that wasn’t as fun as the photos,’” he says. “I pat myself on the back for being good at getting energy and stuff out of people.” Getting photographed by the Cobrasnake back in the aughts was a signifier of cultural clout, and in today’s content-obsessed climate, it’s no surprise that Hunter, always armed with his camera, is still a very popular addition to any gathering. People light up when Hunter approaches them, and if strangers sheepishly introduce themselves, he enthusiastically engages and snaps a few shots, his positive vibe making everyone feel included.

As for what catches Hunter’s eye when a party is at its peak? “I’ll instantly be drawn to any characters on the floor, outside on the curb, whatever,” he reveals. “If you’re on the floor, you’re on the blog. Or if you’re dancing like it’s your birthday. Those would be the two things that I always look for.” But after nearly two decades in the game, he’s an expert at pointing out who’s posturing for his attention. “It happened a lot back in the day, and people ask about it now; it’s like, are people acting to the camera, or are they trying to play up? I always still try to capture the most real energy within that,” he explains.

The demand for nightlife photographers is on the rise as parties come back in full force, and you never quite know what type of gig Hunter will book on any given night. From corporate branded events to avant-garde fashion presentations to underground raves, he’s up for it all, and will hit as many locations as he can before the sun comes up. “I’m this sort of hot commodity when I come to town,” he says of his comeback. “I don’t live here [in New York], and so it’s a novelty that, oh, man, the Cobrasnake is coming to the party! Everyone’s excited to have their photos taken.” He accepts DM invitations, and stays connected to young people he meets at these parties to remain clued into what's going to be “big” next. Hunter got his start by sneaking his camera into concerts and eventually getting the attention of the bands he’d shoot, so he hopes to pay it forward by mentoring young photographers who are looking to get a foot in the door, too.

While Instagram- and influencer-free parties seem like a thing of the very distant past, Hunter doesn’t see the prevalence of branded events as a deterrent to actual fun. “The way I like to look at it is that this is now a new body of work and shooting after COVID — we look back at this 10-year era from now until 2030, and now we’re living on the moon,” he explains with a smirk. “And we’re like, ‘These were the last parties on Earth. Holy f*ck.’ Who cares if there were a few sponsors? Now we’re literally tattooed with the sponsors and are contractually obligated to say Tesla 10 times a day or something. I think that there was this onslaught of commercialization of nightlife culture, branded activations, all that. But that doesn’t mean people can’t still have a fun time — and I can still get fun photos at those events.” And as Hunter knows better than anyone, the next party is never far on the horizon. “Yes, there’s all these corporate parties, but there are things in warehouses that don’t have any sponsors, there are after-hours parties that I’ve been going to in L.A. until 5 a.m., and it feels like 2007. It’s just for pure dancing, partying, smoking, whatever you want to do, anything goes. I’m sure in Bushwick there’s things happening like that where a brand can’t touch it even if they wanted to.”

Around 1:30 a.m., the crowd at Hunter’s party starts to thin out, as guests head home to beat the rain or make a move to the afters. Confident he got the requisite hundred-ish usable photos to upload later in the morning, he hands out a few last business cards, gathers his camera bag and overstuffed tote, and gives some farewell hugs as he moves towards the door. Aside from the upcoming book launch and a jam-packed party schedule, Hunter’s busy redesigning and relaunching his website with over half a million photos — a true searchable time capsule from the “indie sleaze” era that will continue to evolve as he documents our current time. Though Hunter is fully focused on priming the Cobrasnake for the future, he’s pleased to see some of the Y2K spirit shine through as the world opens back up — people partying just to have fun and down to look a little messy, a departure from the perfectly polished Instagram aesthetic that reigned pre-pandemic. That, after all, is what Hunter’s work has always been about. “I’m really proud that we celebrated everyone’s individuality,” he says. “Everyone could be just living their truth and celebrating who they want to be without any boundaries. There was some freaky sh*t out there.”