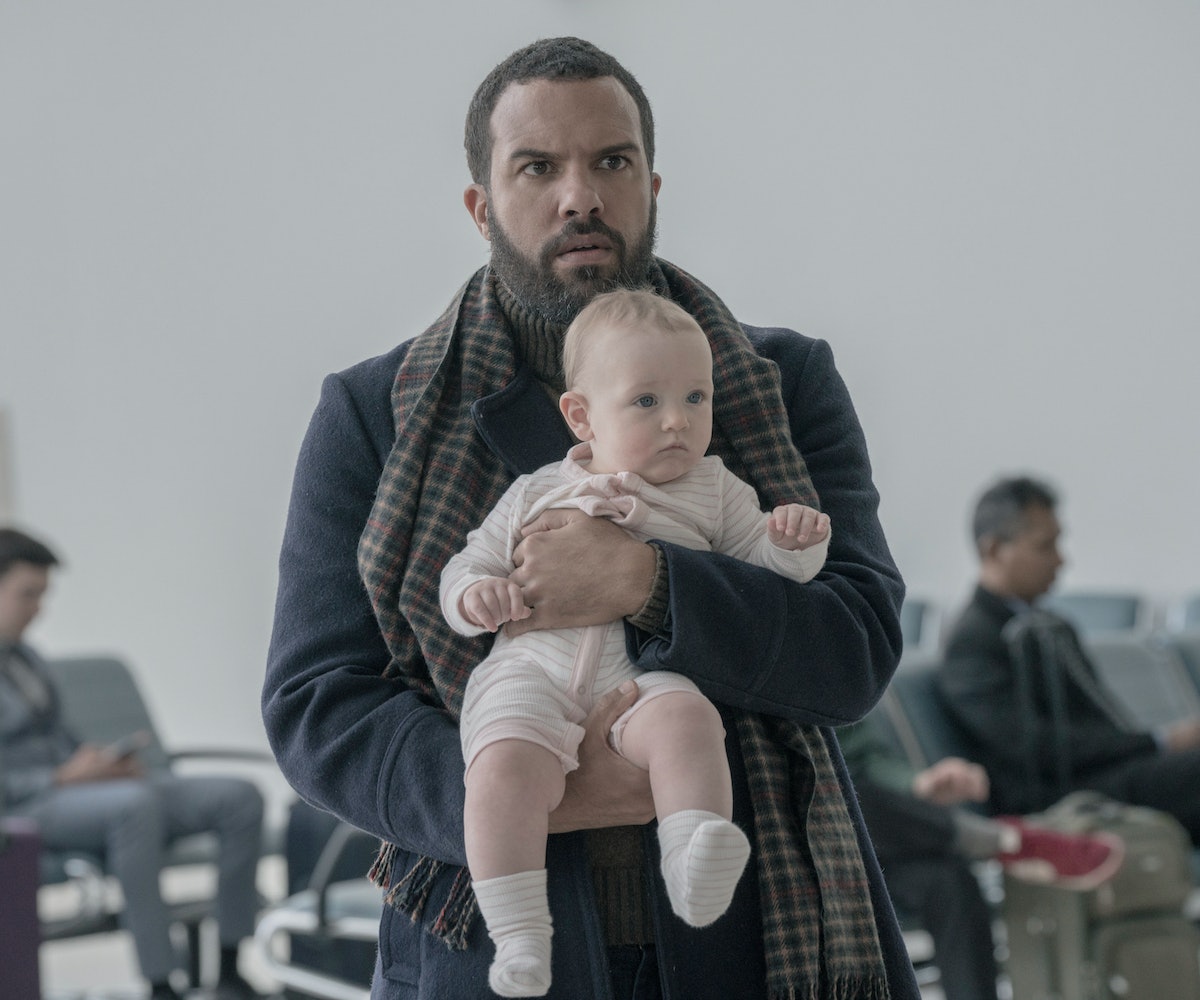 At the center of Gilead's oppressive regime in The Handmaid's Tale are babies. In this fictional universe, after infertility became a widespread epidemic in the United States, a group of religious extremists staged a coup against the U.S. government, cut women off from streams of income, and rendered them completely subject to the power of men. All this was said to have been done in an attempt to facilitate the birth of more babies. Fertile women were forced to become handmaids, who were raped and made to act as surrogates for powerful couples; this horrific act is justified as being utilitarian, an unfortunate means to an end. But because Gilead is a religious society, it's viewed in terms of god: The act of rape becomes one imbued by god's grace; the eventual child is a blessed gift from above.

O-T Fagbenle plays Luke, who was attempting to escape from the hell that is Gilead with his wife, June (Elisabeth Moss), and young daughter, Hannah. But while June and Hannah were captured and returned to Gilead, Luke made it to Canada. In the years since, he's struggled to build a life not knowing what became of them. Fagbenle describes Luke as being "dispossessed of his land [and] his family." In the latest season, that changes slightly, as Luke comes into possession of a connection to that land and family, when he becomes the caregiver for a baby that June had with another man back in Gilead, a baby that was seen as a blessing, a baby that was smuggled out of Gilead, into Canada, and into Luke's arms.

The complications that Luke faces as her raises this new baby—Nichole—are reflective of the way that the series demonstrates that few blessings are simple, they almost always have a dark side to them. Interestingly, this lesson isn't just part of the show, but is literally a part of Fagbenle's name.

Fagbenle's first name, O-T, is actually a nickname for Olatunde Olateju Olaolorun. Fagbenle told me that, in the Yoruban language, "Olatunde" means "honor has returned," and "Olateju" means that the "honor belongs to god." Fagbenle is the eldest of his siblings, but before he was born, his mother lost a child. His name is a tribute to the blessing of new life in the face of loss, a concept which parallels the Gileadean ethos that the enslavement of women in service of fertility is an act of grace—god's will.

Learning this made me feel like Fagbenle was born to be on this show, especially because he has a clear-eyed view on how our society is not succeeding at protecting women, telling me that men have "failed more than [they've] succeeded" at being allies, especially when it comes to sexual violence. Despite wanting to look at the glass as half full, Fagbenle had to admit that there's "still room to grow." As Luke, Fagbenle has the opportunity to play the ultimate selfless ally—it can't be easy to raise your wife's baby by another man, particularly when that baby isn't the product of rape, but of a consensual love affair.

But Fagbenle thinks Luke's head is in the right place where the baby and June are concerned: "Because Luke is a good person, he has to see that this as a preferable outcome. Because he understands the situation, he cannot hold against June any respite that she's managed to find."

Beyond The Handmaid's Tale, Fagbenle has been working on his own project, Maxxx, which he wrote, directed, and produced. It's about a former boyband member who "has his priorities all messed up" and continues to take Ls after his failed attempt at a solo career. "I'm fascinated with the society that we live in where we think being famous is the same as being respected," Fagbenle told me. "We think that likes on Instagram—because they set off signals in our brain that are similar to getting hugs—are the same as getting hugs, but they're not."