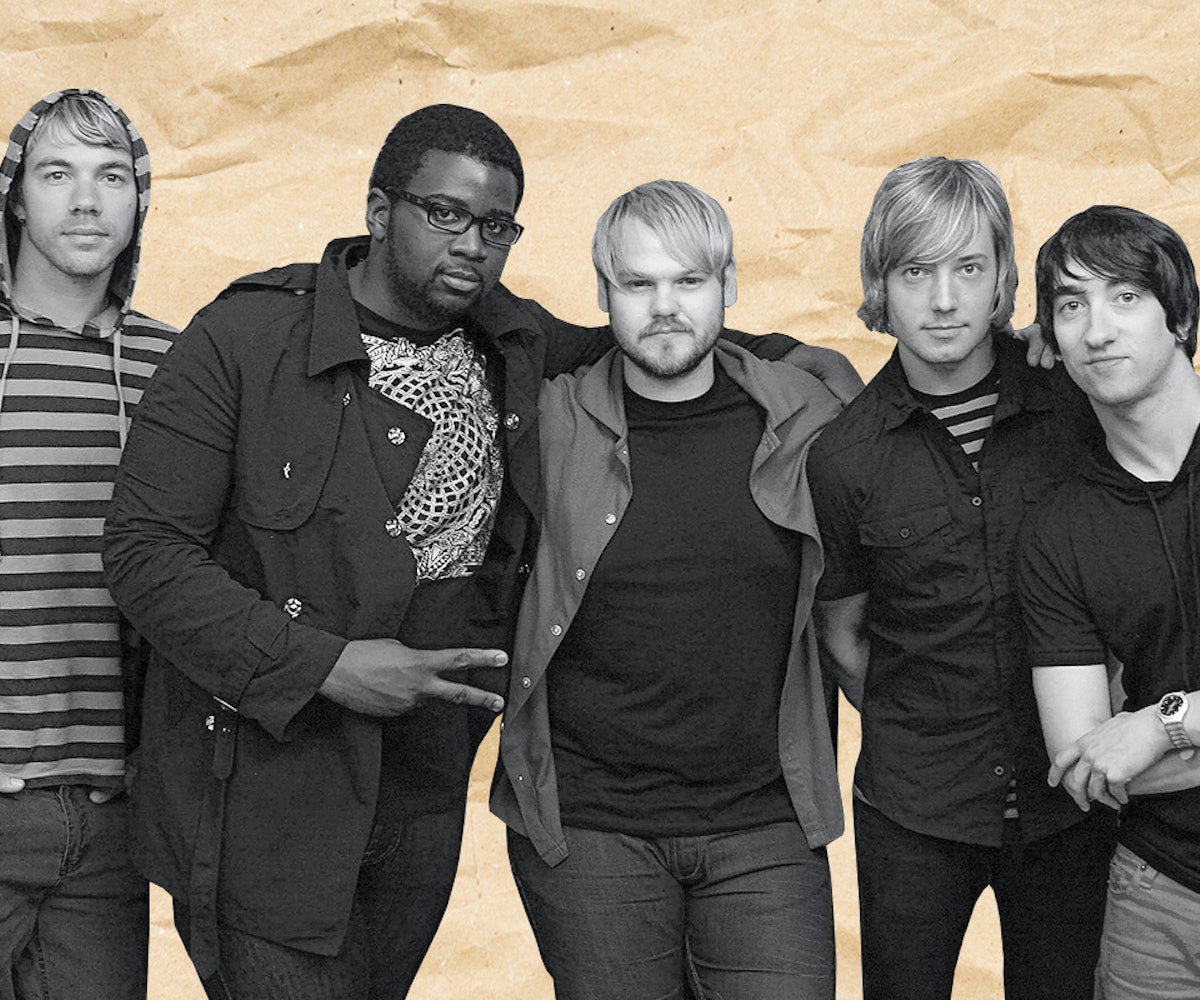 In 2005, The Plain White T's asked Delilah "what's it like in New York City," and that singsong question changed everything for the midwestern band. Their inescapable hit, which topped Billboard's Hot 100 chart in 2007 and earned two Grammy nominations in 2008, painted a rosy picture of young love surviving a long-distance relationship. The legacy of "Hey There Delilah" lives on today, nearly 15 years after its original release, albeit in a much less romantic way — through x-rated tweets and Tumblr posts.

The running joke goes something like: "Hey there Delilah / What's it like in New York City / I'm a thousand miles away but girl Snapchat me them titties." There are countless variations, many referencing Blueface's "Thotiana" or Tyga's "Rack City," that have been circulating the internet as far back as 2012.

"It's like ['Hey There Delilah'] never went away. It's still important to people and part of people's lives," frontman Tom Higgenson told Nylon ahead of the band's most recent NYC show in December. Through bouts of laughter, Higgenson, guitarist Tim Lopez, and drummer De'Mar Hamilton unanimously agreed that "Snapchat me them titties" is their favorite meme of the bunch.

"Who knew that 10 years later we'd still be relevant?" Hamilton said. "It's like, what?"

Snapchat didn't exist until 2011, but social media was always the backbone of "Hey There Delilah," the final track off All That We Needed. After seeing Plain White T's play at Warped Tour, Tom from Myspace put the song on his website's front page, attracting a loyal grassroots following.

"There was a moment where everyone's [Myspace] page you would go to had 'Hey There Delilah' as their profile song," said Higgenson, who was around 23 when he wrote the track in the suburbs of Chicago. The Plain White T's have released several commercially successful singles over the past two decades, and their latest album, Parallel Universe — a "2019 version of All That We Needed," Lopez called it, with standout tracks "Bury Me" and "Your Body" that might resonate with "Delilah" fans — came out last August. Although 2008's "1, 2, 3, 4" and 2010's "Rhythm of Love" both charted, nothing (so far) has reached the soaring heights that "Delilah" did.

"I do remember hearing that song for the first time," Lopez said. "And I do remember feeling like this is probably the best thing that [Higgenson's] written… Sometimes music gets in the way of hearing someone speak to someone else. This song is all about what's being said over this nice, simple melody."

What was said clearly struck a cultural nerve. Hamilton's favorite line — "Oh, it's what you do to me" — was initially a "throwaway," Higgenson revealed, but the placeholder became an earworm that got stuck in thousands of people's heads, for better or worse. ("By saying nothing, it says it all," Higgenson added.) Lopez favors another "smart lyric" — "Times Square can't shine as bright as you" — because it "really gives the woman's beauty a lot of credit in a way that hasn't been said."

Those words are even more meaningful when the band hits the stage in Brooklyn for the 3 Dimensional Tour. Back in the day, the real Delilah — Delilah DiCrescenzo, a cross-country runner and Columbia student at the time — would stop by their New York-area shows. Higgenson says he first met her in Chicago through a friend. He caught feelings for her, but knew she was heading back to NYC the next day.

"We kept in touch a little bit on AIM," Higgenson explained. "But when it came down to writing [the song], it was like, what's it like in New York City? Thousands of miles away, blah blah blah… Well shit, that pretty much sums up everything I know about Delilah."

The tender tune that high-schoolers learned to play on their acoustic guitars to stage grand promposals was not, in fact, about a real couple. "I had to really think about it, like OK, if I was in this relationship with someone long distance like that, where is my heart?" Higgenson continued. "What would I say to her? How can I finish this story out in a way that stays true to that beginning?"

Delilah, meanwhile, had a boyfriend. "She would bring her boyfriend to the shows, and he would pout outside," Lopez recalled, mentioning a specific night at Brooklyn's Knitting Factory. "You could see him through the glass… The crowd would sing that song [at] the top of their lungs, and he'd just be sitting there."

"He'd probably hear it from outside," Higgenson joked.

The singing just got louder. In 2006, they switched from Fearless to Hollywood Records for their next LP, Every Second Counts. The label's president came to their show, saw the crowd swoon over "Delilah," and was puzzled. "He's like, 'What the hell is this song?'" Higgenson remembered. "'Do we have this song? It's not on the record.'"

Hollywood snagged the rights to "Delilah," re-released it as a bonus single, and poured a ton of cash into its promo. The beloved Myspace gem morphed into a multi-platinum chart-topper, and the Grammys came knocking with nominations for Song of the Year and Best Pop Performance by a Duo or Group with Vocal. (They lost to Amy Winehouse and Maroon 5, respectively.)

To Higgenson, it felt like fate, because he once joked to DiCrescenzo that he'd take her to the awards show. When the song first hit mainstream radio, he had a girlfriend, and she was still with her boyfriend — but there was one brief moment when they were both single.

"Me and my girlfriend had just broken up. We got nominated for the Grammys, and I'm like, I gotta f*cking call Delilah," Higgenson said. "I haven't talked to her in a few months… I called her, and she had just broken up with her boyfriend. I'm like, let's go to the Grammys together. She was like, 'Hell yeah'… I almost thought, holy shit, is this going to happen four years later?"

Spoiler: it did not happen. They both got back together with their respective significant others before walking the red carpet, so their big Grammys date was "very platonic," Higgenson said.

However, anything could happen on the reported "Hey There Delilah" television adaptation, which was announced last August to mixed reviews — and then nobody heard of it ever again. When asked what he can share about that project, Higgenson's answer was short: "Jack shit. There's really nothing."

The idea came about after Higgenson worked on SpongeBob SquarePants: The Broadway Musical, which landed him a Tony nomination for Best Original Score. Him and several SpongeBob producers pitched a "scripted romantic dramedy" for "Delilah" to several networks, but nothing's panned out yet.

"Once the idea's out there, it could connect or catch fire at any moment," Higgenson said. "Someone gets excited, and then it just happens... Maybe it just wasn't the right timing for it, or quite the right idea, or the right partner yet."

The purported TV show put "Hey There Delilah" back in national headlines, and the unexpected throwback came with heightened scrutiny over the song's origins:

Vulture and Teen Vogue similarly called the song "creepy." Higgenson's response to these critics was equally honest: "F*ck you."

"She [Delilah] was playing along with it as much as I was," he explained. "I was poking, hey, I'm going to write a song about you, blah blah blah. She was like, 'Cool, where's my song? Play me my song.' So I don't think there was anything creepy. It was a bummer because she did have a boyfriend, so that's almost why it was this innocent— like OK, there's no pressure here, this is not anything besides like, man this girl is beautiful, and I want to write a song that she'll like… You're in love or you're crushing, or there's somebody that's inspiring you, and that makes you grab the guitar and write a song… It was just literally me in my mom's apartment writing a song about a girl."

At that point, the interview turns towards other topics, but Delilah comes up again after we chat about the viral memes.

"I just had a weird thought, but do you think actual Delilah does get uncomfortable about the Snapchat thing? Because it is talking about her titties?" Lopez asked the group.

"I feel like she's got to be disconnected a little bit from the joke at this point," Higgenson said. "So many years and as big as it's gotten, I think it's definitely transcended… I would hope she'd have a good laugh at it, but who knows. Maybe I'll ask her."