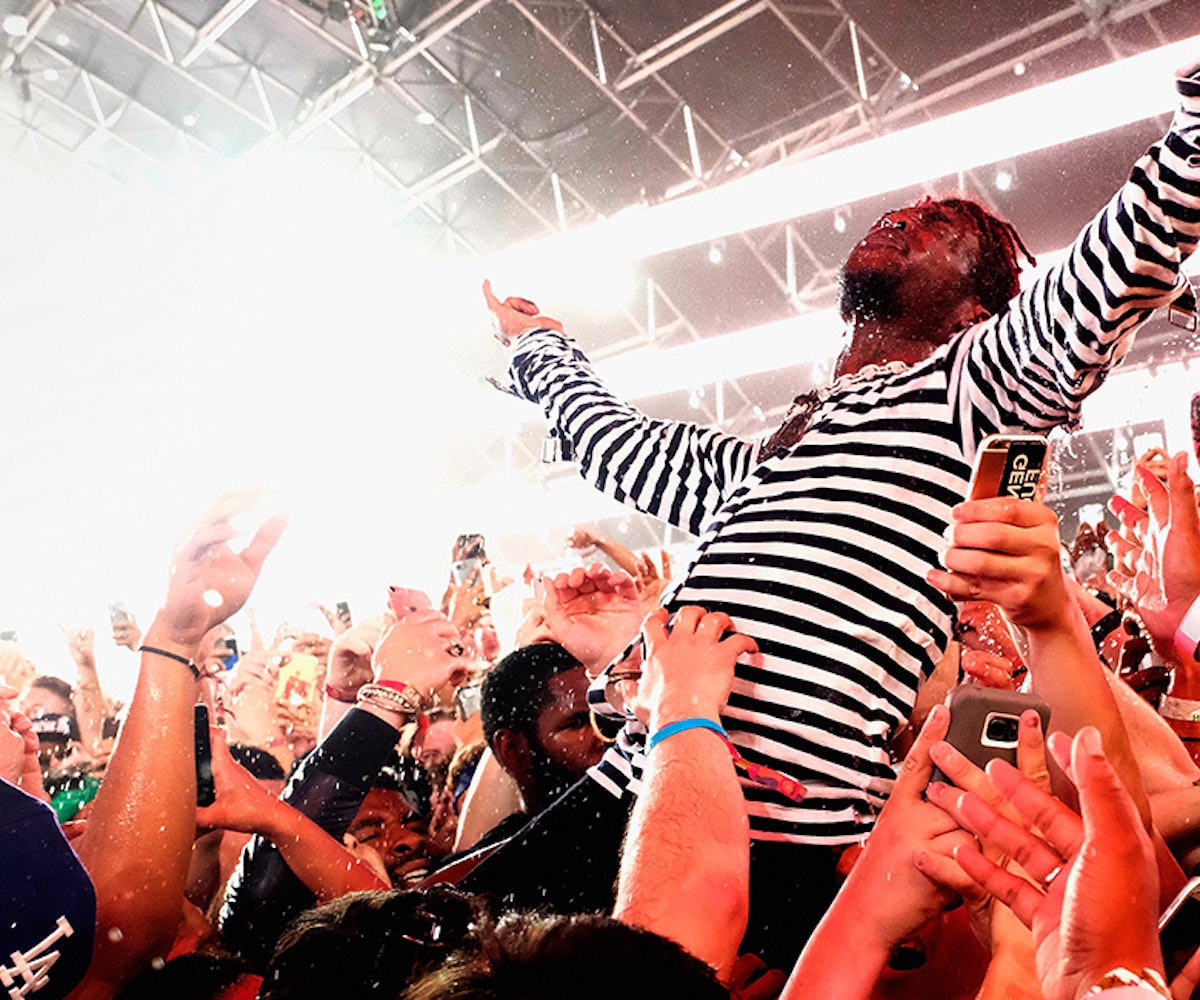 After seeing Led Zeppelin live for the first time, William Burroughs wrote in Crawdaddy magazine that rock shows are akin to a religious rite: "The essential ingredient for any successful rock group is energy–the ability to give out energy, to receive energy from the audience and to give it back to the audience. A rock concert is, in fact, a rite involving the evocation and transmutation of energy." In my experience as a music journalist and avid concert attendee, I tend to lean into Burroughs' assertion, but, as a Southern Baptist preacher's daughter, that leaning doesn't come without inquiry.

Music and religion share more than just feelings, they have a similar lexicography: The word "frontman" was initially used to describe a preacher—you know, the man at the front of the church, the one leading the congregation. So, although I've fallen in fandom over many frontmen in my life, my first, and arguably favorite, is my dad. That aspect of my upbringing has had more than just a slight impact on my daily experience, including, but not limited to, my mother asking me at least once a week if I've been going to church, and if so, which one and how often. Admittedly, like many adults who grew up spending more days than not in church, I would define myself as more spiritual than religious on the grand spectrum of beliefs. However, I do believe I've supplemented my lack of church visits with something that gives me the same feeling of well-being, connection, and spiritual fulfillment: concerts.

Despite my personal inclination toward guitar solos over hymnals, the benefits of attending church extend beyond spiritual fulfillment. The New York Times ran an editorial which cited some of these benefits: "Religious attendance—at least, religiosity—boosts the immune system and decreases blood pressure. It may add as much as two to three years to your life." But then, similar reports have been shared on the benefits of live music. Quartzran a story on how neuroscience has proven that listening to music can have the same health and stress-relieving benefits as the spiritual practice of meditation. Another study found that going to live shows can increase your sense of well-being as well as your life expectancy. So, is attending a concert comparable to attending church? It depends on who you ask.

"I considered myself to be religious up until my junior year of high school. But, the part of it that I always connected most with was the music," music journalist Kristy Guilbault shared when I asked her about her Methodist upbringing. "I was starting to go to concerts, and I was finding that I could still experience music and the social aspect surrounding that outside of the church and find a community who have values and beliefs more closely aligned with mine." Some of those values and beliefs including being able to talk candidly about her anxiety and depression, two topics that her church didn't seem as comfortable with her sharing. The musicians she saw live, however, didn't mind talking about their own struggles with mental illness—ones that mirrored her own—and seemed more interested in getting to the root of the issue. "I think having issues with depression and anxiety [when I was] in high school, I don't want to say I wasn't feeling supported through my church, because I don't think that people were against it," Guilbault said. "It just wasn't an open topic at the time. And I feel like that's just changing in all sorts of communities. But, it was more discussed through music."

Valerie Gritsch, who has written multiple articles on religion and music fandom, says that she thinks being a fan of music can do, for some, what religion does for others. "Music can provide escapism," Gritsch said. "The fandom around music can offer a supportive community that the fan may not otherwise have access to, one that accepts them for who they are. Ordinary people and places can become sacred just by the meaning we invest in them."

When Gritsch wrote about fans of English folk singer-songwriter Frank Turner, she asked one of his devout followers, "What do you get out of these shows that you don't get elsewhere in life?" They responded, "I have thought about this extensively. And I don't like the answer… religion. These shows are pilgrimages of sorts. Don't get me wrong, I'm not calling Frank Turner a cult leader, but you find comfort and faith in words, you sing them together, you rejoice and suffer from people who are like-minded. It's just that this 'religion' isn't forced or demanding, or hateful. It's community and support without the bullshit."

That feeling of community and connectedness you get when listening to music, whether at church or at the front row of your favorite band's show, is an actually traceable activity taking place in your brain. Vinod Menon, Ph.D., associate professor of psychiatry and behavioral sciences and of neurosciences at Stanford University, published a study on this, writing: "In a concert setting, for example, different individuals listen to a piece of music with wandering attention, but at the transition point between movements, their attention is arrested." He continued, "I'm not sure if the baroque composers would have thought of it in this way, but certainly from a modern neuroscience perspective, our study shows that this is a moment when individual brains respond in a tightly synchronized manner."

Charlie Watts, artist, classically trained violinist, ceremonial musician, and Baptist preacher's granddaughter shared this with me about how music affects her mind: "It's going from beta waves to alpha waves in the brain. When you meditate, the vibrations of the brain actually change. So what I do, is just creating the sound that will put people in a more meditative space because it's hard to do that just like on your own." Watts wants to use music to bring people into the present moment, or, into that connected space that Professor Menon recorded in his study. "I'm learning more how to manipulate energy," Watts said. "It's kind of like a form of hypnosis, but I know hypnosis is kind of like a creepy word, so synchronicity."

Jimi Hendrix agreed with Watt's assertion on music as hypnosis. In the October 3, 1969 issue of Life Magazine, he was quoted as saying, "I can explain everything better through music. You hypnotize people to where they go right back to their natural state which is pure positive—like in childhood when you got natural highs. And when you get people at their weakest point, you can preach into the subconscious what we want to say. That's why the name 'electric church' flashes in and out."

Church, preaching, God, Jimi Hendrix... for me, there was only one person who could synthesize all these things together, one person who, at just 12 years old, saw Hendrix headline a music festival: former DJ, reformed rock concert-goer, almost-roadie for Chaka Khan, and current minister, my dad, Reverend Dr. Chauncey Campbell. He said, "Secular music, worldly music if you will, from concerts—what does that music do? Even in the Bible, it talks about how, when evil spirits were lurking about, the king would send for a musician, a cunning player, someone who could play skillfully. Music drives out anxiety, it drives out spirits, and the greatest thing about music is, when you go into the church, it leaves the secular and goes into the spiritual."

In my father's very opinionated opinion, gospel music gets you somewhere other types of music just can't. He told me, "One [type] of music drives you to the flesh, but true gospel music, it gives God reverence." I asked my dad about feeling that same spiritual connection at concerts, and how concert-goers felt transcendence. His response? "At the end of the day, it probably does take them somewhere. But where?"

I want to say that music, religion, spirituality, is all about—as Guilbault said to me—finding a system that works for you, or, as Johann Sebastian Bach once said, "Music is an agreeable harmony for the honor of God and the permissible delights of the soul." But, I'm not sure if that's all there is to it. What I've learned, or what I'm learning, is that music—life-changing, mind-stopping, praiseworthy music—has a power I won't ever completely understand, and whether you use it to distract yourself from the minutia of every day, to meditate, or to connect to God, it's something to be revered, to be appreciated, to be grateful for.