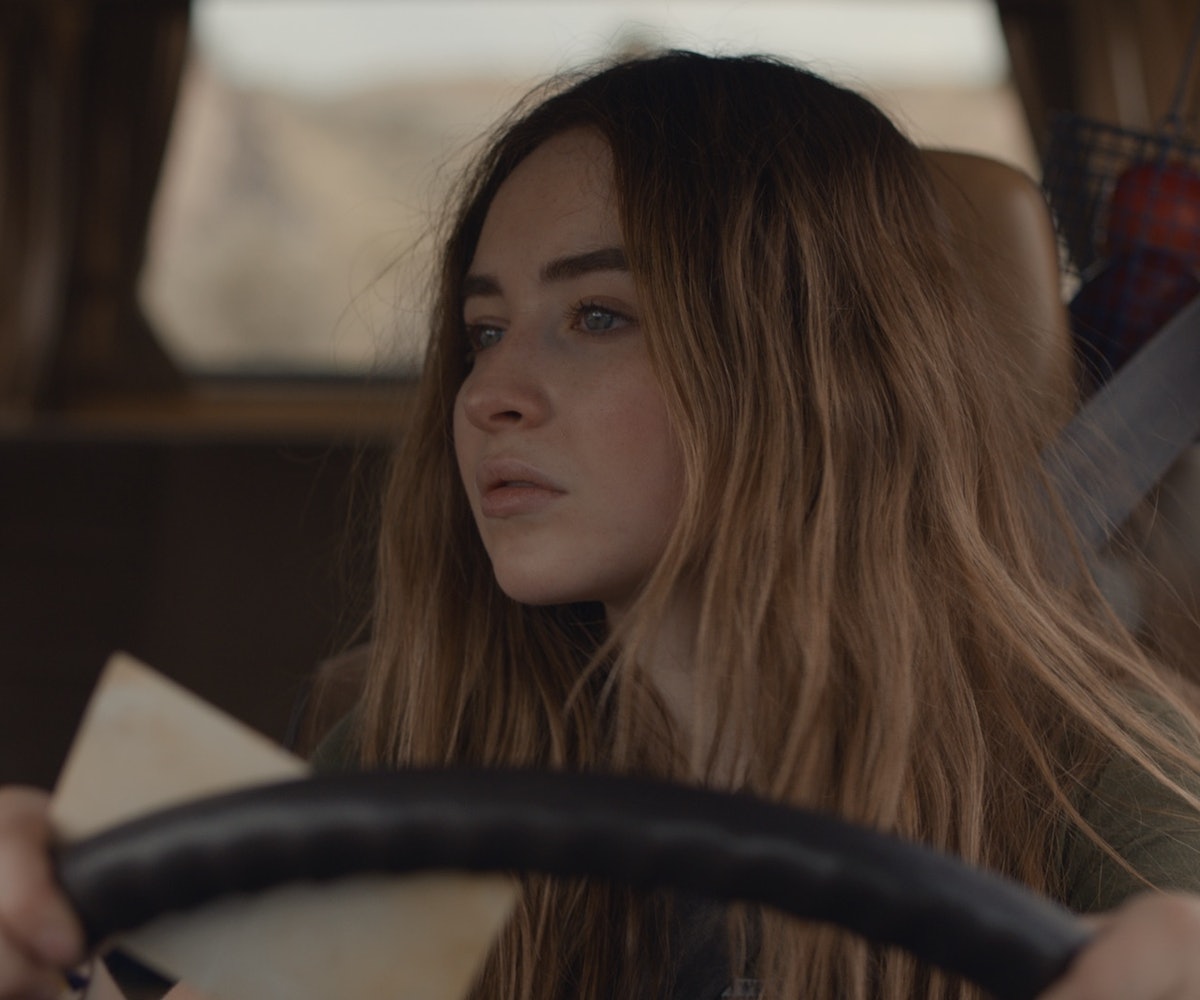 "I think this is one of the realest projects I've ever done," Sabrina Carpenter told me as we chatted prior to the premiere of her film The Short History of the Long Road at Tribeca Film Festival in New York City. "It was really refreshing to read a story about a young girl my age that wasn't over-sexualized," she admitted, which was part of what drew her to the role, and to telling this story.

In the film, Carpenter's character, Nola, is left to fend for herself following a traumatic event (no spoilers here), in possession of nothing but an old van and vague details of where she should go next. It's not much, but it's all she has—and, as it turns out, all she needs. This is because, as Carpenter described to me, Nola "is so smart, without being cocky or conceited... she's street smart, and does what she has to get done to survive."

To become Nola, Carpenter underwent a significant physical transformation; for the entirety of filming, Carpenter said, "I didn't wear any makeup, I didn't shave... I even dyed my hair for the film," going from her signature blonde to brunette. It helped her to look in the mirror and not see herself, she explained.

While that could be a disorienting experience, Carpenter explained that she felt completely at home on the film's set—thanks in no small part to the fact that The Short History of the Long Road has a woman writer-director and a crew with lots of women, which is still a rarity on many films. Aside from the logistics—Carpenter pointed out it was the first time where bathroom and shower scenes were filmed with an all-women closed set and crew—she noticed the little things that are easier, better "when you're talking to someone that gets that," as Carpenter put it. Writer-director "Ani [Simon-Kennedy] and I had a connection from day one, where we were able to be very honest with each other about what was right and wrong and what worked and what didn't work," Carpenter said. "When you're not working against egos or anything like that getting in the way, it's a beautiful process."

Simon-Kennedy made sure Carpenter was ready to step into her rawest form of self with plenty of homework: a list of Agnes Varda films and Kelly Reichardt's movie Wendy and Lucy, starring Michelle Williams, for starters. These movies got Carpenter into the proper headspace for a girl like Nola, who otherwise may have not seemed so much like Carpenter.

Nola's survival tactics and bare-bones values stuck with Carpenter—even as she returned to being a blonde—and reminded her of her own inner strength. Carpenter said she credits Nola with making clear how her "innate senses turn on during moments of panic and [seeing] something wrong... The way that you react to things; it showed me my initial automatic reflexes, and how strong and quick they are."

More than that, though, Carpenter explained that she shared a sense of inner strength with Nola, who she describes as "not a delicate flower." Carpenter continued, "She is strong as hell… the way she carries herself despite everything that's happening to her, and the way she decides to pick up and move on instead of giving up then and there."

Carpenter is also not afraid to explore different places in her creative work. Separate from her acting, she has returned to releasing music just this past week with her most vulnerable, brave release yet. "I think people have a lot of preconceived notions of who I am, what I am, what I should be, what I shouldn't be," Carpenter responded, as I asked her about her track "Exhale" ahead of its release. (Her album Singular Act II is slated for July 26 drop.) The lyrics begin,

Who put the baby in charge?

Just give me a chance

Listen to my sisters, everyone relax

Everybody answers shit I didn't ask

"I can't explain it any more than the first verse," Carpenter told me—her eyes began to well up, but her voice never wavered, not once. "I talk about my mom and my sisters and my dad, and it's everything that… when I perform on stage, I can't really always keep it together." She's been waiting to release this song, this story, until she felt her fans needed it—maybe until she needed it for herself. "If I can be honest with my fans, maybe they can be honest with themselves," she told me.

"Exhale" carries a powerful fragility; revealing the strength in emotional vulnerability, and pulling the curtain back on an otherwise glossy, loud-and-in-charge perceived persona. So, I asked Carpenter what she does in terms of self-care, to keep it all grounded. "My self-care is in progress right now," she admitted. "Anything can be self-care, but, for me, it's quiet… Not living life by a schedule is health, not that I do it often, but when I do, it's always a nice adventure."