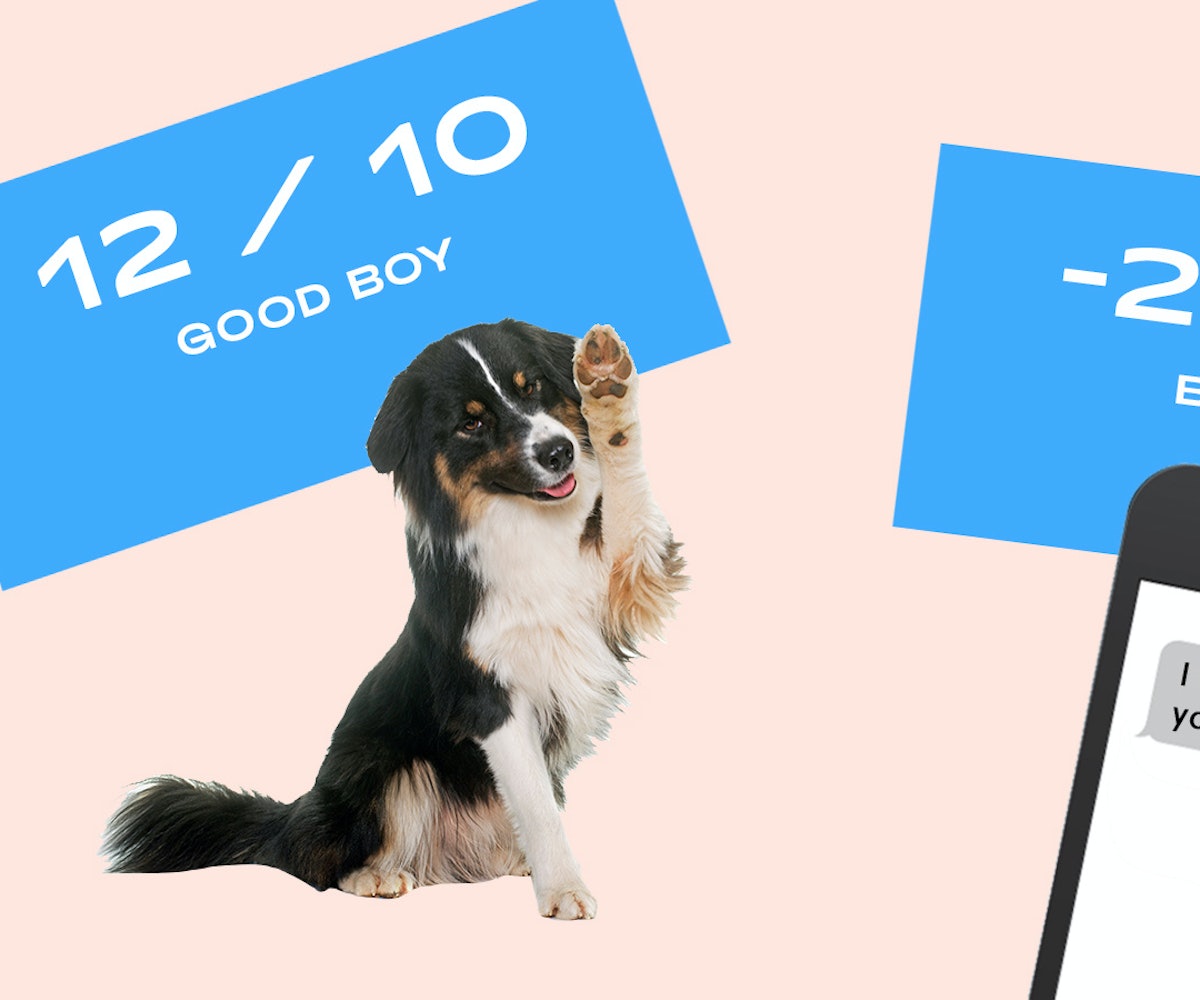 Do you love hearing about horrible first dates? Have you ever dramatically read aloud a particularly scummy interaction with a Tinder match? Perhaps in the same way we find ourselves unable to look away from the entertainment trainwreck that is The Bachelor, the joy we find in seeing that, yes, other people do suck just as much as your exes is undeniable and addictive.

But if your own life and those of your friends aren't providing you with enough bad date material, you can always turn to SheRatesDogs, a Twitter account with a name and concept that's a play on the account WeRateDogs, which gives glowing reviews of your favorite pups. SheRatesDogs uses a similar system to rate their unfortunate, often rude and demeaning, human counterparts.

We've seen screenshots demonstrating the male ego's fragility go singularly viral before. But Michaela Okland wanted to show the ubiquity of these experiences with toxic masculinity, and so she started SheRatesDogs to offer women a place to share in the common horrors of dating men and make it clear that this was a widespread problem, not just something that happened only on occasion.

Usually, when a horrible text exchange goes viral, Okland said to me recently, "You'll get 10 responses from guys saying, 'This would never happen, guys don't talk like this'... I wanted to make an account that was really specific, just showing how normal this is, how often it happens, how people aren't even trying to get attention by showing it. Why is this what dating is like?"

All of the submissions are of horrible texts sent by men—this part is intentional, as Okland doesn't want to contribute any negativity to women on the internet. But of her thousands of submissions received per day, most of them are calling out the bad actions of straight men. "I've done [a few posts] of Grindr submissions. There's not as many [sent], so there's not as many that are funny or different. I wouldn't be not posting any other experience [due to sexuality]," she clarified. "If I was getting [a lot of submissions] from [queer] men, they would be included as well."

But straight men haven't seemed to grasp why she doesn't include instances of toxic women. "That's been the funniest thing to me," she said when I asked how she handled mansplainers hopping into her DMs. "I've gotten messages saying, 'I think more people would enjoy this account if you show how women are crazy sometimes,' or… 'On Fridays, you should do crazy bitches,' and I'm like, 'No, I'm not going to do that.'" She added, "I think the reason this account is doing well is that it appeals to a specific group of people rather than loosely to every person."

"Being so used to this stereotype that girls are crazy," she mentioned, "then getting this overwhelming amount of content that shows the other side, it feels so good to finally be like, 'This is totally wrong.'"

Okland is no stranger to going viral on the internet. A media analysis and English linguistics major at Arizona State University, she spent plenty of time online before starting SheRatesDogs, having already garnered over 100,000 followers on Twitter. Because of this, she was able to give the new project exposure right away, and it's already surpassed her personal account, at 148,000 avid readers.

Okland tries to keep a balance throughout the SheRatesDog Twitter timeline, including a variety of exchanges that go from bad, but funny, to seriously awful. However, Okland made clear that before putting anything online, "I always check in with the girls like, 'Are you okay? What happened?' I don't want to be posting actually threatening [messages]. I'm working on adding to my website a list of resources that I can refer people to for [instances of abuse]."

So, with a constant stream of bad dating examples, does Okland have any particular advice for hopeful singles? "If it's really early on and there are red flags, don't ignore them. Don't compromise on anything that's going to always bother you," she said. For her part, she'd never date a guy who got upset over her moderating SheRatesDogs. That's enough of a red flag. "Also," she added, "Listen to your friends. I've had so many times when I've been dating someone, and my friends are like, 'He's not good enough for you.' And I didn't get it until after, and [then I realize,] Yep, they're always right."

NEXT UP
Life
The Spiritual Meaning Of May 2022’s Full Flower Moon Lunar Eclipse In Scorpio
Life
Venus In Aries 2022, Explained
Life
May 2022’s Mercury Retrograde Is A Cosmic Review Of Your Personal Life
Life
Jupiter In Aries 2022 Is Your Summer Awakening