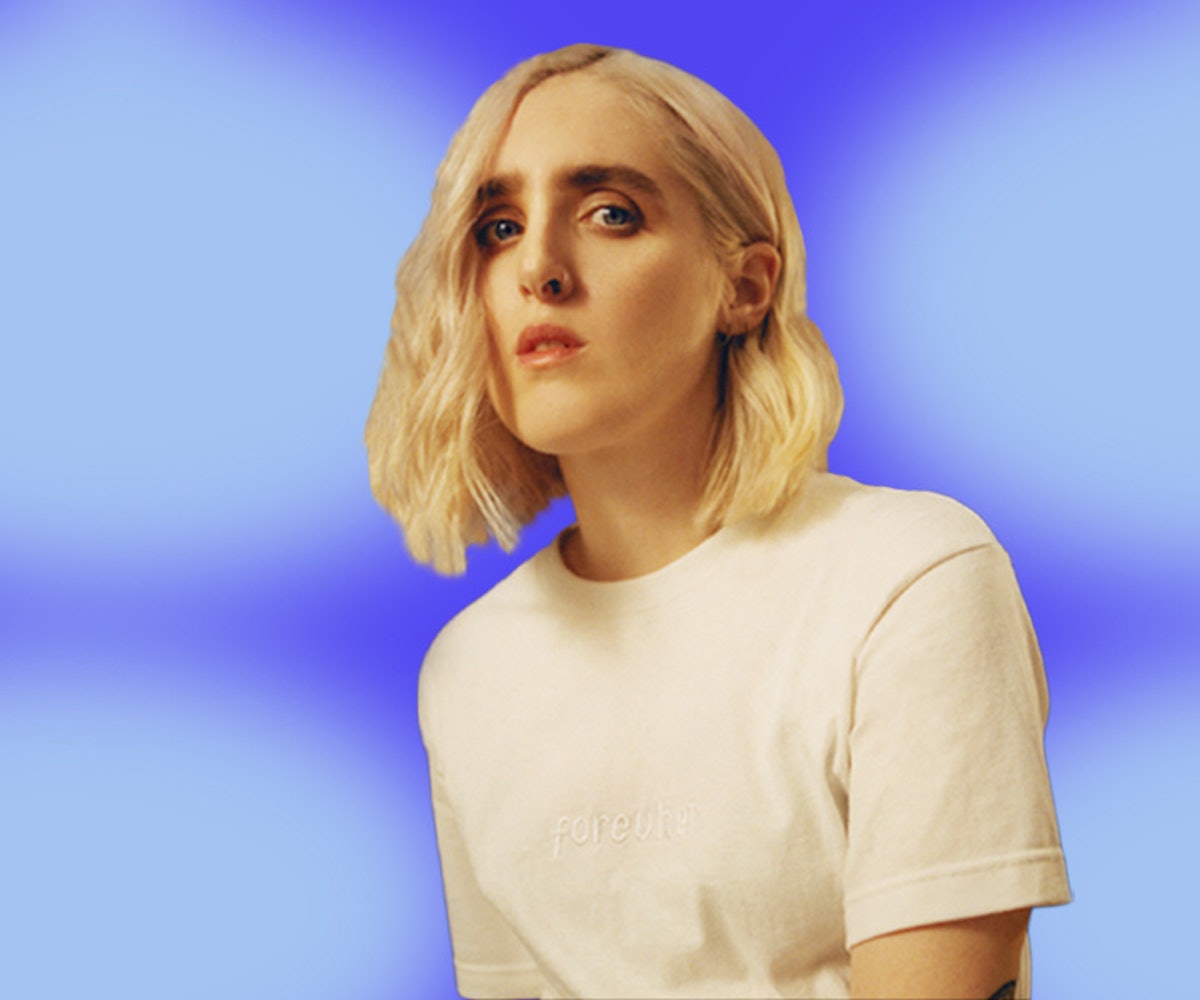 Throughout your life, the importance of your gay identity varies. Sometimes, it feels like the biggest deal ever, like you need to scream it from the rooftops so that everyone knows just what you're about; and other times, it's no big deal, and doesn't even feel like a defining characteristic. For pop musician, Shura, she even forgets sometimes that she's a lesbian; after all, she has other things on her mind, like a new album coming out.

That's not to say that her sophomore endeavor, Forevher, which drops today, is devoid of talk about queerness and sexuality—it's actually full of that, if you're looking for it (and I always am). The follow-up to 2016's Nothing's Real, the new album, Shura tells me over drinks, is "probably the first time I've used pronouns and been explicitly queer [lyrically]." But, the gayness is written in a way that so nonchalant that you actually might miss it altogether. "Part of the way I wanted to approach this record was just to write about my gayness in the way that straight people write about their straightness," shs says. "I wanted to create an explicitly queer album that, if you blinked, you could absolutely miss that it was queer."

And besides, that's not even the main theme of the album. More important than all the gayness, is the idea of love and foreverness, resulting in tracks that are simultaneously deeply personal and overwhelmingly relatable. Shura plays with the idea that we are taught that love lasts forever, even though, it always falls apart, until, you know, it doesn't. But, Shura jokes, despite romance's inherent difficulties, "I do believe in love, which I shouldn't because I've been dumped 20 million times." What a mood.

Believing in love for herself was actually a process, Shura tells me. Her 2016 debut Nothing's Real was a story of losing someone she thought she'd always have, and how incredibly awkward it is to be interested in someone who doesn't feel the same way about you. Forevher is the opposite vibe, not only because Shura's now in a relationship with a girl that she loves, but also because she's worked to be in a more confident place for herself. With a therapist, Shura tells me, she questioned "whether I was holding onto this idea of myself being an anxious person partly because I had written that story through my record—that I was the awkward one, I was the anxious one, I was the shy one."

"I do believe in love, which I shouldn't because I've been dumped 20 million times."

Even if you didn't write an entire body of work about how undateable you are, like Shura did, projecting your own anxieties onto every interaction you have with other people is something so many of us do. Forevher paints a particularly moving portrait of someone who has anxiety—someone who worries about what their partner is up to if they haven't texted back in a while—actually figuring out how to have confidence. "Just because you're anxious doesn't mean that you can't be brave, that you can't be bold, that you can't also get the girl, that you can't also enjoy sex, and do all these things," says Shura.

The confidence in her music has come a long way since her viral debut track, "Touch," which is the musical interpretation of a lesbian gaze not met. Now, "Side Effects" shares what it's like to have the kind of confidence that means you no longer worry about the state of your relationship when your partner leaves your sight—"I don't feel no side effects when you're gone." And, "Religion (U Can Lay Your Hands On Me)" is the direct antidote to the insecurity of "Touch," with Shura knowing that a girl is into her and having the power to tell her that she can touch her, instead of the other way around.

The universality, and the proof for that unabashed belief in love, is heard in "Tommy," a track about a man whose wife died, and so he moved on to someone else. The notion of "forever" is toyed with here, too, because this man loved his wife for her forever, even if it wound up not being his. "You may move on and find new love, but you loved them for the entirety of their existence," Shura says about the track.

Queer people are conditioned to feel afraid of their own love and the repercussions they may face if people find out which gender(s) they're interested in. By shrugging that off completely, and not even bothering to interact with it, Shura is showing the mundanity of being queer, which is a story that is just as important as the uniquely queer stories that some others are telling. It's essential to have art by and about gay people celebrating their queerness—from Hayley Kiyoko's "Girls Like Girls" to King Princess' "Pussy Is God"—but it's just as necessary to show people who approach the topic of sexuality with a nonchalance that makes being gay feel like absolutely no big deal. Because, honestly, it isn't for some people, and doesn't have to be for others.

Here, the queerness of the narrative is written in a way to make it universal. In many ways, queer love is the same as all other love. The title meshes the words "forever" and "her," and Shura uses she/her pronouns to describe love interests, but the feelings and experiences she's writing about are such that anyone with a heart would understand and fully identify with the tracks. In the end, the story told in Forevher is one that everyone knows. "It's just a love story," Shura says. "It's the oldest story in the book, along with the Bible, but it's just very fucking gay."