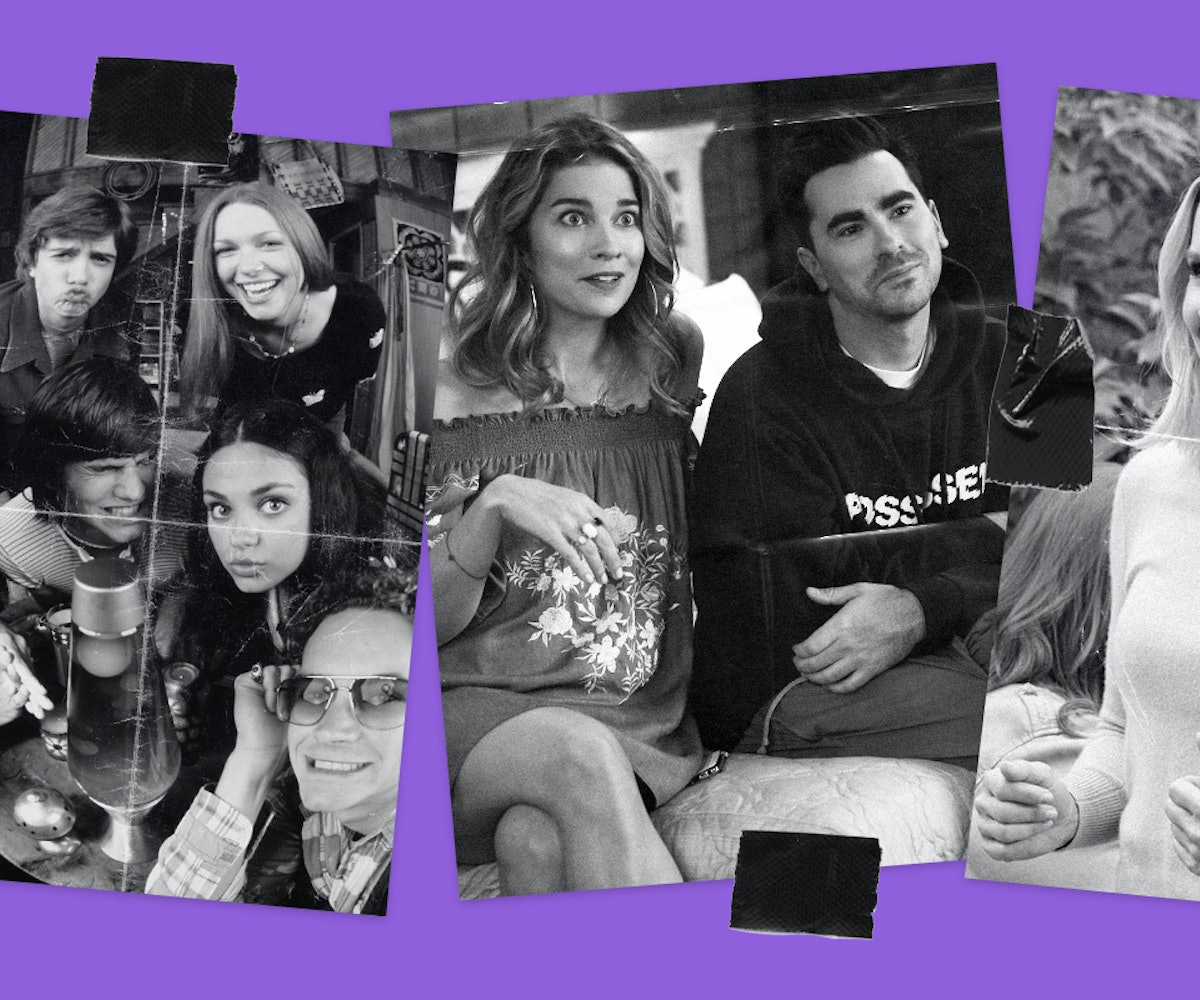 After spending hours being inundated with push notifications about how dire our current pandemic is, sometimes all I want to do is pack a bowl and dive down a deep hole of sitcom-induced mindless pleasure. Sure, we all love moody dramas that immerse us in their serious worlds as they talk about their characters' serious problems. But when the real world outside is as bleak as it currently is, it's completely understandable if you want to lose yourself in something slightly more uplifting instead. After all, who wants to turn on the television and watch something that makes them even more stressed? Let's live a little!

Since we know everyone is spending more time at home in front of their televisions than usual, NYLON has compiled a list of ten essential sitcoms you can find on streaming services right now. Whether you're in the mood for a cool throwback (That 70s Show or A Different World), a joke-filled satire (30 Rock), a touching family story (One Day at a Time or Schitt's Creek), or something so unapologetically crass you'll forget how inept our current government is (Veep), we've got the right show for you. So sit back, pack your own bowl, and prepare to laugh.

Sure, The Office may have Steve Carell and Parks and Recreation may be more goodhearted, but no early-aughts network sitcom can make me laugh harder than 30 Rock. Created by Tina Fey and inspired by her stint on Saturday Night Live, 30 Rock takes a satirical look behind-the-scenes of a late night sketch show cheekily called "TGS with Tracy Jordan." (Yes, Tracy Jordan is played by Tracy Morgan.) A surreal parody of life at a big network, the series followed Liz Lemon (Fey) as she struggled to maintain respect as the head writer and showrunner for TGS. Though this was undeniably a joke-first comedy, 30 Rock was unsparing in its takedown of corporate workplace politics and found space to address everything from racial prejudice to the pressures facing high-powered women in male-dominated spaces. Best of all, the show is just as enjoyable on your fifth watch as it is on your first. Take my word.

If you are a fan of fashion, mischief, and undiagnosed alcoholism, look no further than the classic British series Absolutely Fabulous. Based on the 1990 comedy sketch "Modern Mother and Daughter," Absolutely Fabulous follows lifelong best friends Edina and Patsy (a PR agent and magazine editor, respectively) as they traipse around London getting into all sorts of trouble while avoiding their actual jobs at all costs. Balancing this pair out is the well-mannered Saffron, Edina's studious teenage daughter — though you might not ever know it based on how often she is forced to clean up all her mother's messes (both literal and figurative). Uproariously funny and bawdily inappropriate, AbFab is essential viewing for comedy fans of all stripes. (Just don't talk about the 2016 film version. We don't mention her in this house.)

As satisfying as it is to watch serial predators get their comeuppance, it can still be quite difficult to truly divorce yourself from the works you grew up with — such as The Cosby Show, which I haven't been able to revisit in years. Luckily, I can still enjoy its spinoff, A Different World, without feeling too much guilt. Following second-oldest child Denise Huxtable as she leaves her family home to attend the historically Black Hillman College, A Different World tells a nuanced story about life on campus. Harmless and decidedly PG, in many ways, the Emmy-nominated show shares a lot with its predecessor — but as it trains its focus on a group of young adults simply struggling to find their way in a new place, A Different World goes beyond that to hone in on the myriad ways college students must learn how to navigate the world on their own.

The Good Place, Seasons 1-3 on Netflix

If you're desperate for a new sitcom that won't gradually decrease in quality as the seasons go by, let me assure you: The Good Place does a remarkable job of sticking the landing. Created by Parks and Recreation's Michael Schur, The Good Place is the rare sitcom to address serious issues (like life and death, the afterlife, morality) in ways that are still consistently hilarious. Following Eleanor Shellstrop and a group of other recently-deceased people as they try to (unsuccessfully) navigate the afterlife, The Good Place takes many twists and turns across its 53 episodes — seriously, the first season finale has one of the best twists in television history — before coming to a conclusion that is as sincerely heartfelt as anything you'd hope for from a Schur show. Furthermore, you'll be hard-pressed to find a cast more uniformly strong than this: Kristen Bell, Ted Danson, William Jackson Harper, Manny Jacinto, D'Arcy Carden, and Jameela Jamil are all perfectly cast as the central sextet charged with saving humankind as we know it.

Grace and Frankie, Seasons 1-6 on Netflix

In the pilot episode of Grace and Frankie, the titular octogenarians (played by 9 to 5 co-stars Jane Fonda and Lily Tomlin) both find their worlds flipped upside-down after being informed that, after years of sleeping with each other in secret, their respective husbands would be leaving them to marry each other instead. It's a zany premise that easily lends itself to laughs — Surprise gay love! Two older women forced to commiserate and bond together! — but what's most special about Grace and Frankie is the genuine respect it has for all its characters. Though Grace and Frankie are the clear protagonists of this long-running sitcom, equal attention is paid to their children, their new love interests, and the love shared between their ex-husbands.

One Day at a Time, Seasons 1-3 on Netflix

Just a month after premiering its critically-acclaimed third season, Netflix canceled One Day at a Time, a decision that quickly drewtheire of the internet — not just because every show has its dedicated fans but because, in a few ways, One Day at a Time was unlike anything else on television. While the series is obviously based on a 1970s Norman Lear sitcom of the same name, Netflix's reboot made the era-appropriate decision to make its central family Latino, allowing the sitcom to delve deep into race-specific issues its predecessor could never. And that's not all. Since its debut, ODAAT has also dealt with matters of mental health, queer identity, familial strife, and immigration. It's touching without being overly sentimental, informative without feeling didactic. Imagining a TV landscape without it was a scary thought, so thankfully, Pop TV stepped in to save it — and based on the manypositivereviews it's already netted, it's safe to say that Netflix's loss is Pop TV's gain. Bet they'll think twice next time!

When Schitt's Creek premiered back in 2015, it would've been hard to imagine that it would one day evolve into the widely talked-about, Emmy-nominated TV series it has turned into today. Following the formerly wealthy Rose family as they are forced to move to the small podunk town of the show's title after losing all their money, the series, created by the brilliant Dan Levy, is witty and charming, characterized by an impenetrably optimistic spirit. All four members of the Rose family are hysterical — whether you're more amused by Johnny's straitlaced business-mindedness, David's deadpan primness, or Alexis' airheaded pursuit of all things exotic and fabulous will vary. Personally, I get the biggest kick out of Moira Rose — as played by the fantastic Catherine O'Hara, Moira is a constant source of self-involved histrionics, whether she is pronouncing "baby" as "bébé" or carefully arranging wigs on her Wig Wall.

Superstore has always been good, but in recent seasons, Superstore has proven itself to be something closer to great. Taking its name from the giant Walmart-like department shop where its central characters work ("It's what makes America American," as quoted in the first season trailer), this NBC sitcom follows a group of employees at "Cloud 9" as they try to manage the day-to-day problems that come with working retail. Taking full advantage of its diverse cast (one of the best on network TV), Superstore is an endlessly rewarding riot. And while this series isn't the only sitcom to get better with time, it is one of the few to feel more important with time. Take the season four trajectory of Mateo (Crazy Rich Asians' Nico Santos), which finds him revealing his undocumented immigrant status to his coworkers and eventually being arrested by ICE. Poignant and powerful without sacrificing its sense of humor, Superstore is super special.

In 2020, there's a good chance you're familiar with the names Mila Kunis (Black Swan), Ashton Kutcher (Punk'd), Wilmer Valderrama (NCIS), and Laura Prepon (Orange Is the New Black). But in 1998, when That 70s Show premiered on FOX, all of these now-revered actors were virtual unknowns. Today, each one of them cites That 70s Show as the official Hollywood breakout that launched their careers, so it shouldn't be too surprising to learn that the show, based on a group of Wisconsin teens living in the late 1970s, is brilliant — effectively utilizing its period setting to tell a timeless story about adolescent ennui. In fact, the most enduring aspect of this classic sitcom is its ability to show that not much has changed even as everything has changed. Even in 2020, this '90s depiction of '70s life has a great deal to say about what it means to grow up in a world that's constantly evolving. If you're looking for the ultimate stoned binge, look no further.

Without a doubt, Veep is the cruelest sitcom on this list — by which I mean, this show is scathing. Following the trials and tribulations of Selina Meyer (multi-Emmy winner Julia Louis-Dreyfus), a vice president with dreams of one day crossing out the "vice" in her title, Veep is, first and foremost, a comedy about incompetent people occupying extremely important positions. As a series about inept individuals yanking our nation's strings for the lols, Veep was always funny, but in the wake of Trump's election, it quickly took on new importance — what began as a delicious farce slowly morphed into something much more prescient as the actions taken by our real government started surpassing Selina and Co.'s in terms of sheer ridiculousness. Like most shows on this list, Veep, with its quick-paced Armando Iannucci dialogue, needed a strong central cast to succeed — and luckily, Louis-Dreyfus is surrounded by actors who are more than up to the task (especially Tony Hale, Anna Chlumsky, and Reid Scott). After all, not just anyone can drop an endless stream of F-bombs with thislevelofprecision.