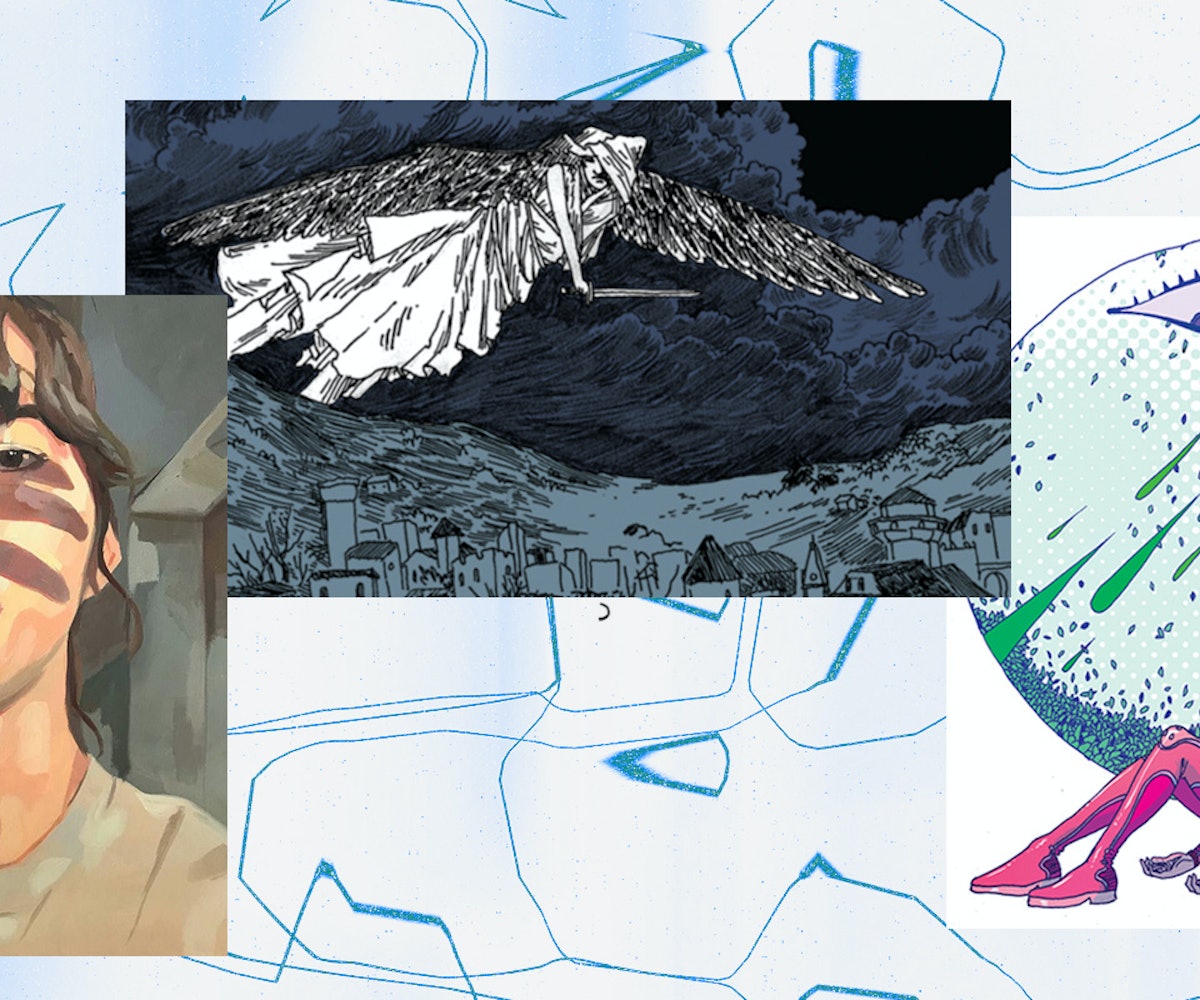 "Art is the inside of the world," says the WHY CHEAP ART? manifesto, published in 1984 by Vermont's famous Bread & Puppet Theater. It's one of 17 statements on the purpose and nature of art made in the since much-circulated broadsheet. On its own it may seem somewhat cryptic, an outsider's enthusiastically mystical rallying cry, but like the rest of WHY CHEAP ART? it gets at something solid and essential. Art, as the lens through which we learn empathy, is essential to instilling in us a consciousness of the interior lives of others. It's one of the most elemental ways in which we can experience someone else's reality.

A few years ago, not long after I read Bread & Puppet's manifesto for the first time, I made a choice to put my disposable income toward art made by individual creators without corporate affiliations. The comics of Julia Gfrörer, Carta Monir, Celine Loup, Katie Skelly, and other women joined my copies of Mike Mignola's Hellboy and Allison Bechdel's Are You My Mother? on my shelves. I started listening to trans-fronted bands Them Are Us Too and Black Dresses, reading the fiction of self-identified "trashgender" writer Charity Porpentine Heartscape, watching independent films like Yann Gonzalez's Knife+Heart and Alli Coates' American Reflexxx. I immersed myself in smaller art—not just on economic principle, but to see the inside of the world as other lesbians, other poor people, other women, other transgender people see it.

The conversation about representation in mainstream media has been a fixture of cultural discourse for decades. From the Bechdel Test and its many offshoots to the glut of reporting and data-gathering on underrepresentation of women, gay and transgender people, the disabled, fat people, and people of color in film, comics, prose, and television, social media is awash in debate over how much inclusivity is too much, or whether this or that counts as representation. The common thread to all such debate is that it centers on mass media, on wide-release films and ultra-popular music. Sometimes it seems like more ink has been spilled on the "brilliant queerness" of Carly Rae Jepsen's glossy pop hits than on the work of actual lesbian singers and musicians.

Representation on the public stage is unquestionably important, especially for children whose sense of self is so vulnerable to being swept up in normative visions of the dominant culture. When only one image of life is popularly available, it can become difficult to see lives like your own as full and complicated things. You start to hunt for traces of yourself in that dominant culture, to treat every crumb that might possibly allow you a spoiled and fleeting taste of the master's table like a feast to be jealously guarded. Gal Gadot's thigh-jiggling in a single shot of Patty Jenkins' Wonder Woman becomes a body-positive rallying cry. A single glance between two women in Taika Waititi's Thor: Ragnarok becomes fodder for who knows how many articles about the movie's "subtle homo-eroticism."

Mass media is, of course, produced by the rich and the privileged. It bears the stamp of their worldview (the odiously sentimental material about the family having to pull together to support the dad's tech start-up in Pixar's Inside Out comes to mind) and the clean, unadventurously crowd-pleasing aesthetics which are the typical result of the focus grouping process. To some people, the slickness of that production—the glossy cover of an official behind-the-scenes art book, the breathtakingly realistic but eerily lifeless CGI of Disney's recent spate of live-action remakes—has become synonymous with art itself as an idea. Even as they earnestly discuss the necessity of representation and the pain of its absence, they learn not to seek out or accept it unless it's handed to them from on high by one of perhaps four recognizable branded corporate entities.

The sad irony is that the representation so many are so hungry for already exists. Outside the tiny, blinding spotlight of corporate media, there is an entire world of small, independent media made by marginalized creators and outsider artists of all kinds and reflecting their unique and idiosyncratic worldviews. I've seldom felt more at home than I did reading about the economically desperate and mentally tumultuous lives of trans lovers Vellus and Isidol in Heartscape's Psycho Nymph Exile, a science fiction book written not to prognosticate about the future of transgender life but to make sense of the stressful precarity and almost untouchably delicate joys of its present through phantasmagorical imagery. The two women do degrading sex work, lose their unemployment, endure waves of crushing depression and groundswells of staticky, crackling mania. They beg and steal and eat from the garbage. They both hate and love themselves. Their relationship is convulsed by circumstance and by the sharp, brittle edges of their own traumatized personalities. "I wish there was a world for us," the book concludes as the two women lie together, Vellus having just woken from a nightmare about Isidol's death. It's a heartbreaking sentiment, one I feel like a burning needle in my heart whenever I lie in another trans woman's arms: I wish there was a world for us.

That world those of us who live on the margins long for will never come from a boardroom. Even if the world's suits wanted to make it, they don't know what it looks like, what it tastes like, what smells rise from it on a hot summer day. The artists who come from our communities, who live and work inside lives like ours, are the representation we want and need. Their work comes from and revolves around people like us. The self-loathing women of Julia Gfrörer's comics digging furrows in their arms with safety pins. The untreated and unstable transgender heroines of Charity Heartscape's books, games, and interactive fiction. Gina Wynbrandt and Laura Lannes' guttingly brutal autobiographical comics about trying to navigate romance while wrestling with an utter lack of self-esteem of which they're painfully aware.

The art of small creators has never been more accessible. Follow artists and critics and writers you love on Twitter. Go to local zine fests and pick up whatever catches your eye. Rifle through any of a hundred online marketplaces like Etsy and Gumroad looking for handmade books and comics. Art is the inside of the world, and the entryways to that interior are inside our bodies and our minds and the thoughts and dreams of our loved ones. We can give each other a depth of understanding no major studio release could ever hope to rival, and if our books are cheaply bound, our films choppily edited, our comics smudged by the occasional bad risograph transfer, then at least they are ours. If we learn to cherish the imperfection of small art, to immerse ourselves in the experiences and worlds of people like us, to embrace the mess and failure and frustration of our lives as social outcasts, we can reclaim our personhood and reject corporate culture's crass attempts to placate us with crumbs. We can make a world for us.