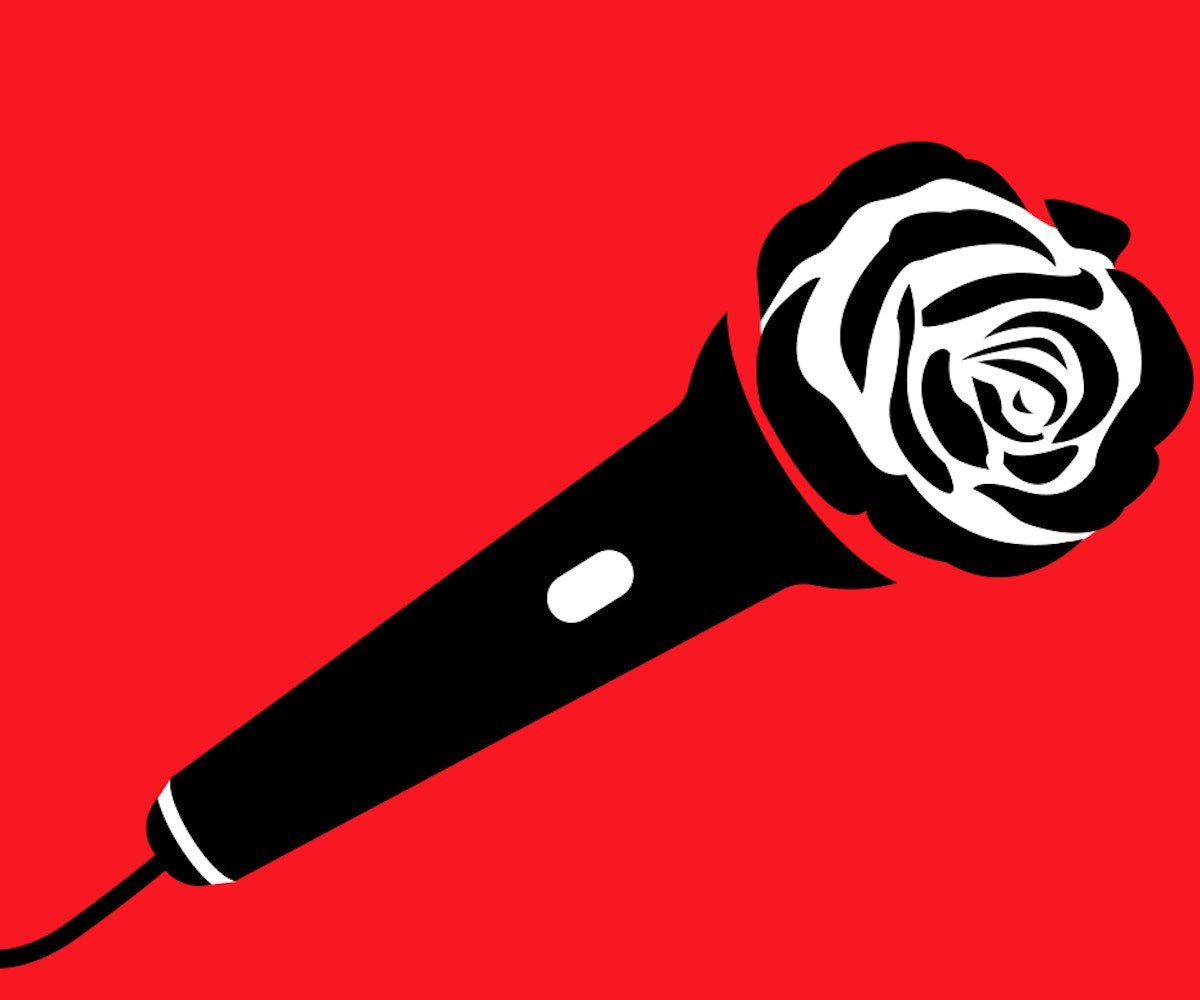 Socialism is enjoying a golden moment in America right now. Look no further than the burgeoning membership of the Democratic Socialists of America (DSA)—which has gone from 6,000 dues-paying members to 56,000 in a little more than two years—for confirmation that socialist policies have made a resurgence in mainstream politics.

Of course, it wasn't that long ago that the word "socialism" was still associated with Red Scare radicalism and vilified as being quintessentially anti-American. The fact that it is now an accepted political identity for members serving in Congress and that one of the Democratic frontrunners for the 2020 presidential election is a DSA-endorsed candidate in support of Medicare-for-all—a policy proposal once shot down for its impractical idealism but that is now beginning to be seriously considered by a number of mainstream politicians—means that there's been a major ground-shift in this country. But, what's it going to take to get more Americans on board? And, who's to credit for making socialism, well, sexy again?

That last question, at least, can be answered with relative ease. According to Allie Cohn, a member of the DSA's elected 16-member National Political Committee (NPC), the organization's membership attributes spikes in its numbers to two individuals who just so happen to be political (and otherwise) polar opposites: Donald Trump and Alexandria Ocasio-Cortez.

"We definitely experienced a boost in membership when Trump was elected," said Cohn, over a phone call, affirming the opinions of those who believe the political left's shift further toward its fringes is a direct reaction to the era of President Trump. But Trump isn't the only person the DSA can credit for its recent success, as there was also a surge in membership when the DSA-endorsed New York Congresswoman Alexandria Ocasio-Cortez was elected to the House of Representatives last November. "What I'm noticing now is that the conversations we're having are much broader than Trump and how we need to get him out," Cohn continued. "We're talking about the oppressive systems and economic inequality, and what oppression looks like and feels like regardless of your party."

In New York City, there are over 3,500 DSA members who are a part of various working groups, ranging from Labor and Strike Solidarity to Racial Justice, to Ecosocialist groups. There are also smaller branches within the NYC DSA, which serve different geographic regions throughout the boroughs. As a New Yorker (and serial Facebook Events RSVPer), it's not rare for me to see numerous DSA events listed on social media over the course of a single week. These include—but are not limited to—run-of-the-mill general interest branch meetings, an ongoing Audre Lorde socialist feminist reading group geared toward womxn of color, and rallies to curb development in vulnerable New York neighborhoods.

"What I'm noticing now is that the conversations we're having are much broader than Trump and how we need to get him out... We're talking about the oppressive systems and economic inequality, and what oppression looks like and feels like regardless of your party."

Still, even with all of these offerings, the DSA continues to battle the perception of an inclusivity problem, which can feel disheartening, as many of the policies the organization hopes to advance seek to disproportionately benefit women, low-income individuals, and people of color. Recent examples of these policies in action include when the NYC DSA formed coalitions with a number of city organizations that fought to keep Amazon from building its HQ2 in Long Island City, a neighborhood that's already seen skyrocketing real estate values in recent years without the presence of the tech giant. The effort was successful, to the relief of many New Yorkers, including Ocasio-Cortez.

Despite this, the stereotype of the white, bespectacled, bearded, Bernie bro, who can be seen shouting Marxist theory over a crowd of other nearly identical looking dudes, can't all be reduced to hyperbole—it bears some resemblance to reality. In a recent article that appeared in New York Magazine, Sean McElwee seemed to affirm this when he commented on his lack of interest in attracting white blue-collar voters by saying, "It's weird to me that DSA is a coalition of college-educated white people who, like, hate the idea that the Democratic Party should appeal to college-educated white people." However, McElwee wasn't saying that the DSA should—or does—ignore anyone who isn't white and college-educated, rather that there is something suspicious about the idea that Democrats can only win by attracting Trump voters of the Hillbilly Elegy ilk. That doesn't mean, though, that the DSA doesn't need to ensure that its coalition is broadened for further inclusivity.

Cohn, who is a member of her local Knoxville DSA chapter, attests that the white, college-educated, socialist trope is not by any means limited to Brooklyn. "I would say the majority of our chapter's current members aren't students, but it's definitely a pretty white group—originally professors and more academic types with a great deal of political education talking about theory. Our current chair and vice chair of our chapter, however, are both women, and as a white woman, it's kind of on me to reach out to our allies and friends and get them to come to our meetings to see it isn't just a bunch of white guys hanging out," she said.

Cohn herself is a mother, a former teacher of 14 years, and is now also a grad student getting a Masters in Social Work in Knoxville—not the typical profile trend pieces would have you expect of a dedicated DSA member. Though the membership of the Knoxville DSA chapter is small at 200 members, it's also experienced a great deal of growth from the mere 30 members recorded two years ago. Cohn got involved after serving as a delegate for Bernie Sanders in 2016, though she lived in Florida at the time. When she moved to Knoxville shortly after, she met a current chair at her local chapter, who invited her to a meeting. Though she had been a paying member of a teachers' union in Michigan where she had once worked, she'd never attended a union meeting and didn't really understand the intricacies of labor to the extent that she does now. "I've become most excited about understanding the worker," she said. "Right now, I've also been very excited to see that teachers are being seen as the new blue-collar worker. We're seeing teachers' strikes in places like West Virginia, and they're doing it really well—even in places where you're not allowed to collectively bargain."

Another look at DSA branches across the country makes clear that there are DSAers beyond white, college-educated, bicoastal types who are interested in making waves beyond their local chapters. In a recent article for The Atlantic, we get a glimpse into the lives of a number of Iowan socialists who are hoping to shift the political conversation leftward one year ahead of the state's famed caucuses. The individuals interviewed for the piece maintain that they're hardly members of the elite club that some claim today's socialists to be a part of. To them, the socialist movement is for everyone affected by the systemic ills of capitalism and they want to stress: That's most of us.

"I've become most excited about understanding the worker... We're seeing teachers' strikes in places like West Virginia, and they're doing it really well—even in places where you're not allowed to collectively bargain."

But there are still plenty of Americans who are unwilling to jump on the socialist bandwagon—in name, that is. When asked about whether she was a socialist, 2020 Democratic candidate Elizabeth Warren had a quick, and rather dramatic, answer. "I am a capitalist to my bones," she said.

Though Warren might reject the socialist label for the sake of voter marketability, the truth is far more complicated than her pledge to capitalism. And she's not alone: Far more Americans embrace tenets of socialism than identify as socialist. Warren, for one, has focused her campaign on corporate regulation and accountability, calling for an "Accountable Capitalism Act" that would give workers more power on boards, shifting concentrated power away from corporate stakeholders and toward those responsible for the production of goods. In Warren's ideal version of America, large private corporations would still exist—flourish, even—but not without checks that would, in turn, benefit the laborers.

Our current model of power and wealth distribution are disseminated in Marxist theories of labor, making clear that so long as the labor contract is "free," the amount that workers are compensated is not based on the value of the goods they produce, but rather by the bare minimum said worker needs to survive. As a result, the capitalist boss figure profits far more than what is necessary, while the worker remains entrenched in low wages and unjust labor conditions. Warren wants to change this by allowing employees to have more of a voice over how businesses are run—over the means of production, if you will. This is a socialist idea, through and through. Do they completely upend American economic and social life for all of us? Do they turn us into North Korea or Venezuela? Almost definitely not, but that doesn't make them less socialist. (And, for what it's worth, those countries don't epitomize cohesive socialist policies either!) It's important to label socialist policies as such, though, so that we become less afraid to talk about them for what they are.

But considering that most Americans are still afraid of just the word "socialism," why is it that Bernie and the DSA are still willing to brand themselves as Democratic Socialists rather than social democrats—which is what they're, in reality, closer to being? In social democracies—like the oft-mentioned Scandinavian ones—private ownership is still alive and well, people do tend to pay higher taxes to support a more robust network of social services, but according to the World Economic Forum in Davos, which ranks 140 countries according to the total burden of government regulation, the U.S. ranked 51st place in 2016, below Sweden, but just above Denmark. Could it be that in some aspects, the famed socialist haven Denmark is more capitalist than America? Not exactly. In reality, there's no country on this planet that's fully socialist or fully capitalist, and for a long time—as much as some Americans might hate to admit it—we've taken policy ideas from both capitalist and socialist camps from around the world.

According to an article published in DSA-friendly Jacobin Magazine, democratic socialism seeks to go further than social democracy in establishing public ownership over productive assets within our society. Most workers in social democracies still depend on private capitalist firms for their survival, for democratic socialists, that's not enough. "Make no mistake: a Nordic-style welfare state would be vastly preferable to our neoliberal alternative, and we should work toward the construction of some of its most important institutions here in the U.S.," the article reads. "But by calling ourselves democratic socialists, we signal our aspiration for a deeper democratization of society than social democracy will allow."

Call that hopelessly idealistic, call it "un-American," or divisive, or impractical. Like capitalism and socialism in its purest forms, democratic socialism is an ideology—it doesn't exist in any place in its fully concentrated unadulterated form. But the DSA, regardless of Bernie or Trump or AOC, is shifting the conversation of the American political mainstream, pressuring politicians in the center to meditate on issues like free college tuition, universal health care, and reparations for Black Americans. "You constantly need to have that pushing on those in the middle," said Cohn, reflecting on how the political discourse of the Democratic Party has shifted toward issues brought up by DSA candidates. "You constantly need to have that pushing, or things are going to stagnate. The more we push and the more we talk, we start to see a shift in the political landscape."