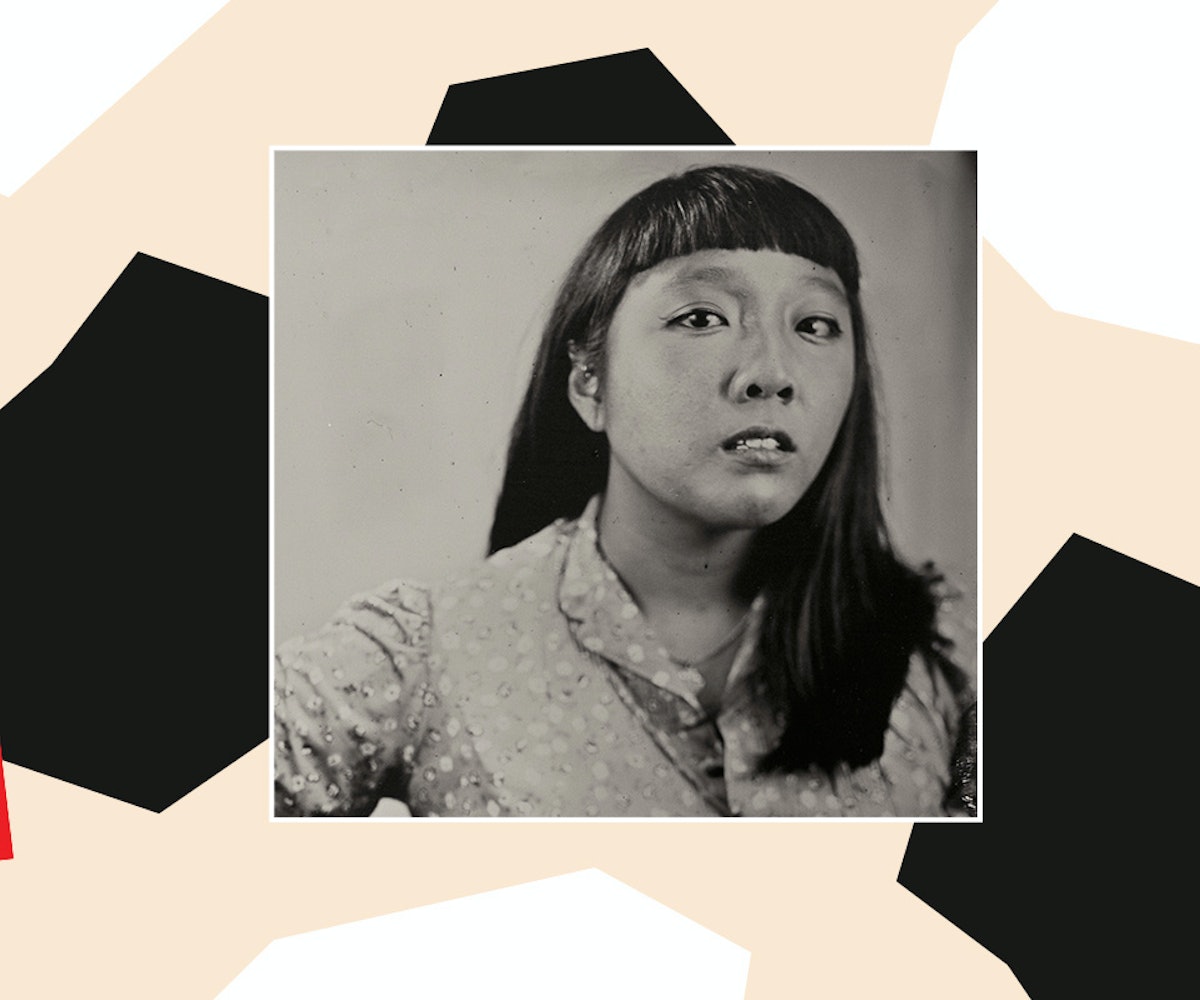 The following is an excerpt from Trisha Low's book, Socialist Realism, out today from Coffee House Pressvia its series with Emily Books.

This is not a protest poem, but I live in California now, so. It's May Day. I'm at the march, but something's wrong. It felt wrong when I left my house. The march is moving fast, there are kids in large gray hoodies flanking the crowd. One kid is dragging along a shovel that seems larger than he is, its metal edge making an unbearable screech against the sidewalk. I can't see much through the sea of bodies and backpacks, the dull colors of my friends' sweatshirts bobbing in front of me like somber guiding lights. A palpable intensity in the humidity between bodies, the sweat between clasped hands. We're walking fast. We're tired and uncomfortable. We're pissed off—about minimum wage, about police brutality, about the murder of trans women of color, about so much more. The psychic tissue of our want turns the crowd into one fleshy mass. A bottle shatters. I can't see. We're trying to get forward, but we're trapped. I feel the pressure from the crowd behind me. We're infinitely demanding, but there's too much for us to even name—what we want or can't live without, what we won't admit, what we can't reconcile ourselves to. Some of us are idealists, others are nihilists; we're teen serial killers or punks or academics. We're a mess. Some of us are armed. Some of us aren't but don't know it, or are and don't want to be.

I'm at the march and honestly, I want to fight, but I don't want to be a soldier. I mean, what's the deal with having to exist as a decipherable subject anyway? What's the deal with We fought for it together, so it has to mean something? Yeah, we fought for it, but sometimes the fight is all there is, which is another way of saying, well, nothing.

Should I go home?

"There is no home here," wrote the novelist and transplant Christopher Isherwood of his adopted Golden State. Its horizon split open by the sun, its ground lurching with rolling yellow dunes. California is a strange harmony of desolation and hope, a paradox of signifying garbage and pristine landscape. The streets of Berkeley are lined with hippy-spiritual hookah stores, and across the bay, in San Francisco, are swarms of tech-boom man buns and telecommuting laptops. The soil upon which all this is built: quietly soaked in indigenous genocide, a bloodstained project that continues into the present, gently mutating into gentrification and the forced displacement of black and brown people from their homes.

And yet, because we're in California, everything remains edged with bursting flora by the wayside and its eternal succulence. From the student protests of the sixties and seventies to antifascism today, the Golden State spans decades of generational hope, even if you can't tell which way it's marked. Fading community murals, graffiti deriding cis-hetero-patriarchal capitalism, everything spun into oblivion by the yearlong sunshine—it's a jumble of radical promise, both emerging and obsolete. "California Dreamin'."

It's May Day. We're hungry. We're marching because we want just-not-this, or literally-anything-else. José Esteban Muñoz was my teacher, and he liked those extremes. He taught me that it was ok to be a punk and still believe in believing. He taught me that it was ok for my nihilism to be utopic, for my politics to also be a sensibility. "Queerness is not yet here," he cautioned us at the beginning of Cruising Utopia. "The here and now is a prison house. We must strive, in the face of the here and now's totalizing rendering of reality, to think and feel a then and there. Some will say that all we have are the pleasures of this moment, but we must never settle for that minimal transport; we must dream and enact new and better pleasures, other ways of being in the world, and ultimately new worlds."

It's May Day and we're marching. Are we peering into the then and there? A portal to the imagined possibilities of shared utopia? But my eagerness fades as the protest reaches First Friday, Oakland's monthly hipster street fair. It becomes impossible to tell who's one of us and who's just a tech bro in plaid, trying to get an artisanal lamb burger for his girlfriend in the ironic cowboy boots. We hit a corner, speeding along, and the cops give a dispersal order, but we charge anyway. Someone's started a fire, but it's feeble. I fall and someone else catches my ankle, pulling me back, but Claire drags me to a side street by the strap of my overalls. I'm on a stoop, I can't breathe, my body's insides are slopping sickly against it. What I wanted to be a "there and then" feels so claustrophobically, resolutely now. We go to the hospital because there are globules of fat and blood spilling out of a hole in my knee. I feel embarrassed. I apologize. I do it again and again. I can't stop. There's a circle of cop cars surrounding the hospital. They'll only let me in alone, but Grace and Claire bully their way into the er anyway, past the cops and hospital bureaucrats. They're clutching chocolate and Doritos from the vending machine. I find a Twix in my bloody pocket. In the ward, we meet Brian, an er tech. Like me, Brian is a Scorpio. He keeps a pair of gardening shears in his cargo pants for cutting clothing off injured limbs or god knows what else. He gives Claire and Grace surgical masks with clear plastic visors to protect their faces from any squirting blood before sticking an anesthetic needle deep into my knee. There's a cop two beds down from me with the same injury. He's loud and red and demands an x-ray. I get four stitches. Claire drives us home. It's one in the morning, so we order a pizza. We eat it in my apartment, until our talking turns into falling asleep around and across each other. It feels like we're building a fortress, but that's silly. I mean, it's just home, some weird little apartment somewhere. Still, tonight, it feels far outside the world. It feels, in its own way, like more of a utopia than the one we were marching to live.