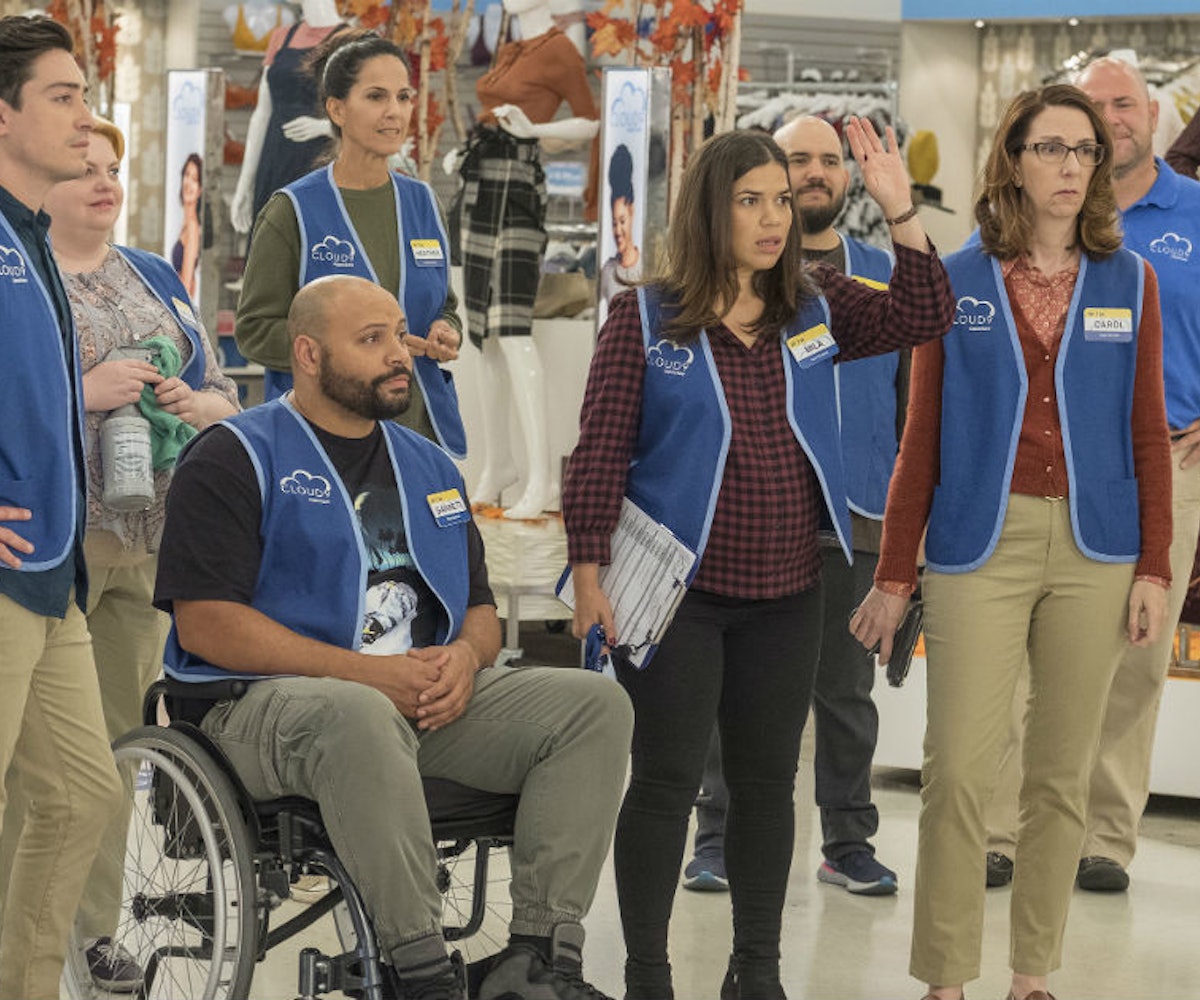 What television show best represents America? Is it a comedy or a drama? A thriller or a docuseries? Just like the task of naming the Great American Novel, it feels like an impossible one to tackle, but NBC's Superstore is making the question something of a no-brainer, as it's made a very convincing case for being the Great American Show of our time.

Superstore follows a group of employees who work at Cloud 9, a big box store that resembles a Walmart or Target. In a television world where people tend to have jobs that are either glamorous or heroic (or both), it feels quietly revolutionary to focus on a subset of people—blue-collar workers, but also the corporations that employ them and the consumers who visit the store—who aren't explored enough on television.

"I'm always looking for an idea that's relatable that you haven't seen a lot of and that's a very specific zone to hit," creator Justin Spitzer tells us. "It did seem like that there was a whole part of the population that worked in these stores and there's a socio-economic strata that shows don't deal with a lot. And I thought this environment is relatable to a lot of people."

These big box stores are located across the country, but Spitzer was methodical about setting Superstore in St. Louis, a city that's both cosmopolitan, has a "college town element," and is located in the Bible Belt, even if it doesn't always feel like it. "I wanted something that felt like it sampled as much of America as possible," he explains. "Right now, Missouri is a red state, but I remember at the time feeling like it kind of had all different kinds of people with different beliefs in one place. And that's really what you want to create conflict is people from various backgrounds. That's as quintessential American as made sense to me."

And that's what makes the show different from other series, like Roseanne, that centered around blue-collar families: It's actually representative of America's diversity. But it doesn't make it into a big deal, just the fact of the matter. The protagonist, Amy (America Ferrera), is Latina, but she doesn't wear her culture on her sleeve. It's mentioned and alluded to at points throughout the show, but it doesn't define who she is. This is also intentional. In fact, none of the characters written in the pilot had a specific ethnicity assigned, except for Mateo (who was initially meant to be a Mexican immigrant). Spitzer explains: "The characters all had personalities going into it, but once we cast them, the characters sort of over time changed depending on who was cast and how they decided to play it. In terms of the race, it really wasn't a show about any specific race. I never imagined them as white or brown or anything." What he ended up with, though, is a cast with a range of ethnicities, ages, sexual preferences, and body types—a reflection of who you'd find working at any store, big box or not.

We have Amy, the floor supervisor who had a baby while in high school, started working at Cloud 9 to support her family, and then never really left; Cheyenne (Nichole Bloom), the young, seven months pregnant, ditzy employee with an equally ditzy boyfriend; Mateo (Nico Santos), a gay undocumented resident with a competitive streak; Garrett (Colton Dunn), a paraplegic whose sarcasm knows no end; and Glenn (Mark McKinney), the overly nice devout Christian manager. Spitzer says he didn't intend for the show to be overtly political, but since it's about low-income workers, "inherently it's going to have some kind of social commentary about it." He says, "We always say we're not trying push any position, but it does comment on the lives of these people."

The show's touched on everything from immigration and health care to gun control and maternity leave. These are heavy and serious topics, but they're always approached in a lighthearted way. It's comedy rooted in reality without all of the depressive bits. A great example of this is the Halloween-themed episode "Costume Competition" from this season. When Glenn announces that the winner of the contest will receive a paid day off, Amy and Mateo team up to get other employees' costumes thrown out for being offensive and "objectifying cultures." It quickly spirals into an all too familiar conversation and impossible debate about appropriation versus appreciation.

Striking the balance between real and funny isn't always easy, though. Spitzer recalls one particularly tricky episode in which Mateo, afraid of his undocumented status, tries to get an "I Voted" sticker during Election Day because he doesn't want anybody to find out he's not an American citizen. "I was really struggling to do a scene where he legitimately tried to vote illegally—just like the conspiracy theorists say undocumented people do—with the joke being that it was all just for a sticker," Spitzer says. "And I thought the fact that it was so trivial and he wasn't actually going to vote either way would be enough to save that, but in the read, I think, there was a feeling like, Well, are we just playing into this conspiracy theory and these ideas of undocumented people are all lining up to vote illegally? So, we backed away from that a little bit."

There are other topics Spitzer says he wouldn't try to take on, like school shootings. "I just wouldn't want to be faced with trying to find humor in that," he explains. "I think from the get-go, we look at issues that you can have a funny take on." They're also not pulling from the news for every single episode; they try to be selective. "We don't start off with a topic and say, 'Let's find a way to explore this,'" he explains. "We'll look at breaking stories occasionally, and when it touches on something social, we'll try to explore that or sometimes we'll use a social issue as a jumping-off point in order to brainstorm on stories, but we've never sat around and said, 'Okay, we need to do a story about immigration, let's talk about immigration.'"

There's also the concern of coming across as un-PC. Spitzer wrote for The Office for a bit, which has many episodes that haven't exactly aged well (we can't see "Diversity Day," the second episode of the series, airing today without some kind of Twitter vitriol). But the hypersensitive culture that's arisen is also something Spitzer and his team have used to their advantage. He brings up this season's premiere episode which touches on Glenn not understanding the #MeToo movement, and as a result, completely mishandling a situation involving sexual harassment. "That's an area where it's a story we can do now that we couldn't do 10 years ago, and in certain ways the more easily people get offended, the more fodder we have to find stories because you get comedy out of people's fears of saying the wrong thing," Spitzer explains.

Perhaps, then, that's what makes it most clear that Superstore is a Great American Show: It doesn't need to announce itself as such, or be centered around the kind of people we're trained to think of as "heroes." As Ferrera told Vulture in an interview, "There is a small, silent revolution in pointing the camera at the common person who is not saving the world or the world's best FBI agent, but who is just getting by and finding the humor and the love and the stakes and the victories and tragedies in everyday life." And there's nothing more American than that.