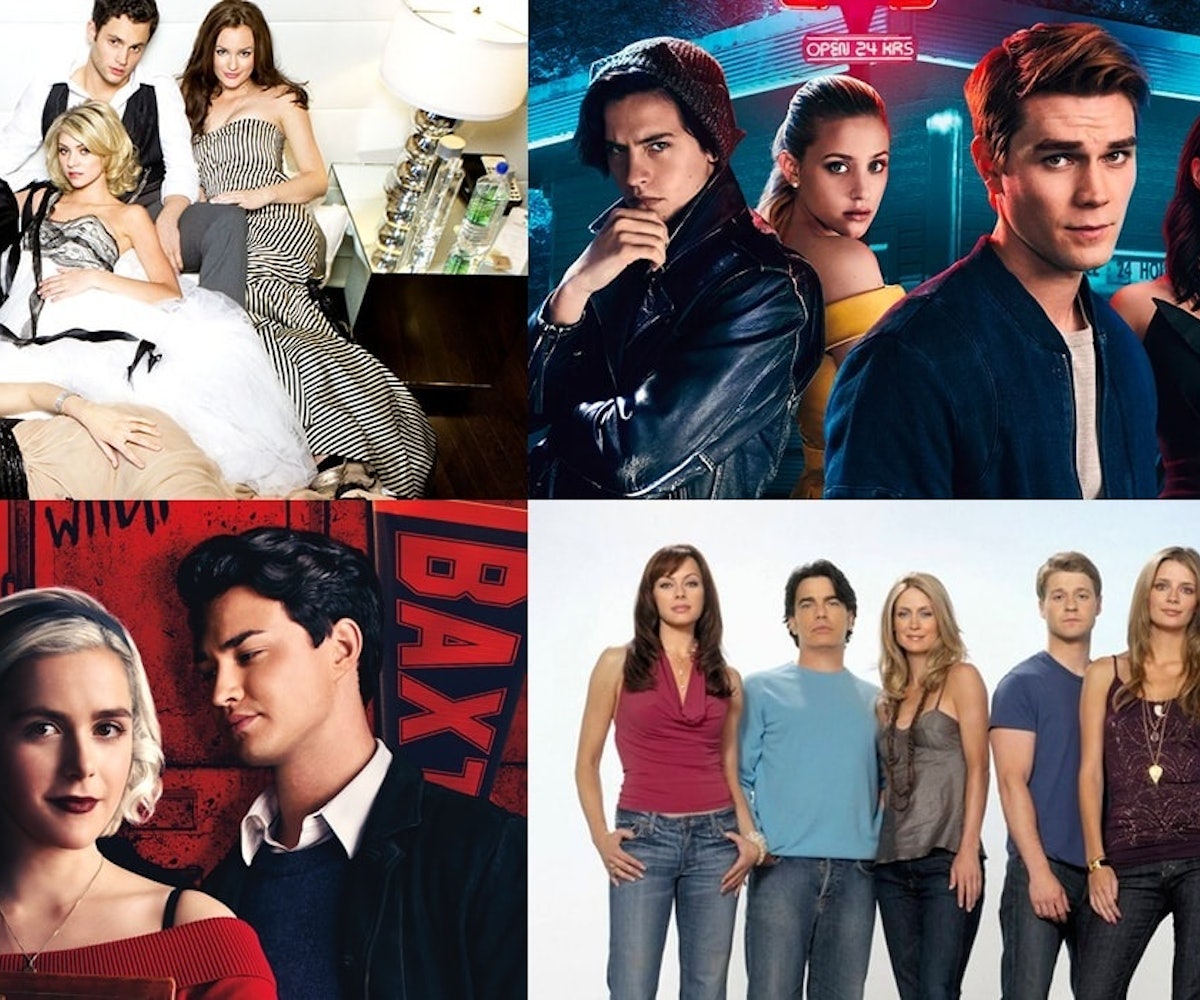 Photos Courtesy of Amazon and Netflix

Hallucinations, seizures, shootings, stabbings, a drug called "fizzle rocks"—these are just some of the things the students at Riverdale High are dealing with on this season of the CW's Riverdale. Taking place under the noir narration of South Side Serpent gang leader and lead character, Jughead Jones, the show is just one example of the dark, gothic trend of teen television today. But there's also Netflix'sChilling Adventures of Sabrina, which veers away from the quirky, lighthearted humor of the 1990s series Sabrina the Teenage Witch, and instead heads in the direction of horror, rooting itself in the occult. There has been a trend, in recent years, of teen dramas becoming darker, adding an element of mystery and noir. In many ways, one could argue that this is reflective of our political climate—a direct response to the struggles of teenagers today.

Teen drama has changed dramatically in the past 10 to 20 years. While Buffy the Vampire Slayer paved the way for teen horror in the late-'90s to early-2000s, it certainly wasn't the norm as far as teen television goes. For the most part, television shows aimed at teenagers have historically featured high school students having sex, fighting with their parents, getting themselves into love triangles, and more of that sort of everyday drama. In my own high school years, I watched The O.C. and One Tree Hill, each episode featuring characters making poor decisions and getting themselves into classic high school trouble. Their problems, while exaggerated and sometimes outside the realm of the average, middle-class teenager's experience, were at least normal. They were rooted, still, in reality.

That doesn't mean that horrific events didn't intrude on these soapy realities: In one dramatic episode of One Tree Hill, the students of Tree Hill High School survive a school shooting. Degrassi, too, included a school shooting episode, leading to the character (played by Drake, actually) losing his ability to walk.

As time has passed, though, teen dramas have decided to veer away from reality. We saw this trend begin with Gossip Girl. While the show was still about rich kids sleeping with one another and arguing with their parents, not unlike The O.C. and Beverly Hills90210, Gossip Girl introduced an air of mystery, with an unknown personage—the titular Gossip Girl—watching the characters' every move, sharing secrets that seem almost impossible for anyone to know; the identity of Gossip Girl was revealed in the final episode, but the narrator's anonymous presence throughout the show lent it an aura of mystery, relatively benign as it was. Then, Pretty Little Liars followed in Gossip Girl's footsteps, introducing an unknown watcher referred to only as "A," but this time, the mysterious figure was out for blood, committing murder and consistently putting the lead characters in harm's way. Pretty Little Liars took itself outside of the normal teenage experience, drawing viewers in not by giving the characters relatable problems, but by building a sense of intrigue that was far removed from the everyday.

Now, we have shows like Riverdale that have delved fully into noir, using gothic tropes and story lines that are often outside the realm of most teenagers' lives. Riverdale features, for instance, the show's lead, Archie, using his own blood to sign a book belonging to his girlfriend's father in order to prove his loyalty to the family. Sabrina has its titular character doing a similar thing, only she's using her own blood to sign a book belonging to the literal devil. In fact, Lucifer himself is even a recurring character in the second season of Sabrina, with some viewers now lusting after hot, hot Satan. Even the backdrops of those shows are eerie, with gothic architecture depicted alongside menacing soundtracks.

While the shows might delve into serious topics relevant to teenagers today—sex, drugs, relationships—everything is presented through the lens of horror and noir. Riverdale, for instance, features queer characters coming out to their friends and parents, and then being sent to conversion therapy—but those episodes, which depict real horrors endured by teenagers, still manage to remove themselves from reality by doing things like incorporating hidden tunnels and aggressive nuns and murderous uncles in the story lines.

In many ways, these outlandish plot points may be reflective of the problems teenagers face today—political and personal crises more sinister than those encountered in the '90s and early 2000s. With school shootings that occur on a regular basis, the victims being attacked by Fox News pundits and the president himself, television needs to do more than feature teenagers having sex and arguing with their parents because those issues just feel inconsequential. And a school shooting episode like that in One Tree Hill or Degrassi would just be in poor taste, exploiting and fictionalizing the very real fear and trauma that teenagers face today. For this reason, teen TV has had to go deeper into the genre of noir to provide some escape. Each season, and arguably episode, of Riverdale is wilder than the last, moving further and further from reality. The same can be said of Sabrina, a show far removed from mortal problems simply in its premise—witches. And now, with the spin-off of Pretty Little Liars, The Perfectionists, I can only imagine that the new iteration of the show will delve even further into darkness, danger, and intrigue than the original series.

Teenagers are more political than ever, Gen Z making its voice heard and engaging in the discourse of our time, certainly more so than I did as a 16- or 17-year old.

just don't suffice in today's political climate. TV has to dive into darkness, horror, and noir—a darkness that surpasses even the one in which we are currently living.

NEXT UP
Beauty
Jenna Ortega As Wednesday Addams is Serious Soft Goth Beauty Inspo
The Art Issue 2022
Natasha Lyonne Doesn't Want To Get Lunch With You
Entertainment
Precious Pepala Is Going From TikTok Covers To Her Own Resonant Songs
The Art Issue 2022
From Renaissance To Gemini Rights: The Stories Behind 2022's Best Album Covers