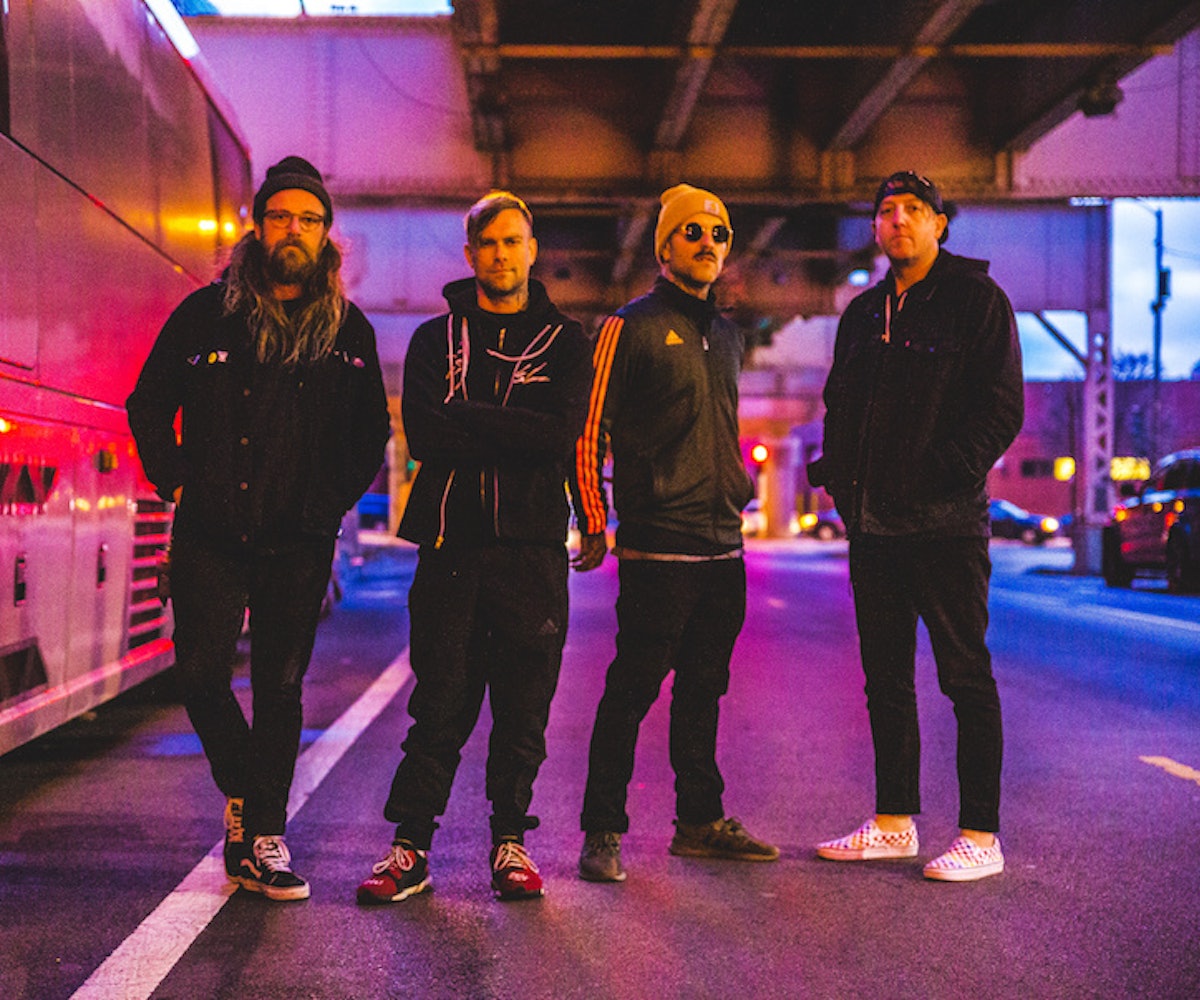 A door creaks, then swings shut. The music creeps in like goosebumps down your neck: "In the sensory cave that you made / I lie awake," sings The Used frontman Bert McCracken. This is his favorite line from "Cathedral Bell," the band's new song, premiering exclusively on NYLON.

"It reminds me of being a little kid," McCracken said over the phone. "I had a really hard time with sleeping when I was younger. I just never wanted to go to bed, and when I did, I could never sleep. It just reminds me of being young and in the dark and up way past my bedtime."

Some of the other lyrics, especially about being "alone with my thoughts" and "stuck in a box with no room to stretch," skirt childlike innocence and feel eerily relevant to life today. The bridge's "I've got moves to make but I can't move" could be a motto for anyone antsy to get out of their house. "Cathedral Bell" — the third single off Heartwork, The Used's eighth album, due out on April 24 — arrives in a world that's quite different from the one it was originally written in, but its message resonates now more than ever.

"Feeling stuck is one of the major themes of the record," McCracken said. "I think that yeah, now we're stuck inside and stuck with ourselves, but I think that we've been stuck for a long time… There's been a longing to heal something with art again."

Heartwork's purpose, then, was "to create something that we could get lost in." For the current lineup — McCracken, with his signature throaty scream; bassist Jeph Howard, who's been there since day one; drummer Dan Whitesides, who joined before 2007's Lies for the Liars; and guitarist Joey Bradford, who came on after their 15th anniversary tour — that meant channeling the band's energy from their early days. "There was really no pressure to do anything or be any certain kind of band," McCracken recalled. "It was just, how's everybody feeling today? And what kind of song do you want to write from that feeling?"

Kids who spent their formative years cranking early 2000s emo music in their headphones are likely familiar with The Used's 2002 debut self-titled album and its followup, 2004's In Love and Death. Songs like "The Taste of Ink" and "Buried Myself Alive" have been fan favorites for nearly two decades, and Heartwork falls back on the sound that made the band so beloved in the first place. The Used isn't "one of those bands who's precious about our new stuff," McCracken said when asked about performing songs he wrote when he was 19. "The magic of nostalgia is overwhelming for the first two records… We love playing the old stuff. I think we always will."

Nevertheless, Heartwork's first two singles — "Blow Me" and "Paradise Lost, a poem by John Milton," one of countless literary references on the LP — kicked off this new era off with a bang. The latter's standout line "before the yellow fades to blue" calls back to 2003's "Blue and Yellow."

Longtime fans will notice Heartwork rhymes with 2009's Artwork, the band's fourth LP, written during what McCracken called a "really destructive" and "very, very dark" time in his life. "It was probably the first and only time in my career where going to the studio and being around the guys in my band felt like work," he revealed. "I was really hungover the whole record… it was awful, it was terrible, you can hear it in the record itself." The new album involves the "complete opposite" state of mind, he said, but it still comes from "the deepest, most personal places in our heart."

McCracken paused to cough, then quickly clarified: "That's not a corona cough, by the way. I just smoke a lot of weed."

"—there was this reconnection to myself," he continued, opening up about his past as an "insane alcoholic" and referencing Heartwork's "To Feel Something." The last track touches on the need to, well, feel something — literally anything — and culminates into a guttural scream, a fitting grand finale for the LP.

"It's a muscle just like any muscle," McCracken said about keeping his voice in tip-top shape over the years. He's currently taking vocal lessons from industry legend Melissa Cross, who's coached bands like A Day to Remember, Underoath, and Senses Fail. "We warm up, we try to warm down, and we remember that it's rock and roll," McCracken added. "I think people appreciate the fact that you're just up there and you're singing from the heart, no matter what it sounds like."

Given the circumstances, it'll be a minute before The Used is performing onstage, but McCracken's eager to hit the road again. Touring "feels like hanging out with a bunch of friends," he said, and the band is "mentally and physically the healthiest and happiest we've been maybe ever."

They played around with "poppy production stuff" in the studio and drew inspiration from everyone's unique musical influences, leading to a record that's a bit "all over the place," McCracken admitted. He's got a strong love for '80s pop, from Michael and Janet Jackson to Whitney Houston to Mariah Carey in the '90s. Meanwhile, his daughters — 6-year-old Cleopatra ("Cleo") and 2-year-old Minerva ("Minnie") — are growing up listening to a healthy combination of The Used and the Frozen soundtrack.

"It's funny to catch them singing [The Used] songs when I'm not around," McCracken said. Cleo may be a budding songwriter herself; she offered constructive criticism when a demo of "The Lighthouse," the band's upcoming collaboration with blink-182's Mark Hoppus, came home. "The hook in the song is, 'I can be your lighthouse,' but it used to be 'can't,'" McCracken revealed. "[She] was like, 'Dad, you should change it to "can," because you can! You can be it.'"

Of course, he changed it for her.