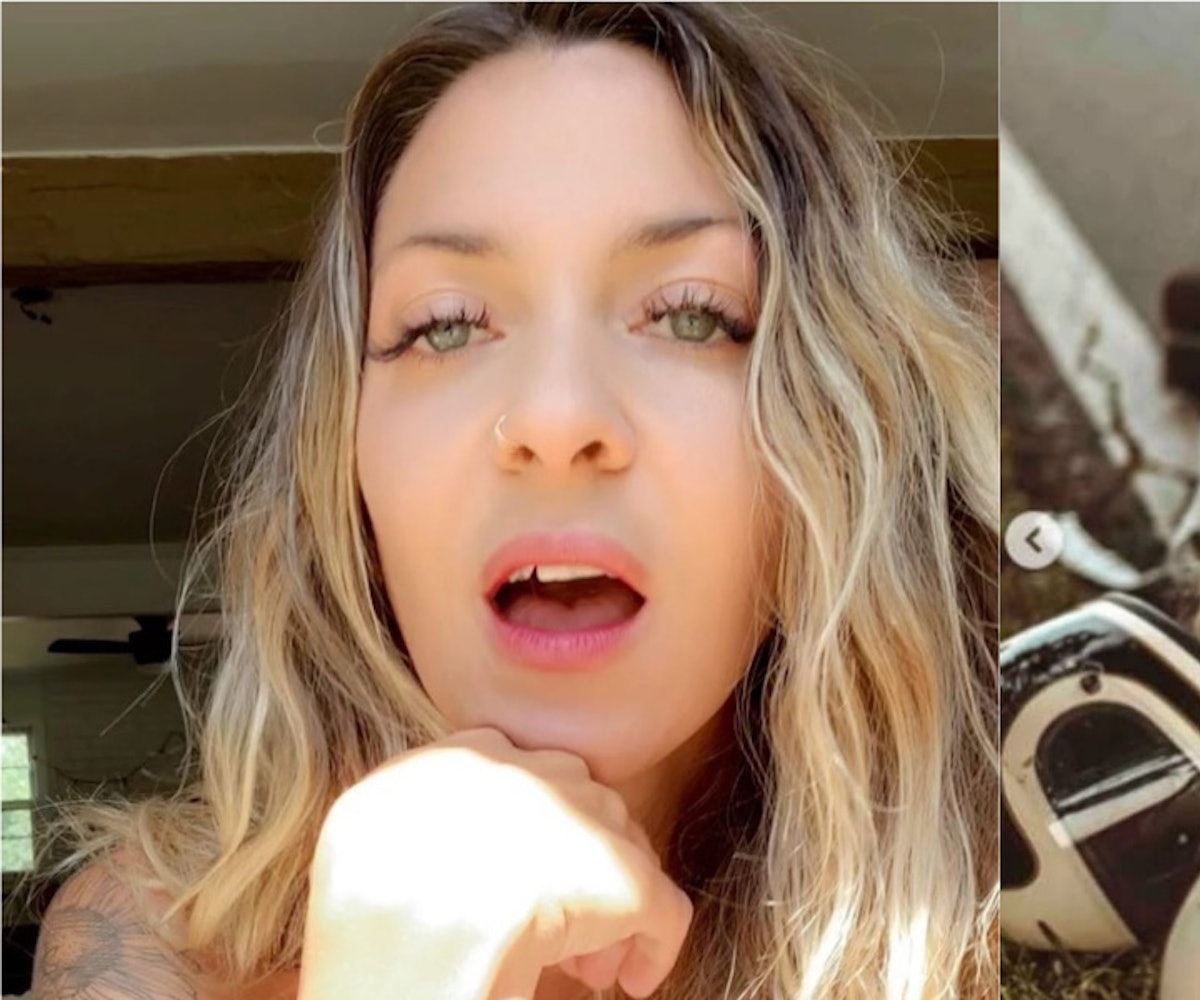 UPDATE 8/23/2019 12:38pm: According to a new Instagram post shared by Mitchell, she previously lost her significant other due to a motorcycle accident. "I've opened up about miscarriage, divorce, anxiety, losing my partner in a moto accident 3 years ago, and navigating the grief that followed," she writes. View the full post here.

Nashville-based influencer Tiffany Mitchell, @tifforelie on Instagram, has garnered attention from the internet after sharing a carousel of photos taken before and after she allegedly got into a motorcycle accident. Not only does the internet think that she staged her fall from the bike, but some are pointing out that the precisely placed Smart Water bottle next to her injured body looks like a brand endorsement. Mitchell has since archived the post and denied both of these claims.

BuzzFeed's Tanya Chen first reported on the story, sharing screenshots of Mitchell's carousel in a Twitter post. "This is me and my bike about an hour before I got into an accident," Mitchell wrote in the caption of her now-archived Instagram post. She continued:

My sweet friend @lindseygracewhiddon was shooting and my OTHER sweet friend @martynmazz was riding while a friend of Lindsey's drove the Jeep. We played around for a couple hours before heading back up to Nashville around 7:30, and on a secluded two lane stretch, I misjudged a curve, took it too fast and my bike went off the road. It slid through the grass and I hit the pavement.

She detailed her injuries as limited to scrapes on her left side and invited users to "scroll through the pics to see how much of it Lindsey captured!"

In response to the tweet, some have shared their motorcycle injuries from minor crashes, pointing out that nothing similar is visible on the side Mitchell says she was injured on. Mitchell has since responded to accusations that she staged any part of the crash in a lengthy Instagram story, as well as in statements to BuzzFeed. "Nothing about this was staged. I'm sad that some people are taking it that way, but it's just not the case," she told the site. She says that no photos were taken until after everyone confirmed she was not in danger and was laying on the side of the road to rest. Mitchell adds, "I didn't know she was taking [photos], but later on when she showed them to me I was so grateful that she captured such an intense moment for me."

Nevertheless, Twitter jokes have rolled in. @MikeIsaac wrote, "Always be influencing even as you feel the sweet embrace of oblivion."

Others commented on the perfect lighting. "I hate it when you get in a motorcycle crash and the soft orange light from a perfect sunset falls on your broken body just so," @JayShams joked.

Mitchell's riding outfit of choice doesn't make sense to others. "There is a lot to unpack here but let me just say an 'influencer' riding a motorcycle without a jacket and a tiny shirt is incredibly irresponsible," @SamLovesCats wrote, and they're not wrong. Mitchell addressed concerns for her attire in the IG story, saying she was not wearing a jacket or gloves due to it being hot out.

As for the water bottle in the photos, Mitchell denies that it was placed there for ad purposes. The day of the accident, Mitchell states in her IG story, "There was no brand work being done." In a statement to BuzzFeed, she said, "I would never turn a very important personal story like this into a brand campaign," adding that "the water was given to me while I was resting."

Though Mitchell has archived her initial crash post, comments have flooded in on the rest of her feed, especially on an #ad post for the beverage Bai in which she's shown sitting on her motorcycle. "Girl, we all saw motorcycle accidents and people like me were in one, even with clothes on our skin gets dragged on asphalt and leaves bad scars... but your skin had some black parks (god knows from what) and no blood or scar on your skin... and that bottle faced perfectly toward the camera?" one user wrote.

Another user asked if Mitchell would "crash this one with a smart water in hand?" Another added, "Do yourself, the female riding community, Nashville riders, and all those who've had tragic accidents and lost loved ones due to bad accidents—just don't next time, it really leaves a terrible taste in people's mouths."

Mitchell continued to defend the legitimacy of her accident and injuries in the photo, calling it "very bad road rash" in response to another fan callout.

Whether you believe her or not, there is a lot to unpack here. As user @PenLlawen wrote, "Chose your level of Influencer Dystopia" for this one: