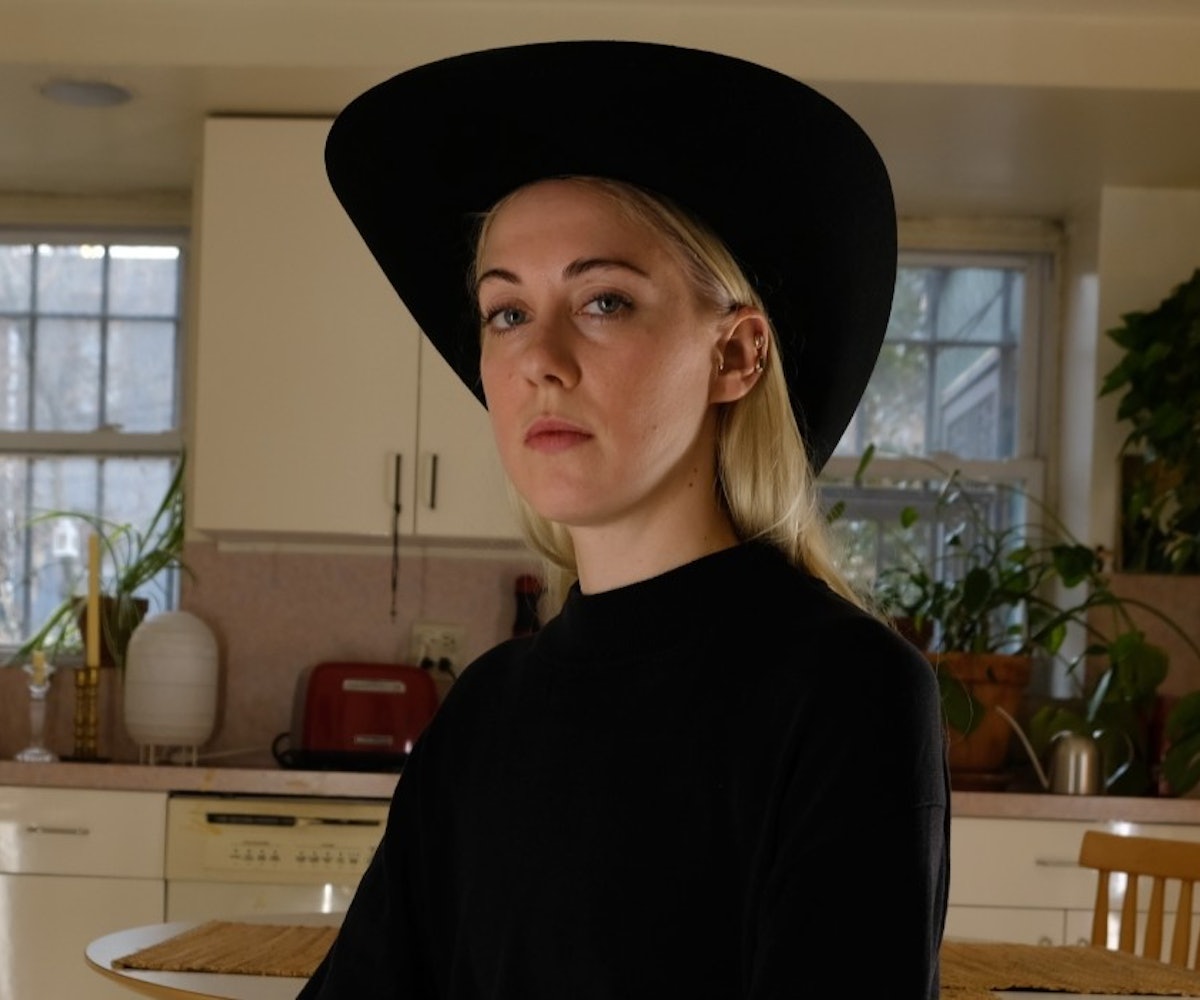 In April of 2018, Mackenzie Scott, who makes boundary-pushing pop music as Torres, announced to the world that she had been dropped from her label. "My former label, @4AD_Official, has decided to drop me from a 3 album deal for not being commercially successful enough," she tweeted. "I wish them all the best. Also, fuck the music industry."

In the public arena, her announcement jump-started a conversation about the financial realities of being an indie musician. Privately, Scott found herself at a stalemate on what to do next. Discouraged, she stopped working on her own music, and briefly contemplated on getting into writing film scores. She began exercising as a way to cope with the anxiety, and got a part-time job as a bartender to pay the rent.

"I spent a lot of time doing nothing," she admits one January afternoon, nursing a warm beer in the rustic interiors of a Brooklyn bar, steps from her apartment. "Wanting to become a better person and work on my own evolution... I think the constant touring and album releasing cycle, it doesn't necessarily make for the best human."

She also fell in love. And it is this burning whirlwind of a love story that's the focus of her first album since 2018, Silver Tongue. Releasing on Merge Records on Friday, the nine-track project is a fierce homecoming for Scott, her crystalline vocals near gleaming in the light, until a closer inspection reveals a surface pricked with barbed wire and knots. She furtively asks over tinkering percussion on the opening song, "Good Scare": "Are you planning to love me through the bars of a golden cage?" Named after storytellers who can spin fact out of fiction, Silver Tongue enchants on first-listen, and navigating its misty-covered forest with just Scott's unreliable voice leading the way is an endlessly turning puzzle.

"It's basically about convincing people that they've got free will," Scott said of the album, grinning. "But that that free will ultimately end up being used to deliver me what I want."

Entirely produced on her own, Silver Tongue is as equally a biting act of persuasion as it is, in its making, one of defiance and agency. Scott's wide revolution back to music necessitated a wresting back of control, of diving into the nitty-gritty, and versing herself on the business side of her hobby-turned-career. As Scott puts it, confidently and resolutely, "I wasn't paying attention, and I got burned… I think I'm just better at trusting my gut now."

Ahead, read the interview.

Earlier you said that you think "touring doesn't make for the best human." What did you mean by that?

Just in the last couple of years, I've really grown up a lot, and I've really gotten a handle on every aspect of my career, including all the business stuff that I don't really like thinking about. I'm really running the ship now, and it's really hard, but I feel a lot smarter and a lot more well-rounded as a person.

What prompted you to start work on Silver Tongue?

I don't really itch to get back to writing unless I've got something that I know I want to say. I was having trouble in my personal life and my romantic life. And for me, a lot of people ask if writing is about therapy for myself, and I don't really like that question because it's not about therapy, it's kind of the opposite. It's about taking control. Writing to me is about saying something in a way that, whatever it is, has never been said, and saying it in a way that is so moving that it actually has an effect in the real world. This instinct to write, it was bred out of wanting to take control of my situation in my romantic life. I kind of thought maybe if I started writing the songs, my girlfriend would... It's not even that I thought she would hear them, but it was just a way of being in control.

You chose to produce this album on your own. Was that an attempt of trying to exert as much agency over your work and your music?

That was most of it, yeah. I don't want to make it seem like I'm anti-co-producing or whatever, but that was a huge part of it. I just wanted to control everything. But the other part of it was that it's really expensive to hire a producer, and it just felt like I already knew what I wanted everything to sound like. I had already demoed everything, and I had my engineer ready, and I was able to book a studio, and I just thought, What do I need a producer for? I'm not searching for answers about how to make this sound a certain way. I know how I want it to sound. It made sense for me to do it myself, and I didn't really have the budget to just throw money at a producer for the sake of making it sound slick. Mostly it was just confirmation for me that I can trust myself. I can make a record myself and still have everything that I had before. I'm not relinquishing any of the good stuff by not working with a producer.

"Silver Tongue" is the end of the album, and in the lyrics, you have a line about how a teacher warned you to watch what you sing because people will believe it. What was going through your mind when you were writing the song?

Well, first of all, that did happen in college. Part of the class was to take home the assignment, write the song, come back and perform it. So everyone's passing an acoustic guitar around the room singing the song they wrote for homework, and I did mine. After I played my song, I just remembered my professor telling me that... Basically, he called bullshit on my lyrics. He was like, I don't think these are the best lyrics you can write, but when you sing it, what I fear is, that you could make somebody believe this when you sing it. It's just something that's always stuck with me, I've always thought it was funny. And I always thought it was such a weird criticism.

The thing about someone who has a silver tongue is usually that person knows that they do. It's someone who obviously, for better, for worse, has the power of manipulation, and people should be really careful about how they use that power if they know that they have it. So essentially, this album is all about trying to get what I want without doing it in an evil way.

You said that you want your music to say new things about a topic that hasn't been said before; this album is about love. Did you learn anything new about that emotion?

I did actually. Something that I continue to learn about love, is that there can't be any pride. It's so much about swallowing your pride, and I have so much of it. And that's part of what I realized: I had a lot more pride and a major refusal to concede in most ways. I'm someone who loves to win any argument and get my way. If you are going to be in a relationship with somebody, and you really love them, and you actually want it to be healthy and you actually want it to last, you can't have any of that. You actually have to be willing to lose fights. I don't mean violent fights. I just mean all of the little conflicts that we have, you have to concede half the time, at least.

I guess it's good that you found control in the other half of your life.

At least you can pretend like you have control when you write.

How is it being signed to Merge?

I'm excited about it. I mean, not a lot has happened in the time that I've been signed. The record hasn't come out, but they're great people.

Did you ever consider staying independent?

In the time that I was independent, I considered it. I released a couple of songs in that time on my own, they were just demos, but it was kind of a litmus test to see if people were still listening. And the truth is it's really hard to release songs and get albums promoted and actually get money to make records if you're not on a record label. It feels really good to have people behind me that are all in charge of their respective jobs, and they're all good at jobs that I don't know anything about.

It seems like the idea of being independent has become really romanticized recently.

Yeah. It takes something miraculous to make it without the aid of a team of people. And, you know, I've tried it. I'm not saying that other people can't or shouldn't, but in the realm that I would like to exist in—which is, I want to become more successful than I am—I'm not looking to sustain what I have. I'm looking to actually have more of an audience, and I'm looking to sell more records. I'm looking to play bigger shows and bigger festivals. I want more exposure, and that is not really something that one accomplishes on one's own.

After you were dropped from 4AD, you tweeted "Fuck the music industry." Do you still feel that way?

It's interesting. The truth is that the music industry is a vile place to be. That's not me being sour grapes about it. Obviously, I'm still in it for a reason, and I have a lot of respect for the people that are behind me, and a lot of gratitude. But I think that if you consider the fact that the CEO of Spotify is worth $2 billion now, it gives you reason to say, "Fuck the music industry." I want to be part of it, and I want to change it. It's a conflicted emotion, it's really conflicted.

I have learned a lot of hard lessons. One hard lesson that I learned was just because you have money and you have firm ground on which to stand, doesn't mean that you're going to have it a week or a month or a year from then. Just because you have a new album out on a really reputable record label, doesn't mean that they'll be promoting it a month from that. Another hard lesson I learned was to be really careful about who you sign your livelihood over to, don't get stars in your eyes. I wasn't paying attention, and I got burned, and I learned a lot, and I don't regret it. I'm really grateful that happened because I think I'm just better at trusting my gut now.

I think I needed that. I think it was good for me to get knocked down. I think I'm a better person because of it, and I think I'm a better artist because of it. It helped me in a lot of ways, to see what can happen and actually experience it and then be forced to start over and decide whether or not I still wanted to do this thing that I chose seven years ago, eight years ago. And then to learn how to do it more sustainably. I'm really proud of what I've made, and I'm excited to have it in the world. And not that I wasn't with previous records, but this one was the most fought for.