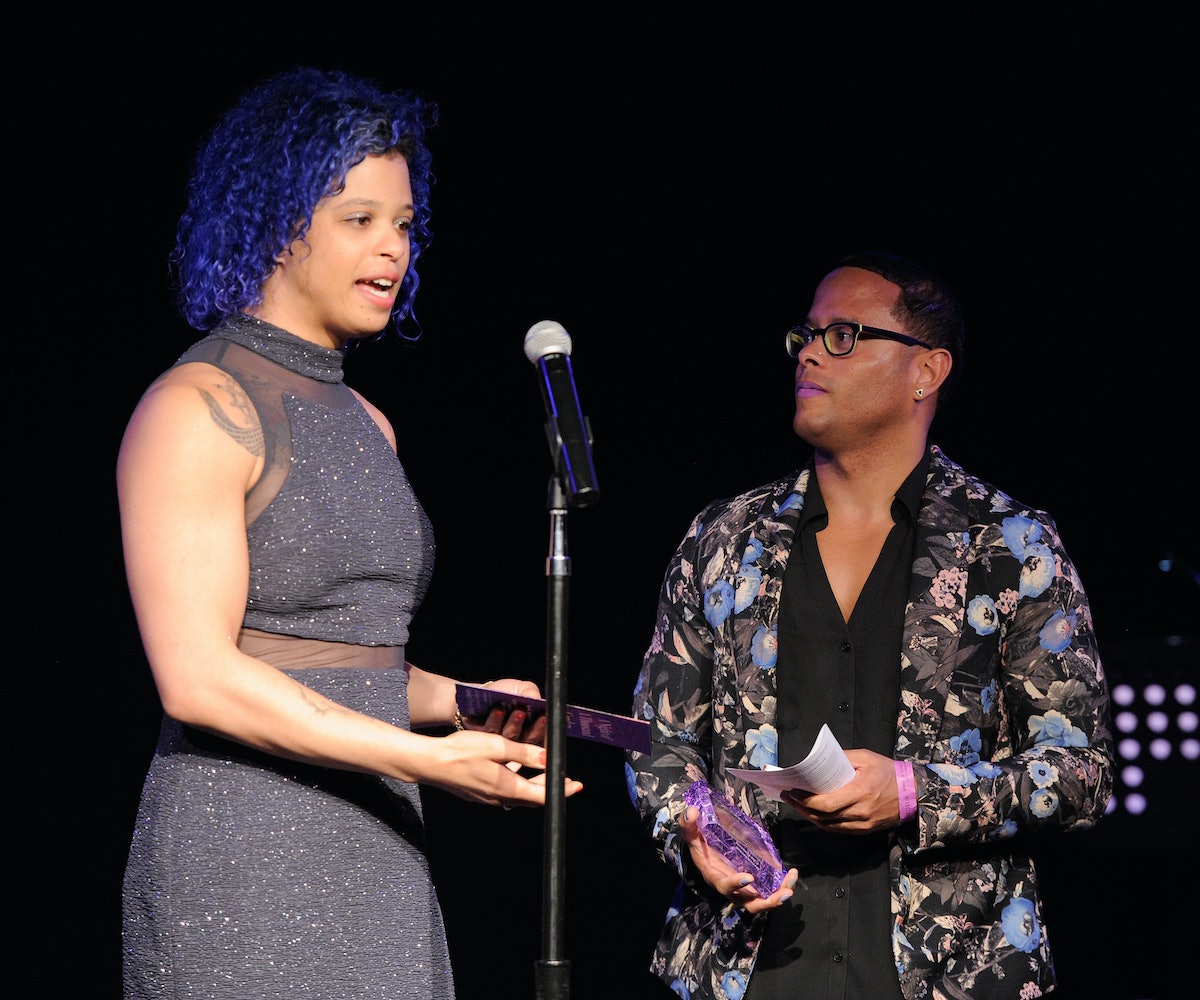 One of the primary ways that Black and trans folks have power is their ability to tell their own stories. This is something that the filmmaker Tourmaline, who has a deep background in community organizing, understood very early on.

It's what led them to tell the story of Marsha P. Johnson, a spirited trans woman and permanent fixture in New York City's gay scene for decades until she died in 1992. Johnson was a drag performer, an AIDS activist, and one of the figures at the forefront of the Stonewall uprising. Johnson's story is told in Happy Birthday Marsha!, a dramatized version of the hours leading up to Stonewall, by Tourmaline and her co-director, Sasha Wortzel.

Tourmaline takes pride in demonstrating that people who are disabled, people who are sex workers, people who are navigating harsh conditions still live lives of beauty; showing this onscreen can feel like the ultimate act of resistance. I spoke with Tourmaline over the phone about their work, their untraditional beginnings in film, and their recently changed name. Check out our conversation below.

What the inspiration was to change your name and why did you choose Tourmaline?

I've always been connected with tourmaline for a very long time, and it's a stone of protection and grounding. In this moment, that feels really particularly important to me. A few years ago, I was Dee Rees' assistant on Mudbound, which is a film shot in Louisiana and was about this Black family. We were working on all these really haunted plantations when we were filming, and rooms that were former cabins for people who were slaves. We were filming in mansions of plantation owners, and the whole set was just so haunted.

The ancestral trauma there was running deep.

Exactly. It was so deep. So we were talking about it a lot, and I got this big chunk of tourmaline, and I kept it on me at all times. It's really important to recognize when my life is shifting and moving, and when I'm releasing a previous iteration of myself. So name change, for me, is a way to do that and embrace the moment of where I actually am right now, and then release a former version of myself that was beautiful and got me to where I am, but doesn't necessarily reflect where I am right now.

You were never formally trained in filmmaking. How'd that start?

Yeah, I never went to film school. Like, working for Dee was my film school. Also, when I was at Queers for Economic Justice, which doesn't exist anymore, a group of us, who were either currently experiencing or formerly experienced poverty, got together, and we called ourselves "welfare warriors." And we did a bunch of things, including a campaign around the welfare office which treated people horribly. But also we did this documentary. We filmed our lives and our stories. We were like, we're kind of tired of people coming into our communities, making movies about us, and then taking that and leaving. Let's tell our own stories, and we did that. It exists on YouTube, and it is called Taking Freedom Home. We made a documentary about the issues that we face, our travels and trips, and styles. That was the first time I ever really like made a film. And then we screened it at the LGBT center, I think 10 years ago this June. And it was really beautiful. So yeah, that was like the first time I ever made a film, and it had just such a deep impact on me and what I wanted to do.

So you went from that to working with Dee Rees. What was your first independent project?

The Personal Things came out first, and that's like a short animated piece about Miss Major and the small everyday acts that she does to resist and refuse the status quo. Micah Buzan, who is this really amazing activist and artist, did the illustration. And Pamela Chavez was the animator. And Joe Weiss, who does the score for almost all my work, did the score for that.

How did you first hear about Marsha P. Johnson? Why that project was important for you?

I was an organizer, and it was similar to a moment like this where a lot of us who are Black trans women, and Black gender-nonconforming people, and non-binary people were experiencing a lot of loss. So people in our community were being killed. I remember some other incredible activists, [and I] organized this memorial for a person named Sanesha Stewart who in 2008 was murdered in The Bronx, and she was a community member. We were both clients of the Sylvia Rivera Law Project before I worked there, and she was murdered. On top of that, the way that the press talked about it was horrific. The New York Post and the New York Daily News were just so anti-trans, anti-Black, anti-sex worker. A group of us came together and did this memorial at The Bronx Community Pride Center because it felt really important to lift up and honor her life and put the focus back on her and not on the really horrific actions, the news of the person who had killed her. We really wanted to put the focus on her and her family and keep it there. And it was this powerful, powerful moment.

At the time—and it still makes me feel so emotional—I was really looking for models and examples of how other people came together in moments of immense silence. I was looking at the Combahee River Collective, and one of the challenges that I was having is that Black trans women weren't foregrounded. You know, the historical erasure of what our community did was so deep and continues to be. It's a little different now, but at the time, you couldn't find Marsha P. Johnson on the internet, at all. And so, I started to learn and hear more about Marsha and befriend this person, Randy Wicker, who lived with Marsha for 15 years. I would watch home videos Randy made of just hanging out with Marsha and interviewing her talking. Like, in the kitchen, she would be showing this beautiful coat. The police had just beaten her up and tore her coat. Then she would switch to another moment where she would go into the other room and put on her Valentine's Day outfit. It would just be these home videos, and it was really powerful to just be in the presence of people who were sharing their stories about what Marsha did, who Marsha was. I would take that information, and I would put it on my blog and just share it with people, and we would talk about it. And then, the 40th anniversary of Stonewall happened, and the New York Public Library put all of Diane Davies' photographs from the early days of gay liberation up. It was amazing because I would see Marsha as a young person in color photographs, hanging out or being at a protest. That was a really powerful moment.

What roles do you think culture and cultural production play into activism, and queer activism in particularly? Obviously, people talk a lot about visibility, but is it deeper?

Absolutely. I'm always looking at cultural organizers and liberation movements. So to me, culture and art and aesthetics are so central to social movements. When I had the identity of "community organizer," I thought about the five Is of oppression. We talked about how oppression is ideological, institutional, interpersonal, internalized, and leads to isolation. So as an organizer, we would try it against institutional violence and interpersonal violence. We would try to create space so that we weren't isolated. But as an artist and cultural organizer, my work seeks to get at the messages that underpin the institutions, those ideologies; and also the feelings that we carry around in ourselves, that internal oppression. How we feel about ourselves affects how we're able to be in the world. Violent oppression doesn't just have a material valiance; it also affects our spirituality and our feelings, our views of ourselves. So that's what my art seeks to do by reflecting back our beauty and our power and our everydayness. It seeks to show that everyday people change the world through very small acts.

[For example] Miss Major and The Personal Things talks about how a Black trans person, a Black trans woman, changed all of her ID from male to female because she didn't want to be in the bathroom and get stopped and not have "female" on her ID. Then, she realized, Wait a minute, I am a trans person. I want people to love me for being trans. And so she changed all her ID back from female to male. And it was really powerful for her because she said, This is a way that I'm unruly! Like other people should do whatever makes them feel safe and comfortable, but I want to be unruly to this moment where I get stuck in a category. I want to be unruly and ungovernable. That was her small way of resisting. She talks about small resistances similar to Marsha. Like Marsha built a care collective. She housed people who didn't have a place to sleep at night at the Star House. That was central to her life work, being in service of the community. There were also regulations where if you were a trans woman and had "male attire on," you would be arrested and put in jail. It was a moral code in New York City that the police enforced and enforced at Stonewall. At that valence, aesthetics and fashion are deeply criminalized. She has the criminal aesthetic. To me, that shows the kind of power of aesthetics and fashion. The state is literally seeking to criminalize expression. It's an art that carries real risk. Her fashion was an art form.

To me, that's one of the legacies that I'm working in right now. I think my work seeks to show everyday acts and this kind of lineage of criminalized aesthetics. It's also seeking to shift the messages that we have internalized about our power and our beauty. It seeks to dismantle some of the ideologies that underpin these bigger institutions. I think about systems of change. Yes we have to change policies, yes we have to change structures, but we also have to change how we think about ourselves and how we feel about ourselves. That is central to systems of change. Art can really do that.