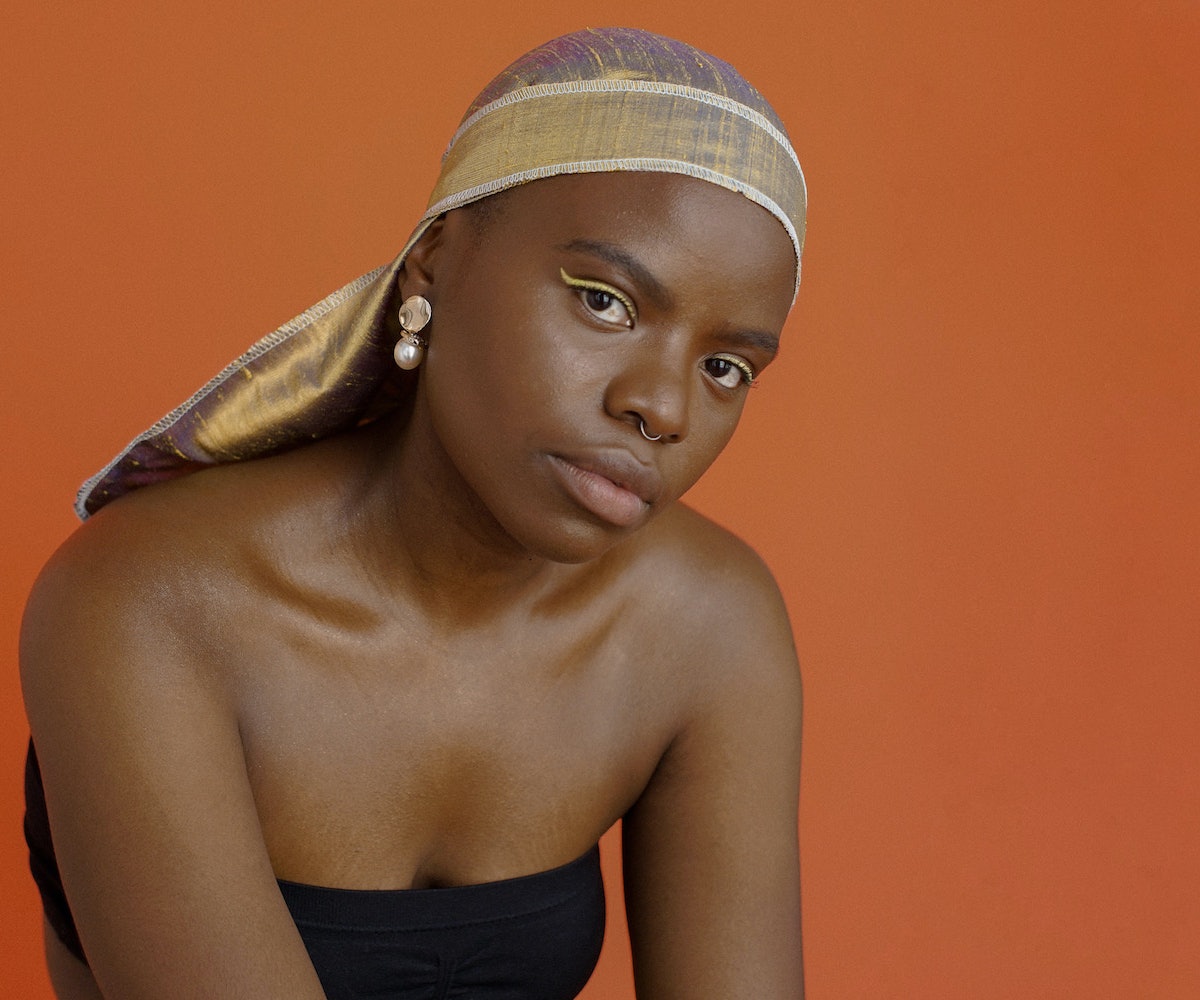 Please allow Vagabon, aka Laetitia Tamko, to formally re-introduce herself. After the Cameroonian-American singer-songwriter found success in the indie community with her punk and electronic-inspired debut record Infinite Worlds in 2017, she has officially stepped out of her comfort zone with her self-titled sophomore project.

The 10-track project, Vagabon, released in October, is filled with disco-infused highs and moments of quiet introspection. The feat was Tamko's first attempt at producing an entire project from start to finish, a process that helped her discover the true extent of her vocal range. Tamko's not calling it a rebranding — on her self-titled record, she's simply presenting a more fleshed out version of herself as an artist. Vagabon has been more fully formed, though Tamko points out she's not yet reached her final form.

Below, NYLON caught up with Tamko in the midst of her tour with Angel Olsen talk about the inspiration behind Vagabon, and how taking on new creative control has affected her approach to songwriting.

What was it like to produce your own project from start to finish?

It was stressful and rewarding at the same time. I played the strings, I did play the horn; I didn't engineer every single thing on the record, but the majority of the songs and how they came to be were conceptualized in my bedroom and produced by me. Whether it's me curating an incredible string section or the string arranger, Oliver Hill, coming in to bring these ideas of mine to life through his arrangement, it kind of became me in the driver's seat. Most of the time I was at the computer, and sometimes I delegated to a very trusted, select group of people for additional things that I don't know how to do.

Did the experience make you want to continue producing your own work in the future?

I don't think so. It's very stressful and time consuming. Collaboration is a beautiful thing, and for me it was really important for my first two records to be exactly what I wanted them to be. I don't really have the personality of someone who's ever going to take a backseat and let someone just do something with my music, but I have been thinking that at least not doing everything I did on the last record would be a nice rest, and I could focus on other parts of my musicianship to get better at.

Overall on the album, it really feels like you found your voice — how did this new vocal experimentation come about?

What was really coming most comfortably for me were melodies. I kind of walk around singing all the time, having more fun with melodies and having more fun with what I can do with the range of my voice. On previous records, I've been pretty afraid of how deep my voice could be, and on this record, I was like, I get deep and I can go high and I can find a way to use these things and be comfortable with this instrument that I'm just now learning to love.

You change the title of the album a few times before landing on your self-titled record. Do you see the project being a representation of you as an artist?

I feel like it makes a lot of sense that it's self-titled. When I look at the album cover now and I just see Vagabon on it, nothing else, it feels kismet.

Now that you've been performing these songs on the road, has your relationship with the music changed in any way?

I know that people loved "Water Me Down," but I think I've been surprised by how many people at these shows with Angel Olsen are singing and dancing along with it. It's really cool — especially because we are in a 24-hour news cycle — for people to already have a relationship with that song, enough to come to a show where I'm the "special guest" and for them to know the words. That has been really, really special. Songs like "Secret Medicine" and "In A Bind" I'm playing every night, and they feel really lovely, and I noticed that people are, for the most part, very quiet when those songs are happening. That's just really cool to see.

What did you learn about yourself and about your creative process through making this album and releasing it?

Tell me about the inspiration and process behind "In A Bind" — it's so intimate, you almost feel like you're sitting in the room with you performing when you listen to the recording.

The guitar for that song was recorded by my friend in his bedroom in New York City, and you can hear the chair creak, and I really wanted to keep that, because that guitar part is quite hard to play. I kind of had that guitar part in my head for the last three years and didn't know how to use it. That song is something that I really struggled with arranging, because it is so different in instrumentation than the other songs. I wanted to have this specific choir that I kind of grew up listening to at a church in Harlem, New York. And for some reason, I wasn't able to get that arranged, so I had my friend Taylor Simone come in and be a one-person choir. She sang all these different harmonies, and I picked which ones worked with the choir piece that I wanted to have, and then it happened.

What do you hope your fans take away from listening to this album?

I hope that they want to dance, I hope they want to move, I hope it makes them feel seen and happy, and ultimately, I wanted to speak to people. I just want to build a community around my records and for people to congregate over them, whether it's for dancing or for crying or whatever.