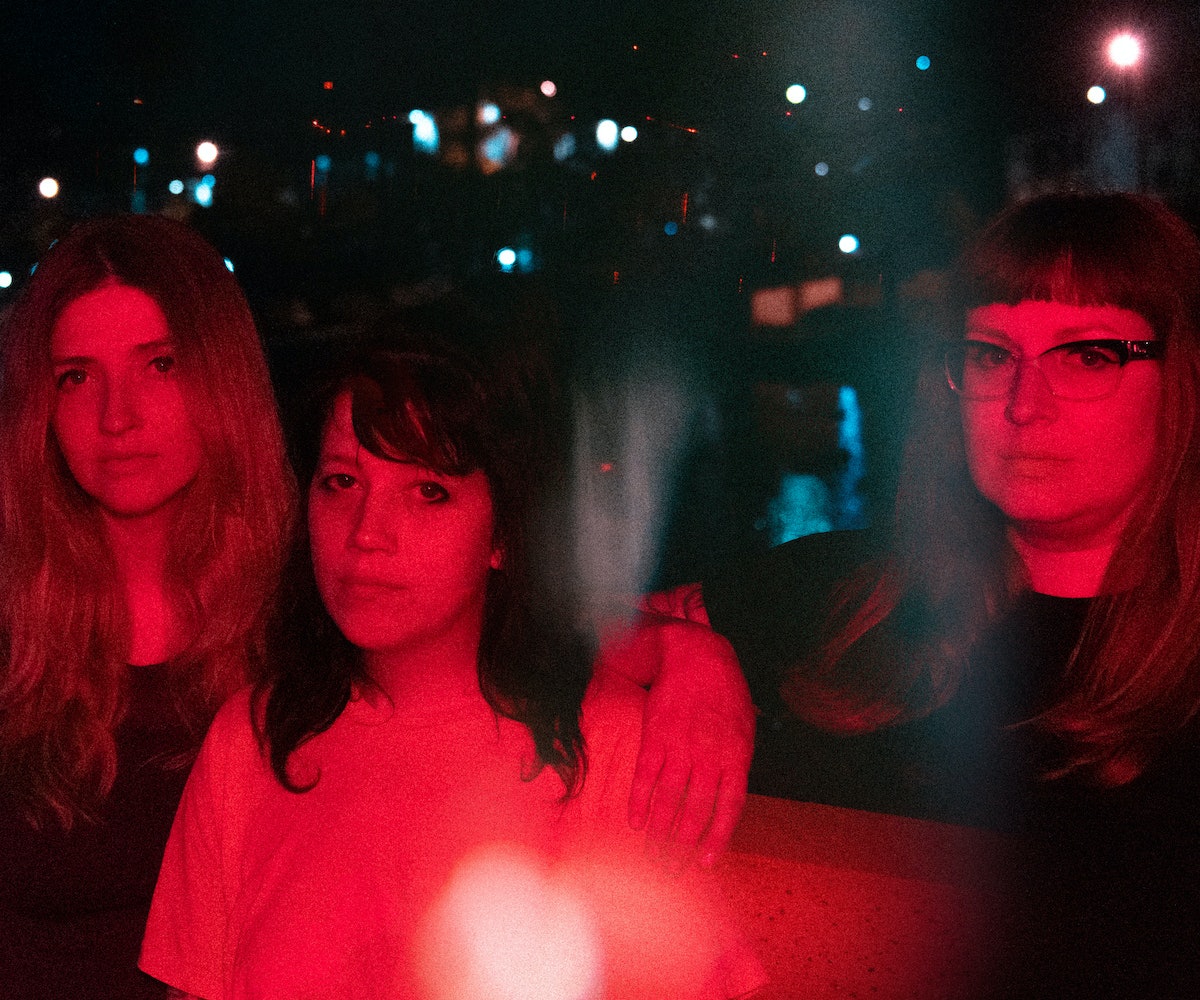 The reunion of the Vivian Girls feels like the answer to the prayers of indie rock fans everywhere. Since their initial break-up in 2014—which was three years after they released their last album, Share the Joy—their fans realized the impact of what they had lost. The aching gap led to essays,written in retrospect, acknowledging what the group's presence meant to a toxic male-dominated indie scene. Hell, they were even the subject of a lesson in a course on punk music I took in college.

But the Vivian Girls didn't totally know the extent to which they were missed in the scene. Guitarist and vocalist Cassie Ramone told me over the phone just this past week, "I haven't read viral press in years—I'm out of touch with all that shit." The band, though, didn't get back together for the press, even though, as bassist Katy Goodman said, "Of course, it's nice when people write an article about, like, 'oh, we missed the Vivian Girls,' I'm like, We miss you too." The same reason they'd left the music scene was ultimately why they returned: It just felt right. Drummer Ali Koehler, who had left the band pre-breakup in 2010, was ready to rejoin the group as well, and so everything really fell into place. That is, after Ramone up and moved across the country to reunite geographically with the band too.

Ahead of the release of Memory, we talked with the Vivian Girls about getting back in the studio, back on the road, and the future of the band. Read the full Q&A below.

What made this the right time to get the band back together?

Katy Goodman: It had just been long enough and I was already starting to feel like, Hey, I would totally do that again. Vivian Girls was really fun. I missed playing with Cassie and Ali. I wondered if they'd be interested in doing it again. And so I called Cassie and she was like, "Yeah, I'm also interested." And then we called Ali... So it was actually very simple and easy.

Cassie Ramone: This was like November 2017. I was getting coffee in Brooklyn. Katy called me and I was like, What? Like, Hello, Katy wants to do Vivian Girls again? That's crazy... I was stoked. And then I was like, Okay, I guess I'm going to move to L.A. All right. Let me figure this out. And then I just did it. And I moved to L.A. like four months later.

Ali Koehler: I don't remember when Katy asked me, I'm guessing probably shortly after that. And yeah, I was down. I also knew that I was going to try to have a baby but it was like, Whatever. I'll figure it out. People have done crazier things. And luckily it worked.

How is it working and writing together again as a group?

CR: It was really easy and natural, actually. I was anxious about it before I moved, because it was a huge life change, moving all the way across the country just to do this. I was definitely having anxiety about, like, Will this be weird? Will too much time have passed? Does it not feel right? But it was just really natural and easy and awesome and it worked like it used to.

AK: I agree. It was, I kind of went into it trying not to have any expectations, just to see how it went and it was pretty seamless from day one.

What do you want fans new and old to get out of the album?

CR: I would say, if you enjoyed Vivian Girls back in the day, you're going to enjoy this too. We're the same band. We're [making] aggressively and emotionally charged music, and we're playing it aggressively. So if that's what you liked about us, then you will be very stoked to hear our new record.

What artists have you guys been listening to a lot lately that either influenced the record or maybe gave you a renewed energy in returning to music?

AK: From like a drums perspective, we communicated what the vibe we were going for with each song... Cassie would send a musical mood board for things. And on that was My Bloody Valentine, Elliot Smith, old R.E.M., and Beach House. I feel that kind of made its way into the subconscious of the album.

CR: Totally. I was on a huge Beach House kick last year; I still kind of am. And I like the same old shit, like The Wipers and Elliot Smith and Bert Bacharach [are] always an influence.

KG: For this record I mostly was just like, What comes naturally to me here? And I've always kind of stuck with that throughout all of the Vivian Girls records. I've never really reached out for specific influences here and there. I just like play what comes to me and feels good. But I agree with all their influence.

AK: I remember when we were like working on the new songs, in the beginning Katy was having a hard time coming up with something [on a song]. And she came up with a really incredible melodic bass line and I remember thinking in my head, There she is.

How long did the album take to write?

CR: About a third of the songs on the album, I wrote a while ago, like three to five years ago. And then the other two thirds I wrote the first two weeks I lived in L.A. I was living in Burbank when I first moved here. I would just get Trader Joe's wine and sit out in the backyard of where I was living with an acoustic guitar, and just drink Trader Joe's wine and write music all day. I think moving to a new place, it was really inspiring to me. Everything being new and different. I hadn't really been writing much before, in the past few years before that, just because I was in a weird place in my life. So I feel like there was all of this [emotion] that was pent up and it was very therapeutic.

What did you learn about yourself in the process of making this record?

CR: Well, I was kind of in a rut for a few years back in Brooklyn. And I think writing the remaining songs off the album really helped me put a lot things in perspective.

AK: Going in the studio and coming up with these songs was really empowering, because I don't love going in the studio. And I had to get down on myself and what I'm capable of... I learned to kind of trust my instincts and also believe in myself more. And also, I felt like I came out of writing—working out the songs and recording with these guys—feeling more sure of myself.

Social media has kind of grown and changed rapidly since you'd broken up and come back. Going back into this, do you have any predetermined way for yourself to manage that, in terms of self care?

CR: Back in the day, I was obsessed with looking up Vivian Girls reviews just because I needed to know what was being said about me everywhere—just in case. But it took such a toll on my self-esteem, and that's why I just quit reading about myself online. I think it's the best thing I've ever done for myself. I would recommend that to every public figure. The only things that I really read are things that people tag me in, which are always positive. Who the fuck would tag somebody with something negative unless they're a total psycho?

AK: I think Cassie's approach is probably the healthiest and the best, and that's the approach I should adopt. But my curiosity gets the best of me. But for the most part, [reactions on social media] have been overwhelmingly positive, which is nice but also dangerous. That means I'm going to want to read it more because it gives me a boost. And then if I inevitably see something that's not favorable, then I'm taken down a peg. I should probably get out of that cycle.

KG: I agree with you Ali. I get tricked by how much positive stuff there is where I feel safe. I'm like, Oh, the Internet is a safe place full of praise and then all of a sudden you're like, Bam. No, it's not. Back in 2009, we definitely viewed the Internet as not being a place where we could find only positive things.

AK: We came up with the Internet and it was very much more the Wild West when we were younger, and that's exactly what I expected of the Internet.

What does the ideal future for the Vivian Girls look like right now? Do you have plans for after the album release?

KG: We just want to be a band again. Like, doing okay. This is not just a reunion tour. We're basically trying to pick up where we left off. New music, new stuff. Making more records, playing more shows, just doing our thing. Just being a band.

Are you excited to go back on the road?

KG: Kind of. But also like.... I'm so used to my routine at home now that it's going to be pretty jarring to like be away from that. So we'll see. I'll let you know in November [how it goes]. The only shows that I've played in the last several years have been pretty small low key shows. So I have no idea what it's going to be like, but I'm excited. I'm looking forward to it.