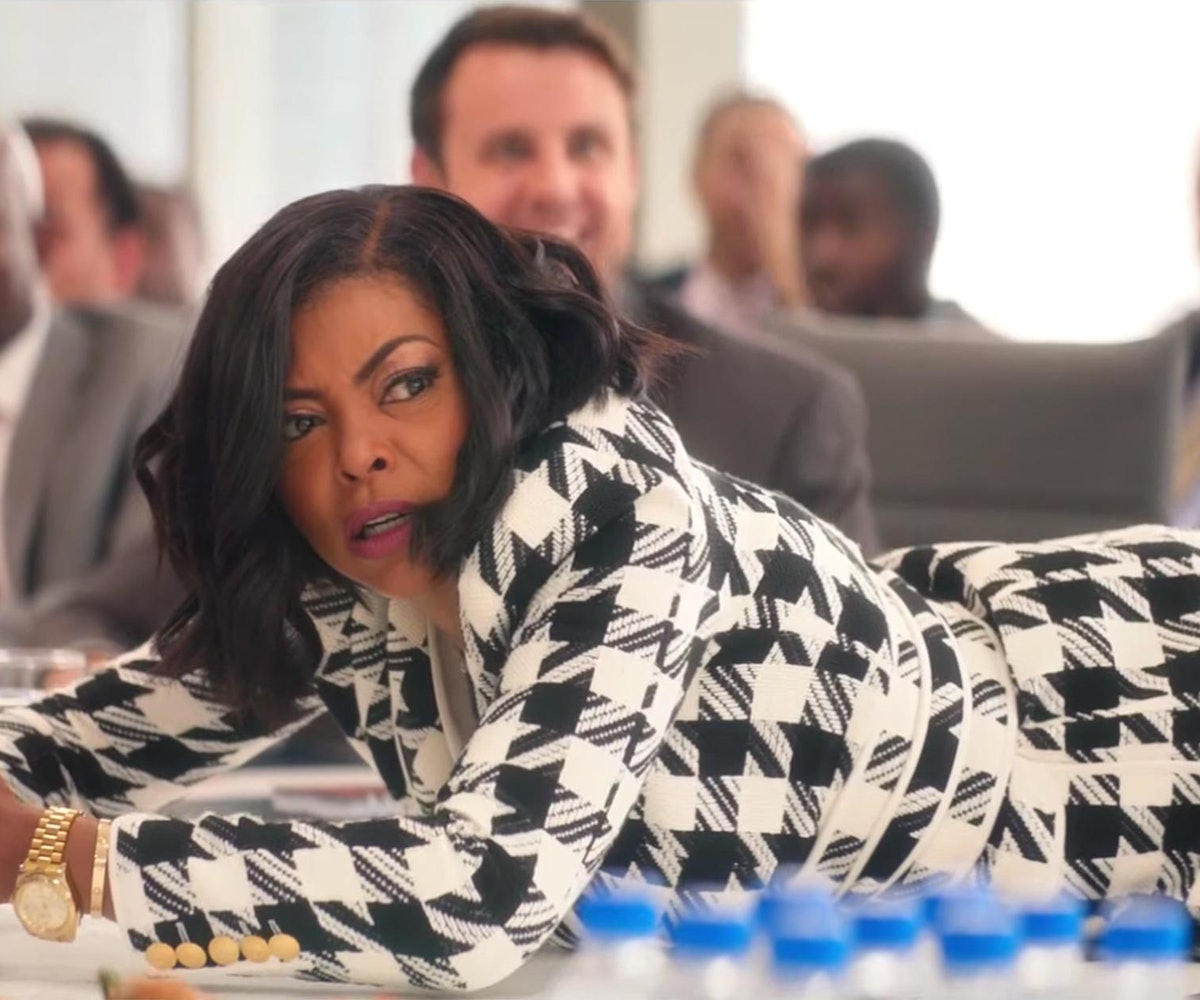 Imagine waking up with the ability to hear the inner thoughts of men. Do you think that you'd finish the day enlightened? If you got to the core of the things that men usually keep to themselves, would you be better equipped to bridge the gender wage gap? Or maybe you could put an end to sexism once and a for all? What Men Want—a loose adaptation of the 2000 Mel Gibson rom-com, What Women Want, brought to us by the powers that be in Black Hollywood including actress Taraji P. Henson, Will Packer's production company, screenwriter Tina Gordon, and BET Films—explored these questions. And while the effort made for an arguably good time in the movie theater (the soundtrack alone is worth the rising costs of movie tickets), Henson's adventures as male telepath and sports agent Ali only proved two things: (a) What men want privately is the same thing they want publicly and (b) What men want isn't nearly as important as what men have, which is systemic power and an arsenal of codes and tools to keep women from getting it for themselves.

Ali's life isn't much different than that of any powerful Black woman surrounded by equally powerful men. She works just as hard as men do, she makes just as much money for the company (oftentimes more) as men do, and she's figured out how to maneuver through their crass bravado to get the job done. But she's repeatedly passed over for promotions, and never reaping the benefits of all her work. Her boss (Brian Bosworth) thinks she should stick to what she does best—work with other women—and stay in her lane rather than try and get the more lucrative male contracts. But, taking a page out of Beyoncé's book, Ali decides that the best revenge against her firm's old boys club is success. She sets her sights on signing the number one NBA draft pick, Jamal (Shane Paul McGhie), a feat that will require her to get his eclectic, overbearing "fathager," Dolla (Tracy Morgan), to trust her. Then, Ali gets what she assumes is a leg up when some funky tea and a nasty fall give her the sudden supernatural ability to hear men's inner thoughts.

But was it much of an advantage? I kept waiting for the moment when Ali's new skill would be anything but funny and weird. I anticipated an insightful moment in which Ali tapped into some tender part of masculinity that isn't spoken about. That never came. Mostly, Ali and viewers received further confirmation of how horny, insecure, and stupid men are. What she does learn is that her best friend Mari's (Tamala Jones) fiancé is cheating. Her other friend Ciarra's (Phoebe Robinson) husband is, too—with men. And, Ali learns how to be a better sexual partner with her boo Will (Aldis Hodge). Saving your homegirls from fuckbois and acknowledging your partner's sexual desires are important personal achievements, but they don't do much to right systemic economic injustice. Because, professionally, Ali still comes up short, even with a superpower. Her sudden, intimate insight into what men literally think about gives her perspective, but it doesn't wield her any power. Does it really matter if women know what men want if male privilege means that they're primed to come out on top anyway?

The most substantive nuggets that Ali picks up are logistical. She knows the local basketball court where Jamal likes to go to clear his head. She learns the date and time of the next secret poker game that her male colleagues have gaslit her to think doesn't even exist. Dolla will be there. These are the kind of logistics that a little bit of snooping over an assistant's shoulder or on a Twitter feed could have helped her with if she tried. Knowledge that these things exist can't end the structural mistreatment of women in the workplace. In the real world, showing up without warning to her male colleague's home to play poker could have easily gotten her reprimanded or fired. You have to be invited to have a seat at most men's tables. And Ali wants desperately to be invited, but that offer is not forthcoming.

The thing is, no woman actually needs to be taught that the male ego is fragile and in constant need of validation; nor is it surprising that men value women more when they are somehow bound to a man. What Ali's boss and friends actually mean when they say she doesn't connect well with men is that she doesn't properly play her role as a woman. Even before she gains a sixth sense, Ali is extremely well-versed in men, their desires, and their codes of communication. Perhaps too well-versed. By rolling with the punches and keeping the same energy as her male peers, Ali is considered less ladylike, less amicable, and hard to work with. Her power and unwillingness to acquiesce to the will of the guys around her are the only things stopping her from accessing leadership positions. For better or for worse, Ali already knows what men want, at least of her. They want her to stay in her place.

This is why (major spoiler ahead) her happily ever comes in the form of her quitting her job to start a firm of her own. What Men Want doesn't offer a revolutionary scene in which Ali dismantles the gendered hierarchy in corporate America, because it can't do that, not as long as male privilege exists. And that's not exactly a revelation so much as it is an acceptance of the status quo, with rebellion being not a rejection of these institutions but the decision to build your own, parallel version of what's already in place. All to say, there is no benefit to reading men's minds if we can't change their minds or take away their power.