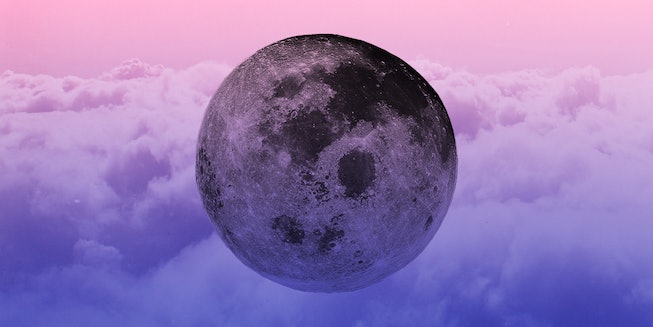 December's full moon will be in Cancer, in decan one, which is the most Cancer of Cancers. And, as you might know, the sign of Cancer is ruled by the Earth's moon, which makes this December's full moon a real crabfest. What's this Moon-o-rama gonna look like for us unsuspecting Earth folks? As if "the holidays" weren't hard enough, what with the homophobic uncles and the creepy cousin who keeps looking at you funny, now you've got the most sensitive planet dipped in the most empathic sign taking up your whole night sky. Get ready to spread your feelings around like butter on biscuits and salt them with your tears. But, what else is new on the weekend right before Christmas, when all final deadlines are to be met and gift-guilt drags us out to fluorescent four-storied hell malls? As many a grandmother might say should you ask them, "There's nothing new under the sun."

But, what about that moon and how juicy it is? Is there anything new under a moon like that?

Tonight, I'm thinking about persimmons. I'm thinking about how just last week I went to the grocery store with my friend, and there were no persimmons in the fruit aisle, and my heart sank. I didn't tell my friend about it because what could I say? "I was hoping there'd be persimmons so that I could buy some and leave them to ripen on my windowsill until they were more jelly than fruit. Then, I would eat them, although I don't like them very much. I would think of my father, who loved persimmons, dark chocolate, and me"? No, I couldn't say all that. I just went on, collecting other meaningless fruit in my basket, moving on to the dry goods aisle.

Now I'm at home reading an old poem by Li-Young Lee about persimmons and his father, and I think this must be some immigrant curse, some quiet grief only certain moon children ferry in their hearts:

This is persimmons, Father…

...Some things never leave a person:

scent of the hair of one you love,

the texture of persimmons,

in your palm, the ripe weight.

The ripe weight, yes, I'm imagining our last full moon of the year as a fruit in the sky "heavy as sadness, and sweet as love." A moon ruled by Cancer is a moon in her full emotional power, pouring out all her light like a consecration. Who does she bless if not herself? To feel it all, to take stock of a year that almost killed her, to recognize the many who were killed this year—to see herself as one of the lucky ones when she has never known herself to be lucky. A moon ruled by Cancer is a moon ruled by herself, by her own tides and her own waves. A full moon in Cancer, occurring alongside the winter solstice, has so much to teach us about tending to the depth of our darkness and nurturing the vulnerable seeds we've placed there back when we had possibility thrumming in our hearts.

In the dark of the cosmos, we find that the moon lights up a sky where Venus is graced by the devotion of Scorpio. Jupiter and Mercury brush against each other in worldly Sagittarius, and Mars keeps his cards close to his chest in secretive Pisces—with Chiron kicking up painful reminders. The dark nights ahead will call us to sit at a table that we had long ago thought we were done eating from. The winter solstice will ask us what grievance we're willing to release in exchange for gratitude: that some of us get to sit and break bread with each other, that some us are well enough to take that bread to our lips and call it sustenance. Let the full moon prepare you for that luminous work of accountability, let it remind you of all the people you've forgiven without conditions—how, amongst them, no one deserved your forgiveness more than you.