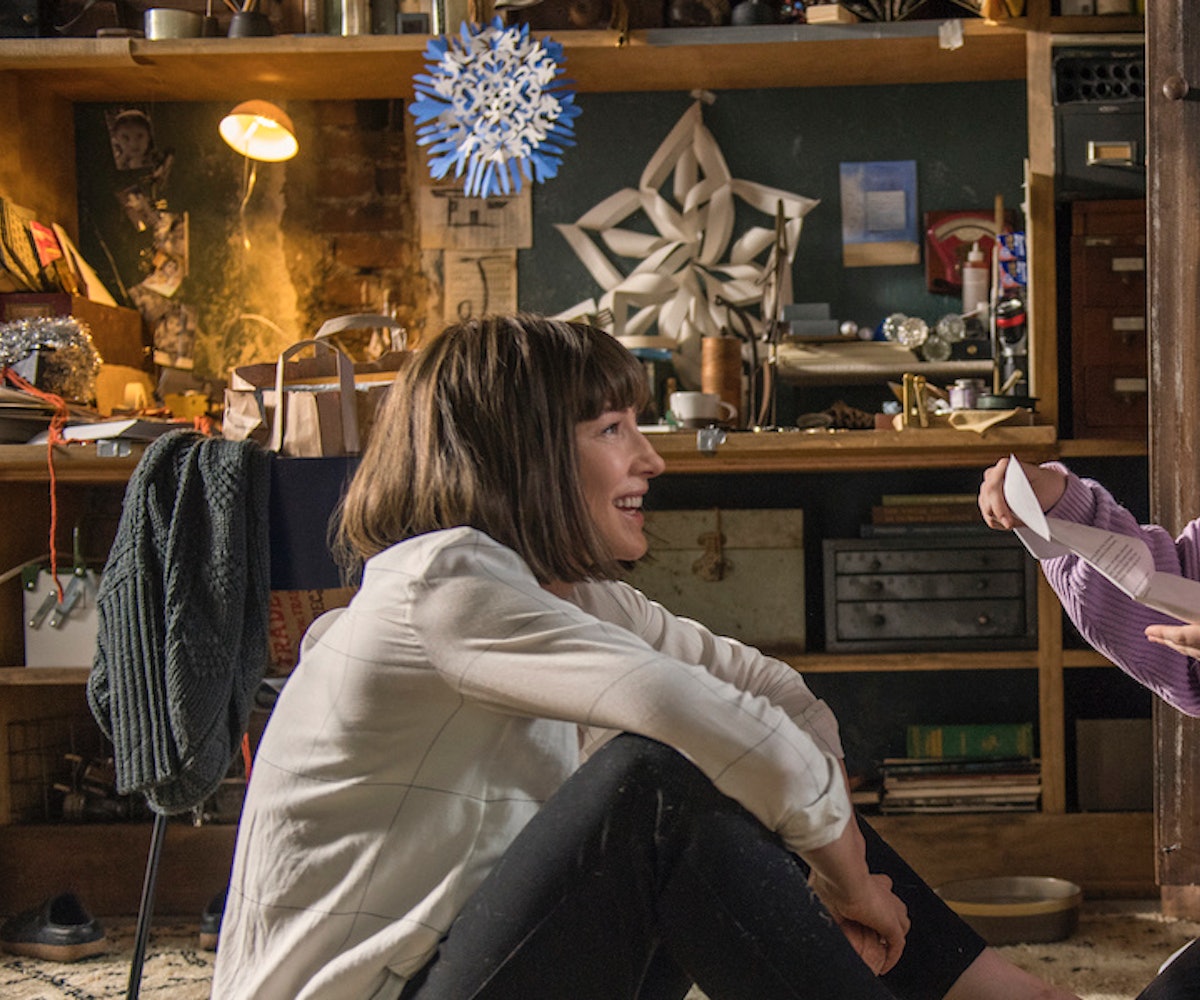 Before you learn anything concrete about Bernadette (Cate Blanchett), the titular character of Richard Linklater's film adaptation of Maria Semple's novel, Where'd You Go, Bernadette, you feel like you know her, because you've seen inside her home. And what a home it is: The roof is leaking, the paint is chipped, one room seems to exist for the sole purpose of housing haphazard piles of Amazon boxes. When we see Bernadette cut a hole in her floral rug to give the plant growing underneath it more room to grow, some may cringe. In short, it's a mess—which is what we soon find out is the best word to describe Bernadette, too.

A once-celebrated, now-reluctantly retired architect, Bernadette has moved from L.A. to Seattle for her husband's tech job, and is a devoted mother to her daughter, Bee, albeit otherwise a recluse—even to her husband; it's clear her problems stem in part from creative frustrations.

"I do think that any creative talent, when either squashed or diverted or even put into hibernation, can start to fester in someone's psyche and soul, if not allowed to flourish. And that's what happened to Bernadette," says Beauchamp Fontaine, the film's set decorator. "While she made the choice on her own and willingly—especially to have the child and for her husband—by not creating, she developed such an inward-focused life that it became unhealthy. I loved the fact that we then got to demonstrate that in the house that they bought, and that she had these great hopes of turning into another architectural masterpiece."

While the house does exhibit an abundance of wear and tear—a seeming metaphor for a beaten-down Bernadette—Fontaine made sure that Bernadette's hope for something more came through in the decor. "That creative force within her kept burbling to the surface... The only part that she kept up with—she couldn't suppress, I suppose—were in these little fantastical, whimsical projects that she would do around the house that was drafty and cold and had leaks and wasn't really functioning to most people," Fontaine says. "If you were in their little intimate insular world, you would see how loving and focused Bernadette was on her daughter. I tried to bring that vision quite clearly to the screen."

The "projects" involve intricate snowflakes left in Bernadette's office that, Fontaine hopes, people "imagine that she had worked on with her daughter." Other glimpses include installations of intricately folded books (by Kyle Ethan Fischer) that resemble flowers and beautiful architectural woven yarn (by Jennifer Marks) adorning stairwells."I think, as a child, if you were to come home, the yarn would seem like a troop of fairies had descended in your absence and created this beautiful thing. But if you were the husband coming home, and the place is still a mess and she hasn't even called the roofer—things that you wouldn't think take a lot of energy—I can imagine that put strain on the marriage as loosely as we see that it does in the book and in our script."

Not only did Fontaine want to show a "shell of Bernadette's former self," but also offer "a glimpse into the high-functioning Bernadette" who would have wanted to decorate her home with design-forward furniture and bold pieces, like the Power Play chairs and a deep blue mohair sofa that we see in the house. "I thought someone who had won a MacArthur Fellowship [as Bernadette did] would be not only highly regarded, but have unparalleled access to furniture and any bespoke architectural components that they wanted," she says. "If the phone rang, and it was she on the line, [any designer] would be beyond flattered and thrilled that she would want to decorate her own home with their pieces. I made sure that I indicated that taste level and that access through her home choice to balance out the fact that she had once been very high-functioning and applauded in the architectural design world."

Given that the film was shot in Pittsburgh, which, according to Fontaine, is a "dynamic city that is just burgeoning with young creative talent," she "took advantage of going to small art galleries" for some of the pieces featured on set. "Like in the bathroom, I had this handmade stool that I thought was one of the prettiest things I've ever seen. I knew that she had the financial ease to purchase whatever she wanted." And while Fontaine is correct in that Bernadette is portrayed both in the book and film as someone with financial means, she also wanted to make sure that her surroundings didn't suggest that she was a careless consumer, especially as she is seen in the film ordering boxes and boxes of items for the family trip for Antarctica. "She does become a hyper-consumer at that point in her story, and starts to stockpile stuff. But in her life before this, before this crisis of her daughter getting ready to leave for boarding school, she hasn't been," says Fontaine. "I definitely wanted to balance that. She's not a hyper-consumer in a gross way. I think that, especially in her home choices, her selections are very considered."

Even the office that, at first glance, appears to be bursting with objects was put together with a lot of thought by Fontaine and buyer Caryn Marcus. "I wanted it to be full of nooks and crannies of beautiful things that she would've collected, just as one does. If you go to an architectural salvage yard, and you find some beautiful glass knobs, you'll go, Oh, I'll put these on some doors, and these can replace these ugly Home Depot ones. I'm going to get around to doing that," she says. "As an architect, she's not going to have a pair of scissors, she's going to have an absolutely beautiful pair of scissors with brass handles, that kind of thing. I just kept creating vignettes that I felt were dense visually, but everything in those vignettes was well-considered during that movie."

While most of the rooms in the house exhibit "elements of decay"—which Fontaine thinks Bernadette would have found beauty in—Bernadette's bedroom is in stark contrast to the rest of the house with modern decor, beautiful detailing, and brass bullet sconces by DCW Editions. It's a room that Fontaine imagined Bernadette would have started working on upon first moving, before the emotional setbacks. "You want your bedroom to be your sanctuary. I kind of felt, again, that it was time to use the look of the room to tell the story of this breakdown from high-functioning architect to mono-focused mother without her other outlet," she says. "Her bedroom has some really exquisite fixtures and bedding. I kept it very sleek and minimalistic. I just wanted the viewer to be able to see that she did very much still have that in her, the ability for those choices." Fun fact: According to Fontaine, "Cate Blanchett bought pretty much all of the elements that I was most excited by at the end of the film."

As with all projects, Fontaine wanted to make sure to approach it with care and look into the history of the space. A former school for girls in the book, Bernadette's home notably contains a chapel office and a room with a beautifully faded mural of a saint (that also winks to the Saint Bernadette plot point that comes up in the film).

"I felt that when they bought the house, there would've been some things leftover that she recognized were really good pieces from the time and that she could very skillfully marry worlds of her very contemporary taste with what she had now," Fontaine says. "I got a lot of Victorian light fixtures, but then I would go crazy and get these exquisite area rugs from New York, and a Swedish rug that was just to die for."

One of the best examples of that, and the most striking rooms in Bernadette's house, is the living room with a stunning coffee table that holds titles that Fontaine carefully selected to display (I spotted an Ed Ruscha book during the intervention scene) and a boldly patterned pink wallpaper by Adelphi.

"When I did the research and found out about Adelphi—I knew of Adelphi, but I looked onto their site to see what would've been appropriate that somebody actually could've had in that home that she inherited... what she would've kept. I think she would've loved that wallpaper and kept it," she says. "I tried my best to make sure everything looked like it was very cohesive and worked together even though, when you look at them individually, you think that they were such disparate elements. But when you marry them together, they have a very visually cohesive look in the film."

And, if this isn't a metaphor for Bernadette's life, I don't know what is.

Where'd You Go, Bernadette is out in theaters today.