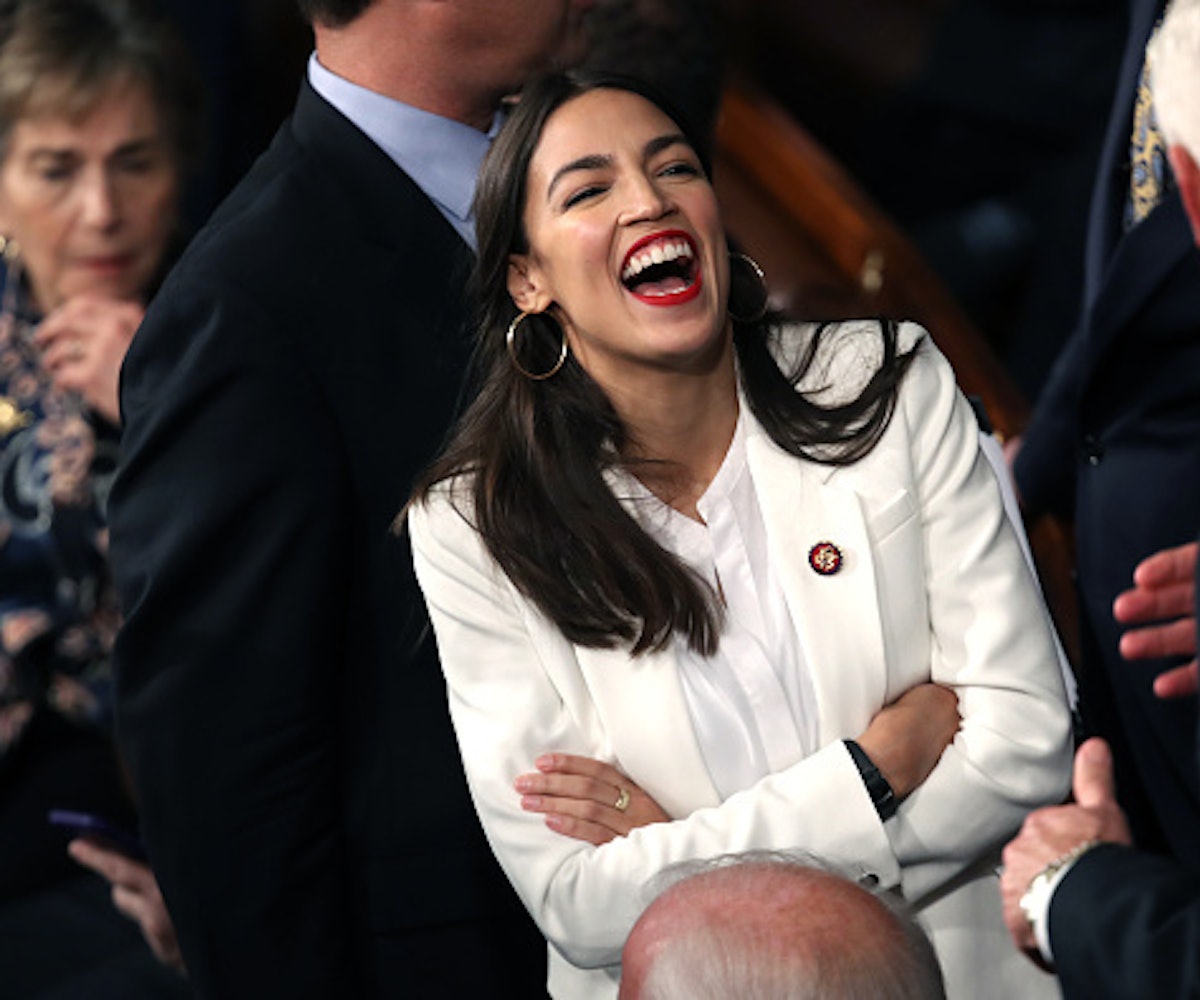 "THEY ARE NOT CORNY ANYMORE," wrote Representative Alexandria Ocasio-Cortez in her Instagram Stories; she was talking about her press-on nails. It was just after midnight on Monday morning, and Ocasio-Cortez was giving herself an ad hoc manicure as she rode the Amtrak to Washington, D.C.; she was preemptively defending her nail choices, and offering even more helpful press-on tips: "Carry a little nail glue in your purse and keep the spares. If one breaks or falls off, you can fix it on the spot."

It was a small moment, this train manicure, but it's a notable one for being precisely the kind of endearing peek into Ocasio-Cortez's life that drives her opponents into a sputtering rage, the type that leaves them apoplectic, fuming, How dare she? Their ire has been, in recent weeks, provoked by everything from the revelation that her high school nickname was Sandy, to the sort of clothes she wears, to the fact that she's honest about not being able to easily afford rent in two of the most expensive housing markets in the country, to the release of a decade-old video of Ocasio-Cortez dancing with her friends.

At first glance, it seems like these petty grievances are indicative of her opponents' collective impotence; they are forced to complain about the apolitical issues, because it is too early in Ocasio-Cortez's congressional tenure to have anything substantive about which to complain. And yet, the furor surrounding these innocuous moments has revealed the depths to which Ocasio-Cortez's opponents will sink to denigrate her, and just what it is that Ocasio-Cortez's presence—on Instagram and on Twitter, yes, but also, of course, in Congress—threatens: everything.

As an institution, Congress is old and rich, with a net worth over five times the U.S. median. This is not a Republican problem; prior to the 2018 midterm elections, Democratic representatives were just as old and wealthy as (when not older and wealthier than) their across-the-aisle counterparts. Last November, though, signified a changing of the guard, and an influx of younger, more progressive representatives to the legislature. Of them, Ocasio-Cortez is undoubtedly the most visible of these, but there's also Lauren Underwood, Ayanna Pressley, Rashida Tlaib, and Ilhan Omar who are working to effect real change, the kind of change that promises to destabilize, to afflict the comfortable, no matter on what side of the aisle they stand.

This, then, is why Ocasio-Cortez has provoked fear amongst Republicans and establishment Democrats alike; her willingness to be called "radical," refusal to shy away from socialism, and resistance toward the still dominant narrative that capitalism is working in this country, makes these establishment figures quake with fear. But perhaps most important among Ocasio-Cortez's traits, and what her opponents are most afraid of, is that Ocasio-Cortez isn't afraid of them. And this is something they're not used to dealing with, particularly when the object of their anger is a young woman of color, precisely the kind of person whom those in power are inclined to intimidate successfully.

And so they've tried to intimidate Ocasio-Cortez, using a tried-and-true playbook of othering her, hoping to marginalize her permanently. This is why so many of the attacks against Ocasio-Cortez are designed to remind the American people of the ways in which Ocasio-Cortez is different from what we've grown to expect of members of our government. In much the same manner that The Atlantic's Adam Serwer wrote of President Trump and his supporters that "the cruelty is the point" when it comes to their inhumane policies, when it comes to the way Ocasio-Cortez is attacked, the misogyny is the point—as are the classism and racism. The attacks on Ocasio-Cortez are designed to belittle her, to remind others of the fact that it isn't simply that Ocasio-Cortez is different than the establishment, but rather that she is different from the populace; she is not who anyone should want to be their leader.

But these attacks have, again and again, backfired. In part, this is because the controversies they've purported to reveal are so banal; who really cares about someone's high school nickname or the videos they made with their college friends? More than that, though, Ocasio-Cortez has proven that she doesn't care. She's more than willing to address these non-scandals head-on; she's not afraid of them, because she knows that any power that exists in the hands of these politicians is ephemeral, and contingent on perpetuating the oppression of people exactly like her in order to exist.

And Ocasio-Cortez has no time for this. She has no interest in playing into their hands and addressing their complaints as if they're serious, instead of spurious. (Ocasio-Cortez will not be taking any DNA tests.) She will not be pressured into bipartisanship when that would mean collaborating with the white supremacists—whether avowed or more discreet—who comprise the Republican party. Ocasio-Cortez will not be afraid of the people who have long resorted to instilling fear in constituents, since they had no hope of earning their respect. Instead, now, those same people, aware that their grip on power is more tenuous than it has been in centuries, are afraid of her, and what she represents: a future in which they will be obsolete, a future which is long overdue.

Of course, this future is not predestined, there will be many battles fought, and legislative victories that need to be won (perhaps starting with that 70 percent tax rate on incomes of over $10 million?). It won't be easy, but what's crystal clear is that Ocasio-Cortez is more than up for the fight. And if she breaks a nail in the process? It's cool. She knows how to fix it on the spot.