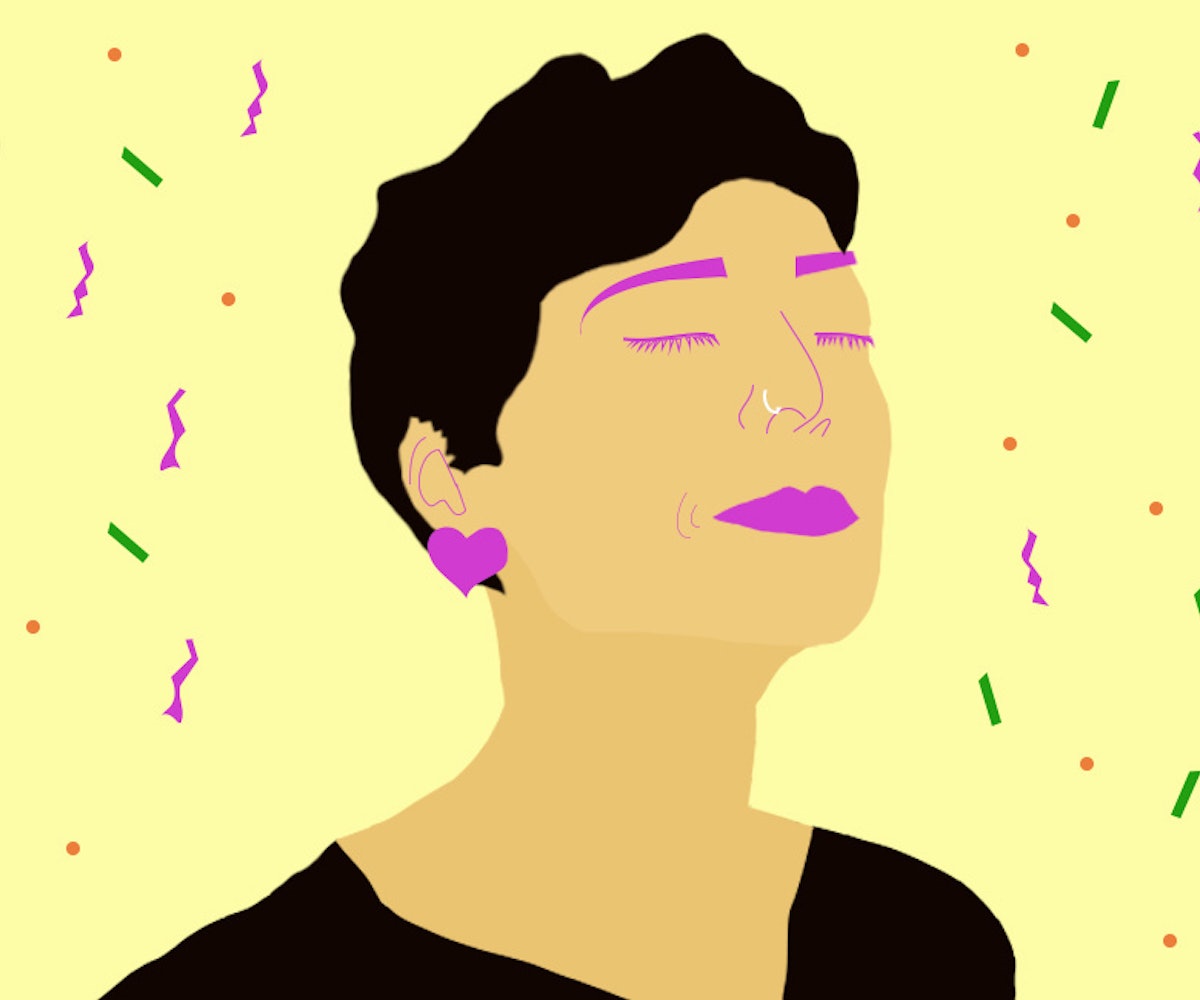 I was 22 when I first started going to therapy. Wait, that's not true—the first time I went to therapy, I was six years; though, during those few sessions, I thought my parents were sending me to chill with a cool older lady named Harriet. When I was a teenager, I found out Harriet was actually an anger management therapist. So, I guess you could say I've struggled with my mental health nearly my whole life. But it wasn't until my early 20s that I decided to take control of it.

It was serendipitous, the timing of it all; I felt cataclysmically unsettled, so anxious I could barely keep food down. I was losing weight, losing interest in my work, and losing my mind. I went to the first therapist I was recommended, by an acquaintance, and that therapist happened to specialize in LGBTQ mental health. A few months in, I realized that I personally was struggling with LGBTQ mental health… as in, I was excruciatingly gay, and very repressed.

After about two years, I stopped going—mostly because I was abruptly laid off from a job, and I could no longer afford it. But I also felt like I was healed. I was happily dating my first girlfriend, had come out to my friends and family, and was working at a new job that was way better suited for my mental health. I lost sight of something that's easy to lose sight of as an anxious person: Mental health is something to be maintained, like your physical health or your skin-care routine, not something you can solve.

In the absence of therapy, I've tried many methods of allaying my anxiety: I've seen numerous psychiatrists and tried different medications, but the meds didn't work out for me—though they do for so many people. I've tried bougie hot yoga classes, which are fun and absolutely does bring me peace, but also are expensive and therefore difficult to maintain. I've tried being a gym rat and obsessively swimming laps at 24-Hour Fitness, garnering stares from sweaty old men and dudes who read the writing on my T-shirts back to me ("'Disobedience.' Are you a rebel or something?" No, it's a lesbian movie—keep walking, random man).

However, these bursts of activities or remedies have always been reactive rather than proactive, as in, when I've had swells of anxiety and depression for a few months, I try to find a new way to help myself. It can feel almost as if I'm bingeing on self-care, and as soon as I find peace of mind, I'm like, Boom. Solved! And then... I revert to not taking care of myself.

Over the last year, I've said the words, "I want to go back to therapy" so many times, I've lost count. And in the three years since I stopped going, I've experienced more toxic dating trauma than I ever thought I would—stuff I knew I needed to work through and talk about in order to move past it—like, you know, falling in love with someone who was openly emotionally abusive, fear of commitment after multiple rejections, fear of letting myself get anywhere close to saying "I love you" to someone again, good ole trust issues.

So much of my anxiety is rooted in a core of "what-ifs" that developed after I pursued toxic relationships, I used to feel like I'd never be able to be in a relationship and maintain my mental health, because that's how it felt while dating my exes. As it turns out, I was actually just engaging in relationships that chipped away at my mental health. I thought it was the opposite—that my brain was so broken that I wasn't capable of existing with a partner without spiraling constantly. But actually, my fears and anxieties were a direct result of trauma, a defense system I had built. The relationships were the issue. Not my brain or my capacity to love.

That said, I wasn't financially able to go back to therapy when I needed to. I'm a freelancer, which means I'm lucky if I can get paid in time to cover my rent, let alone worrying about ancillary costs. But therapy shouldn't be considered an ancillary cost, because it's a primary need. And yet, I've made every excuse imaginable as to why I couldn't go back to therapy: I was "healed"; I couldn't afford it, this isn't an excuse but rather a devastating and common reality; maybe I could eschew the need for therapy with medication, or replace it with compulsive exercise routines.

But recently, I got into a relationship that actually meant something to me, one that I didn't want to fuck up or let my usual fears and past traumas infect or spoil. It's the only healthy adult relationship I've ever been in (consider that I came out at 23, and have been playing catch-up in the love department ever since). I knew that it was way past time to go back to therapy—and now, I wanted to preserve my own heart and brain, protect myself from the trap of unhealthy patterns, and also protect this thing, this relationship, this person that matters to me. So, even though I can truly barely afford it—like, sorry for the late payments, AT&T, but I'd rather have a functioning brain than WiFi—I went back.

That sounds like a joke, but it's actually a twisted reality. We shouldn't be forced to choose between internet access, a health care plan, our student loan debt, a roof over our heads, or the ability to maintain our bodies and minds. Access to therapy is—and I cannot stress this enough—fucked. Finding therapists on your plan who have open time slots, are affordable, and are, you know, good, is like finding fans of the U.S. national men's soccer team—it can't be done.

When I went back to my therapist—who, thank god, was still practicing and available—I wanted to hug her (I didn't, I kept my cool). Or maybe it was more that I wanted to hug myself, because, for the first time in years, I was being proactive in taking care of well-being. Now, I feel hopeful about my ability to maintain my mental health. And I feel good—from the therapy, yes, but also because taking initiative and prioritizing myself feels comforting like a cool summer breeze, or a second consecutive Women's World Cup win for the U.S. women's national soccer team.

Sorry, I still can't stop making everything about Megan Rapinoe.