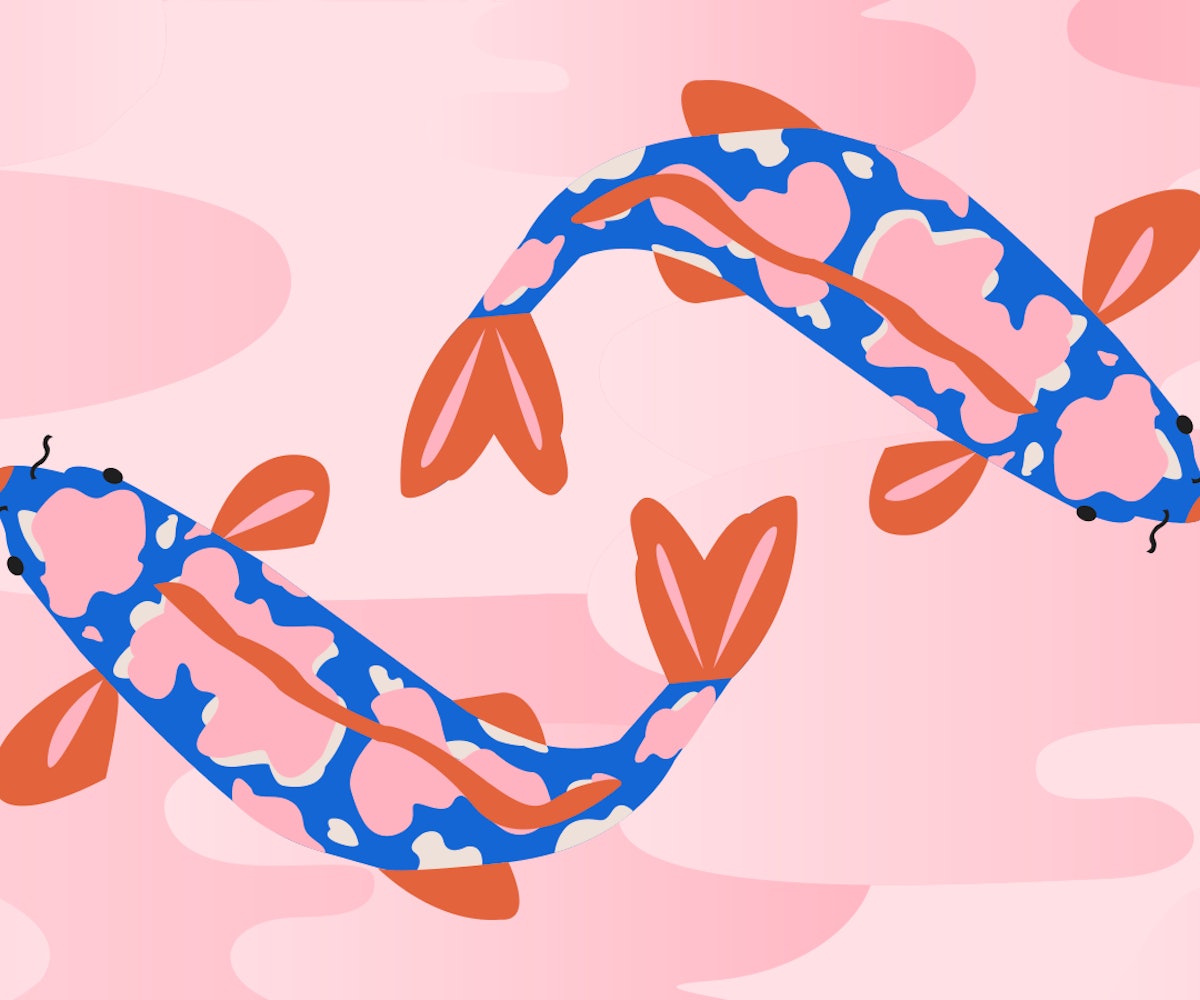 February is almost over, but Pisces season is just getting started. While some of us thrive in this watery, slushy, too-much too-soon cosmos, the rest of us are left grabbing for anything that'll keep us from floating away: a rock ridge, a protruding riverbank branch, an outstretched arm from one of our earthy-grounded friends.

To tide us over into March, I asked my two Most Perfect Pisces friends what being Pisces means to them in hopes that their wisdom might guide us through this dark ocean-bed time. Jenae's assertion that the Piscean "internal dialogue is mixed with an extreme imagination and a splash of impending doom, so every situation needs to be watched," is a key I'm putting in my back pocket, myself. Meanwhile—Aricka's unshakeable self-love, her ability to claim, "I'm pretty quick intellectually, but my heart is a genius"… that's something that I'll be working on for the rest of my life.

What do you feel is the most Pisces thing about you?

Reading this first question and needing three to five business days to process it. Overthinking each word, putting an extra 10 pounds of meaning on why you said, "What do you FEEL" vs. an absolute "what is the most..."

Being so exhausted with empathy and intuition... albeit lush and dreamy in my poor cluttered hyper-imaginative brain. Overthinking and anxiety regarding absolutely anything.

Unless I'm your muse, then I'll live for you specifically... and you. Oh! You too! Over in the corner there, you poor, cute, thing. Let's eat chocolate and cry together.

As a Pisces, you're often called to navigate multiple worlds (people, realities, environments). Do you have a golden rule that you live by as you move between them?

Treat others how they want to be treated. The adage to treat folx how you want to be treated is just silly. I crave attention and care when I'm sick, but my best friend might hate that shit. Why smother someone who will resent it?

Be observant. People joke about Pisces being fainting waifs who want to be in bed all the time. It's because, when we are out, we are watching everyone and everything. Our internal dialogue is mixed with an extreme imagination and a splash of impending doom, so every situation needs to be watched. It's exhausting!! But, we have to see it from every angle since we're going to replay it in our heads for the next two years.

The best part about Pisces is: if I decide to take up another love language, I could. We mold to fit our circumstance as opposed to upsetting anyone else's natural order. That is, until we feel safe and let all the emotions hang out. My love language is receiving gifts because it's rooted in thoughtfulness. Knowing someone is thinking about you feels warm and comforting. It's also the way I initiate self-care. I'll buy myself something that sparks joy on a whim; plane tickets or fake mustaches, the price never matters. Gifts make me feel like I'm being considered, and that means so much.

What do you think is the biggest misconception about Pisces people?

For me, it's all true. I am every stereotype a Pisces could be. I'm too much of a Pisces for myself.

If space and time were not an issue, and you could have one Pisces "mother of your heart" (this is a term I first heard used by Maggie Nelson—a Pisces, also—to talk about people who came before her who inspire her work) ask you out to dinner, who would it be? What would you be dying to talk about?

A big part of me wants to say Aileen Wuornos, but I'd have to officially go with Cristina Fernandez de Kirchner. She served as president of Argentina from 2007 to 2015 and was the first directly elected woman president and the first re-elected. With her background as a lawyer, she led Argentina to become the first country in Latin America to allow same-sex marriage, doubled the middle class, and allocated universal funds per child born. However, in true Pisces form, there were scandals galore. Probably some inside trading-style bribery realness and maybe some light government obstruction. She was never charged and is now a senator for Buenos Aires. I'm a big political junkie so if she could just go ahead and give me her game plan, that'd be great. I like to know where other Pisces draw their lines on fact vs. fiction. We can reason around lots of ethical situations but as a politician that can get extremely dangerous. I just want allllll the details.

How can the internet get to know more about you and your magic-making?

As your Femme Fairy Gaymother, I want you to tell me about your magic and how I can help cultivate the glow! [Check out my] women-owned, USDA-approved, organic skin-care line that provides personalized branding opportunities for feel-good skin. Paint your picture with my product!

What do you feel is the most Pisces thing about you?

Privacy and tenderness. There's difficulty in being attentive to the very living, breathing, electric world around you when there's a whole entourage at your back, on your shoulders, in your face. I crave a balance of quietude, of minding my business when necessary, and shapeshifting the world around me to live up to what I deserve: light, love, and unbounded inquiry. Sometimes that means starting at my ceiling fan in the morning light, not wanting to do anything but live in the magic of my breathing.

Also, Rihanna is here giving us an intersectional red lip, very savory intimates, and shimmer powder after a very slept-on album AND she does not care that you've not met her where she is. That is an eternity mood.

As a Pisces, you're often called to navigate multiple worlds (people, realities, environments). Do you have a golden rule that you live by as you move between them?

Boundaries. Boundaries. Boundaries. I can nurture, I can unlock the doors in others with boundless love, but not at my expense. It's a lesson that becomes critical as I grow older. But I'm also incredibly lucky that the folks in my life are so joyous and compassionate and open and knowing and questioning—I don't have to helm as much emotional labor as I used to. I feel incredibly centered in that these days, despite the world afire.

Making my grandmother's mac and cheese is my love language. I can't say I love cooking, but I love to feed people. I will pestle mustard seed for you, grate five highly priced cheeses by hand in a béchamel sauce that might taste like a prayer. To be clear, that also applies to my chili, my chicken, and my kale and citrus salad. I don't do it often, but when I love, I DO.

What do you think is the biggest misconception about Pisces people?

Being "overly sensitive," as if a speed-of-light contra code toward a centered intelligence is somehow tainted. I feel deeply for those whose concept of time is liminal and so limited that it takes light-years or more just to get to the root of how they feel and why. I'm pretty quick intellectually, but my heart is a genius. Put some respect on its rigorously lit machinery.

And, also, daydreaming as a hindrance. Dreaming sustains, but I still have to pay rent and show up to where I need to be to do that, so what are we really talking about here?

If space and time were not an issue, and you could have one Pisces "mother of your heart" ask you out to dinner, who would it be? What would you be dying to talk about?

Nina Simone was a true Pisces. She wanted to be loved for who she was (for who we can be) so deeply, that my heart breaks every time I hear "Lilac Wine" or her version of "Ne Me Quitte De Pas." I think she knew she was massive, gigantic, un-wilted in wit and tenderness—complicated. Even now, complication is treated as a disease rather than a deep well of wealth. I think her taste, too, was exquisite. Clearly, we'd eat oysters, I'd introduce her to my favorite txakolina, over dessert and boulevardiers we'd cackle and be our most tender, scythe-edged-selves. I'd ask her how hard it was for her to hold her shadow-self and her public persona. And, perhaps, not what she'd take back, but how she'd swim left and left and left if she could have lived here and now. What'd she'd think of a moment, sitting at a table in a sprawling green landscape, of a butterfly crashing into the side of her face as she wrote "Love Me or Leave Me": Would she consider it a nudge from the multiverse or an ironic coincidence?

I just want to know what small moments of living looked like for her, aside from the public persona of what we think we know. And, how she reached for joy even when she didn't feel joyous.

How can the internet get to know more about you and your magic-making?

Visit my website and/or correspond with me through ArickaForeman.com; follow my visual musings on IG @wanderlust313; and ask me about writing, wine, and the escape routes from *now* into our most imaginative futures. I can also be found supporting slept-on QWOC and talking shit in the witching hour on Twitter at @arickamarie. Any of those outlets will keep you updated on my forthcoming poetry collection Salt Body Shimmer on YesYes Books, set for release in October.