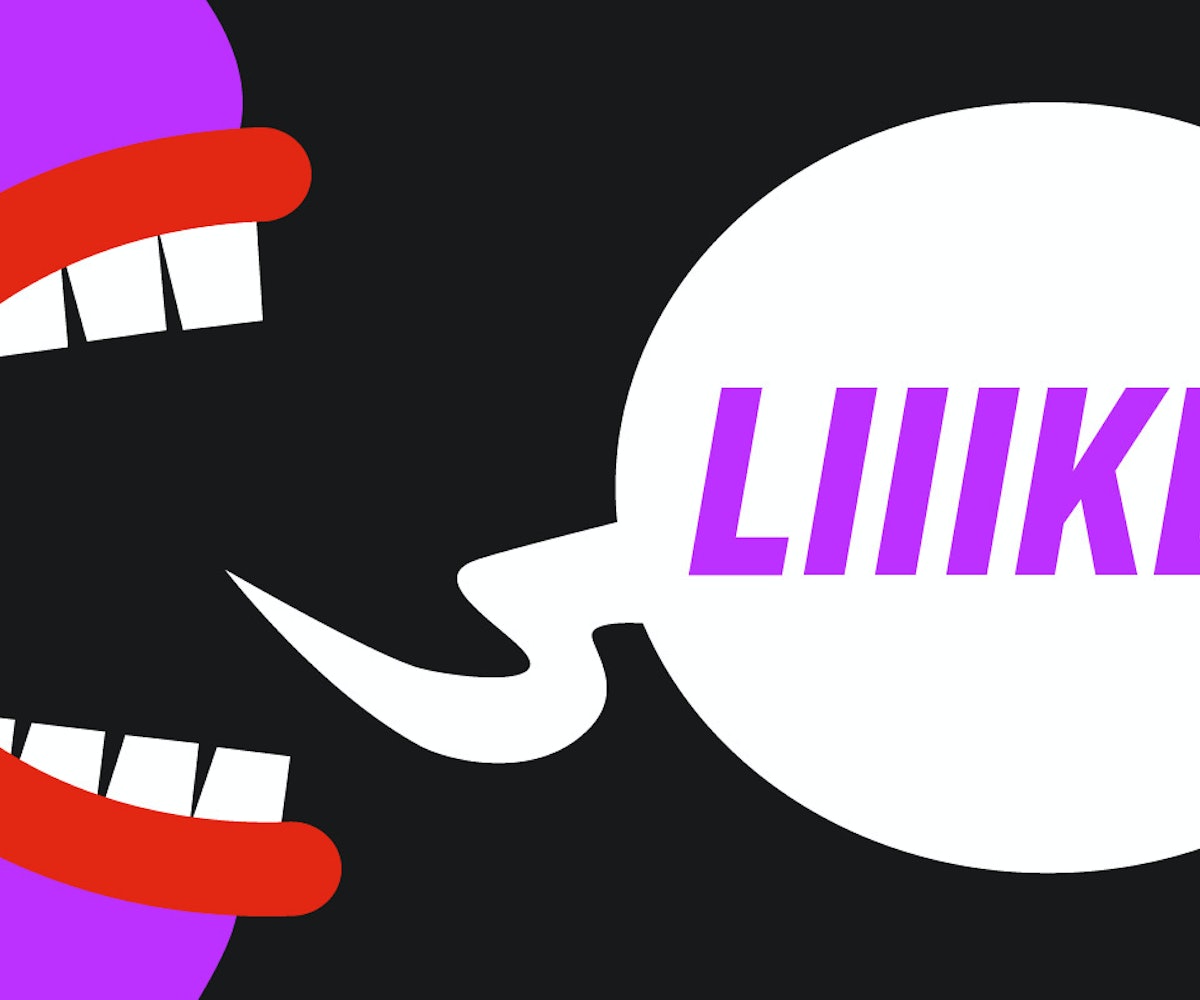 The following is an excerpt from Amanda Montell's forthcoming book, Wordslut: A Feminist Guide to Taking Back the English Language.

In 2016, I was offered a promo code to test out a new app designed to help young people sound more authoritative. Employing voice-recognition, the product offered exercises challenging users to practice talking without "filler phrases" like you know and like, so they could appear more "articulate" in job interviews and presentations. I remember the app vividly because it launched just a day or two after a pair of media training coaches came to visit the office where I was working as an editor for a digital magazine; they were hired to evaluate the staff's on-camera presences since (in an age when reporters are required to double as "influencers") we were appearing in more videos online. The coaches, who were about my parents' age, conducted a few brief on-screen tests with us, after which they determined that while I scored high on "likeability," I could stand to work on the number of times I use the word like in unrehearsed conversation. "It's distracting, that's all," one of the coaches told me with a good-natured smile. "You're quite engaging otherwise."

Around this time in this mid-2010s, the internet at large was having a collective freak-out over "Valley Girl" speak. Journalists everywhere started cranking out think pieces analyzing characteristics commonly noticed and reviled in young women's speech. Like was a big one, and so was vocal fry, a sound quality where you compress your vocal cords to create a low-energy creaking sound at the ends of sentences. Using hyperbolic internet slang ("OMG, I AM LITERALLY DYING") was also much-critiqued, as was speaking with uptalk, where you end a declarative sentence with the upward intonation of a question.

Making poorly informed, pseudofeminist claims about how women talk suddenly became the trendy thing for brands and magazines to do. In 2014 hair care company Pantene released an advertisement encouraging women to stop saying "sorry" all the time. (Because now not only does your hair need a makeover, so does your speech!) A year later, the Guardian published an article titled, "Young women, give up the vocal fry and reclaim your strong female voice," and Mashable released, "5 steps for, like, literally cutting the word 'like' out of your life."

At the height of this media frenzy, I was a twenty-something female, the very target of these articles and commercials, and I had three concerns: 1) whether or not saying like in excess is really exclusive to young women 2) the purpose it serves, if so and 3) why everybody hates it so much.

When making fun of teenage girls, imitators go for these sorts of phrases: "I, like, went to the movies? And I was like, 'I want to see Superwoman?' But Brad was like, 'No way?' So we, like, left." A Canadian study from 2000 confirmed that most listeners do in fact perceive young women to use like more often than anyone else and that they associate the word with a lower level of education.

Fortunately, there are plenty of language experts who've taken like seriously enough to figure out what it actually is beyond this perception. One of these scholars is Carmen Fought, a linguist from Pitzer College, who says, "If women do something like uptalk or vocal fry, it's immediately interpreted as insecure, emotional, or even stupid." But the truth is much more interesting: Young women use like, vocal fry, and uptalk not as mindless affectations, but as power tools for establishing and strengthening relationships. Saying like "every other word" is in fact not a sign of ditziness, but instead has a unique history and specific social utility. And young women are not the only people who do it—although they do happen to do it most cleverly.

Despite the word's detractors, like is in fact one of the most versatile words in the English language. Alexandra D'Arcy, Canadian linguist at the University of Victoria, has dedicated much of her research to identifying and understanding the many functions of like. "Like is a little word that we really, really don't like at all—and we want to blame young girls, who we think are destroying the language," she explains. But the truth is that like has been a part of English for more than two hundred years. "We can hear speakers today in their seventies, eighties, and nineties around little villages in the United Kingdom, for example," D'Arcy says, "who use like in many of the same ways that young girls today are using it."

According to D'Arcy, there are six completely distinct forms of the word like. The two oldest types in English are the adjective like and the verb like. In the sentence, "I like your suit, it makes you look like James Bond," the first like is a verb and the second is an adjective. Today, these two likes sound exactly the same, so most people don't even notice that they're different words with separate histories. They're homonyms, just how the noun watch (meaning the timepiece on your wrist) and the verb watch (meaning what you do with your eyes when you turn on the TV) are homonyms. The Oxford English Dictionary says that the verb like comes from the Old English term lician, and the adjective comes from the Old English līch. The two converged at some point over the last eight hundred or so years, giving us lots of time to get used to them.

But four new likes developed much more recently than that—and D'Arcy says these are all separate words with distinct uses, as well. Only two of these likes are used more frequently by women, and only one of them is thought to have been masterminded by "Valley girls," aka young Southern California females in the 1990s (the era of Clueless and Fast Times at Ridgemont High). That one would be the quotative like, which you hear in, "I was like, 'I want to see Superwoman.'" As lampooned as it is, pragmatically speaking, this like is one of my favorites because it allows you to tell a story, to relay something that happened, without having to quote the interaction verbatim. For example, in the sentence "My boss was like, 'I need those papers by Monday,' and I was like, 'Are you fucking kidding me?'" you're not repeating what you truly said but instead using like to convey what you wanted to say or how you felt in the interaction. Thanks, Valley girls. This very useful quotative like continues to explode in common usage.

The other like that women tend to use more frequently is categorized as a discourse marker and can be found in contexts such as, "Like, this suit isn't even new." A discourse marker—sometimes called a hedge, or a filler word—is a type of phrase that can help a person connect, organize, or express a certain attitude with their speech. Other discourse markers include just, you know, and actually. As for why young women use the discourse marker like more, scholars have a theory: Studies on adolescent speech indicate that people hedge with like in order to "partially detach themselves from the force of utterances that could be considered evaluative, either positively evaluative of self or negatively evaluative of others." Jennifer Coates, a linguist at Roehampton University, postulates that men might use this type of like less overall due to their choices of conversational subject. "Unlike female speakers, male speakers on the whole avoid sensitive topics," she says. By and large, men do not self-disclose or talk about personal matters as liberally. Thus, the need for this particular hedge does not apply.

There are two last forms of like: one is an adverb, which is used to approximate something, as in the sentence, "I bought this suit like five years ago." As of the 1970s this like has largely replaced the approximate adverb about in casual conversation, and it has always been used equally among men and women (so it isn't hated as much). And last, there's the discourse particle like, which we hear in, "I think this suit is like my favorite possession." This like is similar to the discourse marker, except that it's not used in quite the same way syntactically or semantically; plus, dudes use it just as much as women do (D'Arcy doesn't know quite why that is), though they're almost never ridiculed for it.

Objectively, we can see that using one, two, or all of these different likes in the same sentence isn't inherently bad. As a matter of fact, some studies have demonstrated that speech lacking in likes and you knows can sound too careful, robotic, or unfriendly. Ironically, the number of likes I used in that media training evaluation at work is likely what contributed to my perceived "likeability."

So next time someone accuses you of saying like too much, feel free to ask them, "Oh really? Which kind?" Because D'Arcy says that ordinary speakers tend to buy into the Valley girl stereotype so hardcore, blaming young women for all of these likes, simply because they don't notice the differences among them.

Wordslut: A Feminist Guide to Taking Back the English Language is available for purchase on May 28.