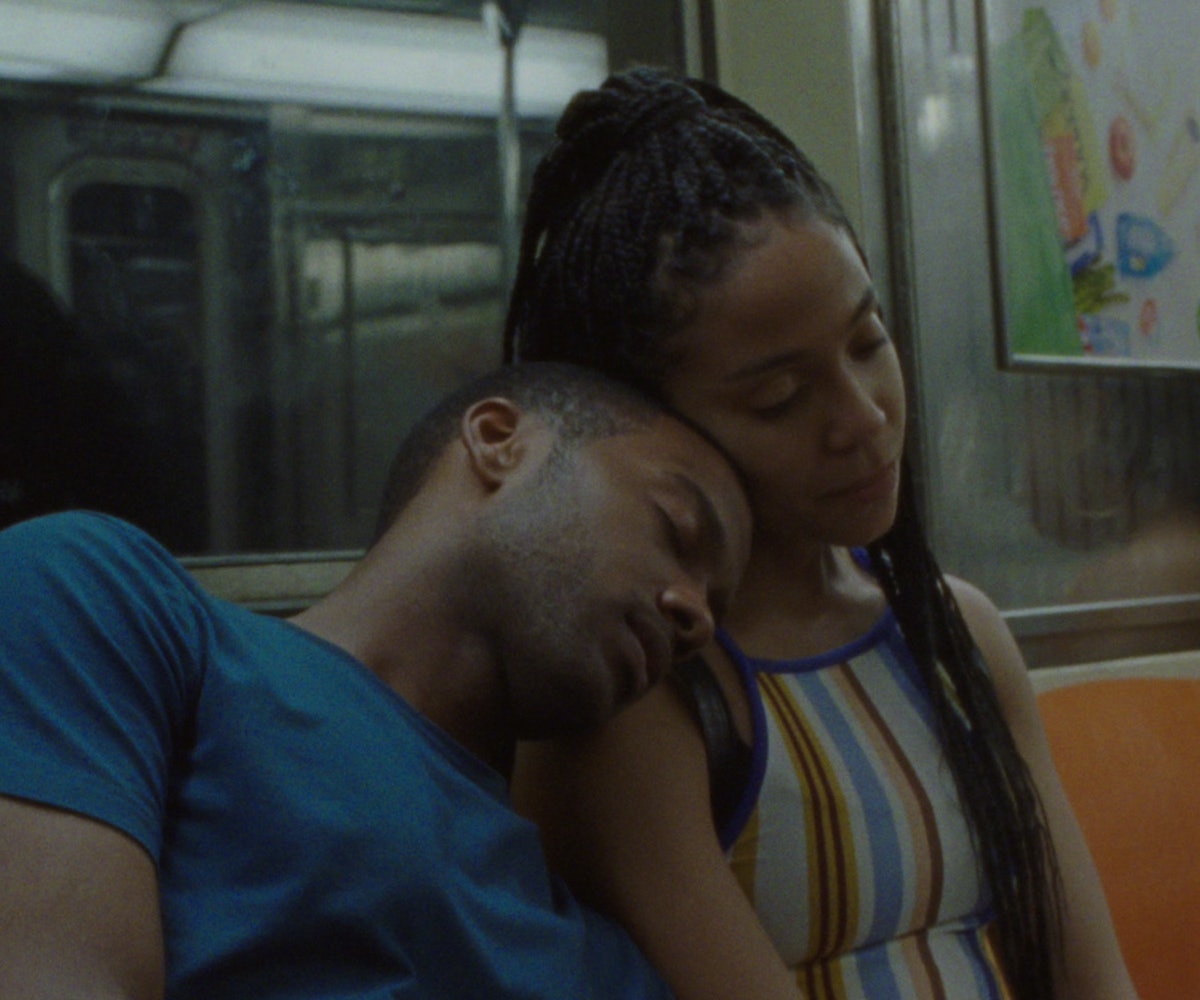 At the beginning of Premature, 17-year-old aspiring poet Ayanna assumes she's going to spend the summer months before college running around town with her friends during the day and cooped up at home with her mother and her mother's new boyfriend at night. But when Isaiah, an aspiring musician and a new face in the Harlem neighborhood Ayanna has called home for years, mysteriously shows up and takes a clear interest in her, Ayanna can't help but reconsider these plans. Soon, she's going days without seeing her friends as she explores the city with her new man, enjoying the all-encompassing spark that accompanies first love. It's a beautiful story to watch play out, but it's also one that feels doomed, in one way or another, from the start. After all, Ayanna's scheduled to leave for college in only a few months. What is she supposed to do with all that love when the time comes?

Zora Howard, an actress, writer, and poet herself, plays Ayanna with a clear understanding of teenage contradictions. From the outset, it's clear that Ayanna is brilliant. She is quiet and reserved, a bookish nerd that stands in stark contrast to her hilariously rambunctious best friends. But she's also young and easily prone to following the spontaneous whims of her still-developing heart, no matter the potential consequences. Like many teenagers on the brink of full-fledged adulthood, Ayanna assumes she knows the ways of the world right up until something happens that reminds her there's still much to learn. Though Howard is removed from her own teen years, the actress, who co-wrote the film alongside its director Rashaad Ernesto Green, effectively captures this conflicting energy in a masterful (and, hopefully, career-making) turn, helping shape Premature into a coming-of-age love story that's as much about finding your first love as it is about using that first love to find yourself.

Days after Premature was unveiled to the public, NYLON hopped on the phone with Zora Howard to talk about the collaborative process she shared with Rashaad Ernesto Green, what it felt like to write poetry from the perspective of someone other than herself, and why she's committed to making Black films that don't solely focus on our trauma and suffering.

NYLON: Premature was first released as a short, starring you, over a decade ago. How did you and co-writer/director Rashaad Ernesto Green decide to team up again for the feature?

Zora Howard: Rashaad and I met each other many, many years ago. We were both working in the theater scene in Harlem. He ended up going to NYU grad school for filmmaking and writing the Premature short, and because we had that relationship, he cast me as the lead. So about three years ago, while I was in grad school in California, he called me up and said, "I think now's the time." I didn't think it was the best time. I was a little busy. But during my break from grad school, I came back to Harlem and we got in a room together and tried to get a draft of something in one month. We knew early on that we wanted to write a love story and that we wanted to feature the point of view of a young Black woman. So that's how Ayanna was born. Our writing process was full of a lot of listening to music, a lot of watching shows, and bringing things into the room that inspired our individual art-making. Rashaad and I have known each for a very long time, but there's a lot we didn't know about each other. I think it's completely different to work with somebody as a creator. It's a different kind of relationship. You have to be vulnerable and exposed in ways you might not have had to before. Eventually, we got that draft out, but it wasn't until later in the writing process that scenes from the Premature short started to make their way into the draft. Once that happened, we embraced it.

What was the collaborative process like? You and Rashaad are both Black, obviously, but your perspective as a woman is inherently different than his as a man. How did you come together as a team to create something that felt right for both of you?

ZH: Once we knew that Ayanna was the center of our story, we were both committed to staying as true to who we knew her to be as possible in the storytelling. We would hold each other accountable to that. Then, there's also Isaiah, and we acted similarly because we wanted to make sure that he didn't only exist as the foil to Ayanna's character. He needed to feel like a three-dimensional character that's flawed. Once we felt like we both knew who they were, we both wrote Isaiah and we both wrote Ayanna.

There was a lot of challenging of each other. Because of our [individual] perceptions of who these characters were, it took a while for them to align. We really felt we had to both know each character in an intimate way. Eventually, Rashaad could start a scene, and I could finish it. Or I would write an entire scene, and Rashaad could come in and change a thing here or work on the dialogue there and it still felt true and right. Once we had that trust established between us, once we heard each other out and felt comfortable challenging each other, there was a lot more ease to the writing process. It took time, but we had to learn to trust each other in that way.

At the talkback after the IFP screening of the film, you mentioned that poetry wasn't originally supposed to be included in the film, until one day when Rashaad challenged you to read some of your poetry on the spot. How did it feel to transpose your poetry onto a fictional character?

ZH: I think I had a leg up because of how deeply I knew Ayanna, having gone through the process of playing her and inhabiting her. It was a fun experience to fit in what Ayanna was like, which was different from what I was like. We're different in many, many ways: we're not the same age exactly and we've had different life experiences. So to see myself in Ayanna's experience and in Ayanna's world, and to write poetry from there, you're just trying to sit within Ayanna and transliterate that emotional life that you know her to be feeling. But I'm so glad that element is there and very much alive in the film because we did need to hear more from Ayanna. We wanted to see behind her eyes. We had less of that before the poetry was integrated into the film.

You both talked about the importance you placed on making a film that wasn't about Black trauma, but about Black love. What drew you towards that genre in the beginning?

ZH: Well, I also consume a lot of film, and it does something to you to sit in the audience and see, more often than not, that the representations of people that look like you are overwhelmingly about their pain and suffering and struggle. Those things are true, to an extent, to the life we experience in this country, and it's important that we represent them. But it's not the most present truth that I feel as a creator. Living in this life, living in this body, there's an experience of being alive, of experiencing love. If we constantly chose to sit in the pain and the violence and the aggression that's inflicted on Black people and Black bodies, if that was the way we navigated the world, we'd all be dead. That's not a life source.

So it is returning to what makes us strong and what makes us vibrant and what makes us lovable that are the things that fuel my creation. When Rashaad and I were deciding that we wanted to tell a love story, it was just a reflection of the truth that was most present in our lives — that we are loved, that we are often in love, and that we are constantly on the journey to find self-love. Because of what that narrative is combatting, it feels radical. But what we're trying to capture is actually quite mundane. It's everyday. It's small moments of life, and I wanted to say that our small moments of life are worthy of the big screen.

"I wanted to say that our small moments of life are worthy of the big screen."

I really appreciated that this film felt so authentically and unapologetically Black — from the way the characters spoke to the specific issues they faced. I related to it a lot. It's very obvious that Black creators were behind this film. During the writing process, did you ever fear that, by telling a story that felt true to your own experiences, you might alienate some viewers that weren't willing to engage the film on those terms?

ZH: Above everything, we were trying to tell an authentically human story. Yes, the specificities of the world are rooted in a Black experience, but there's nothing specifically Black about falling in love for the first time. There's nothing specifically Black about leaving home and leaving everything you know to venture out and discover the world. These are all very human experiences. So there was never a point in our writing process where we were fearful of the film alienating audiences because, again, we were holding each other accountable to telling the human truth of these characters and this world. That's the thing about storytelling — it's why you can see a film in a completely different language, or something set on Mars, or animal cartoons, and still feel for an experience. When it's good, it strives to tell a human truth. So, yes, we weren't going to shy away from exploring that human truth rooted in a Black experience, because that's what we love, that's what we know, and that's what we feel is lacking and wanted to contribute. We always knew that the story would resonate with many people because it's a love story — and I hope that we're all out here feeling and experiencing and knowing love.

Finally, I know many filmmakers hate answering questions about the endings of their movies, but I was so curious why you chose to conclude Premature with Ayanna and Isaiah sitting on a bench as she waits for a train that will maybe take her to college. Did you want the audience to draw their own conclusions about the future of these characters or was this meant to be a deliberate, concrete statement?

ZH: I think the only thing we were trying to communicate is that Ayanna has a choice. That's what is most important, is that she, as this young Black woman in the world, always has a choice. She gets to choose for herself based on what she knows so far. And once she makes that choice, or whatever choice she does make, she will get to choose again.