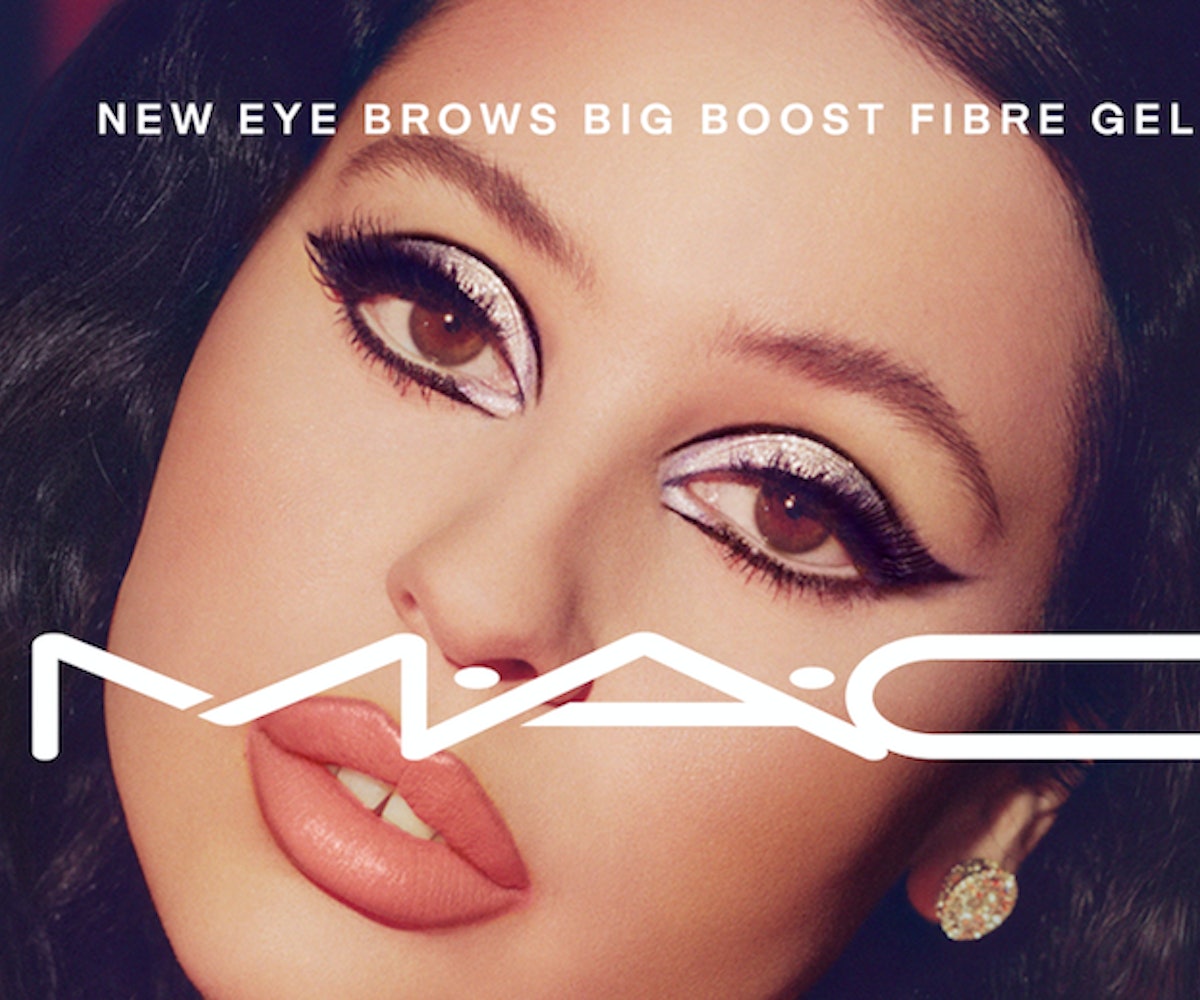 After a whirlwind of a 2019, Euphoria breakout star Alexa Demie is back, this time with a beauty campaign: Alexa Demie x M.A.C Cosmetics. And not only is the collection, called More Than Meets The Eye, a fitting choice for Demie, given the looks her character Maddy Perez and fellow castmates don in the hit HBO show,but it's a full-circle moment for the actress, who grew up going to work with her mother, a former M.A.C store employee and makeup artist.

"It felt right," Demie tells NYLON of the partnership. "I'm super picky about who I partner with and what I do, and M.A.C was like a no-brainer."

Out today, the line is naturally made up of everything you need to achieve "Euphoria Eyes" — 36 revamped eye shadows and two completely new products: Dazzleshadow Extreme shadows, a one-swipe molten metallic color formula, and the EyeBrows Big Boost Fibre Gel, a gel meant to give the brows a voluminous boost that lasts 24 hours.

The beauty campaign is without a doubt a notable one for the rising star, but the authenticity makes it a special one for fans and fellow M.A.C fanatics alike, too. Ahead of today's release, NYLON caught up with Demie to talk about her relationship to beauty, making her mom cry, and Maddy makeup tutorials on YouTube. Read highlights from the conversation, below.

Who did you look up to for beauty when you were young?

Growing up, I was always in awe of Sophia Loren and Maria Felix, and all of those classic beauties. I was watching a lot of old films. They, to me, were like goddesses. I would look at them and just be blown away, and I think with that whole era, they just knew what they were doing with lighting. Everyone just always looked flawless. So, definitely Sophia Loren, Maria Felix, and there's a Spanish actress and singer Sara Montiel, Marilyn Monroe.

Did they inspire how you expressed yourself through beauty?

Absolutely. They always had a winged eyeliner of some sort, and I think partly from them — and partly from the school that I went to in L.A. — that definitely influenced me. That kind of became my look. I just always had clean skin and winged liner and clear lip gloss. I definitely was influenced and wanted to look like that. Even with photoshoots, I would always send those references to people and try to get that look, that perfect lighting look. That's when I fell in love with film, like actual film photography. I didn't do it, but my friend was a photographer and was one of the first people to shoot me, and he would shoot me on this film camera, and it all just started there.

Your mom was a makeup artist. How early on did you start dabbling in the world of makeup?

What are some of the beauty tips that your mom taught you when you were younger that you still follow to this day?

Number one: The most important thing is your skin. She would yell at me if I would come home late and go straight to my room and not wash my face. She would literally come in and force me to get up and wash my face. So washing your face, using all of your proper moisturizers and serums. The base is the most important because then your makeup just lays on right. And then she always, always, always had a nude lip. She had her nude brown lip liner and she had her nude lip, and it was always matte. So you will probably only see me in a brown or nude lip on any given day. Sometimes I jump out of that comfort zone and I'll do a red lip, but it's usually brown or nude. I definitely got that from her.

Can you talk a bit about your relationship with the M.A.C before this campaign; what was it like growing up with your mom working there?

I mean, I was going into the M.A.C store, I think, when I was 10 or 11. She would bring me in and [sometimes] use me as a model, because she would often have to show everyone else that worked there how to do a quick editorial look. The time that sticks out to me the most is when she brought me in, I sat up on this chair and everyone was watching. She blocked out my eyebrows, and did a super bright aqua blue eye with a red lip, it was gorgeous. I wanted to wear it the entire day. Being in the M.A.C stores was always like a party for me. Everyone was always in a look, everyone was so loving and supportive of each other. Everyone was just having fun and really loved and appreciated fashion and beauty. I probably asked her to bring me to work so much.

What did it feel like when you found out you were going to be in this campaign?

I was ecstatic. To me, it's like the iconic brand. Almost every one of my favorite makeup artists' jobs were at the M.A.C counter. That was their first gig. Everyone that I've spoken to has a very special connection to M.A.C somehow. Even my makeup artist Raul [Alejandre] who I brought in to do my makeup for the campaign, one of his first countertops was there. So, when I brought him in to do this campaign, he was literally sobbing. My mom cried too. I mean, she cries a lot, she's very emotional [laughs], but it's a big deal for her.

What's your favorite part of the collection?

I've been getting more and more comfortable with colors. In middle school and early high school, it was mainly just winged liner for me, so, as I've gotten older, I love just playing with blues and greens and pinks, and doing different eyeshadows. I obviously was so excited that I got to do the eye campaign because there's so many incredible colors within the collection, and we got to play with a lot of them.

Speaking of you playing with more color, of the characters you've played, which one is the closest to your actual beauty style?

Definitely Maddy. Yeah, for sure. In Waves, I didn't wear any makeup, and they would make me look a little more run-down, and I think Maddy takes it to a whole other level. You're going to see her in a look like every single day no matter what the occasion. I don't wear makeup every single day, but, when I do, I like to give a look.

Do you watch YouTube at all, or have any favorite beauty YouTubers?

I really don't! I watched a couple of the ones where they recreated Maddy's look. Usually a friend will send it to me, and I'll watch it, and it's so cute. It's so fun to watch them recreate these looks and use me as a reference. It's just wild, the impact that the show has had and even the beauty looks that are done outside of the show, it's kind of crazy.

There are so many Maddy tutorials on the site! Did you have any idea of how big of an impact the show is going to have, not just on younger people but the beauty world in general? "Euphoria Makeup" has really defined a whole new wave of beauty.

Honestly, I don't think any of us did. But Sam Levinson — the creator of Euphoria — wanted this. Especially with Maddy's character, he was like, "I want girls to pause the TV and recreate your makeup." That was his goal, so he's a genius, and he got what he wanted. But I definitely had no idea that it was going to have such a crazy impact. I didn't know at all. It went to a whole new level. A bunch of fashion designers and runway shows were doing a lot of Euphoria looks as well, so that was kind of crazy.

What is your favorite Maddy look of all time?

Oh, shit. One of my favorite looks was the one where I have the gems all around the eyes and in my hair. It just stuck out to me. And then there's another look that was really simple, but it was like a blue eyeshadow that had sporadic stones around it. It was probably a really quick moment that maybe not a lot of people saw, because sometimes my looks, they didn't get as much screen time as they should [laughs]. It was like a really pretty blue eye, and then there were a couple gems scattered around. I'm probably missing some, I can't remember them all. There are so many looks.

What is your favorite artist or song right now to listen to while you're getting ready?

All I'm listening to right now is the Madonna album Something to Remember. She just gets me in the mood.