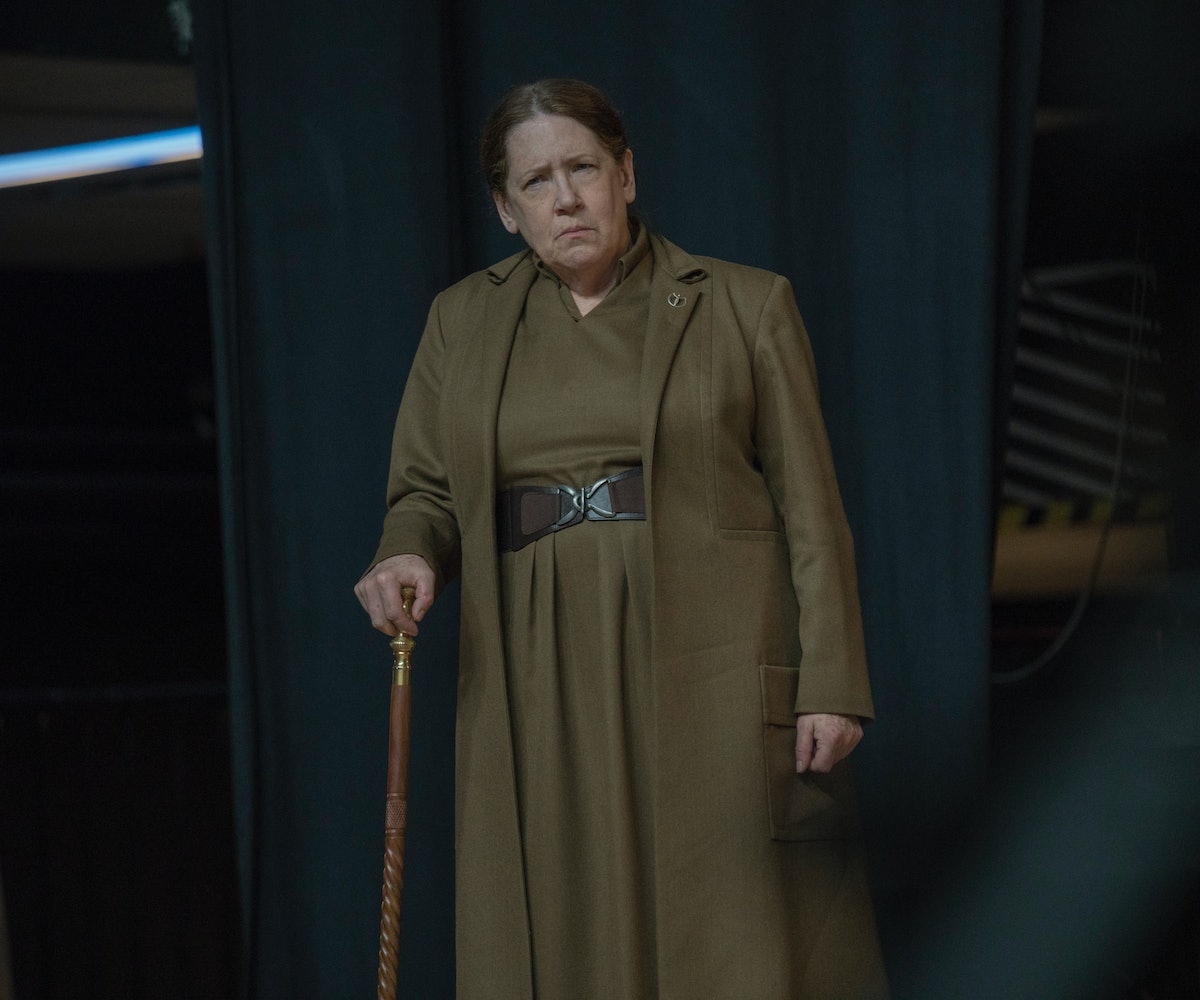 When, earlier this year, Alabama signed into law its draconian de facto abortion ban, a lot of coverage concentrated on the fact that the 22 Alabama state senators who voted against including an exception for rape or incest were white men. And while it's undoubtedly true that Alabama's abortion ban is a symptom of living in a patriarchal society, it's also true that some of the patriarchy's most ardent supporters are women—particularly white women. After all, it was a white woman, Governor Kay Ivey, who signed Alabama's abortion ban into law.

This reality—that women are often among the most prominent oppressors of other women—is one that Hulu's The Handmaid's Tale has explored since it first premiered, two years ago, perhaps most notably through the character of Aunt Lydia, played with chilling authority by Ann Dowd.

In her role as an "Aunt," Lydia's job in the fascist, fundamentalist society of Gilead is to train the young women who serve as handmaids to the elite class. She's a funhouse mirror version of an etiquette teacher, only instead of schooling her pupils on which is the salad fork, Aunt Lydia trains them to acquiesce to being raped, impregnated, and delivering a child whom they will never see again—and that's what happens under ideal circumstances.

While there are other characters, including other women, who have power in the supremely male-oriented Gilead, Aunt Lydia's position is fascinating in that she utilizes her position not to further elevate herself, but to oppress those who might question society's foundation. She is the ultimate rule-follower, a foe to any sort of dissent, and—the scariest part of all—she thinks she's doing it for some "greater good." This has long been the rationale of fascists everywhere, both real and fictional (hey, Daenerys), but it feels particularly insidious when seen acted out by a mere factotum, rather than a leader. And yet, that's so often what happens: It's people lower down the power rung who do the dirtiest work, not out of mere cynicism or for a power grab, but because of their convictions when it comes to the cause at hand.

Recently, I spoke with Dowd about Aunt Lydia's relationship to the young women she teaches, what in the character's past could have resulted in her fanaticism, and why it's actually a really fun role to inhabit.

I feel like Aunt Lydia might have been a particularly challenging character to play for the first two seasons, in part because she is one of the only main characters not to have a backstory. That hardly made her one-dimensional, but still something of an enigma. That all changes in this season, though, as we learn more about her past. But prior to this, how did you work to give her an interiority that hinted to her rationale for assuming such a punitive role within the society of Gilead?

What makes sense to me—and Bruce Miller, our showrunner—was that she had been a teacher before Gilead. And that made a tremendous amount of sense to me on a few levels: She knows how to control a room; she has a love for students—and not all teachers do, but I believe she does; and her assessment of where the world was before Gilead took over—having taught these young people who had no manners, no respect for authority, no relationship with God, dreadful language, promiscuity, abortion, sex before marriage, didn't know what the inside of a church looks like—was that she saw the extreme pollution of the world. This is God's most precious gift, the earth—and she saw the [denial] of another precious gift, the gift of a beautiful baby being brought into the world.

It would seem like that devotion to keeping young people on the straight-and-narrow path translated really easily to Gilead, even if it's not clear that she has an explicitly religious background.

Now, we don't learn the backstory of why she has such a fundamentalist approach to religion—we know that it's very important to her—but what those beginnings were, we don't know. I'm going to imagine they were very intense. Now, she sees her job as rescuing these girls from a life of debauchery without meaning, and for her, without God in your life, that's barely a life. That's her position. She wants to know the inner-essence of beauty that they possess, because God gave it to them. [Aunt Lydia's] job is to bring it out.

[Speaking as Aunt Lydia] Now, there's gonna be a lot of resistance, and I'm gonna do what I have to do to get the job done. I apologize to you girls because it's not gonna be easy. I cannot help you there. This is my job, and I think it's not about power, it's about a duty-bound approach: this is what I signed up for. I'm not living in opulence like those commanders and those wives and those silly baby shower nonsense with the big animals. I want to take them aside and say, "By the way, in our holy conversations in the church basement, nobody talked about that way of life. We spoke of moderation. We spoke of serving God always as our first and only purpose in this world, and we do those things to achieve a connection there, and to apologize for what we have done to the gifts He has given us."

It would seem though, that she lives by that maxim of lots of abusive people—when she hurts the handmaids, it's like she's always thinking, This hurts me more than it hurts you. But, of course, up until the end of Season 2, she isn't physically hurt. How can someone like Aunt Lydia recover from that?

She stays on that path, and knows that sometimes it's going to be difficult. She loves that little Janine. She loves June. She loves them all—some more than others—but until she has that terrible fall, and it's not that she changes her point of view, the change is she no longer has the confidence she had. How did she miss that? How did she miss that handmaid not being in control? Because Lydia prides herself: I know this one, this one is off today, going to have a little chat tomorrow. She goes over it at night: That one's okay; good, good. She's come along; she's more respectful; her eyes are down when I go by her.

She missed it on Emily. She'll never forgive herself for it. She's ashamed of it. She's not vulnerable. She's physically hurt. How are the handmaids going to look at her now? How are the commanders? And most importantly, she's not in control of her feelings. She's triggered very easily.

She truly sees this as a duty and a calling, which is what makes her so terrifying. That conviction would be laudatory if used toward more moral goals. But instead, there's just so much darkness. How does it feel making a show like this? Is it emotionally taxing? Or is it almost cathartic to get to relieve yourself of all this specific angst in a healthy outlet? Like, is it weirdly relaxing?

It is. If it's a really emotional thing, it's such a pleasure if you've given in entirely to the scene, given it everything you have, and you get through. It's joy, because, at the end of the day, it's make-believe, isn't it? And when we go home, everybody has their eye, everybody has their finger.

That's what actors do, they jump into a world that does not have the real consequences.

New episodes of The Handmaid's Tale are available on Hulu every Wednesday.