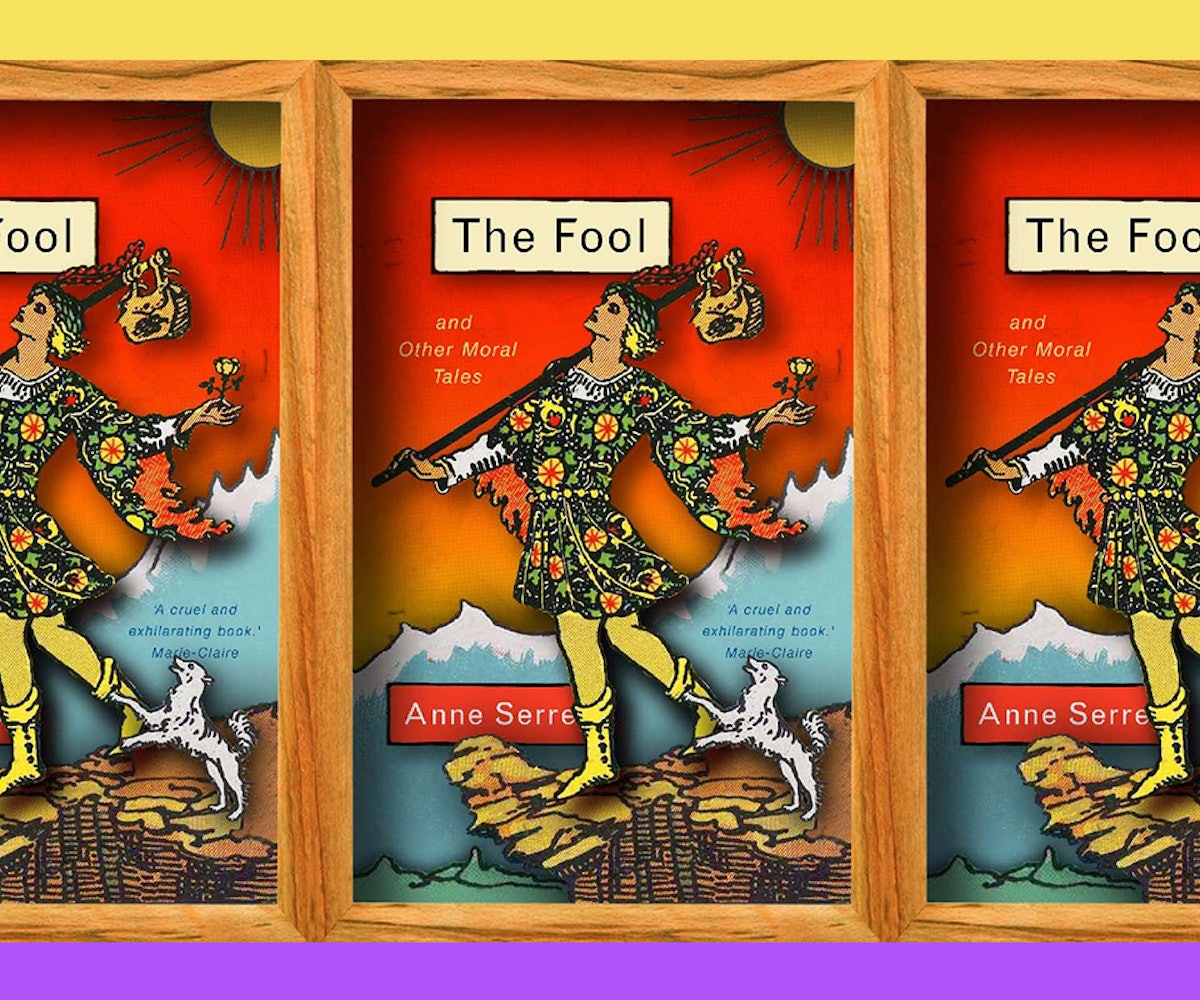 One of the things not said often enough about literature is: Quite often, it is immensely pleasurable to read a story or a book, and only have the faintest idea of what it's all about.

Critics refer to this quality by many names, and many traditions lay claim to it, but no words feel entirely honest about the pleasure of being baffled. "Absurdist" is one of those terms—when applied to writers like Fernando A. Flores or César Aira, it's an appropriate way to express the surreal, the flights of fancy, and unreal plot points within their work. "Avant-garde" is another—and while much ink has been spilled using writers from Franz Kafka to Roberto Bolaño to describe the avant-garde, the word itself often seems more like a weapon than an analytical tool; a bar the average reader cannot meet because of the sheer highfalutin intellectualism of the prose.

Anne Serre, the remarkable French writer of the novella The Governessesand The Fool and Other Moral Tales, writes in a manner for which yet another word was seemingly invented: fabulist. And yet, I do not wish to put Serre in the company of all these storied male writers, if only because in her hands the avant-garde or absurdist or whatever word one chooses, takes on a very different tinge at its zenith: exploring the contours of female sexuality in its shocking, violent, racy, and mostly completely incomprehensible ways.

That isn't to say that's all that Serre does. In fact, she does quite a bit more. In two of the three "moral tales" that comprise The Fool, Serre is indeed very much like César Aira in that both often seem to depart from an autobiographical premise and move outward from there, exploring a cavernous terrain with a dark wit and more than a hint of improvisation. In the titular story, for instance, Serre occupies herself with a first-person account of a writer's life, viewed through the prism of the tarot card of The Fool, a real archetype that all people (except—hilariously—all American writers) are acquainted with:

He doesn't enjoy company, as we have seen. Anyone who spots him coming feels very uneasy; indeed, in a good many novels, and in life as well, we have seen families abruptly torn asunder, couples who loved each other hate each other, children in good health suddenly drop dead, horrific car crashes or worse in the vicinity of his ghastly, magisterial presence. He happens by and turmoil ensues. He happens by and you get one of those inexplicable moments, just when you were feeling happy and at peace with yourself, when everything clouds over, grows dark, comes crashing down. Even Virginia Woolf, who knew a great deal about the subject, went and threw herself in the Ouse when the fool happened by.

I don't quite know what Virginia Woolf or unease has to do with The Fool—particularly since the narrator of this story has just revealed that she recognizes The Fool in her lover—but whatever it is, it's probably quite good, and in any case, it doesn't matter. What matters is the rumination through which Serre ramblingly leads me either to recognize myself ("Writers want to die. It's a family secret. People think they want fame; they think that, too, but what they actually want is to be carried off as a small child in the arms of their father on that marvelous horse making its way through a German forest") or an odd and funny fact I've never quite thought about (for those acquainted with the figure on the tarot card: "What's strange is his way of placing the staff his bundle hangs from over his right shoulder while holding the staff in his left hand. The gymnastics involved is so acrobatic that even in a sentence it's hard to give an account of it.")

That these are moral tales doesn't seem obvious to me either, except perhaps in the case of the second story, "The Narrator," where Serre dwells on the violence of turning real people into characters, on how the very act of narration may be a way of seizing power. The protagonist, called simply "the narrator" is more than a bit pathetic, even a bit stupid, and is constantly being chastised by the actual narrator telling the story. The narrator's only capacity is that of telling a story. Amongst friends, the narrator's pitiful: "They talk about politics, they know all sorts of things and the narrator is quite lost… The narrator's a laughing-stock when he's not telling a story." But—the narrator has this power: the power of manipulation, ways to make people pity him. He can sustain a lie forever, sometimes (or all the time, one suspects Serre is arguing) at the cost of having no one. Until he gives up the power of narration forever: "Would you really like to stop being a writer? And the madman says yes." By which I think Serre means—we writers are always saying no.

If I were to read stories like that by Serre forever and ever, I would be a very happy patron, and I would proselytize on her behalf regardless of this next fact: When Serre sinks her teeth into human, often female, sexuality, she's peerless. That's a real feat, because Serre is not exactly in uninhabited territory. Her manner of exploring the taboo, for instance, puts her in conversation with fellow female Francophone writers Leila Slimani, Marie NDiaye, and Amélie Nothomb. Her way of questioning what society deems immoral seems of a piece with Amparo Dávila, Clarice Lispector, and Carmen Maria Machado. The difference, perhaps, is the dissonance between Serre's soothing, even prim prose and the alarming premises. In the exhilarating The Governesses, three adult sisters in charge of four young children, lure, hunt, and devour men, always in the throes of sexual passions. But the third story in The Fool surpasses even that. "The Wishing Table," originally an independent novella, establishes just how far Serre is willing to go with her no-holds-barred fiction. The family at its core—a mother who is at all times naked, a cross-dressing father, and their three underage daughters—has a relationship described by the book's blurb as "happily polyamorous." The narrator, one of the daughters, agrees: "Yes, I will always deny that my childhood was traumatic," she says. "And it's not out of loyalty to my parents that I insist on the beauty of that period of my life. Our union was so intense and so compact, our sexual complicity so steadfast, like a firm handshake, that I've been drawing strength from it ever since."

Here is a novella so boldly perverse that it caused a furor when first published in French in 2012. And in this case, since I can only speak for myself, suffice it to say that Anne Serre doesn't quite allow for me to react in horror—statutory rape!—at the premise. This is not because I feel she's testing the bounds of my own morality per se, but because whatever design there may be at play, this is simply the story she has chosen to tell, and I assented to read it with relish. Few writers can elicit this reaction, in my experience. Countless times in my life the fundamental wrong-headedness of stories has made me object, without regard to the writer's self-awareness. But just a few writers—great misanthropic writers—navigate depravity in a manner so enthralling. In a manner that informs my objections rather than calling to mind old ones.

There is some truth to the cliché that contemporary Francophone writers plumb the depths or amorality or immorality more often than their Anglophone counterparts. Leila Slimani, for instance, known to English language-audiences through her portraits of a child-killing nanny and a sociopathic sex addict, asks of her readers to consider, not sympathize with, unrelentingly awful women. But the synopsis-proof Serre is different still. There's an icy challenge when she writes: "You think things appear only on playing cards; you couldn't be more wrong. In reality, they exist in life."

I may have the best time allowing The Fool to baffle me, but it also makes me shudder: What if its contents really do exist?

The Fool and Other Moral Tales is available for purchase, here.