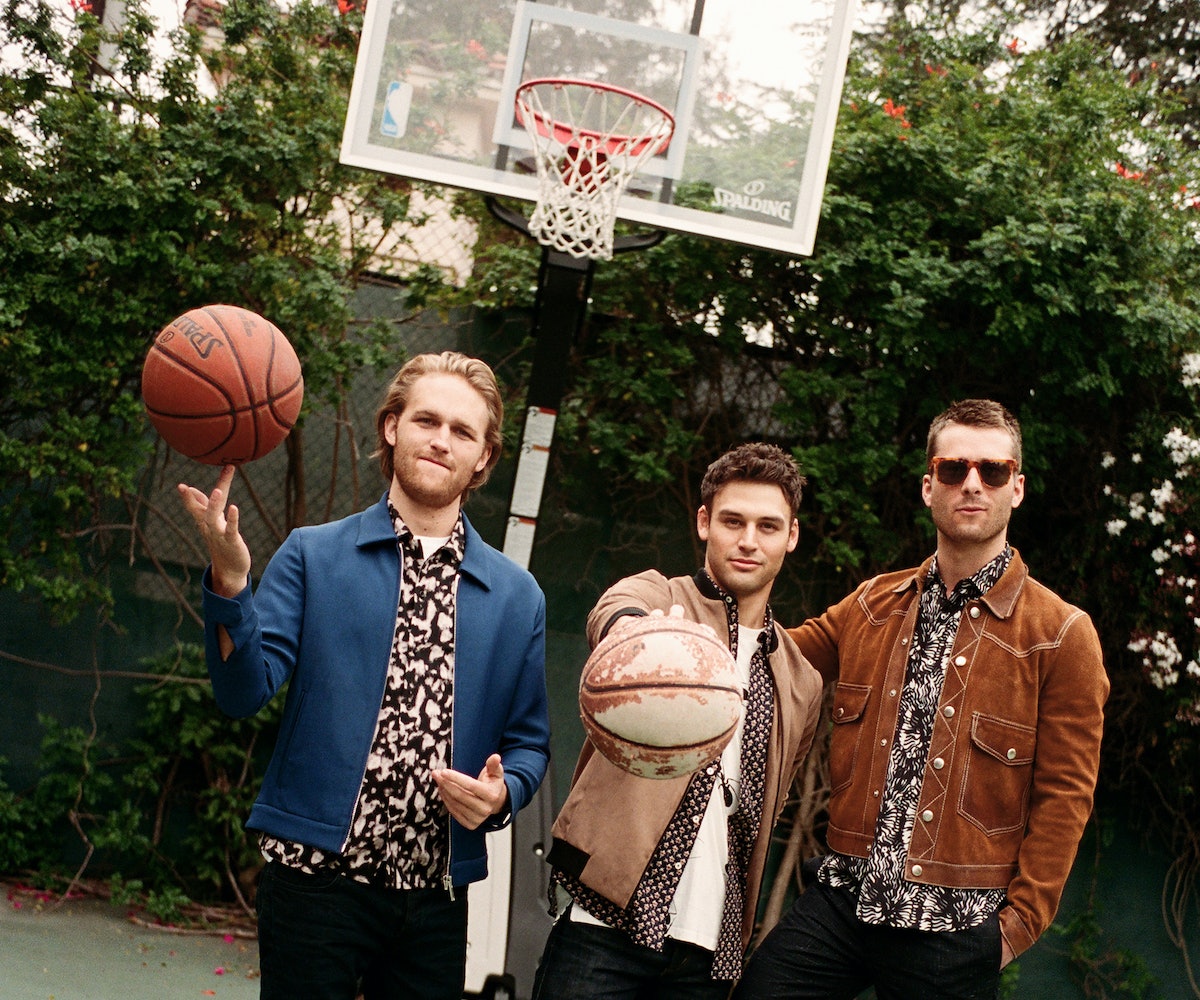 Photographed by Felisha Tolentino. Styled by Dani Michelle.
by Lisa Butterworth
May 17, 2016

“Today is legitimately the first day where I can just sit here, smoke a cigarette, and I don’t have to do anything,” Wyatt Russell says. He’s talking about enjoying his newly fixed-up house in Austin (where he lives when he’s not in L.A. for work), but he may as well be talking about his work schedule. The 29-year-old former pro hockey player has been pretty damn busy since a hip injury took him off the ice and into the family business (Kurt Russell and Goldie Hawn are his parents; Kate and Oliver Hudson are his half-siblings). After memorable roles in Judd Apatow’s This Is 40 and 22 Jump Street, he’s now playing a tie-dye-wearing, herb-toking, Carl Sagan-quoting baseball player in Everybody Wants Some. And with the Anna Kendrick wedding dramedy Table 19, comedy Folk Hero & Funny Guy (in it, he gets to play guitar—another one of his talents), and the sports comedy Goon: Last of the Enforcers on deck, he better enjoy that smoke break while he can.

I didn’t go to acting school. I found out who I was by playing hockey. I came from a place where you’re micromanaged from the time you’re 12. When I started acting, I was like, "Fuck that, I’m gonna go down in flames doing it my way, and if I suck, I suck, but I’m doing it the way I want to do it."

I like working with wood and building guitars. I also enjoy going on hikes with my dog, a white husky named Snowman. He’s the man.

I don’t know if I’m at sex-symbol status. If people want to call me that, great, thank you for thinking that my parents made a pretty person. But looks are the first thing to go, if you’re lucky, so it’s just a world of disappointment if you put all your eggs in that basket.

“You won’t hear me complain about working with too many women,” 28-year-old Ryan Guzman says on the phone from Atlanta, where he’s filming a TV pilot. But after parlaying a modeling side gig into acting jobs, and supporting J.Lo in the steamy thriller The Boy Next Door and the ladies of Pretty Little Liars and Jem and the Holograms, he finally got to play opposite dudes in Everybody Wants Some. “It’s kind of like Vegas: What happens there, stays there,” he jokes about the set’s party vibe. While Guzman swears his flirty character Kenny Roper is way more of a player than he is, the athletic part of the role wasn’t a stretch for the Texas-born, Sacramento-raised former baseball pitcher. And neither was the cast’s on-screen bond: “We all feel like we’re brothers,” he says.

I had $27 to my name when I came to L.A. Next thing I knew, I was flying out to Colombia for this horrible foot deodorant commercial. It was god-awful, but it paid enough, so I was like, “Let’s do it!”

If you can’t afford acting school, then you make your own. I’d download scenes from movies and act them out. One was from—I’m gonna call myself out—The Notebook, the breakup scene. I used it to get my manager!

When Glen Powell heard that President Obama was going to be at SXSW in March, he decided to reach out to the White House and invite POTUS to the premiere of Everybody Wants Some. This seems to be classic Powell: dreaming big and living life totally balls-to-the-wall. The 27-year-old Austin native has been stealing scenes in everything from The Expendables 3, as a young, highly trained mercenary, to Scream Queens, as campy frat boy Chad Radwell. Now he’s a mustachioed college baseball player in the “spiritual sequel” to Dazed and Confused, which, he declares, “is so frickin’ good.”

I got into all sorts of trouble as a kid. I was big on pranks. I released 3,000 crickets in my middle school hallway, then three stink bombs simultaneously throughout the school—it was a rad day.

Dancing is in my blood. My mom and I used to go to [Austin saloon] The Broken Spoke to two-step. I’d get a chicken fried steak there and dance it off. Nothin’s better. All the Powells are big dancers. Give us a band and a dance floor and we’re the first people out there.

My bucket list is extreme. I met some Navy SEALS [while filming the upcoming Iraq war drama Sand Castle] and they’re taking me to jungle warfare school soon, and later this year my crew is going to get shot at with AK-47s, while wearing bulletproof vests.