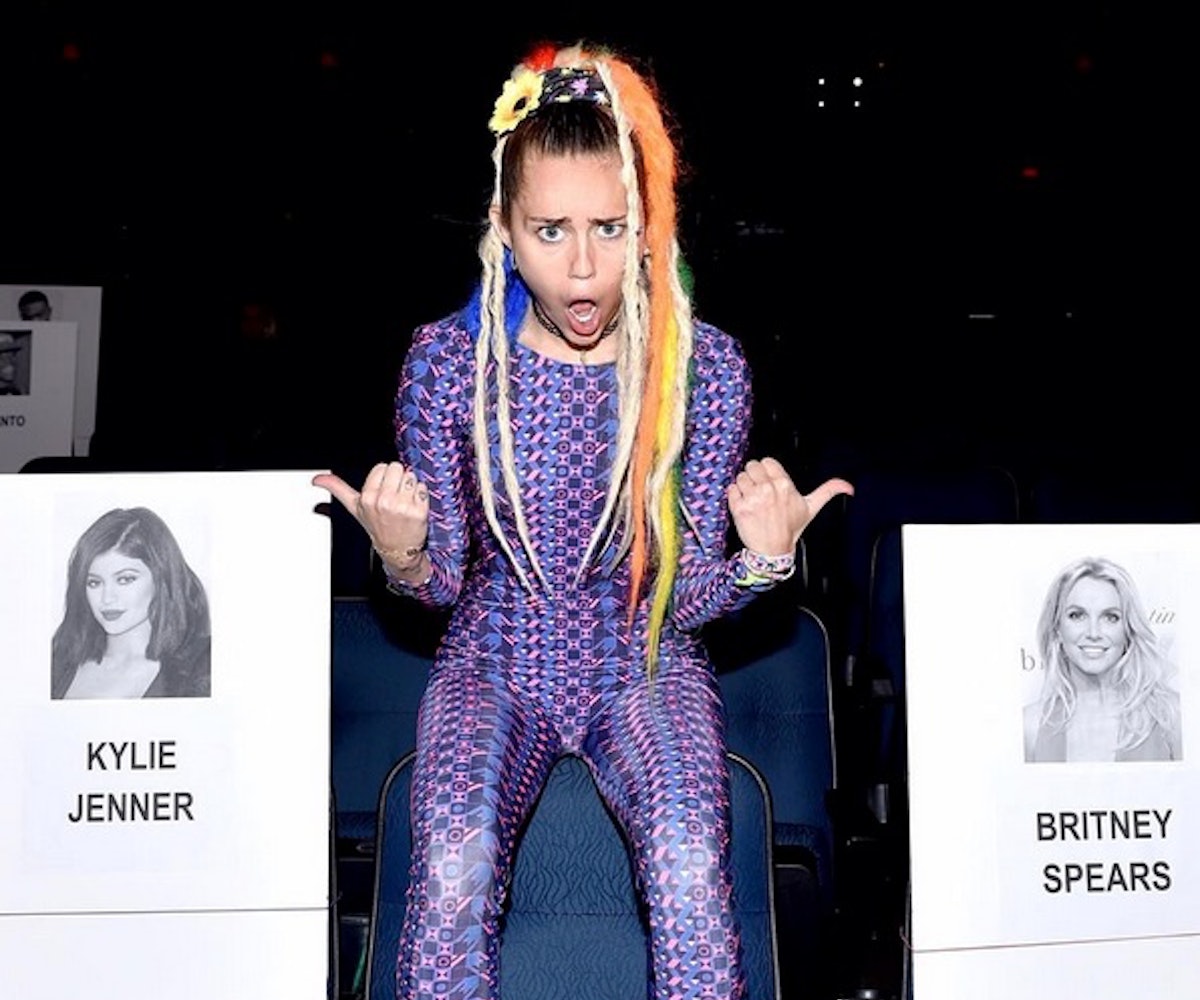 Unless you've been living under a rock without WiFi or 4G, then you probably know the MTV VMAs are going down this Sunday in Los Angeles. Unlike VMAs of years past, the lead-up to this year's show have been filled with intrigue, from speculation as to what host Miley Cyrus will do to put her own technicolor tongue stamp on the ceremony, to drama being stirred up by Miley, Nicki Minaj, and Taylor Swift. The point is, no one really knows what's going to happen, but it's always fun to guess. So in the spirit of both fun and guesswork, here are 10 very accurate predictions of what will happen at the 2015 VMAs.

1. Seth Rogen and his crack team of writers are responsible for Miley Cyrus' opening bit, so expect jokes about getting super baked. Call it a hunch.

2. Nicki Minaj, Taylor Swift, and Miley Cyrus will come together on stage and laugh at us all for running with their fake feuds. To them, the Twitter beefs were a social experiment—a means of trolling us and our incessant need for d-r-a-m-a. Together, as Miley puffs on a joint, Nicki sips real tea, and Taylor goes around inviting all the women in the audience to their stage, they will raise a collective middle finger to the media world as it swiftly finds different angles for various thought pieces. From the speakers above, Beyoncé's voice will shout, "Who run the world?" "Girls," we will all whisper, instinctively.

3. Upon receiving his Video Vanguard Award, Taylor Swift will rush the stage before Kanye West can finish. The audience will have a laugh, but they all know that joke's longevity ran out after last year's Grammys. Kanye will then give a nice speech and dedicate it to Kim Kardashian West and North.

4. Miley Cyrus will somehow find a way to bring The Flaming Lips' frontman Wayne Coyne on stage. Young Twitter will have no idea who this man is. Some might wonder why Tim Burton attended the VMAs. The rest of us will shake our heads and shame our nation's youth.

5. Justin Bieber is performing his catchy new single, "What Do You Mean," for the first time, and will remind everyone that he's actually, you know, a pop star.

6. Twenty One Pilots will absolutely slay it in their performance alongside A$AP Rocky, making us feel like absolute morons for not knowing who they were.

7. The camera will cut to Taylor Swift dancing, except Taylor Swift will not be dancing. She will be sitting like a stone, motionless, and scientists around the world will spend centuries trying to figure out why (she's just tired from all that touring, guys!).

8. Miley, Demi, and Selena will recreate Britney, Madonna, and Christina's infamous '03 performance. With Miley hosting, things are bound to get a little, er, interesting. The network has already announced that former Disney star Demi Lovato—who's "got a taste for the cherry"—is performing, and Selena has new music, so why wouldn't they take the opportunity to bring that "Like A Virgin" performance back again in today's landscape?

9. Adam Sandler will drag his sloppy, comedy-murdering carcass onto the stage, make a gagging Billy Madison reference, do that decades-old giggle, "Say okay, okay," in that meeching quiet-the-crowd-but-in-a-sweet-way bit, then plug the four-movie Netflix deal he doesn't deserve and I'm sure they're deeply regretting. While everyone in the audience checks their phone, Mr. Gilmore will introduce Best Video Game Soundtrack, and we'll all collectively die.

10. And finally, Britney Spears and Kylie Jenner will be sitting next to each other. Wild guess.