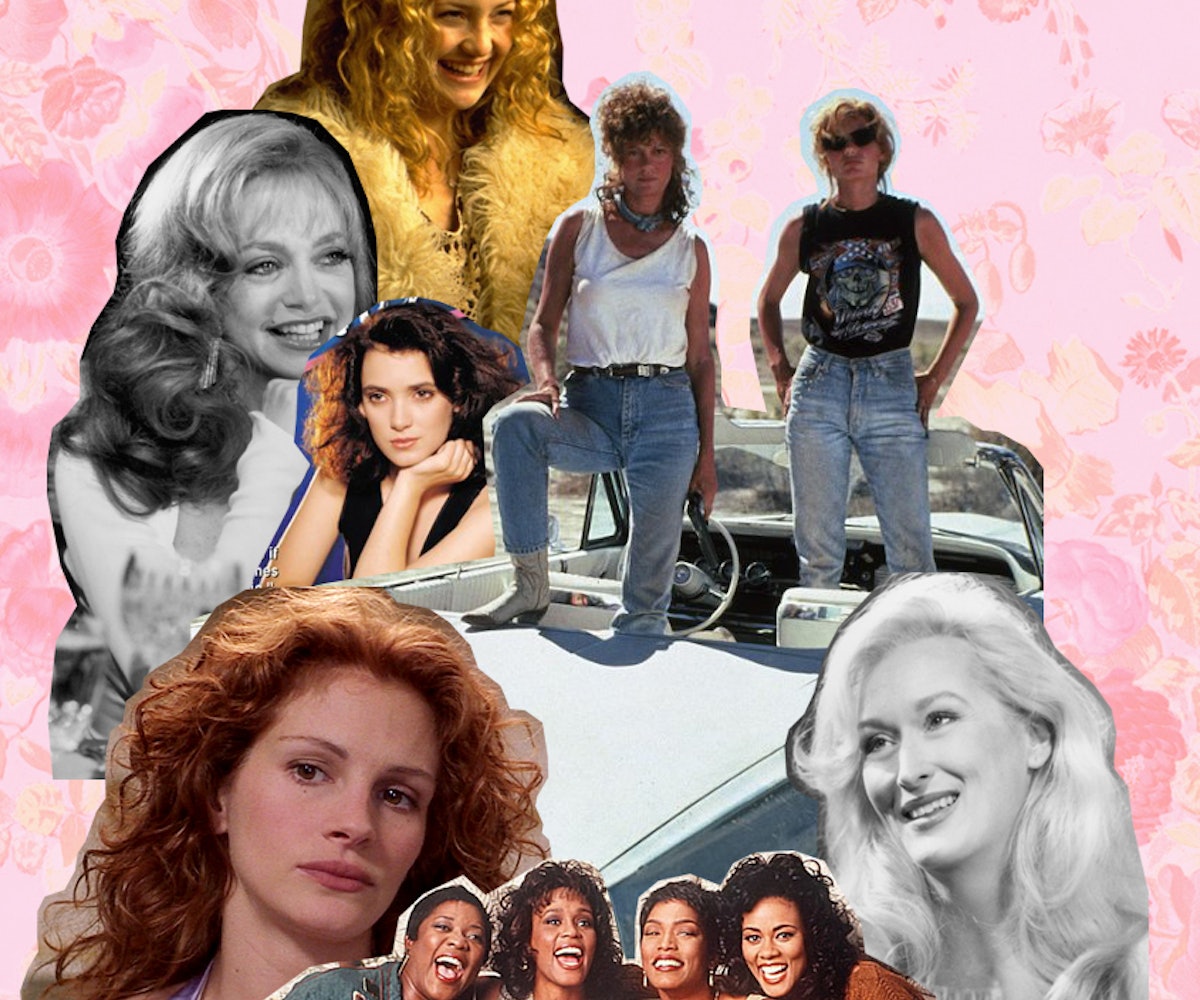 For some reason, society tells us that in order to live a whole, happy life, you need a significant other to complete you. And although the wide world of cinema explores nearly every imaginable facet of humankind and fantasy, it plays up the idea of romance where the two characters always seem to find love and a "happy ending." Don't get us wrong—it's always great to have a partner in crime by your side as you navigate your way through life, but you don't need one.

a life partner on National Singles Day (11/11). And while it may seem natural to celebrate independent men and women on the day of physical "ones," when dreams also supposedly come true, the United States has no such day. Instead, we like to cherish single guys and girls every day. And sometimes, we like to hold a massive movie marathon celebrating our favorite ladies that

to live the single life. Ahead, see what's in our queue.

Up until this point, the road trip movie was an inherently masculine genre. But the enduring love and friendship between these two fugitives is much stronger than any of the men they encounter, even though Susan Sarandon's Louise gets a marriage proposal mid-movie. The two would rather die together as free friends, literally leaving men chasing them in their wake.

This film, for the record, is billed as a romantic comedy, though there is really nothing romantic about it. Julia Roberts is essentially conniving and manipulative, and instead of being forthright with poor Dermot Mulroney, she decides to lie, con, and sabotage. In the end, when she finally comes clean, the audience is expecting them to run off together, which they do: to find his poor fiancée. In the end, single Roberts wishes her best friend good luck and gets to dance with the gay dude.

Yes, this is the self-empowerment movie to end all self-empowerment movies, and for good reason: Each of the four leads is powerful and beautiful, and they all cut loose the men who've been holding them down. After decades of women being reduced to one-dimensional sketches, it's the guys' turn. The freedom and joy each woman encounters as she goes through life, are what Lifetime-style movies are made up of.

Yes, both Meryl Streep and Goldie Hawn spend their time fighting over their man (a very shabby Bruce Willis.) But the feud is so much less about getting the dude and more about their overdramatic but still pretty relatable rivalry: Who is prettier, who is more successful, and—the point of the movie—who looks younger? In the end, they are stuck together, because, well, they deserve one another.

The love story between Beatrix and Bill is complicated, abusive, and terrifying. But deep inside, there was a strong, enduring love between the two of them. When the plot reveals that there was a massive misunderstanding between them, Beatrix has the ability to forgive him, mend her family, and live united. Except, this is a story about revenge, and Bea set out to kill Bill, and damned if a "happily ever after" ending will get in her way.

On the surface, this Kevin Smith movie could be read as problematic, especially because the lesbian love interest ends up falling in love with a man (echoing Jason Lee's character's sentiment that she just needs a "deep dicking.") But by assuming his formerly lesbian girlfriend is down for anything after finding out she is more sexually experienced than him, Ben Affleck ends up not listening to his partner when she repeatedly says that she just wants him. And in his stupidity, he loses her, and she chooses not to "be his whore." Props.

Yes, Merida is very young, but the entire movie kicks off with her father trying to find her a suitable partner. The point? There isn't one, and Merida's most important relationship is the complicated and very real one between her and her mother. No princes, no rescues—just a young girl struggling to prove that she is becoming a woman.

What makes Kate Hudson's Penny Lane such a badass is the fact that she actually gets over her love for Stillwater's guitarist Russell Hammond when (throughout the entire movie) we don't think she can. We love the ending when William Miller is interviewing Russell, and Russell says, "You know, I think we both wanted to, uh, to be with her. I guess she wanted us to be together." Penny, you rule.

I don't think any of us really expect Enid to stay with Seymour forever. But we probably did think that that Enid and Rebecca would stay friends past high school. Normally audiences are meant to feel sad when main characters don't end up together, and usually those characters are a man and woman who are romantically linked. This time though, we're super bummed when two of our favorite BFFs kinda become frenemies.

is one of those films that absolutely has to appear in this list because almost none of the main characters end up with any men. Katherine denies the men in her life, Betty divorces her husband for cheating on her, and Giselle is basically super independent the entire film. Connie is the only one who ends up with a guy, but we're pretty sure they break up sometime in the future if her friends have anything to say about it. Girl power!

A la the latest Taylor Swift video, "Blank Space," the main character in

, Bliss Cavendar finds out that her love interest cheats on her and wastes no time burning the jacket he once gave her. Not only does she "not get the guy" by classic movie standards, but her roller derby team also doesn't win first place in the film's ending championship match. Most moviegoers might see this as a lose-lose, but we see it as a realistic.

When it turns out that your current love is a destructive sociopath who tries to kill you and the rest of your school, you're probably going to ditch them. But that doesn't mean it's an easy decision—especially when you did technically have something to do with his first kill.

Breakups suck, but sometimes parting ways with your rockstar ex can be the best thing that ever happens to you. In Gretta's case, she befriended a former music exec, recorded an entire album, and found happiness being independent. Talk about sweet revenge.

High school can be the best years of your life or the worst years of your life, and high school reunions are undoubtedly some of the strangest few hours you will ever spend on this earth. And although you think that you'll have your life totally sorted (whether that be by establishing a successful career or family) by then, life doesn't always work the way you expect it to. Even though Romy and Michele may not have husbands and a family like the once-popular mean girls do, they have each other. And to be honest, that's a lot more fun, especially when it comes to executing elaborate dance routines.

In Alien 3, Sigourney Weaver’s Ripley starts out the movie alone and, in her way, ends it alone. Though threatened by either convicts or a big, greasy xenomorph, she’s never truly at a loss as she was in previous films. Moreover, she internalizes the problem that the big, big, greasy xenomorph presents, owns it, rallies a bunch of prisoners to fight it, and, in a weird way that we don’t want to spoil, conquers it. Oh, and she looks so good with a shaved head.

What was marketed as a macho post-apocalyptic desert romp complete with muscle cars, steroids, and Tom Hardy on overdrive, actually turned out to be surprisingly feminist statement. The real hero of the movie wasn't Hardy's Max Rockatansky, but instead it was Charlize Theron's one-armed warrior Imperator Furiosa who saved the day by freeing a group of enslaved women and bringing them to The Green Place of "many mothers." Furiosa, an instant iconic action hero, is in talks of getting her own sequel. Yes, please.

Alicia Vikander gave one of the most haunting performances in recent memory as Ava, an artificially intelligent (and gorgeous) robot who seduces a helpless programmer (Domhnall Gleeson), not because she wants to experience human love, but because she wants to get out of prison and see the world. Machines are meant to be used, sure. But here, Ava is the one doing all the using. We won't spoil the movie's ending, but be prepared to scrape your jaw off the floor.