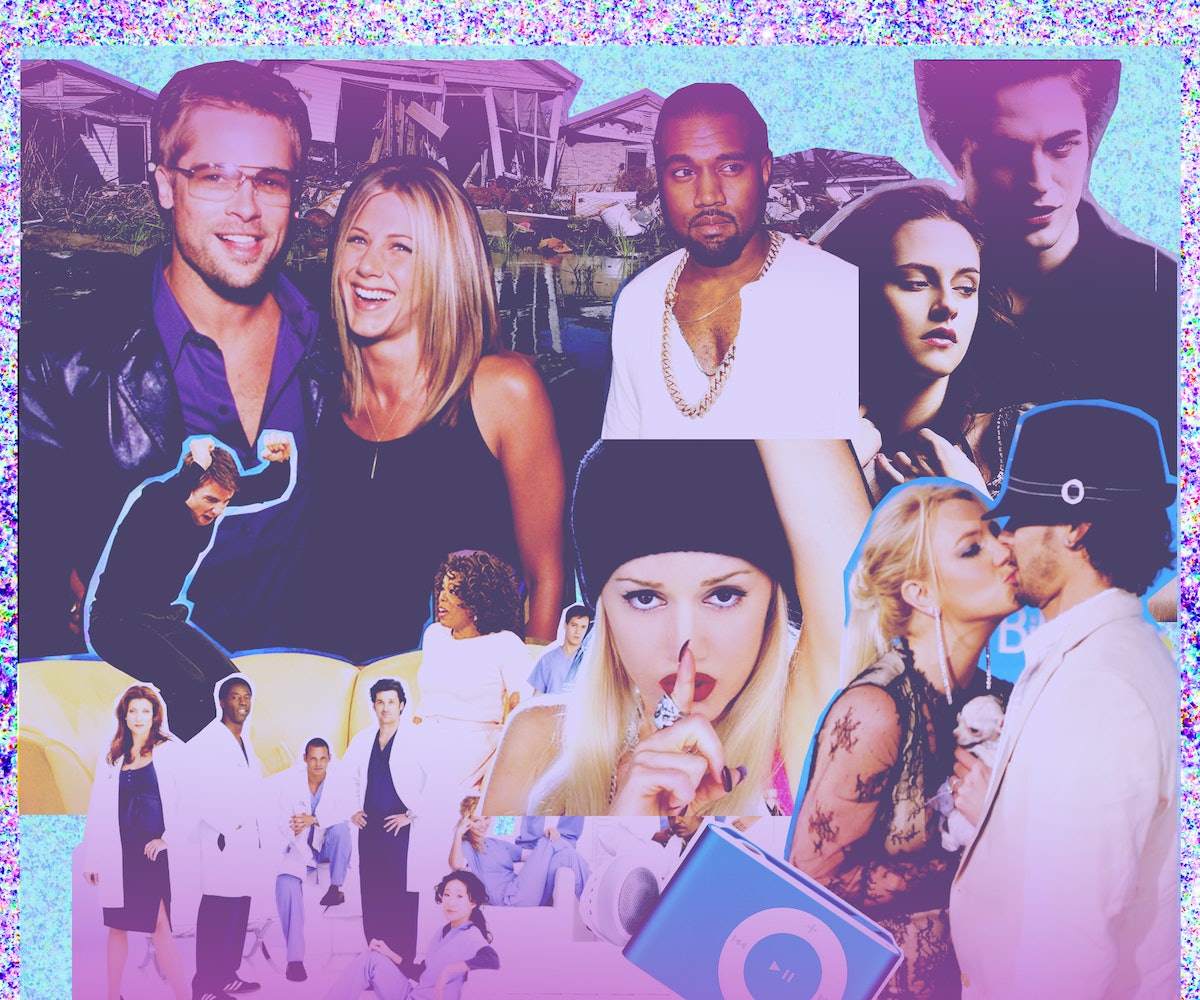 You may still hold your Von Dutch trucker hat near and dear, but it might be time to leave the aughts behind (ugh). But before you do, click through the gallery and revisit the top 15 pop culture events that turn 10 this year. Because 2005 was a weird, wonderful time, and we're celebrating it.

By now, you've all seen The Social Network and know the general story of how "The Facebook" came to be: It started exclusively as a networking site for Harvard students (with "coveted" @harvard.edu e-mail addresses) and then opened up to us non-Ivy Leaguers in 2005.

To celebrate: Poke all of your friends (who are, let's be honest, just minor acquaintances at best).

In the words of our Photo Director Beth Garrabrant, "It's the truest love story of our time."

To celebrate: Put on your sweatpants and take off your bra.

The squealing women, the fist thrusts, the incoherent babbling: the world finally saw the more, err, eccentric side of Tom Cruise. And oh, he tried to wrestle Oprah.

To celebrate: Put a blanket down on your couch and re-enact the entire thing. Let your freak flag fly.

10 years ago, the world was given an insider's look into the Z-Boys. Then, everyone ran out and bought a ticket to Venice Beach and a skateboard.

To celebrate: Take full advantage of your (or your neighbor's) empty pool and teach yourself some moves.

Somehow Apple convinced us all that not only was it okay for us to pay for a device that only held 100 songs, but they convinced us that it was all in the name of spontaneity. Well played.

To celebrate: Open up your iTunes library and listen to your least favorite 100 songs.

A decade ago, Gwen Stefani premiered one of the only songs that you will never get sick of, no matter how many times the radio tried to kill it.

To celebrate: Tuck your tank into the bottom of your bra and terrorize your local grocery store. Don't forget to grab some bananas on your way out.

Ahh, the book that rocked the nation's hormonal youth to its core and inspired another series (Fifty Shades of Grey) that did the same.

To celebrate: Hop on your s.o.'s back and wait for him/her to start flying.

Apparently Seattle hospitals are very volatile and emotional places. Thanks, Shonda Rhimes for teaching us that.

To celebrate: Rewatch the series, but only until season 4. Things started to get a bit farfetched after that.

This Judd Apatow film introduced many of us to Steve Carrell, and it's kind of hard to imagine TV/film/life without him.

To celebrate: Get a wax, scream "Kelly Clarkson," terrify your waxer in the process.

Everyone thought this U.S. adaptation of the British hit would tank, but there's a reason it lasted eight years. And it wasn't just because of Kelly Kapoor's hilarious tidbits.

To celebrate: Plan some intricate Jim-like pranks on anyone you've ever come into contact with.

America's sweetheart couple separated amidst rumors of infidelity, and it was the biggest news story for about five years.

To celebrate: Get over it.

If you haven't seen the movie, here's the premise: Two super hot assassins get married, have to hide their true professions, and then get hired to kill each other. Spoiler alert: They don't.

To celebrate: Take the family minivan on a joy ride.

One of the most destructive hurricanes of recent history, Katrina devastated the southern coastline, leaving thousands dead and homeless.

To celebrate: Donate to the Red Cross' Hurricane Recovery Program.

While urging NBC viewers to donate to those affected by Hurricane Katrina, Kanye West called out then-President George W. Bush's apparent lack of care and precaution. In West's words, "George Bush doesn't care about black people." It's an important political and pop culture moment. And Mike Myers' reaction was priceless.

To celebrate: Participate in the #BlackLivesMatter movement.

Ten years ago, one of YouTube's co-founders uploaded a video of him at the zoo. Today, YouTube is arguably bigger than TV, and your primary way of reliving all of the aforementioned events.

To celebrate: Watch this stupid video of a cat acting like it's on drugs.