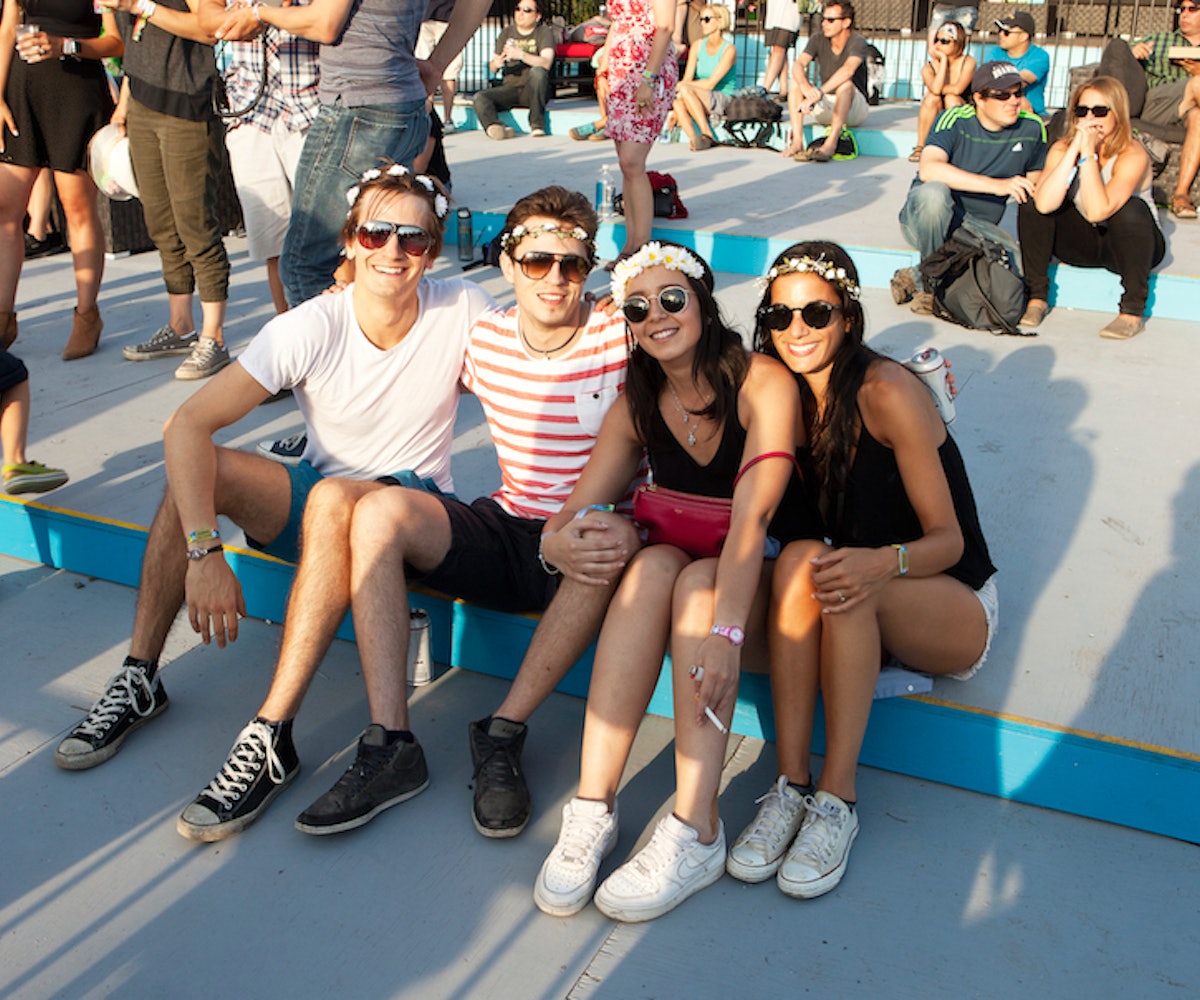 All photos by Aaron Wynia

This summer, whether you bought a ticket, scored a VIP pass, or just can’t stand the thought of Drake being anywhere you're not, you probably ended up at a music festival. That means you most likely stood in line, complained about your reception, and saw the following 17 things. And if you're lucky, you may have seen some actual music.

From pop-up Diesel Denim tattoo studios to the air-conditioned paradise of the Perrier Greenhouse, there’s no denying that brands have gone far beyond the bland billboards of yesteryear to really make their festival presence a tangible experience.

Before we had emojis to express ourselves, I kind of understood face painting. But now, it just looks like you fell asleep in the company of friends who have a sharpie.

Food trucks seem to be experimenting with what festival attendees won't pay for in 2015. You know you’re at a music festival when you’re holding a $7 slice of watermelon.

Music festivals have always encouraged free expression, which is why you can dress like an Internet meme just waiting to be named and no one will bat an eye.

With our waning attention spans, the need for constant stimuli at festivals has given birth to live art installations speckling the grounds and adding a bit of a Burning Man vibe to what’s typically a generic setting. I bet he calls this one, “I wish my phone hadn’t died.”

Tie-Dye, the trend that predates trending, still appears at festivals and makes heat-stricken ticket holders look like a melting bucket of Ben and Jerry’s.

The endless lineups for the bathroom. As soon as you find yourself in one of these, it dawns on you that your wristband is just a glorified pass to a porta-potty.

There’s one clinger at every concert. You know, the guy who got separated from his friends and has now decided to stick with you for the rest of the day, intermittently reminding you that he got backstage here six years ago?

Can you just rent burly dudes to carry you around at festivals now, or do you still have to befriend them?

The thing still redeeming music festivals are spirited youngsters like these ones that make every performance feel as fuzzy and sentimental as the last day of summer camp, instead of just a breeding ground for miserable Internet think pieces like this one.

As obnoxious as they seem, this cultural staple is actually less obnoxious than when people ask you to take their picture for them and talk to you as if you’ve never seen a camera phone before.

These colourfully mirrored sunglasses are exclusively reserved for festival security guards or dads who yell at their kids in public.

If you want to see what a human on life support looks like in the 21st Century, the phone-charging stations proliferating at music festivals are good places to start.

They opt to keep their shirts on, but just to let everyone know that later on they’re going to be the ones knocking your drink out of your hand and not noticing.

Yep, there’s a flock of them everywhere and they seem to whole-heartedly believe the only thing between them and a good time is a shirt.

Parents who are desperate to prove that having kids hasn’t affected their ability to party, it’s only made them slightly more irresponsible. Strollers with beer holders? Heyo.

The music festival is a rite of passage that helps us learn that valuable lesson, “Thou shalt not drink Four Loko before entering thine all-day party.” Once this faded festivalgoer raises his head out of his regretful arms, he will be a man.

NEXT UP
Entertainment
Soundcheck: The 10 Best Music Releases The Week Of May 9, 2022
Entertainment
Harry Styles' Music Video Evolution From "Sign Of The Times" To "As It Was"
Entertainment
Sky Ferreira Teases New Song “Don’t Forget”
Entertainment
Maneskin's "Supermodel" & 9 Other New Songs Out This Week