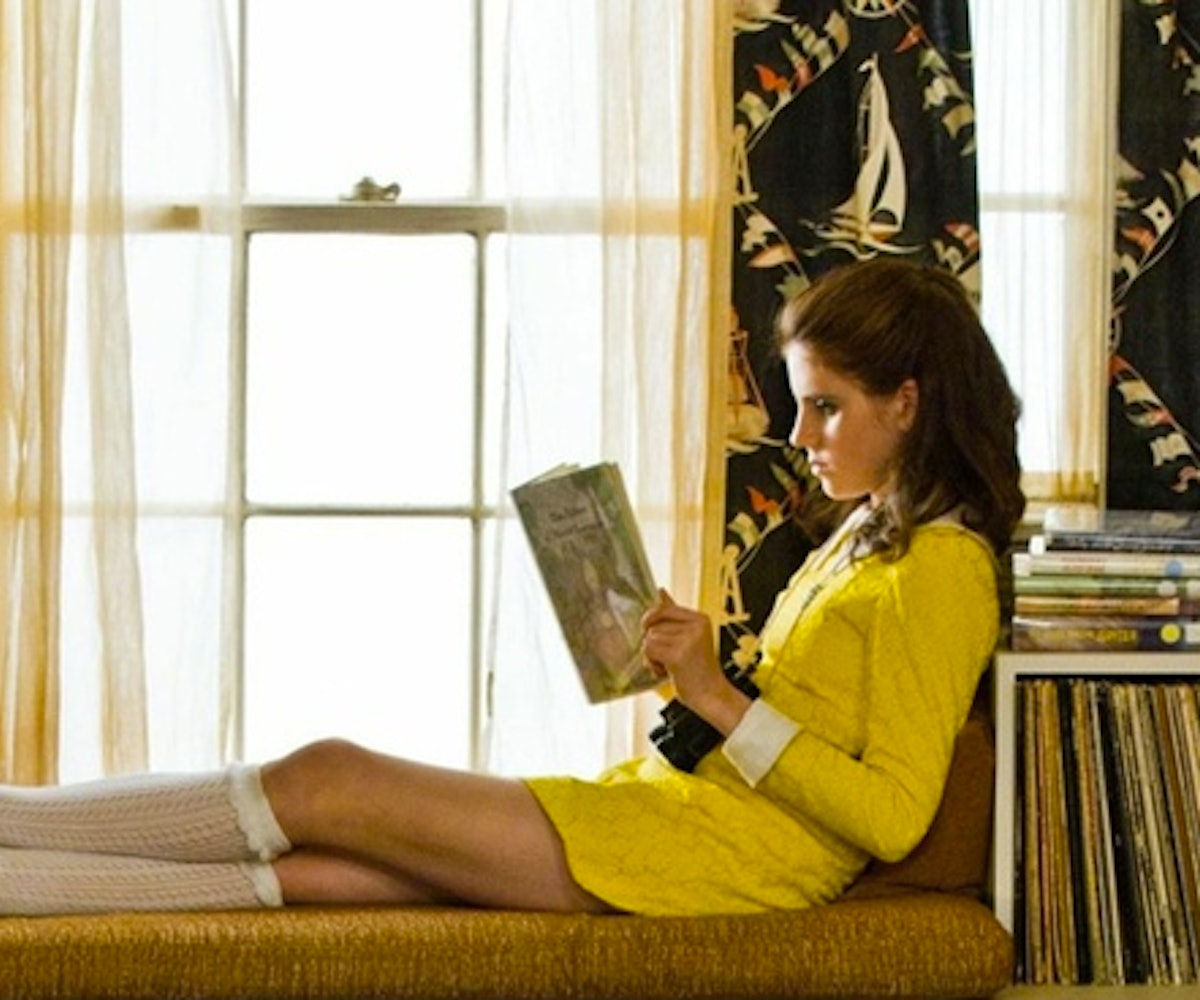 This year (let's face it, every year) was a complicated one to be a woman in America. There were undeniably exhilarating highs as we collectively watched the acheivements of women athletes at the summer Olympics; the glorious heights attained by young women like Simone Biles, Katie Ledecky, Allyson Felix, and Simone Manuel, to name just a few, inspired awe (and probably quite a few new parents to name their daughters Simone.) There were incredible women across artistic mediums, from front and center powerhouses like Beyoncé, who released the essential "love letter to black women" aka Lemonade, to behind the scenes players like the National Book Foundation's director Lisa Lucas, playwright Suzan-Lori Parks, and director Kelly Reichardt, who also all made news for their profound and impactful work. And, of course, it was a powerful moment imbued with great hope when we nominated a woman to be the Democratic party's candidate for President of the United States of America. So in many ways, it was a great year to be a woman in America.

Until, of course, it wasn't. It's hard to say what it would feel like if Donald Trump had not won the Electoral College vote and become President-elect. Perhaps if Trump had become but a footnote in history, an ugly asterisk marring the year, then we would be celebrating 2016 as being the most important one for American women ever. But, of course, there's no point in dwelling on a reality that could have been. Rather than celebrating 2016 as a year feminists could embrace, this became a year in which we were forced to confront the fact that millions of people in this country—significantly including a majority of white men and women—were comfortable with electing a leader who has bragged about sexually assaulting women and intends to reduce women's rights and access to important healthcare options. Trump's ascendance is a terrifying reality for untold numbers of Americans who are a part of marginalized communities, and it is a repudiation of progressive, equality-based values that so many of us hold dear.

Donald Trump's election and presumptive presidency, then, are why it's more important than ever for women to engage with the world around them and participate in dialogue pertaining to what is usually defined as women's issues. And while it is important to keep up with the latest news and to know what's happening on local, national, and international levels, it's also important to pull back a little and consume work which is static, rather than breaking, in an effort to gain better perspective on the difficult times within which we now live, and also to give us hope as we more forward into a future that might be troubled, but still has the opportunity of being reclaimed.

Here then, are 12 books that were published in 2016, which we think are important for every woman to read. They range in genre, from poetry to essay collection to historical nonfiction to a couple of works of fiction, but all address women's issues, which is to say that all address human issues, in a manner that is never less than profound and insightful, something we can all appreciate right now.

In this provocative book, Hustvedt explores everything from the historical way women have been treated by communities ranging from the medical (she writes fascinatingly about hysteria) to the cultural, as she looks into the way gender influences the way we consume different forms of art. Also, she investigates the mind/body cnnection as it pertains to desire and will. It's required reading for all women who live their lives under the oppression of the male gaze (that is, all of us).

All The Single Ladies by Rebecca Traister

Traister has been one of the most astute commentators throughout 2016 (her coverage of Hillary Clinton's campaign for New York magazine is essential reading) and she started off the year with the release of this excellent "investigation into the sexual, economic, and emotional lives of women in America." Through the lens of generations of female American power players, Traister explores and explodes the myth that women were passive players in the establishment of this country. Anyone who wants a handbook for dismantling the patriarchy should pick this up right now.

Tea's vital novel grapples with issues like addiction and sobriety, immaturity and adulthood, and, you know, the impending apocalypse. The important stuff! This beautiful fever dream of a book is so important to read right now, not only because of its inherently rebellious, even revolutionary message that there is no need to conform to a world that rejects us over and over, but also because Tea's compelling prose is a testament to the importance of storytelling—and of having women doing the telling.

Blackout: Remembering The Things I Drank to Forget by Sarah Hepola

In this brave, bitingly funny memoir, Hepola recounts how, for years, she lived with alcohol being "the gasoline of all adventure." What comes after she stops drinking is a powerful story of reinvention; essentially, of learning how to live again when all the things upon which you depended (or used as a crutch) are gone, and you need to find strength and support elsewhere.

Definitely one of the most brilliant users of social media with her account So Sad Today (which is also the name of a wonderful collection of personal essays she put out this year), Broder's Last Sext is a powerful poetry collection in which she deals with topics like the loss of love and the creation of the self. In "Lunar Shatters," she writes: "and me I dressed myself/ I made a poison suit/ I darned it out of myths." This, this, is the writing all women need in their lives right now.

This slim book stuns in its portrayal of the interior life of its anonymous narrator. It manages to be at once lucid and hallucinatory, a fine feat indeed, and a state of being which feels all too familiar at this particular time in history. As a reader, it is hard not to recognize yourself in the sharp, often witty observations of reality in Pond, and it is hard not to feel recognized in turn by this book, which is a rare and beautiful thing indeed. Reading this book feels like giving yourself permission to think wild, free thoughts, and live a correspondingly wild and free life.

The Fire This Time: A New Generation Speaks About Race by Jesmyn Ward

Ward's collection of essays, poems, and memoir all revolve around the state of racial relations in America today. It's comprised of some of the most lucid, searing writing on one of the most important topics of our time—truly an incendiary work.

Trainwreck: The Women We Love to Hate, Mock, and Fear, and Why by Sady Doyle

Outspoken feminist author Doyle gets to the heart of our society's centuries-old hatred of trouble-causing women, from Billie Holliday to Sylvia Plath to, yes, Hillary Clinton. Doyle explores just what it is that makes loud, messy women such a threat to men, and why it's so meaningful that all women continue to make men uncomfortable.

White Trash: The 400-Year Untold History of Class in America by Nancy Isenberg

This book isn't strictly about women, but it pertains directly to women's issues—after all, it's white Americans, including a majority of white women, who voted into power politicians who intend to strip away women's access to things like affordable healthcare. But also, in it, Isenberg reveals ways in which the American government has historically worked to oppress working class women, even through programs like forced sterilization. (This sort of thing happened to women of all races; please also read about civil rights hero Fannie Lou Hamer, who was forcibly sterilized in a procedure colloquially known as a "Mississippi Appendectomy.")

Comprising several long poems, Moschovakis' latest work deals with questions about who we are and what is the nature of love and promises and the existence of soulmates in a manner which makes me—to put it bluntly but also, I hope, softly—want to bathe in the text. This is a thing, isn't it? Wanting to actually immerse yourself in the words you see placed on a page? Perhaps, or perhaps not. No matter, because I cannot swim in these words, except in my mind, where they've lodged quite completely. I think other readers will find themselve similarly drawn into this work, and all the better for it.

I'll Tell You in Person by Chloe Caldwell

Caldwell's hilarious, honest writing about the kind of things that so many women keep hidden—drug use, acne anxiety, failed relationships, flailing careers—is so necessary to read right now, and always. Caldwell relates her life experiences in a singular voice filled with wit, frustration, intelligence, and empathy—it's that last part that's of particular importance, really. It's rare enough that young women and their choices are treated with any kindness or level of understanding by society at large, and Caldwell is not only unsparing in recounting the darkest parts of her life, but she makes it possible to see that you can be okay with yourself and the life you might always be figuring out how to live, because everyone fucks up sometimes and somehow. It's a powerful message, one we could all use right now.

Galchen's book is a compilation of meditations—in the form of lists, brief observations, stories—on babies, motherhood, womanhood, and literature. It's a provocative and sometimes unsettling look into what is commonly thought to be a placid and sweet part of life, and it's important for its willingness to subvert any of the tropes about new motherhood and how women should and shouldn't feel about it. In a time when women's rights with regards to whether or not they should have a say in how they care for their bodies in jeopardy, Little Labors is a truly essential read.