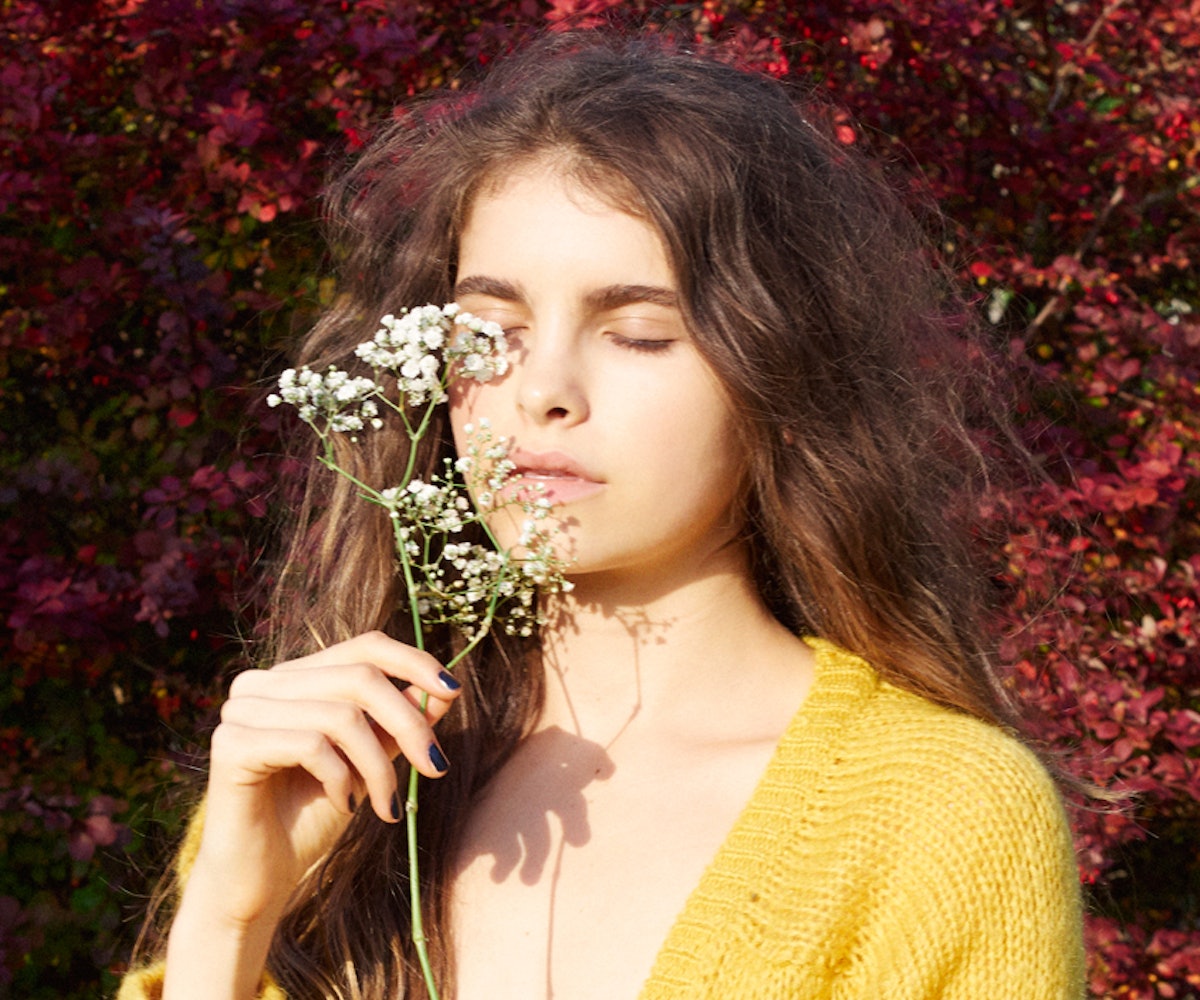 Last year was an interesting time for skin care. We found ourselves looking to new products, unexpected ingredients (what's up, snail slime) and unfamiliar routines. Argan oil had its moment in the sun; Korean beauty products (and their formidable 17-step regimens) made their way into Western medicine cabinets; and as BB creams filled the shelves of drugstores and Sephora, it suddenly became easier than ever to sport SPF on the regular.

That being said, it's a new year, so we wanted to see what 2015 might have in store for our skin. We checked in with three experts: Dr. Tasneem Bhatia (a.k.a. Dr. Taz), a board-certified physician helming a holistic and integrative medicine practice in Atlanta; Dr. Janet Prystowsky, a New York-based board certified dermatologist, and Dr. Craig Kraffert, a California-based biochemist-turned-dermatologist and president of Korean skin-care line Amarte. Here’s what these skin-care pros predict will be making it to our vanities and nightstands soon.

Turns out, that kombucha we’ve been chugging might be beneficial for more than just our digestion (or looking cool in the Whole Foods check-out line). Dr. Taz tells us that probiotics are making their way out of refrigerators and into medicine cabinets. “The thought here is that you’re providing a bacterial source to the skin that corrects the skin’s pH,” Bhatia tells us. “Also, when food ferments, it produces acids that act as a little bit of an exfoliator.” Try it in EmerginC’s Kombucha Cleanser ($34), Sulwhasoo's Snowise EX sheet mask ($130), or in Fresh’s Black Tea line ($48-$95).

So many trendy skin-care ingredients have a certain glamorous appeal—after all, who wouldn’t want to slather crushed pearls or diamond dust on their face? But this up-and-coming ingredient has slightly more humble roots: It comes from the dirt. Specifically, decomposed organic matter in the soil. “This is another potent exfoliator, perhaps even better than glycolic acids,” Bhatia tells us. “I suppose you could call it ‘the new acid.’” Though fulvic acid has roots in Eastern homeopathic medicine, Western scientists have recently explored the ingredient’s role in treating acne, eczema, and psoriasis, in addition to its possible anti-aging properties. Check out the Fulom skin-care line for a range of cleansers and moisturizers ($22-$30) that pack a high concentration of the stuff.

2014 was a banner year for oils: We dutifully greased up our faces (and our teeth) with coconut, we forked over $50 for a little more than an ounce and a half of argan, and overall, we became a little more open to the idea of coating our skin in these slippery potions. While argan and jojoba oil led the pack in 2014, plenty of other plant-based oils provide their fair share of benefits. Not that it’s anything new: Many of these now-trendy oils have had their place in medicine and beauty regimens for centuries. “As the world narrows a little bit, a lot of Asian and Middle East beauty practices are finding their way into our skin care,” Bhatia says. She cites flaxseed oil, which she posits may be “the new emerging oil for 2015,” for its anti-inflammatory properties and ability to soothe dry skin. Even large, mainstream dermatology companies are turning to ingredients like sandalwood, which is the active ingredient in Galderma’s Benzac Acne Solutions ($14-$16).

Meanwhile, Dr. Janet Prystowsky points to chia seeds as another potentially nourishing elixir. “The oil supposedly has the highest concentration of omega fatty acids of any plant source, and is rich in antioxidants and essential minerals,” she says. Check out chia seed serums from MayaChia ($59) or Perricone MD ($75)—even noted “cosmetics cop” Paula’s Choice has good things to say about the stuff.

Can silk make our skin as soft as, well, silk? Dr. Craig Kraffert thinks so. Kraffert, who started out as a cell biologist, points to the cellular structure of silk fibroin as its most intriguing quality. “Silk is very interesting in a lot of ways,” he says. “When you look at it under the microscope, it’s like a micro-sponge. So when you put silk on the skin, and you have ingredients mixed in, over time the ingredients leach out [of the silk] and the toxins leach in.” Kraffert also mentions the ingredient’s bio-active silk peptides, shown to stimulate epidermal cells and fibroblasts (the connective tissue cell responsible for making collagen). “So, you can put things into a silk powder matrix, and they’re slowly absorbed into the skin, while the silk is slowly absorbing things that you don’t want on the skin.” Based on this research, Kraffert’s skin care line, Amarte, has developed their Overnight Express Therapy Sleep Mask ($79) with silk as an active ingredient. The mask should begin to hit U.S. shelves by May of this year, and Dr. Kraffert expects other lines to follow suit. “Silk is coming, we’re bringing it, and I expect to be seeing a lot more of it,” he says.

The Pop Rocks of citrus fruit, caviar limes (otherwise known as finger limes) have been in the spotlight before. But only recently have these curious little fruits—and their natural exfoliant properties—captured the attention of cosmetics experts. “Inside the fruit are small, caviar-sized capsules which contain alpha hydroxy acids,” Dr. Prystowsky says. “These improve desquamation [the shedding of outer layers of skin], thereby decreasing dead skin cell buildup on the surface of the skin.” The LimePearl exfoliating agent was developed by Lucas Meyer Cosmetics fairly recently, so expect to see that ingredient popping up in products in the near future.

Okay, so retinol itself is nothing new: It’s one of the most revered and scientifically-backed anti-aging ingredients on the market. But now, Korean scientists are working on making a good thing even better. “The Koreans are broadening the envelope with retinol by figuring out how to nano-encapsulate it,” Kraffert says. In layman’s terms: basically, making it really, really, really tiny. We guess size does matter. The result, Kraffert says, is a retinol product that’s “not as irritating, it’s more stable, and more slowly absorbed. Basically, they’re making it more efficacious while diminishing its irritancy.” Amarte’s Wonder Cream ($102) offers the technology, as does Serious Skincare’s A-Force XR Nanoencapsulated Retinol Serum ($32).

Goji berries are so 2014, y’all. This year, it’s all about mongogo, manula, kegelia, baobab, and moringa, to name a few. Dr. Prystowsky clued us in to these “cosmetics superfruits,” which skin-care companies like Katavi Botanicals ($49-$59) are using in extract form. Katavi claims that kigelia, their signature ingredient, “has been shown to promote the appearance of enhanced density and elasticity.” While Katavi’s entire line of products revolves around these five ingredients, they aren’t the only ones pushing the power of the fruits. Moringa seed extract has shown up in products like Clarins's One-Step Gentle Exfoliating Cleanser ($35) and Maybelline’s Clean Express make-up remover ($5.99), and you can find kegelia extract in Clarisonic Opal Anti-Aging Sea Serum ($65) or Philosophy’s Full of Promise Treatment Duo ($75).

No, not this kind. Skullcap, a member of the mint family native to East Asia, is nothing new: it’s been used as a kind of panacea in herbal medicine for over 2,000 years. But skullcap extract might hold some pretty incredible benefits. While the medical properties of skullcap hasn’t been clinically investigated, Dr. Kraffert says that the ingredient is gaining a foothold in cosmetic circles for its antioxidant and anti-inflammatory effects, in addition to tyrosinase inhibition (a.k.a. skin brightening). Kraffert also mentions the very interesting possibility of skullcap’s potential anti-cancer properties, thanks to its ability to impede the production of melanin, which explains why his company is utilizing it in their Ultra Veil Sunscreen ($45). You can also find skullcap root extract in Clinique’s Turnaround Concentrate Radiance Renewer ($46.50) and Bobbi Brown’s Intensive Skin Supplement ($72). Not cheap, but hey, if it means we don’t turn into Tan Mom by the time we hit our 40s, we’ll take it.