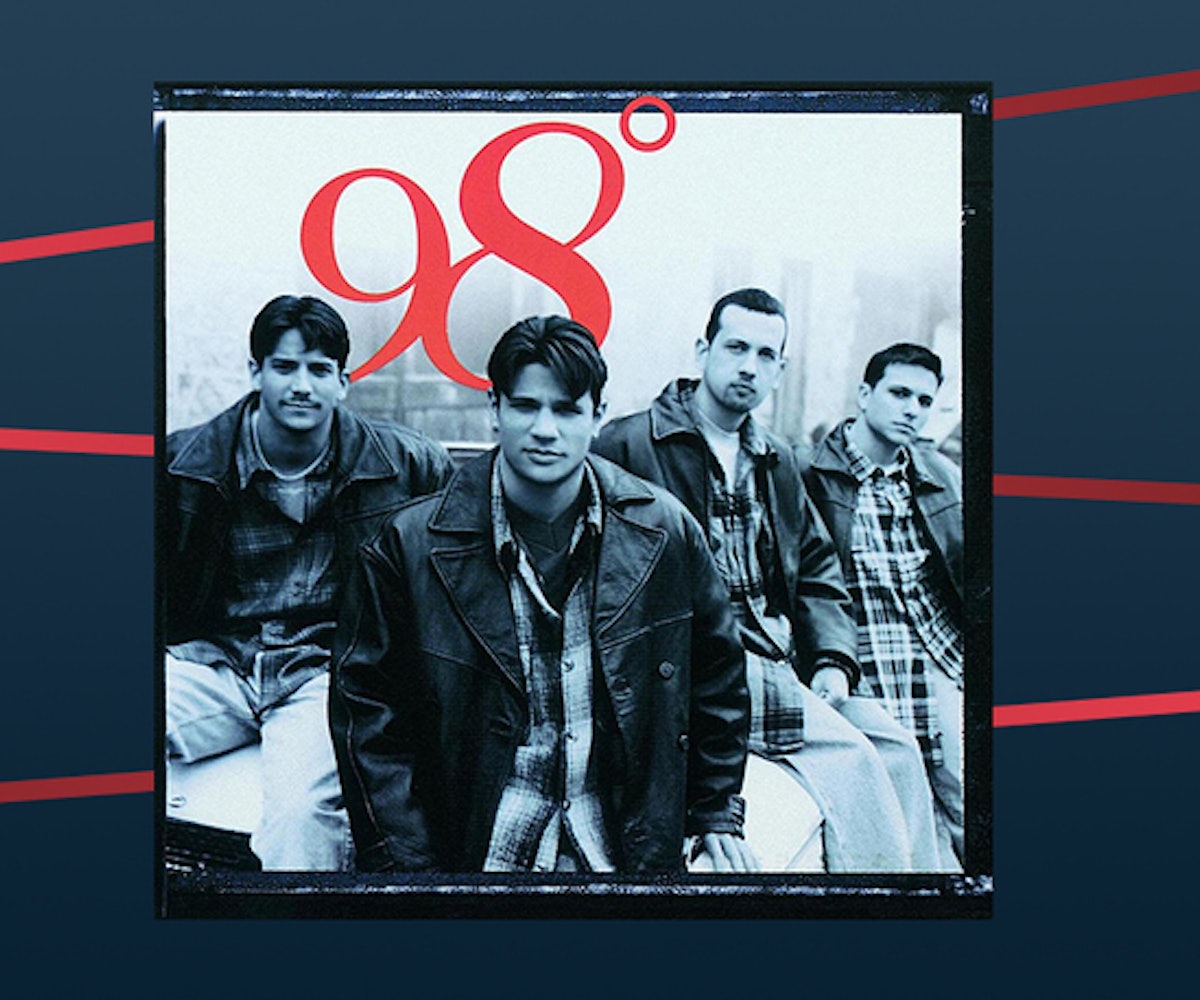 "Welcome to 98 Degrees," a smooth Champagne-tinged male voice emerges from amid a swelling of sensual strings, acoustic guitar, and chimes. The voice then invites us to "feel the heat" and "the passion," before reaffirming that this is, indeed, 98 Degrees, the L.A.-by-way-of-Ohio foursome we're listening to. "Are you ready?" he asks. "Are you ready, baby?" Boy, I don't even know. But I will get there.

98 Degrees released their eponymous debut album 20 years ago today. Throughout its 13 tracks are songs dripping in sex appeal, and evocative of dim lights, desire, and tender loving care. Though many rank them among the best pop boy bands of the '90s, 98 Degrees were more R&B than pop. Brothers Nick and Drew Lachey, Jeff Timmons, and Justin Jeffre boasted soulful vocals and harmonies akin to Boyz II Men. Unlike their pop brethren who alluded to cheeky hookups and innocent love, 98 Degrees, with their beefcake looks, were interested in mature themes. These boys didn't fuck, they made love.

While other boy groups of the era comprised members who clearly fit a variety of archetypes—the shy boy, the sporty boy, the daddy boy (hi, Backstreet Boys' Kevin), the playboy, and the good guy—all four members of 98 Degrees looked pretty much the same (after all, two were actual brothers). They were built like Abercrombie & Fitch models with a Midwestern charm that, when paired with the intimacy of their first album, beguiles a listener. These were the boys you could bring home to mom, but who'd also know their way around the bedroom and the body. (Listen to "I Wanna Love You" for proof.)

In that way, they were a little dangerous. They followed up 98 Degrees with 98 Degrees And Rising, a solid soul-pop sophomore album, but there was one glaring thing missing: sex. 98 Degrees toned down their carnal desires in songs like "I Do (Cherish You)" and "Because Of You." Eventually, as Timbaland's reign started to infiltrate the pop world, the band ditched their baby making vibes for Top 40-friendly songs reminiscent of everything else their peers were producing in 2000. The tracks became denser and layered with electronics, designed to get the listener dancing instead of engaging in some light petting. The mojo, you could say, was depleted.

98 Degrees didn't totally forego the bedroom anthems, though. As it was with every major pop album at the time, there were smooth ballads on their following albums that harkened back to their debut. "Always You And I" proved itself with its vulnerable confession of commitment; "Still" offered up a delicious mix of courtship and promise with a harp melody to boot. 98 Degrees were the kings of pop ballads, which made their slow jams the highlight of each album.

Revisiting their debut, however, is a genuine trip into what could have been. All four members shined with rhythm, blues, and soul. They made tenderness sexy and sexiness tender. The material today can't touch the passion of "Heaven's Missing An Angel." Those wails at the end? Hello, loins. The candlelit vibes of "I Wasn't Over You" are enough to make you call up your ex for some good ex-sex. Two decades in and 98 Degrees still got our temperatures rising. Burning up has never felt so good.